You are using an out of date browser. It may not display this or other websites correctly.
You should upgrade or use an alternative browser.
S

Question for tuners and vendors / builders. What is max "safe" torque at 3k, 3.5k and 4k ?? I see different turbo companies bragging about how fast spool and torque with X brand turbos. The majority of people are on stock rods so kind of pointless it seems. Meaning on stock internals, many of us dont need the crazy fast spool as many advertise and can go with XX brand instead that spools slower for a happier engine. So whats max torque as asked above ??
Reactions: Torgus

There is more to it. Remember, spool and lag are not the same thing. Spool is a function of rotordynamics, it's where in the RPM band you have enough system efficiency to make boost, which is torque, which is power (when considered at a given RPM). Lag is a time function, i.e. when do you make the power after you request it. I like the "time-to-torque" description, but really responsiveness is what we're describing. A dyno does NOT show lag. Let me repeat this. A dyno does not show lag.

While spool and lag are not the same thing, they are in bed with one another. Often times quick spooling turbos are low-lag. Conversely large turbos that don't spool until 5k rpm are never going to be responsive.

It is true in one sense if you just put a larger turbo on, and it doesn't spool until late in the RPM band you're not going to pretzel a rod as easily, but you're also completely ignoring the value of a responsive system. This is NOT important for drag racing with staging, launch control, NLS, etc. but it IS important if you actually drive your car on the street (or road course) and want something that doesn't feel like dopey is sweet talking your turbos into doing something when you push on the skinny pedal.

Smaller low-lag turbos that have boost intentionally brought in slower down low to save rods will still be much more responsive than a large turbo that gives you the same dyno curve through that RPM range. This is why we keep saying that the end-use turbo choice really depends on many factors, mods, fuel, transmission, end use, power goals, etc.

As for how much torque on stock rods, we've seen customer stock engines last quite a while rolling boost in a little slower to keep things about like this dyno example below, personally on my own motor I would go less aggressive: 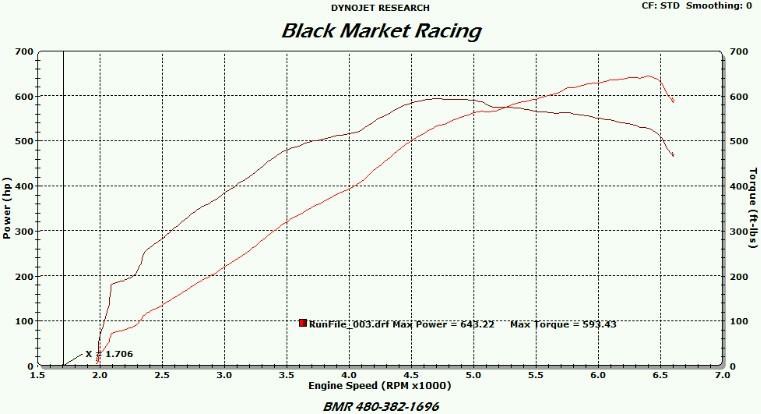 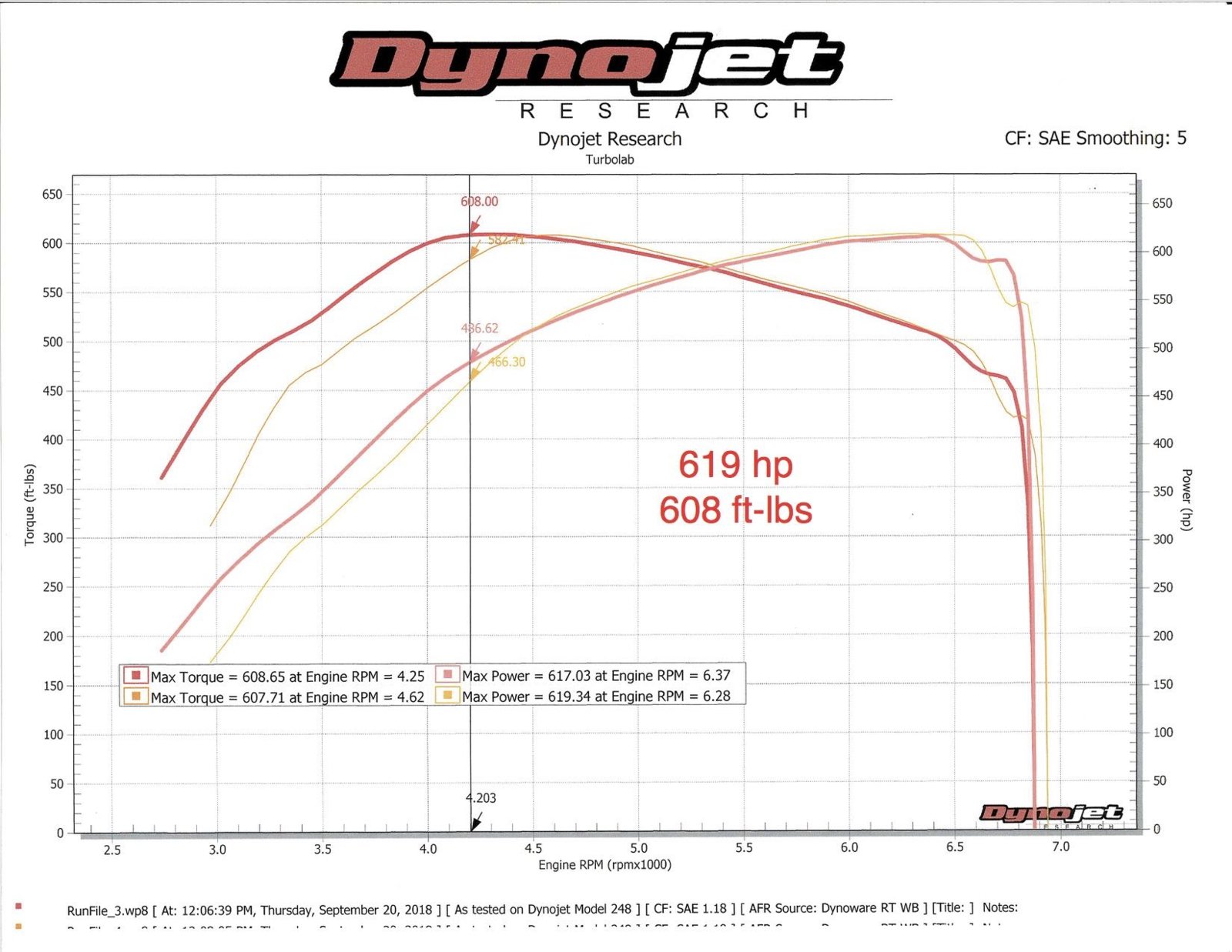 It's not going to last forever at those torque levels, I posted about the max I would run... but if you're going to run it, make sure it's running well -i.e. this isn't the place to be borderline on timing targets or running out of fuel. We've seen stock turbo cars bend rods with ridiculous timing targets, boost mountains, or severe misfires.

The issue you run into is you can't just tell your tuner I want to make under XXXHP at XXXXRPM. You would have to be on a dyno during tuning to do this accurately.

You can say I want to be at XXPSI and XXXtiming but it is more of a crap shoot as to what power you are really making at that RPM.

It is funny to me that people are coming to this realization after literally years of vendors touting that their twins were the best because of 'gobs of low end tq' as a major selling point over single turbos etc. Even to the point of showing dynos which would potentially bend stock rods, of course a word was never said about that
Last edited: Feb 18, 2019
Reactions: SlowE93
S

That was my point. Next, where can I get good axles ? Snapped mine yesterday on a 2nd gear pull.
Reactions: Jeffman and Torgus

SlowE93 said:
That was my point. Next, where can I get good axles ? Snapped mine yesterday on a 2nd gear pull.
Click to expand...

You can get replacements for cheap from eeuroparts or others by googling the part number.

Ordered the YCW / M factory. Now we wait till thursday or so ☹

SlowE93 said:
Ordered the YCW / M factory. Now we wait till thursday or so ☹
Click to expand...

Out of curiosity what made you go with them over DSS?
S

Torgus said:
Out of curiosity what made you go with them over DSS?
Click to expand...

No core needed. Ecs tuning had only 1 pair on the shelf that happened to fit my car and they were on sale. Couldnt pass up the deal. 700.00 shipped
Reactions: Torgus
S

Anyone else running these axles ?

SlowE93 said:
Anyone else running these axles ?
Click to expand...

Yes . Have them in mine after destroying an axle . Bolt in nicely/ easy . I am running pure stage 2's / PI / st3LFP/ E60 ./ Built Nizpro AT (billet shafts etc)
Reason I chose them over DSS , bearing carrier is better , billet smaller diameter shaft etc.
Reactions: SlowE93
S

Yeah, install was a breeze...
S

So back to topic, anyone else ? Whats max torque to make at 3k, 3.5k, and 4k ? Or share dyno sheets and some info on how long motor has lasted ? Where would most like to see PEAK torque in the powerband for a stock internal ?
S

The earlier you see peak torque the faster you will have issues. Each motor will handle different amounts of abuse depending on age and maintenance

I think this might have a dozen different answers that all might be accurate just depending on who you asked.

When you view the vehicle as a wear item, something that will eventually wear out and doesn't last forever, the most important question should be, how long do you want the vehicle to last.
Reactions: saskatchewan135
S

saskatchewan135 said:
The earlier you see peak torque the faster you will have issues. Each motor will handle different amounts of abuse depending on age and maintenance
Click to expand...

That is understood. But taking maintenance and mileage out of the equation, the question SIMPLY remains, how much torque is TOO much torque for a stock internal N54 and at what rpm ?? Say 550 at 3.5 k and climbing to peak 620 at 5200 for example. Peak SHOULD be ok at that point, but is 550 at 3.5k ramping up too soon ? Or is 620lb ft too much regardless of rpm for stock internal N54 ?
There has to be a point that tuners try and avoid for longevity/reputation/and overall customer satisfaction ???
S

doublespaces said:
I think this might have a dozen different answers that all might be accurate just depending on who you asked.

When you view the vehicle as a wear item, something that will eventually wear out and doesn't last forever, the most important question should be, how long do you want the vehicle to last.
Click to expand...

I understand there are variables. How about this , what realistically would be a recipe for disaster as far as torque vs stock rods ? Chris already gave his take on the dyno I grabbed off the net. Any others have opinions regarding that dyno sheet ?? As I did some digging, I believe that dyno is stock internals and professionally tuned by a reputable tuner.

European, based in China

Whereas I do not know what a "safe" or "reasonable" limit is for the N54, I do want to somewhat comfirm that it is possible to tune a smaller turbo to "hold back" at lower rpm, and get the best of both words (ie low lag + low wear). At least I am pretty excited about what my tuner is doing with my car. I believe you actually have to do this on DCT cars to keep the clutches happy.

Here's a virtual dyno plot from a pull I did today slightly up hill. 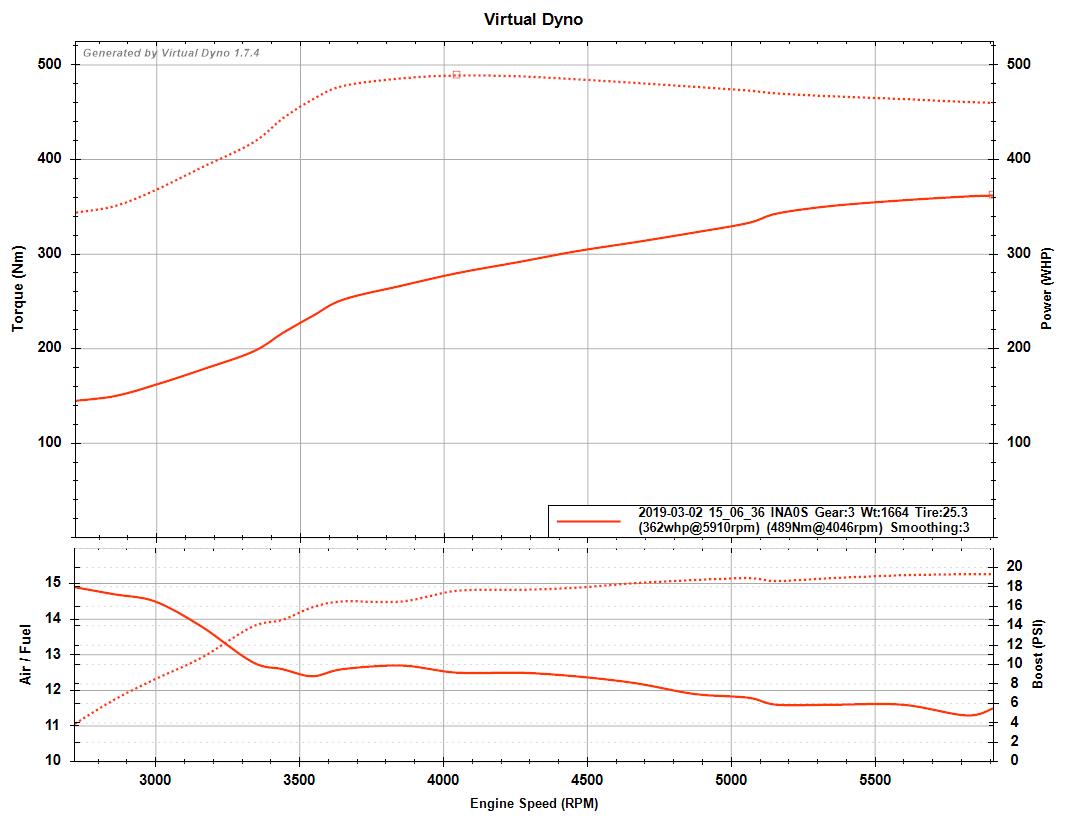 Here's the torque projection from MHD: