Many of you know about the Pro Tool app by @BimmerGeeks! and the optional Bluetooth OBD2 dongle that can be purchased with it.

This thread will serve as a centralized place to provide feedback, gather information, and ask questions.

Several weeks ago I was lucky enough to be offered the opportunity to mail a spare phone down to Dylan. After a couple signatures, he sent it back with Pro Tools loaded up and a prototype Bluetooth dongle.

After having used it for a few things here and there, I strongly believe this will be my main, go to app for my car. I like to monitor gauges on my Android screen and constantly datalog, this will allow me to do both of those things wirelessly and also have the diagnostic and programming power all in one spot. 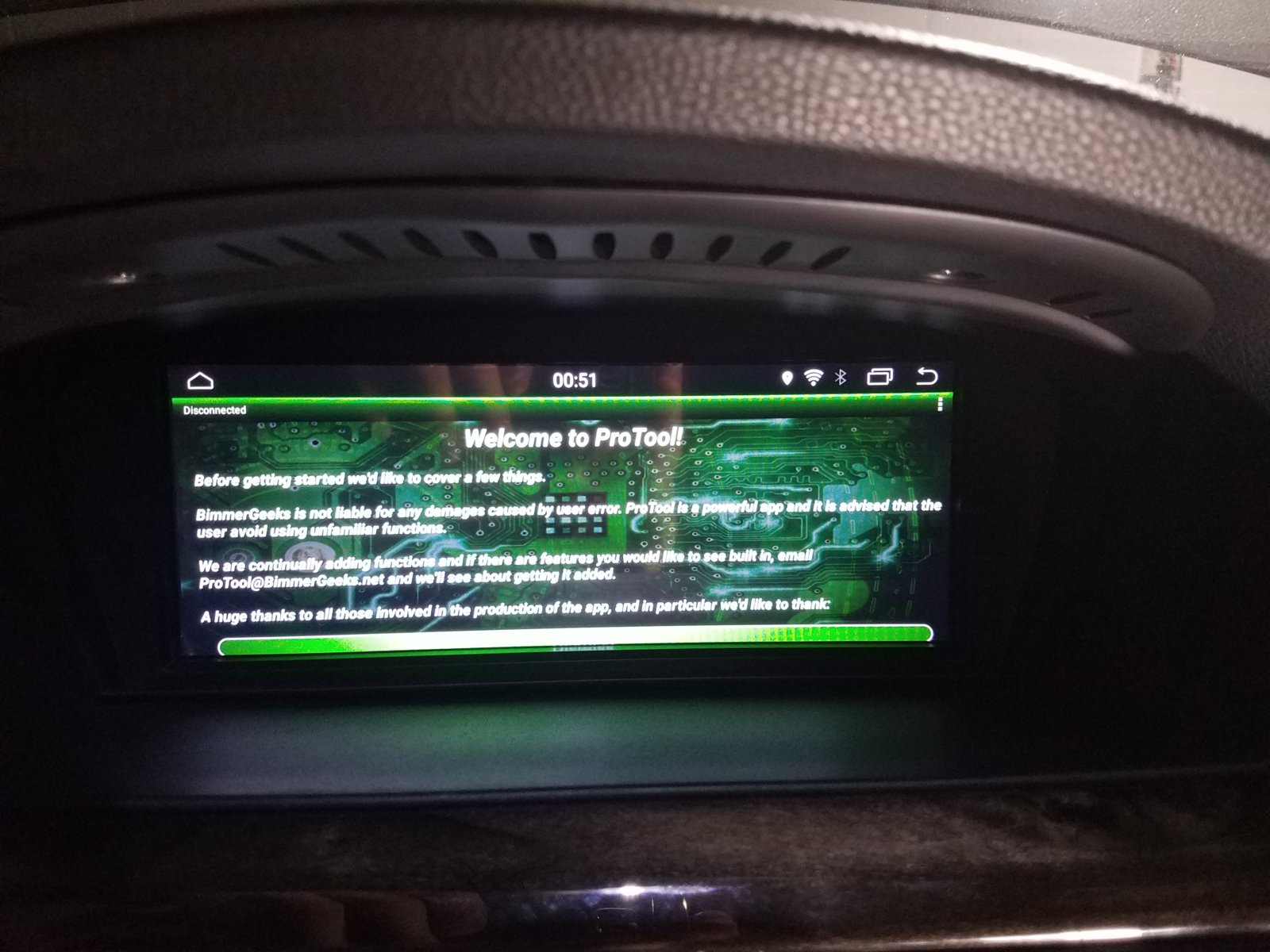 doublespaces said:
Many of you know about the Pro Tool app by @BimmerGeeks! and the optional Bluetooth OBD2 dongle that can be purchased with it.
Click to expand...

Has it launched? I can't find it yet.

Looking forward to being a beta guinea pig!

Public release should be live:

If you are searching it, make sure you type "ProTool" a compound singular word. Adding an 's' to the end or making it "pro tool" didn't seem to work in my experience.
Reactions: soawesomeman and Jeffman

Just downloaded it. Can't wait to try it out.
F

was fortunate enough to get a copy last week, i needed to code my new injectors..used a cable for that because my BT adapter was just ordered. worked absolutely perfectly. Have to admit, im not a huge fan of the interface, i feel like it's a bit clunky, but there is a LOT you can do with it.. great for tinkerers. got the bluetooth adapter last night, so i plugged it in and paired it with my phone and went for a drive, gauges i tested worked perfectly...no lag at all, very occasional stutters. only issue i'm having right now, is how the hell do i pair the bluetooth adapter to my tablet, after pairing it to my phone? I don't want to use my phone, it was just a test because apparently the nexus 5x doesn't support USB OTG (if it does, it doesn't work for me...same cable works fine on my samsung) so i wanted to see protool on the phone sized screen.

anyone have any ideas? i tried unpairing the device from my phone, but it doesn't come up in a scan with my tablet (cheap-o Samsung galaxy tab A) or my iPhone, my assumption is because it's already paired to the Nexus? i dunno.

Will this only work with their BT adapter?

9krpmrx8 said:
Will this only work with their BT adapter?
Click to expand...

Negative, it will also work with a K+DCAN and USB OTG.
Reactions: Jeffman

No I mean will it work with any brand BT monitor?

9krpmrx8 said:
No I mean will it work with any brand BT monitor?
Click to expand...

Gotcha, I do believe it may be proprietary but I’m not entirely sure.

Their page states it runs at 2x the speed of normal BT adapaters and is compatible with other software. As far as backwards compatibility it’s rather vague.

9krpmrx8 said:
No I mean will it work with any brand BT monitor?
Click to expand...

No. The problem is that normal Bluetooth adapters do not support the types of comminication that is needed for apps like MHD and ProTool.

This adapter must have a custom firmware which makes it possible. Otherwise we would be using generic Bluetooth obd adapters long ago. This was explained to me once but I forgot the technical answer.
Reactions: 9krpmrx8

Ace718 said:
Negative, it will also work with a K+DCAN and USB OTG.
Click to expand...

This is great for me as I have my K+DCAN cable routed inside up the left side of the dashboard and peeking out with the OTG connector just above the left drivers’ air vent where I mounted my Android phone for MHD. Looking forward to using ProTools.

Can someone net out why I should want to buy this? I suspect many are in the same boat.

I don't know what some of those can do so i can't help much.

Personally I'm going to use this app with the Bluetooth then pull out my cable when I flash. Unless something better comes along. Mostly i just want to monitor and log without cables.
Reactions: dyezak

Honestly the cable is a shit solution, best as I can tell. How many mediocre connections do we have? MHD really needs to go BT as that's a liability problem when programming. Everyone runs around with a gerryrigged tablet/phone with cable snaking around to OTG, crap popping out, et cetera. One can only hope ...

doublespaces said:
I don't know what some of those can do so i can't help much.

Personally I'm going to use this app with the Bluetooth then pull out my cable when I flash. Unless something better comes along. Mostly i just want to monitor and log without cables.
Click to expand...

^^^THIS!! Monitoring and logging without cables is where it is at. With an AVIN it would be *really* nice to have an auto-log feature. Once you start your car up it creates a running log that lasts for like 30min and continuously overwrites itself. THEN add on a one click upload feature to your DataZap.ME account....wow. This opens up tons of possibilities.

How do I add requests to the development queue?
Reactions: Jeffman and soawesomeman

I agree with total wireless being the best solution. And it being integrated with something like the AVIN head unit to even avoid he need for charging cables would also be ideal. For now, I have my little OTG peeking out from the driver side vent.
You must log in or register to reply here.

What to do while the head is off?

Before choose tuner, read me or get cheated. DocVu etuning process and result sharing