My car originated from the factory as a "no-line" car and lacked any fog lamps what so ever. This has been a long put off retrofit as frankly it wasn't that important to me, and because it was too damn hot outside. For the last 4 months or so I've had fancy pants LED foglamps in my MSport bumper that were non-op.

This morning the weather was mid 60's so I decided to go ahead and complete it.

First off this isn't really for anyone going from halogen to LED fogs, this is for those of us devoid of fog lamps at all. 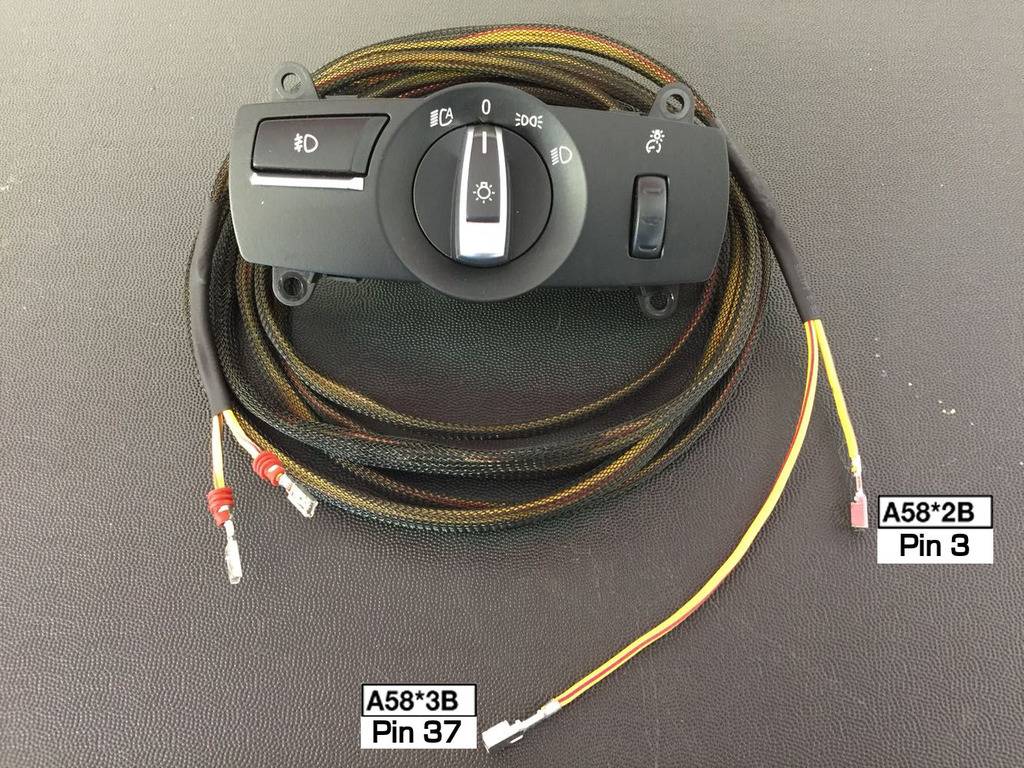 My solution was pretty straight forward. I removed donor wiring from a wrecked F10 at a salvage yard and set everything aside. Since these 2 wires were separated from the main harness I wrapped them with techflex and sealed each end with adhesive heat shrink for a nice finished look. All of the major body wiring on the drivers side passes through the firewall in a large bundle with an injection molded polyurethane foam grommet.

Usually BMW specifies a rubber grommet that can easily have wiring added/passed through it. The molded polyurethane grommet in very dense and resistant to puncture. When looking from the inside there is a divot that looked like a swell place to punch a hole through.

I used a sharp straight instrument to punch a pilot hole through the foam polyurethane, and wiggled side to side to feel for metal or wiring. Once satisfied I used a 1/4" drill bit to make a clean opening through the dense foam. 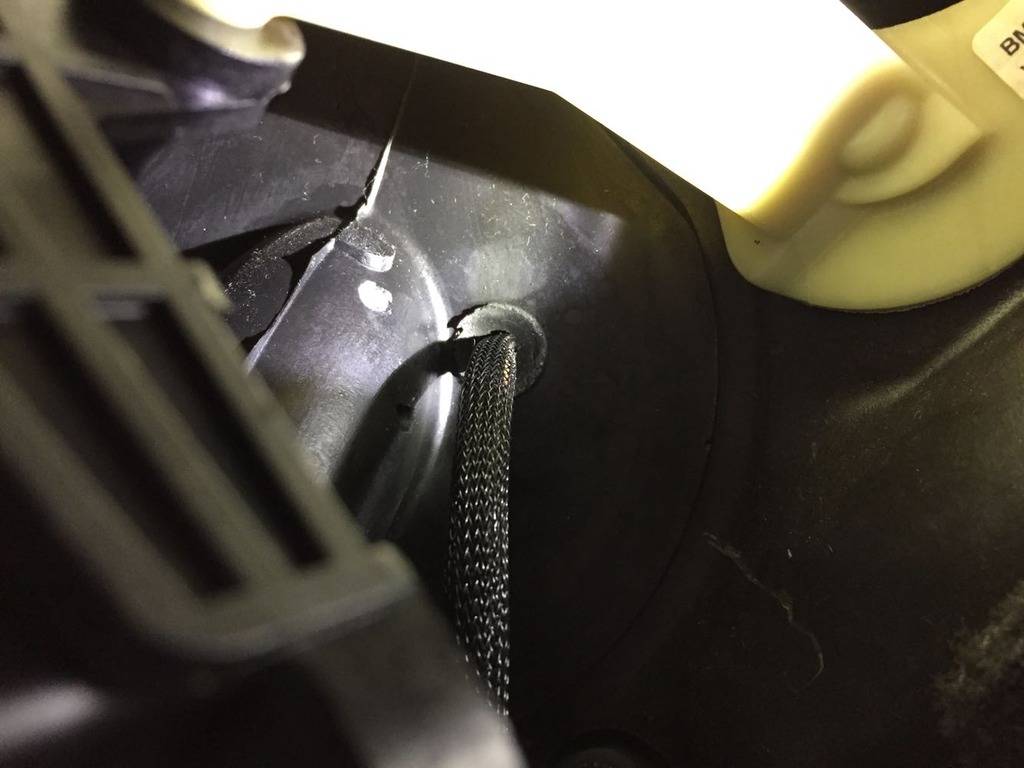 Once you pull the wiring carefully through the hole you've made you need to connect each lead to the FRM (footwell module) that controls the fog lamps. A58*3B and A58*2B connectors are physically near identical so make sure you populate the correct colored wire into the correct socket. There are multiple empty sockets so if you don't pay attention there is a possibility for problems there. 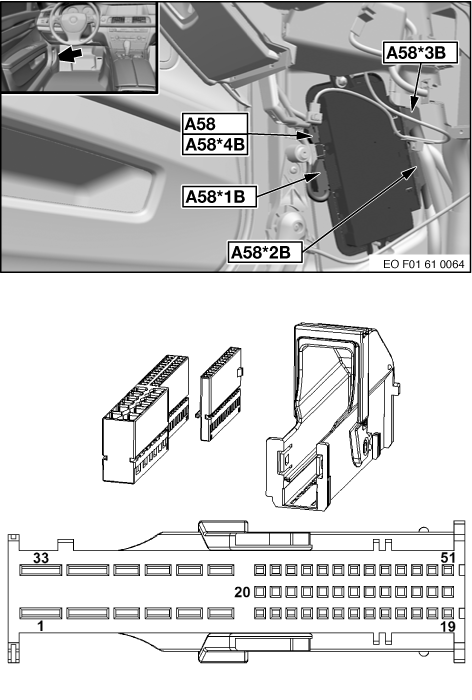 Replace the drivers underdash paneling, knee airbag and then move out to the engine bay.

Here you'll run the wiring down the drivers side inner structure along the path of the hood release cable, in front of the coolant expansion tank, and down to the X149*1B connector for the front bumper harness. Remove the silicone plugs and click the female fog lamp wiring into place. Which socket you use isn't important there are only 2. Just make sure the wiring colors match on either side of the X149*1B.. 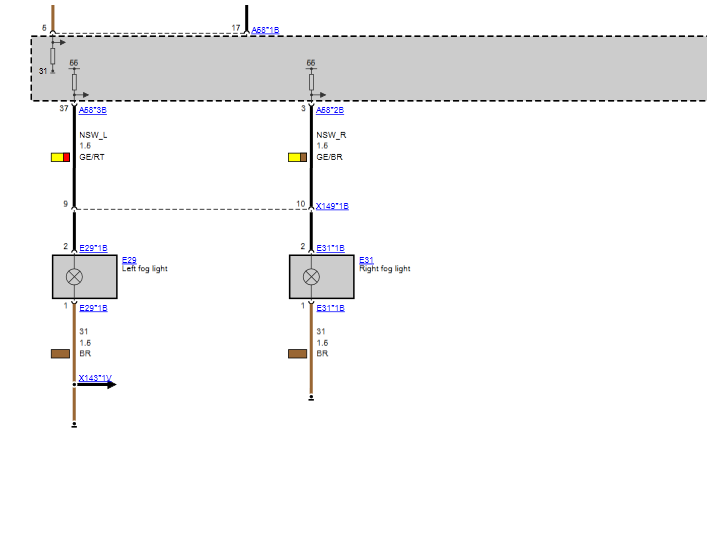 Here is the X149*1B connector on the bumper harness side, that I previously added the wiring to when I had the front bumper off 4 months ago. Again it doesn't matter which one of the two wires goes in which socket so long as the color is the same as it passes through the connector block. 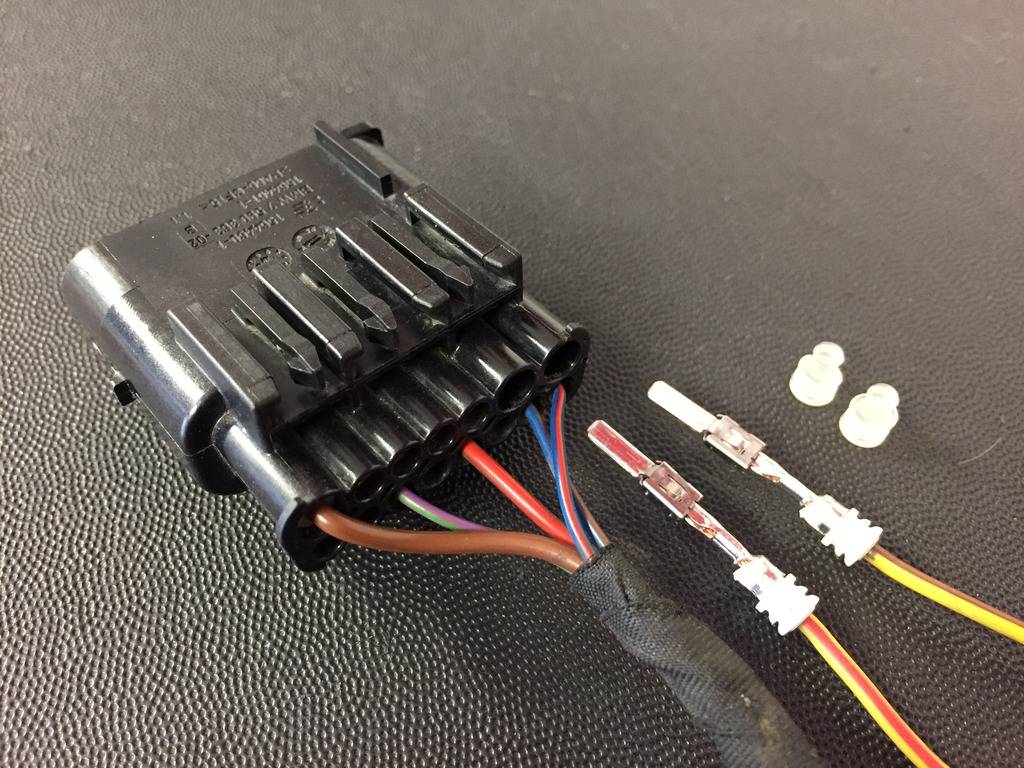 With all of that buttoned up I swapped out the headlamp switch with the fog lamp equipped one, which is done by pulling the wood trim panel free my hand and 4 T20 screws holding the switch to the trim. Connectors are the same and require no modification.

All that is left is to code 5A1 to the VO. I am for the moment holding off on that because I thought out of curiosity I would test the fog lamps first. They power right on with the button press and I don't get any iDrive or Kombi messages complaining about the fog lamps. Will report back on that and code as needed.

Did a test run to verify operation after night fall and found about 5 minutes or so after turning on the LED lamps started to flicker. Looked like VO coding for the LED lamps is definitely required. Interesting how the FRM works to power the fog lamps even though the car doesn't have any fog lamps by the VO.

For those without access to a donor vehicle for the wiring:

It includes the connector hosing, crimpable terminals, and silicone seals. 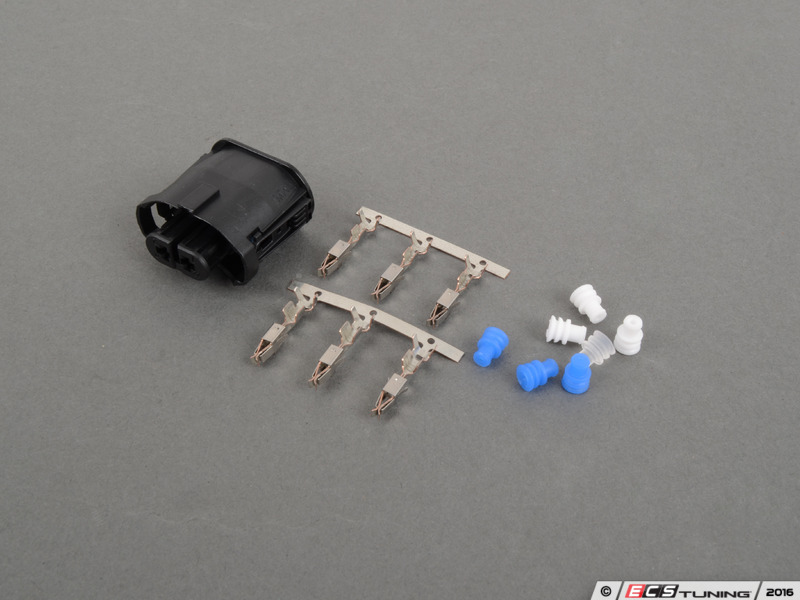 If you are making your own harness you can bypass the X149 connector entirely if you want. Its just a union under the drivers headlamp so the bumper can be removed more easily without unplugging the PDC sensors etc.

The pins that go to the FRM are not the same size but are of similar construction. I think the correct BMW PN for those is 61138364834
Reactions: doublespaces

These little nuggets of information are invaluable!
You must log in or register to reply here.

Fuel rail pressure sensor wiring? Can someone identify the wires for me?