OK I lied.....it's never been my daily but I haven't driven it much in the past 3 years so decided to turn it into a dedicated track car. I needed a hobby anyway lol.

Background
Bought the car in 2012 and went full bolt ons over the next few years. Last year is when I decided to take it the next step further and go single turbo. Now at this point I had no intention on this being a dedicated drag car. It was meant to see a track day every now and then but still beat the piss out of it on the way to cars and coffee or something and not care if it broke. Well, started the single turbo conversion then work got crazy so never finished it and just sat on the lift for 6 months. Fast forward to the present. Had a phone call with a shop that does quite a bit of Time Attack/NASA, etc builds regarding my intentions with the car. We started laying out a plan and well, here I am. I drop the car off in about a month and it'll probably be there for a little over a month getting some things done that I either don't want to do or can't do. Maiden voyage is SCT Joliet, IL in May but we'll see. Scope creep is already happening with this build and I haven't even dropped the car off lol. He's currently working on a badass Time Attack E90 right now. His mentality is either do it right the first time or don't do it at all, and I accept that. Google "WTCC Widebody Time Attack E90" to see what I mean.

Goal for the car is to be a dedicated drag car and take the 6MT as far as possible. MHD for now and possibly standalone in the future. Built motor at some point in the future. Goal weight without me in it is 2700 lbs with the cage. I don't think it's possible with my current weight reduction so I may need to gut the doors, lexan windows, and a few other clever tricks. I think with the right setup 9's is definitely possible, but we'll find out I guess. It's been said this isn't at all possible in a 6MT but I'm going to take a crack at it. I like a good challenge. Will be attending plenty of SCT's this year so we'll see.

You'll probably see a lot more updates on my IG account, but I'll try to keep this thread updated as much as I can.

Mod List
Here's the major stuff worth noting. Doesn't include all the maintenance items I replaced. If I knew when I started the ST conversion that this would turn into a dedicated drag car I would have gone another route with a few items.

Suspension/Brakes/Wheels
Suspension info coming when I figure out what I want. Likely switch to full spherical bearings and custom coilover setup with custom valving

Pic before I started the ST conversion 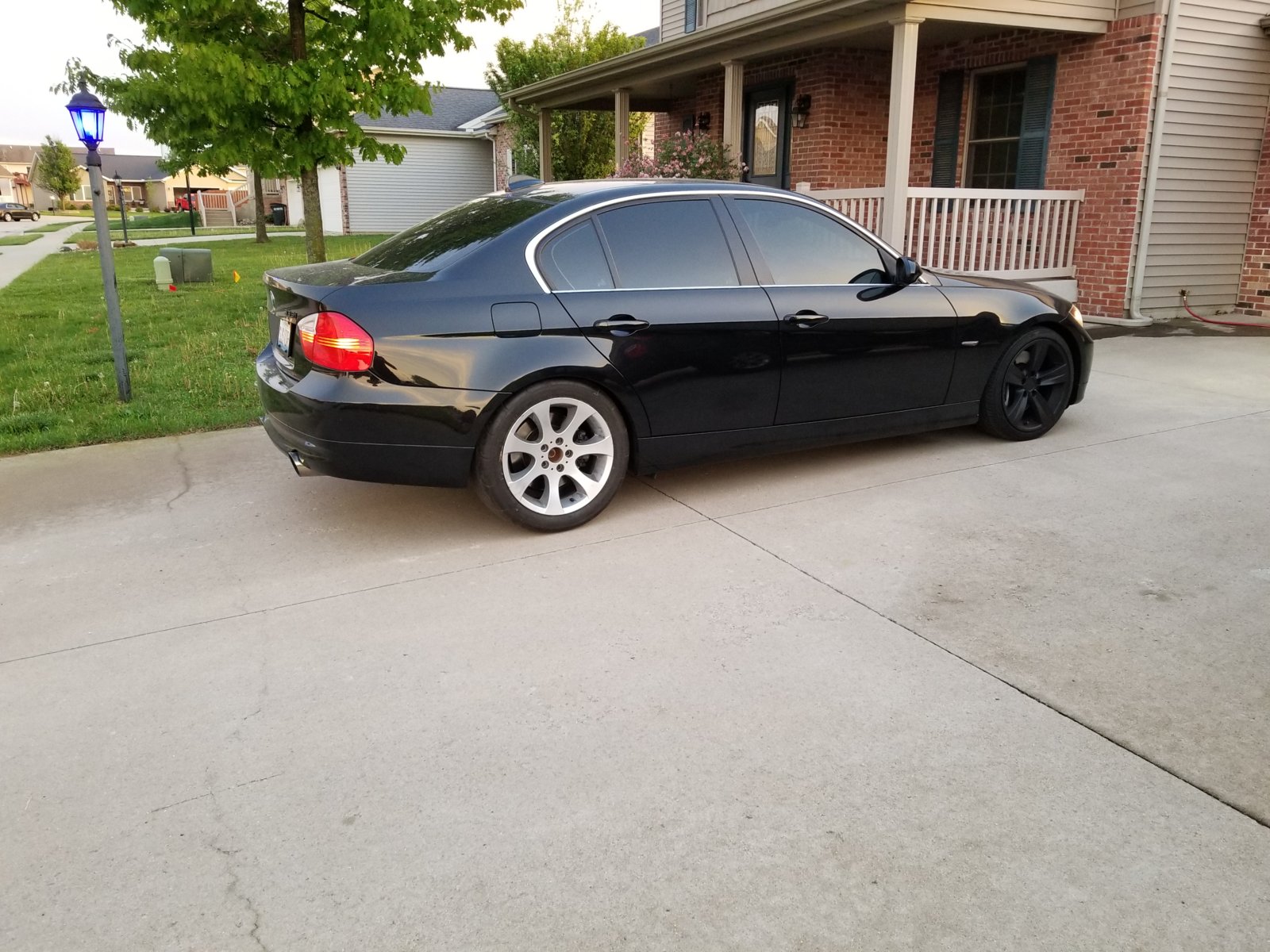 Bought a car lift and installed it myself just for this build. Hell to the naw was I going to do this on the ground. 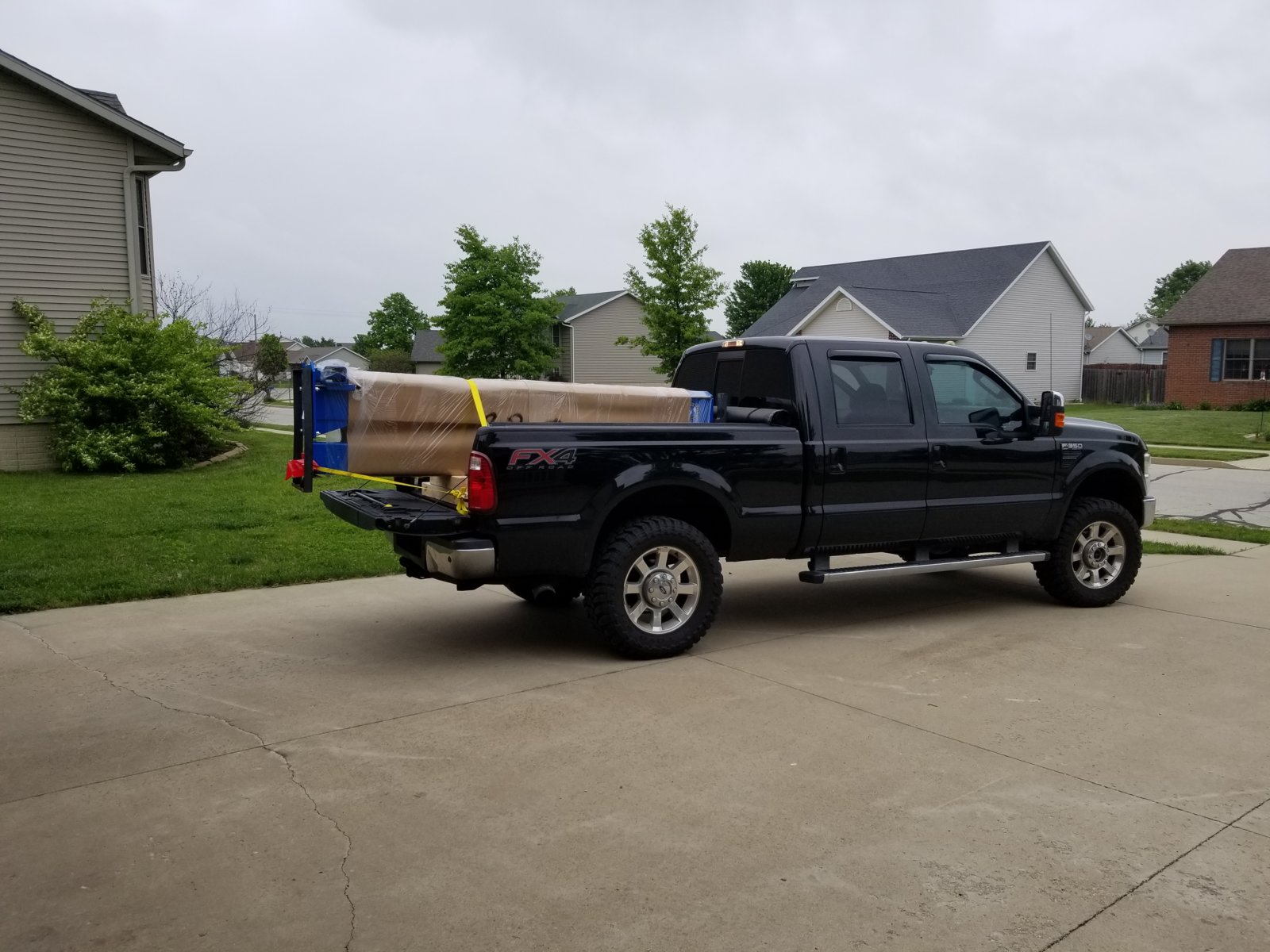 Sitting pretty. Unfortunately with stripping out the interior my garage doesn't look near this nice anymore . I just moved into this house 3 weeks prior. 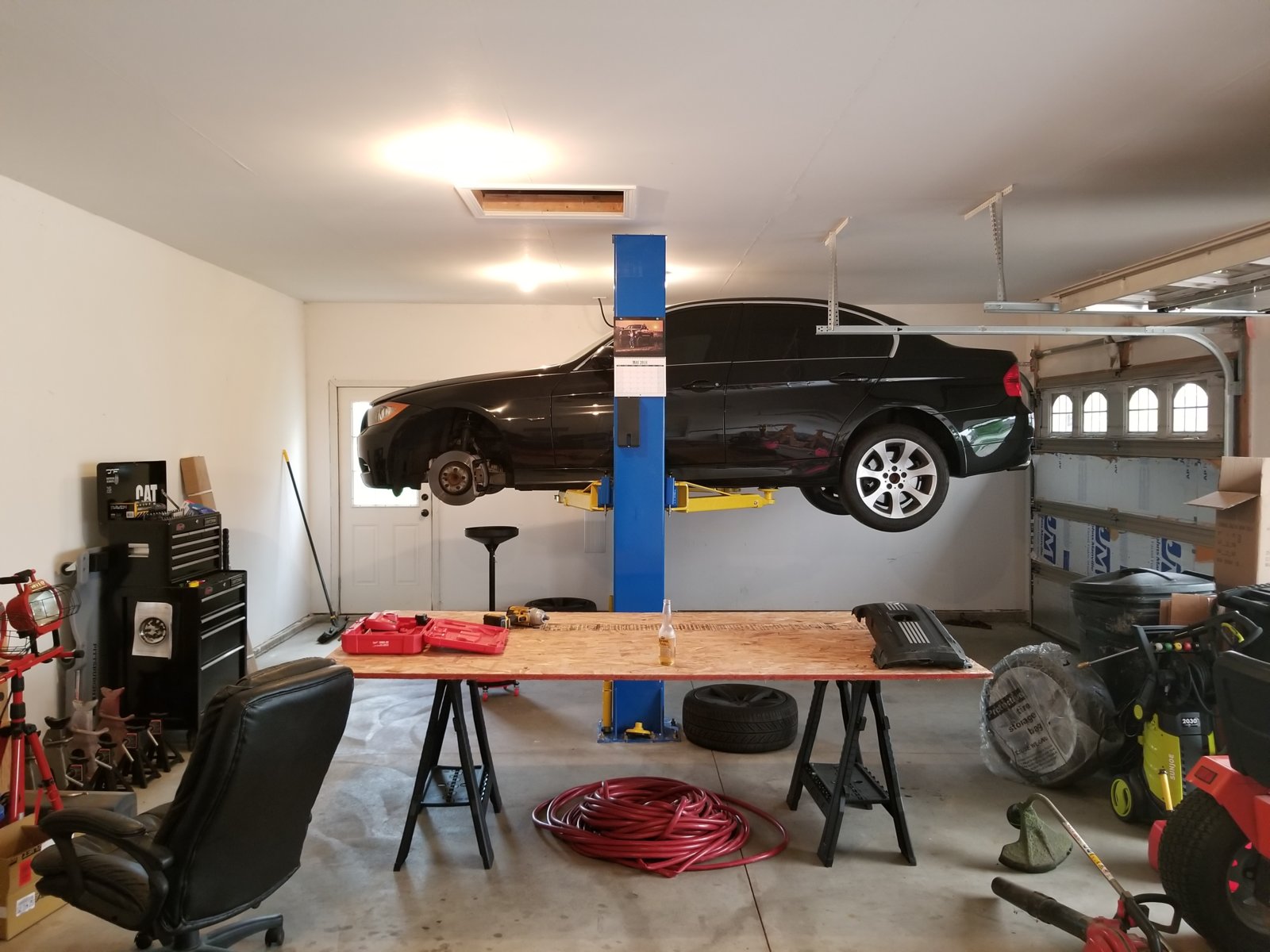 Came home from work and the DocRace kit was sitting patiently for me. UPS was suppose to leave it in the garage....I was so pissed. 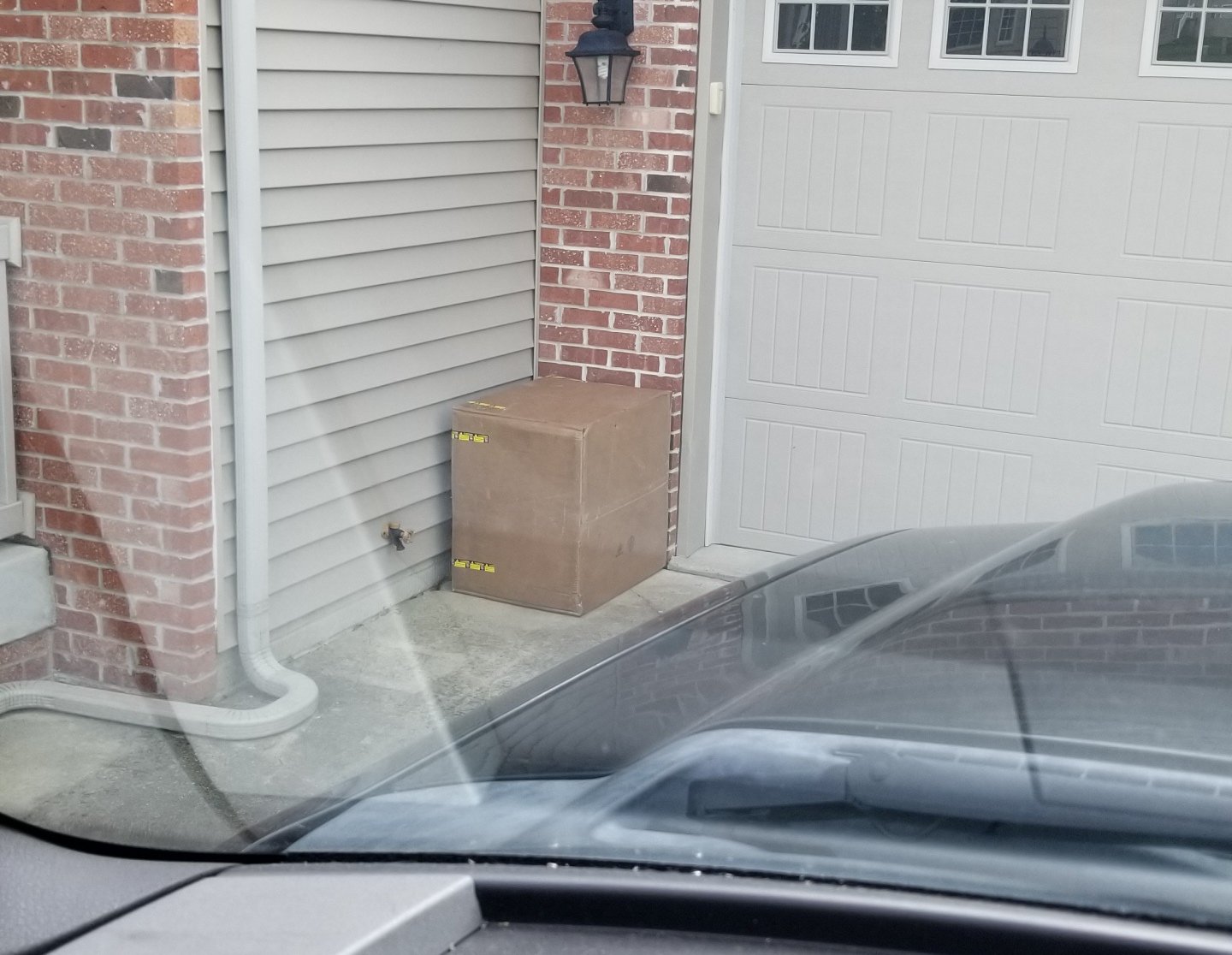 All of the parts when I started the build. Things escalated quickly after this..... 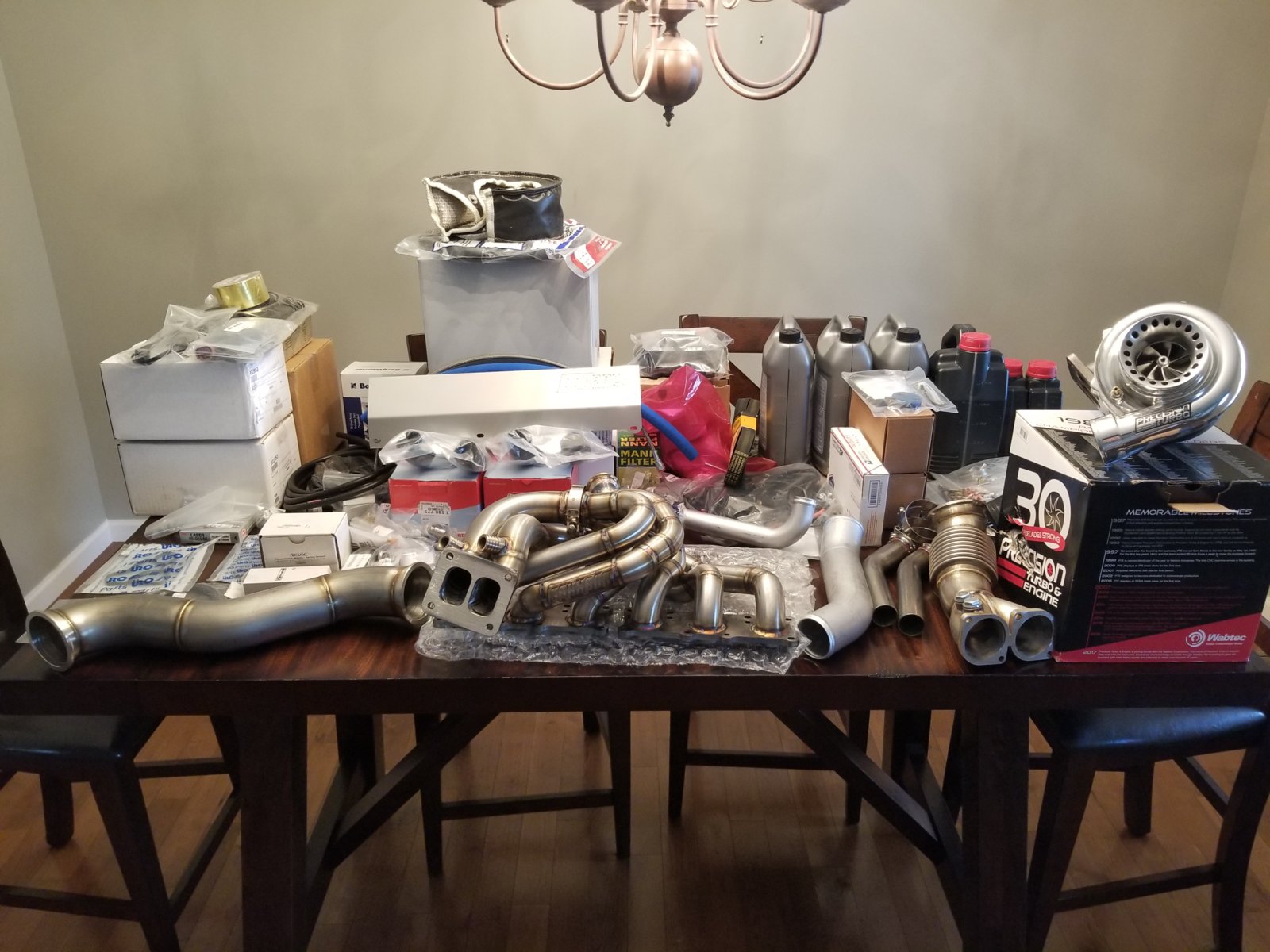 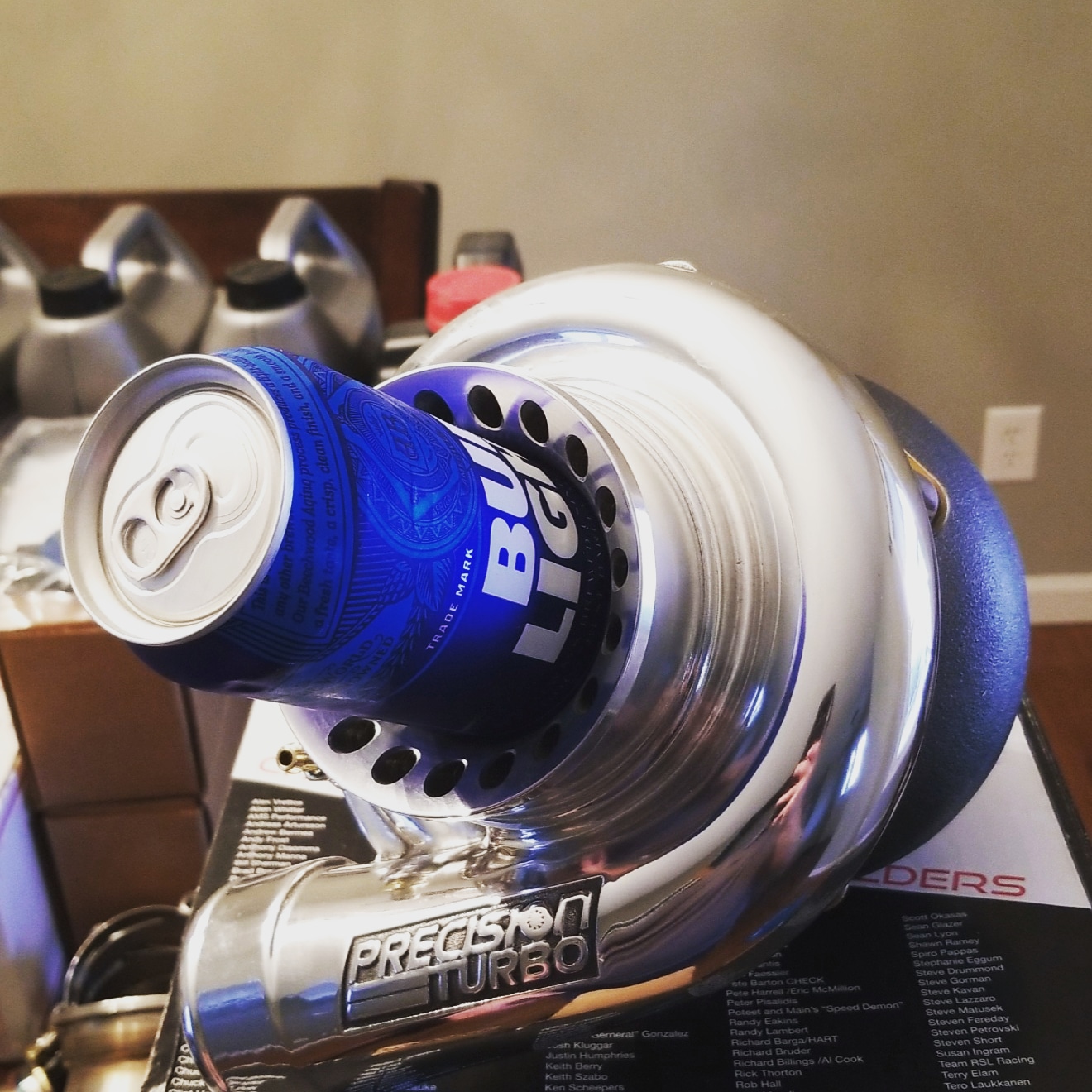 How she looked as of summer 2018. Honestly, if I new I was going to go dedicated drag car I wouldn't have gone with the DocRace kit. I would have done something custom. For the price of the kit I expected fitment to be a little bit better. The turbo was resting on the shock tower even with new OEM engine mounts. Had to order Turner Motorsports solid mounts which actually raised the engine a few mm. I would have tucked the turbo down in the headlight. 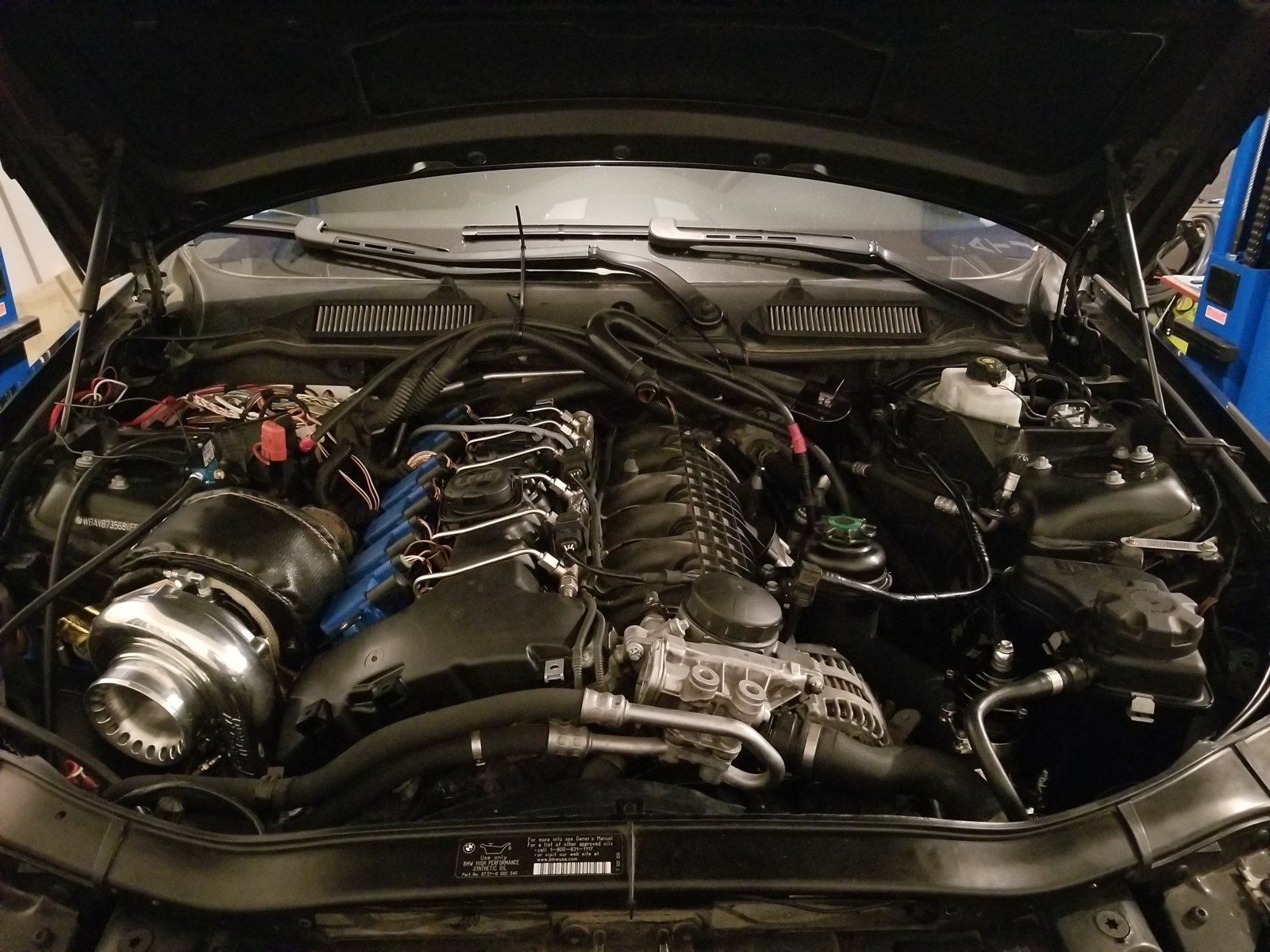 Picked up some bias ply front and rears. Waiting on my Weld fronts. It's a 6 week lead time and it's been 6 weeks so should be any day now. 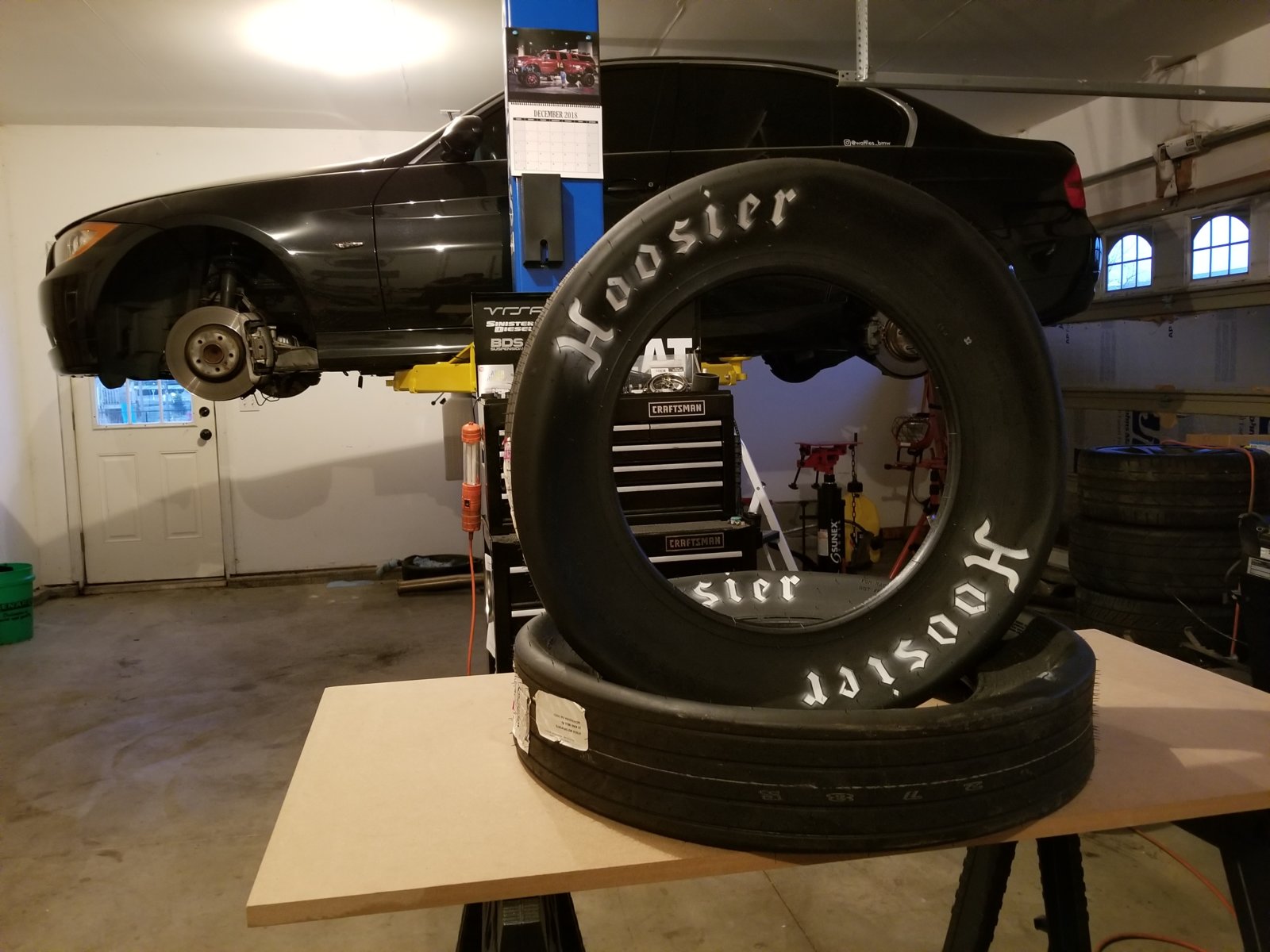 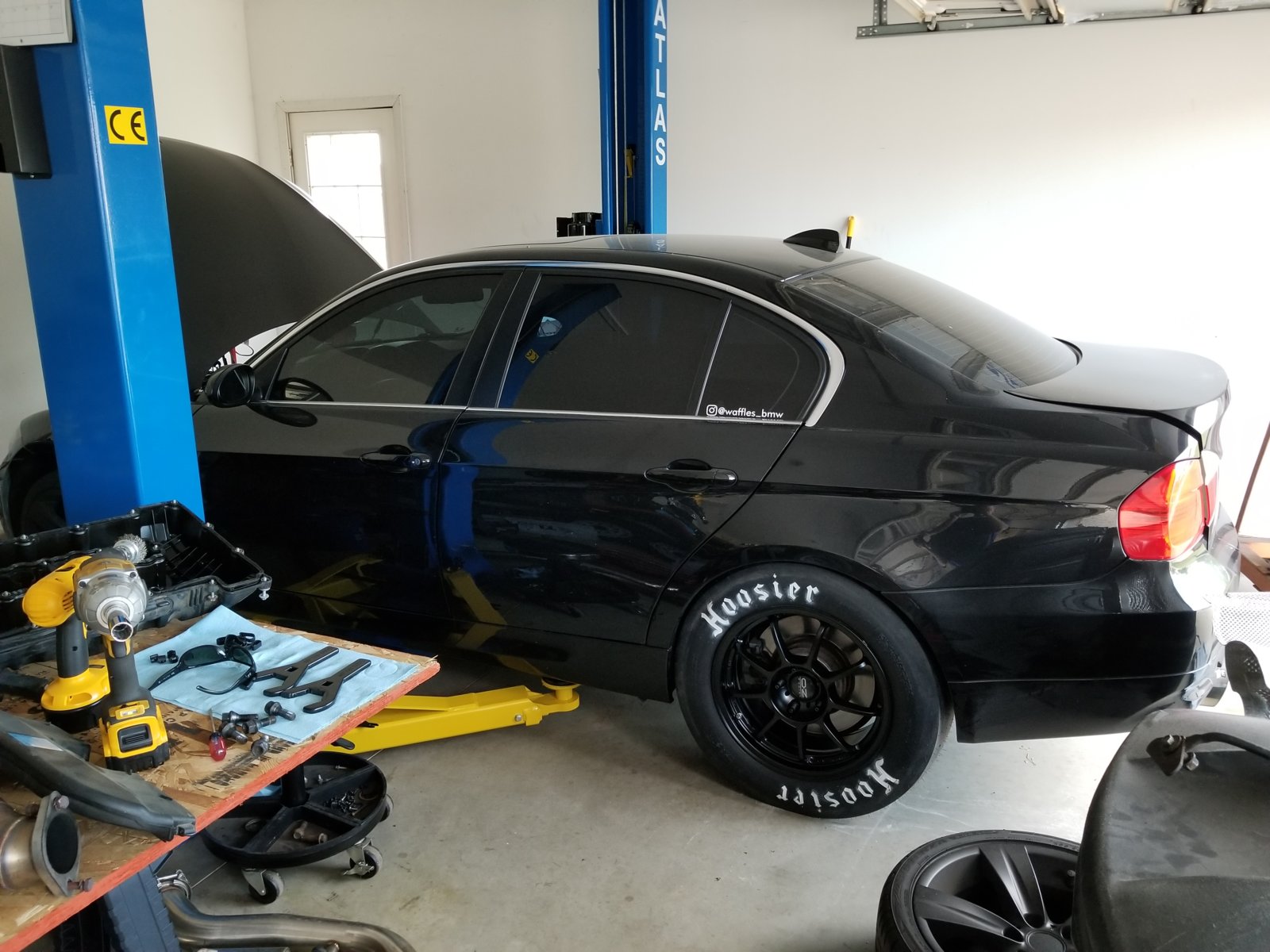 MFactory LSD. I really ought to do the 8.8 conversion. I'm expecting to snap the stock axles at my first outing since I'll have bias ply's and a suspension setup for drag racing. Also need to do more research matching gear ratio to the engine. I just went with the OEM 3.08. NOTE: Trans mounts are with old poly mounts. Went solid bcracecar. 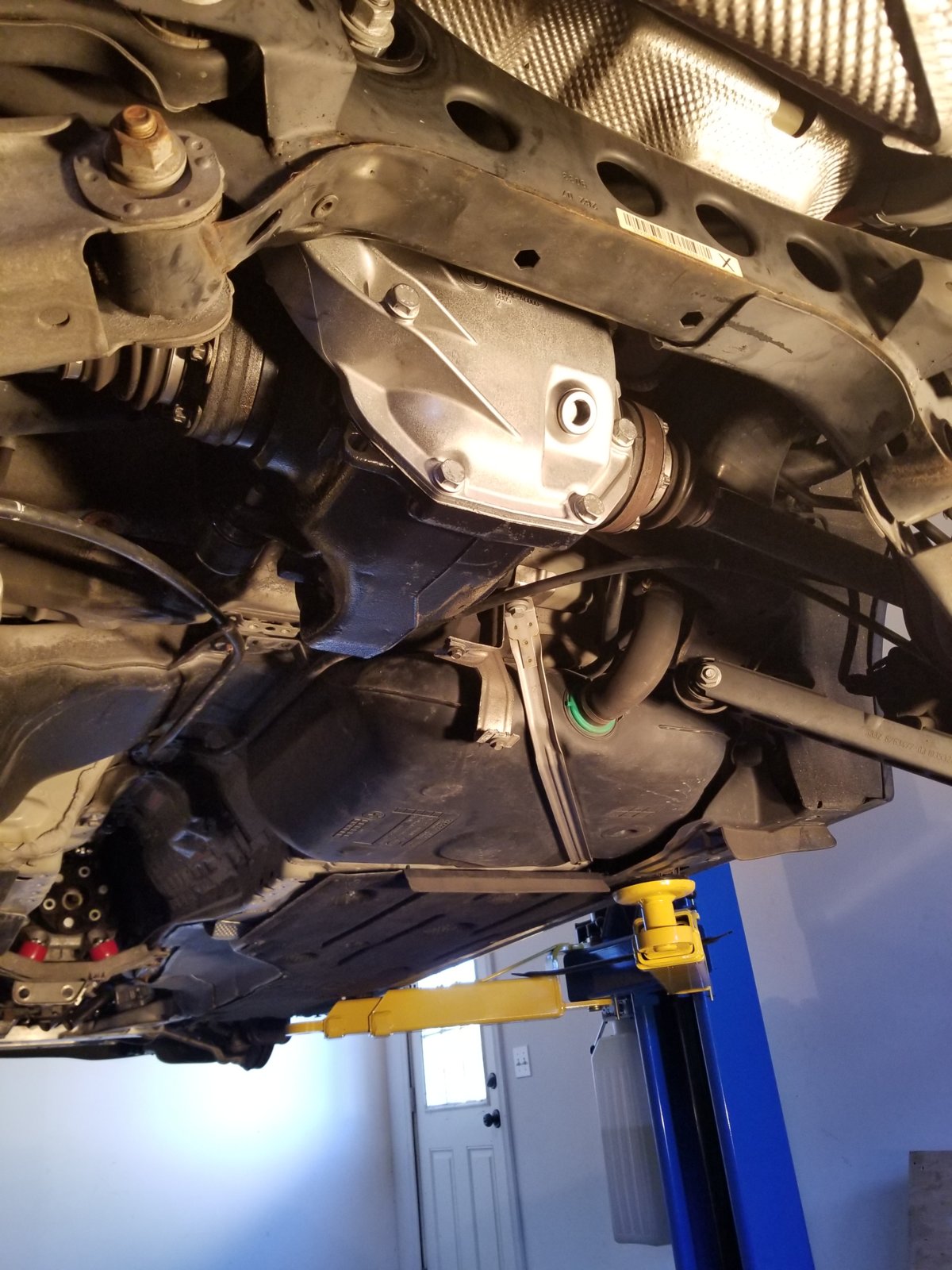 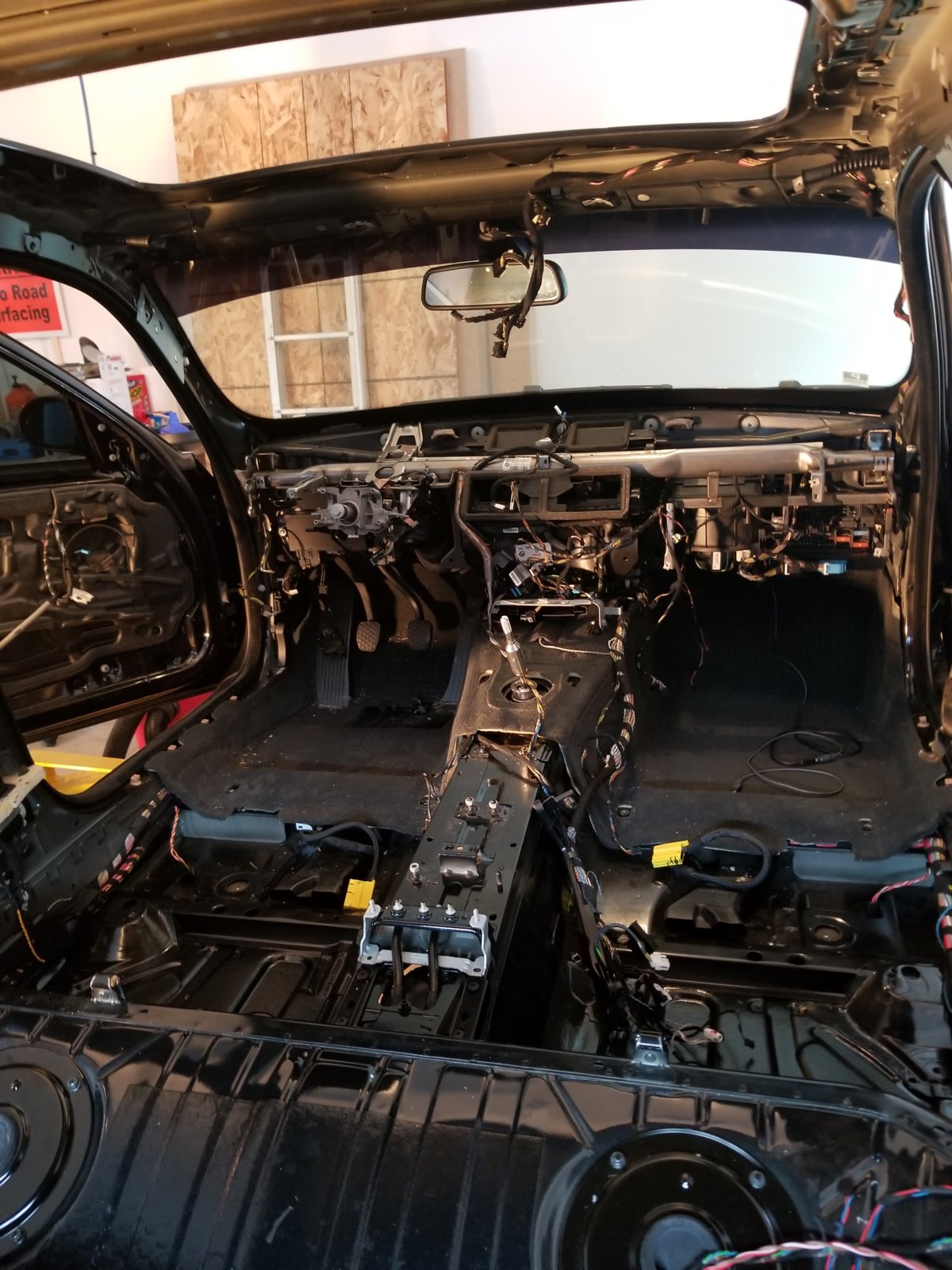 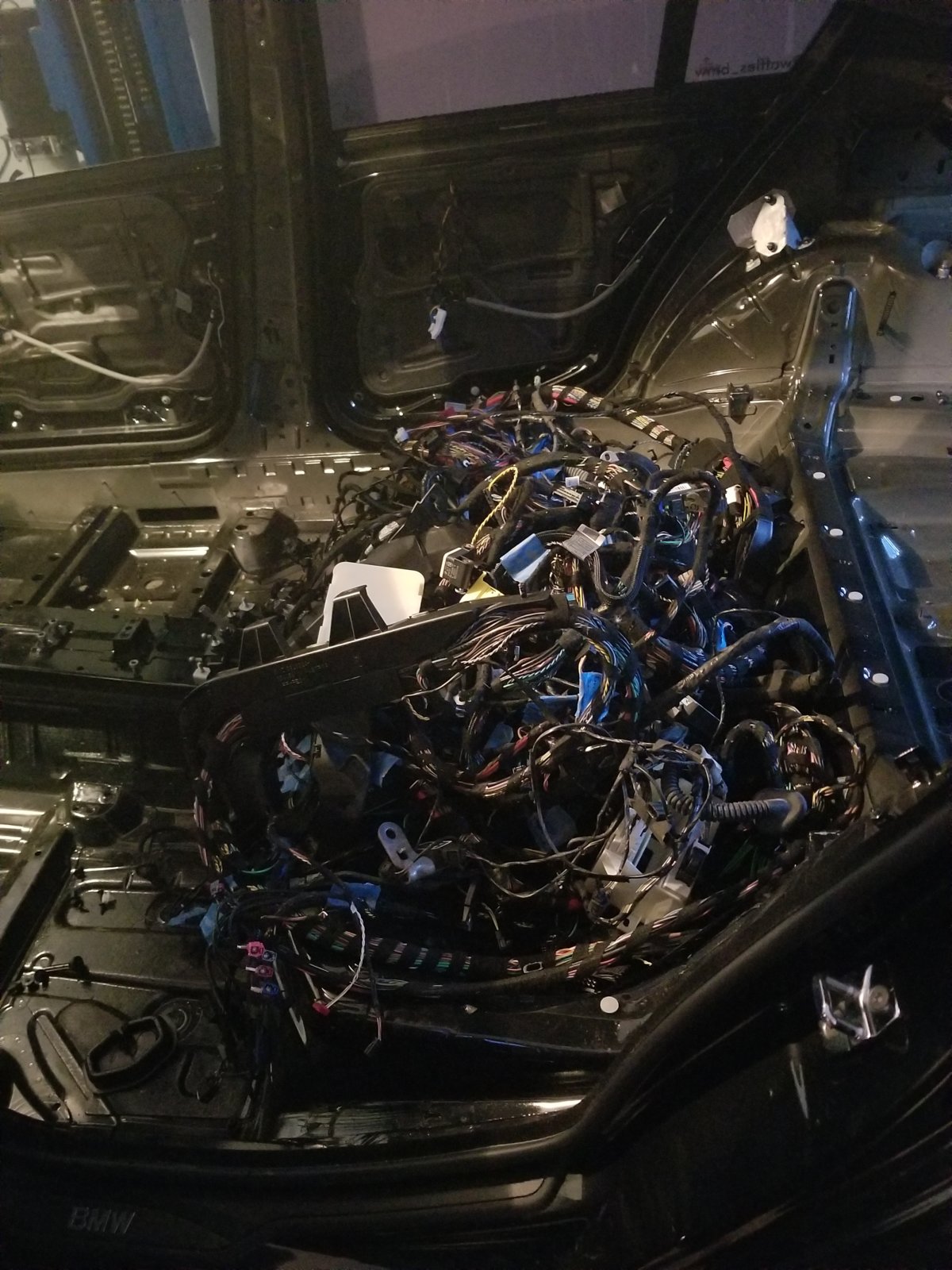 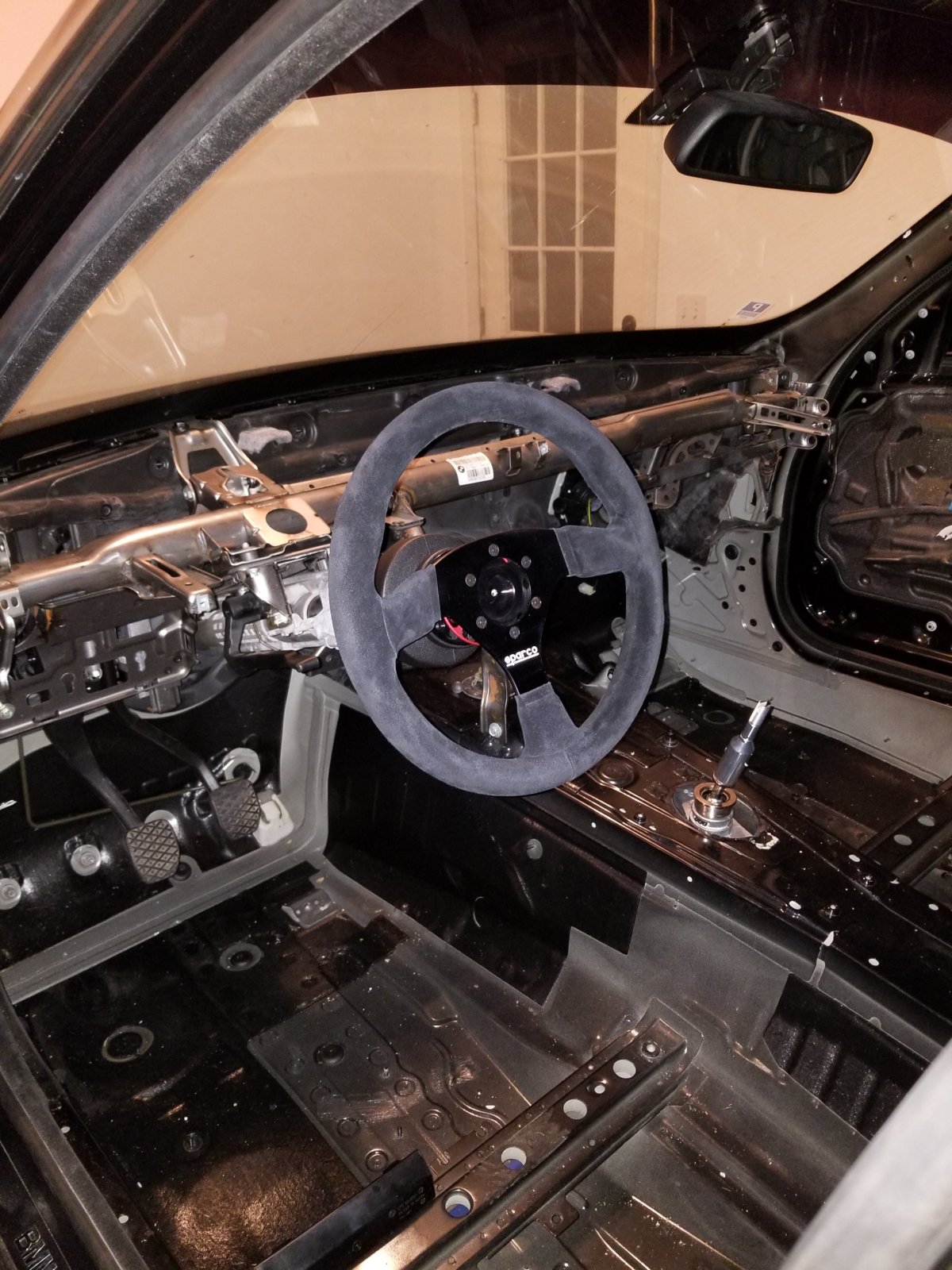 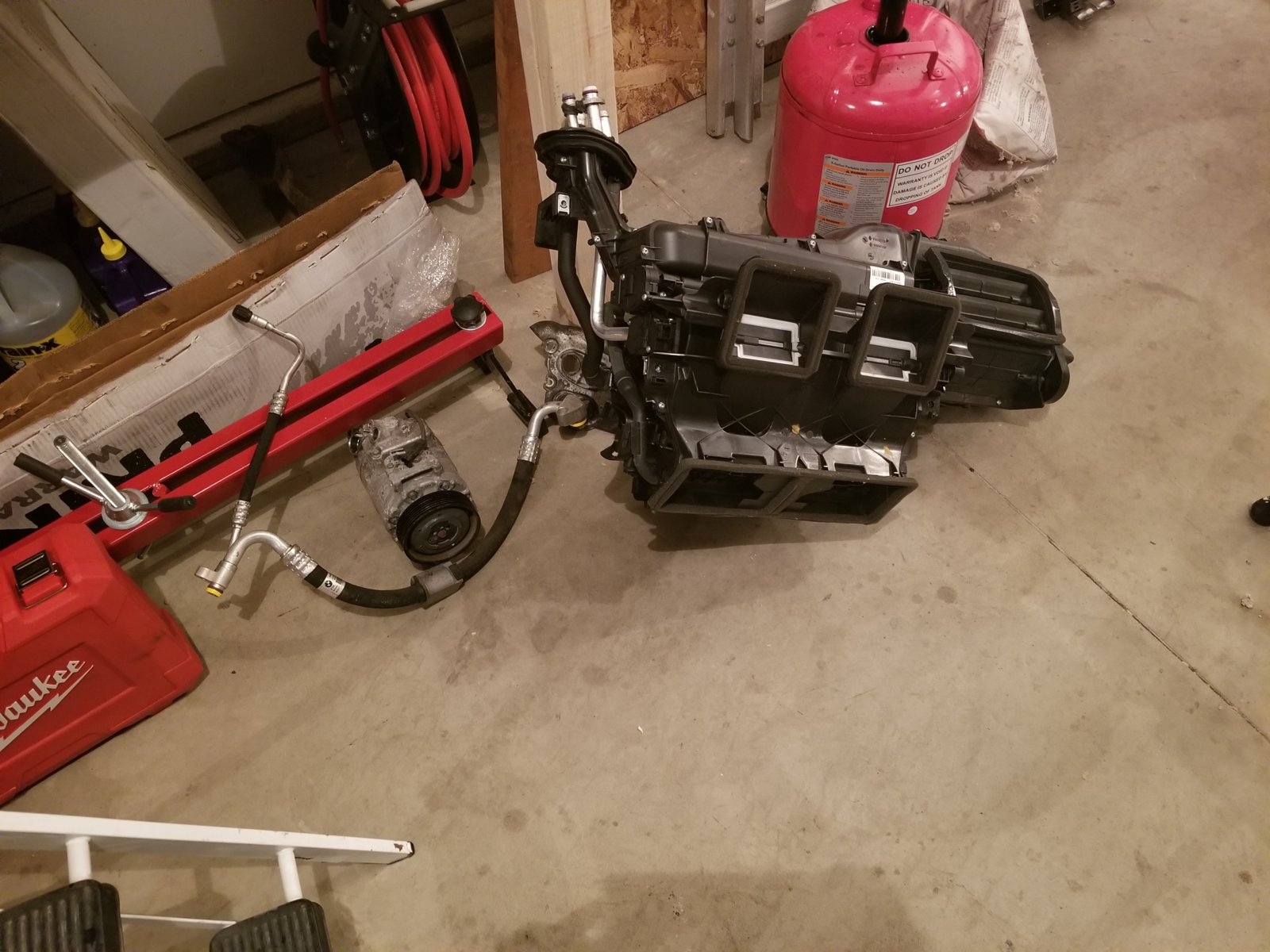 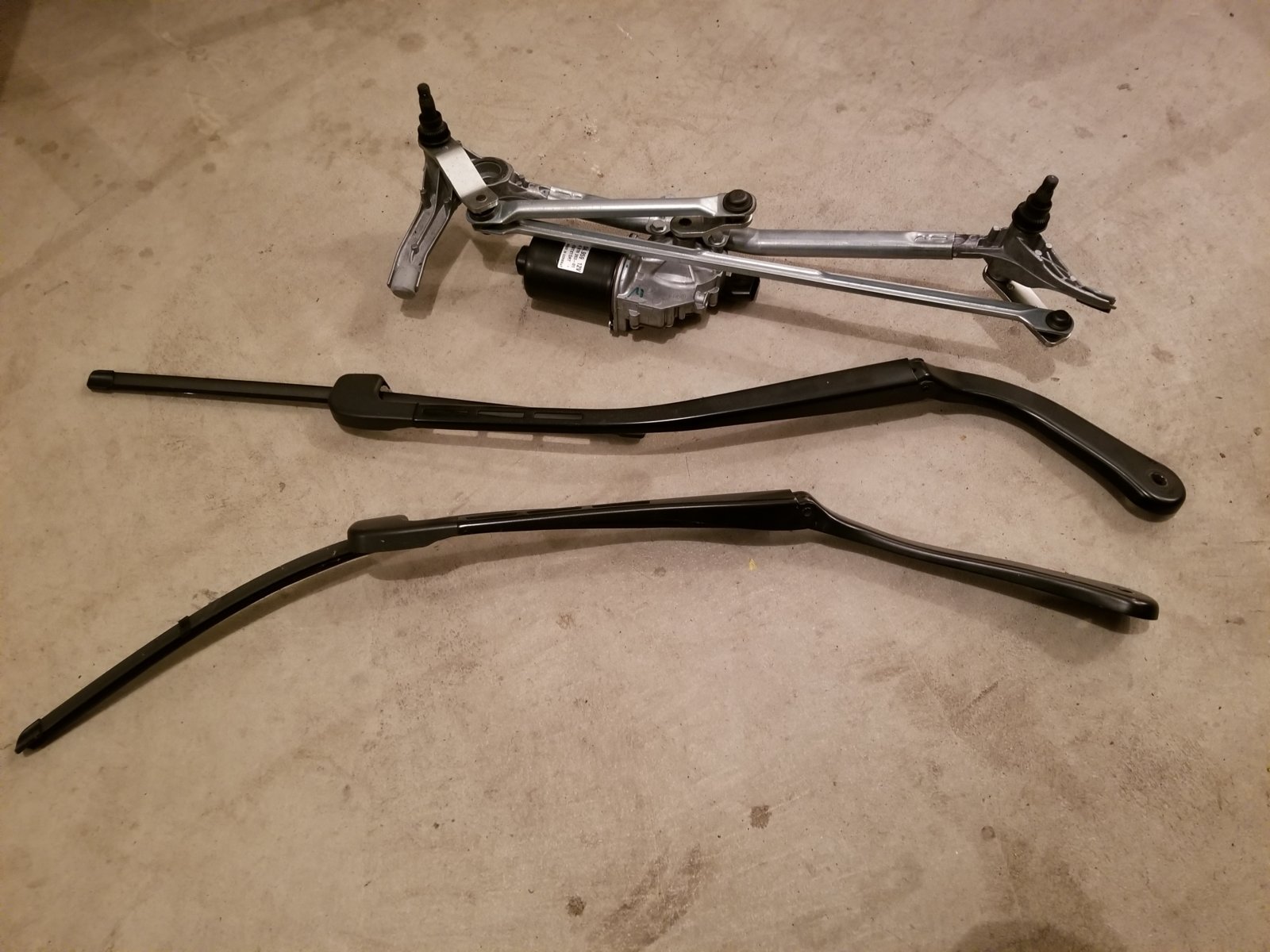 Hard Motorsport sunroof delete panel. Looks like a quality piece. We'll see how it fits and if I can get the dang thing to seal.... 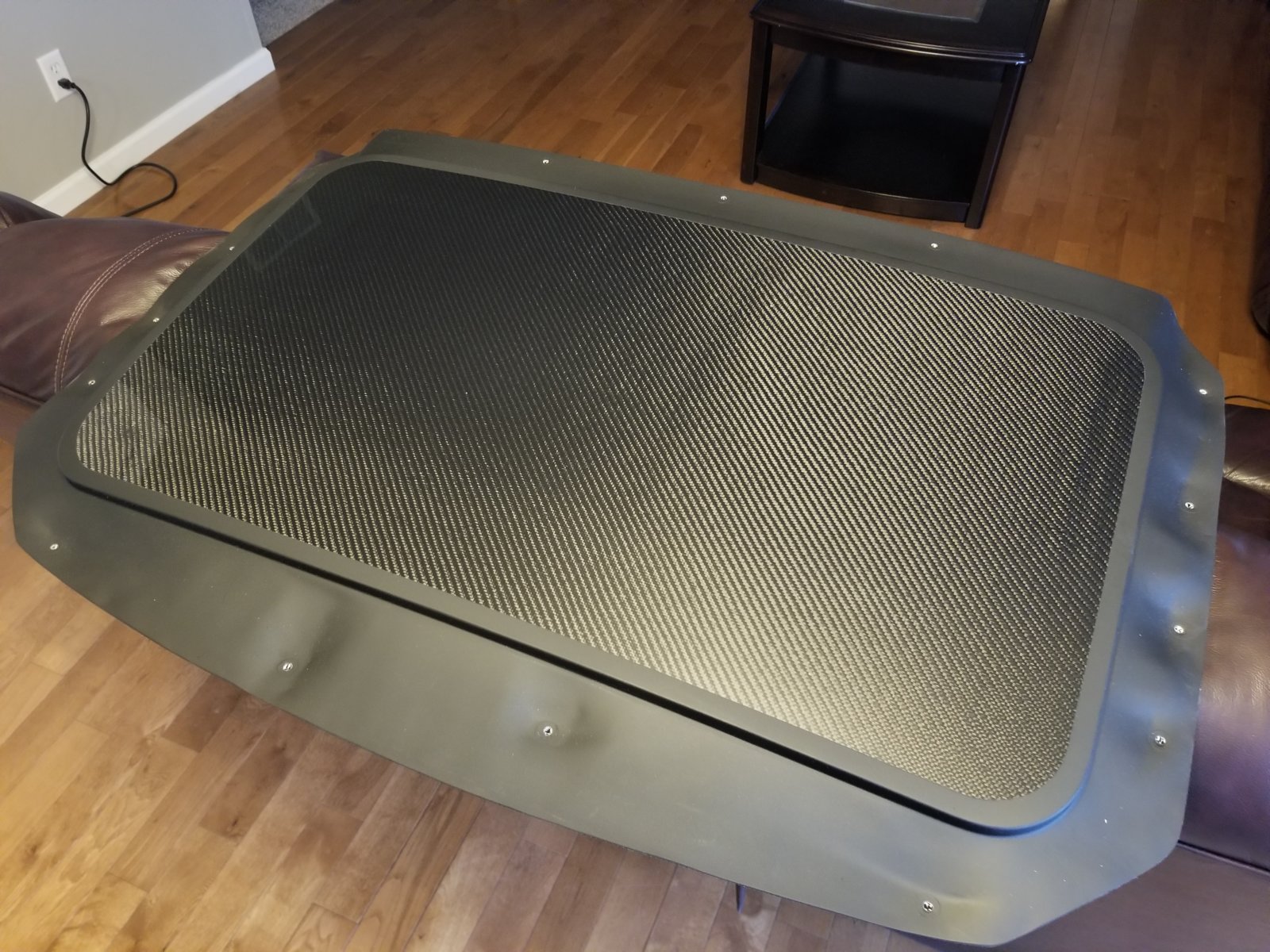 Wow, this is an incredible amount of tearing down! Looks to be a fun project, that DocRace kit looks sweeeeeeet!

I am interested in how that sunroof delete works out.
Reactions: Rcboosted2007

You’re going to have swap the m3 diff or go 8.8. The Ring and pinion on the 335i diff are weak along with the output shaft/flange You’ll snap it like a twig. 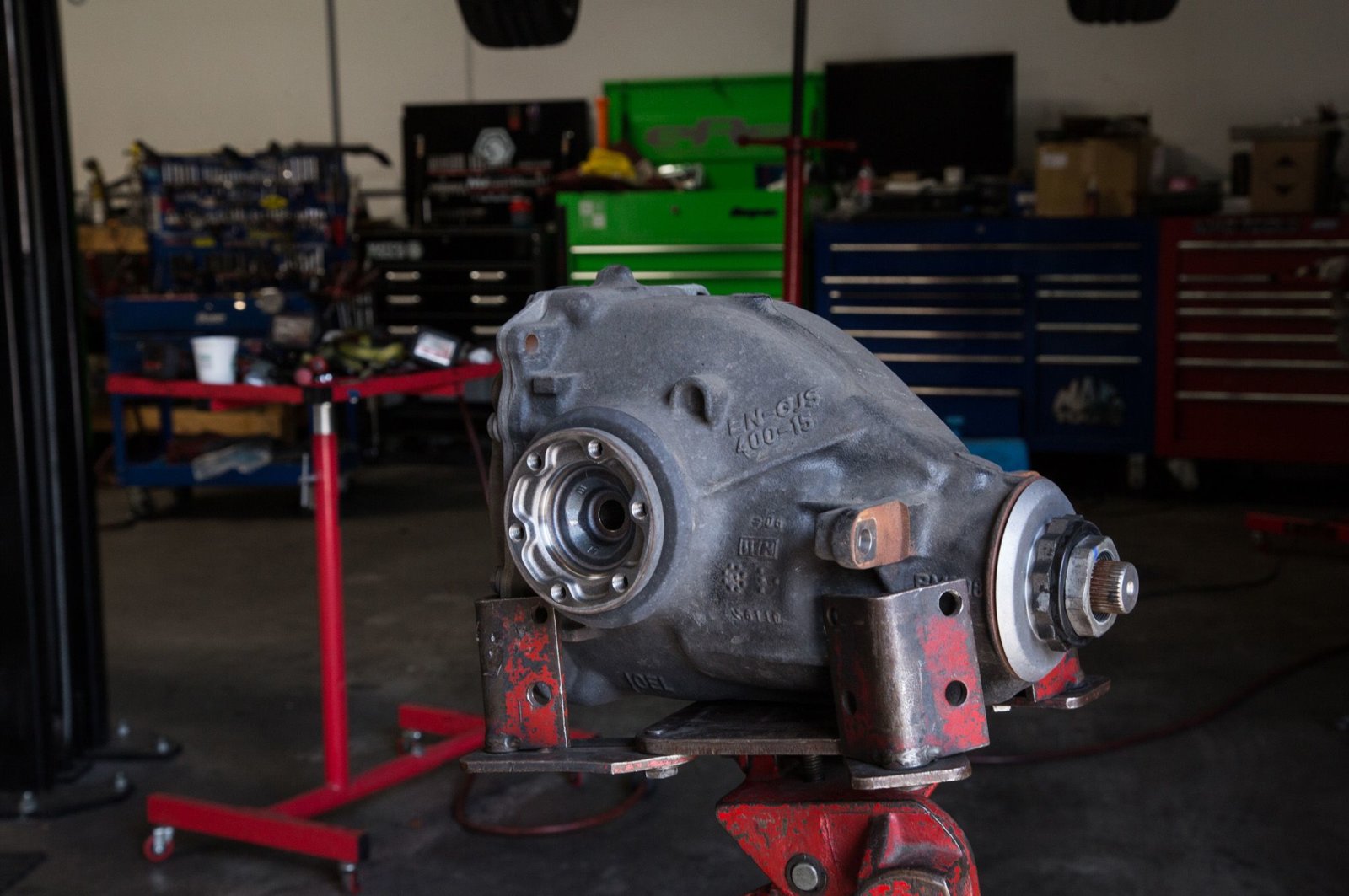 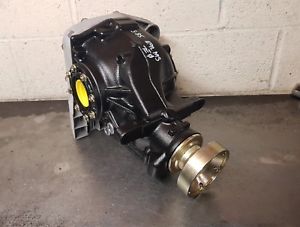 Awesome to see another local build! Hope it works out man!

Abacus38 said:
You’re going to have swap the m3 diff or go 8.8. The Ring and pinion on the 335i diff are weak along with the output shaft/flange You’ll snap it like a twig.
Click to expand...

I'm fully expecting it but going to see how far it'll take me. Who knows, if I can sell this one maybe I'll do the swap.
Reactions: Abacus38

I blew mine up at the track

SJ_1989 said:
I'm fully expecting it but going to see how far it'll take me. Who knows, if I can sell this one maybe I'll do the swap.
Click to expand...

Yeah I found out the hard way when i blew mine up at the strip on stock turbos but the good news is that you’re on bias ply so it should last longer. I was on drag radials

My intent is to use the hydrobrake to load up the driveline to help as well. I don't know, I'm still torn. Maybe I'll just do the 8.8 instead of the suspension so I know I can put the power to the ground, just not efficiently.
1

If I recall correctly, the dude in Australia that ran a 9 on a powerglide was using a stock welded rear diff. Those bias ply tires should help eliminate some shock on the drivetrain

This is really awesome. Maybe one day I'll follow and do the same.

135iTX said:
If I recall correctly, the dude in Australia that ran a 9 on a powerglide was using a stock welded rear diff. Those bias ply tires should help eliminate some shock on the drivetrain
Click to expand...

Then maybe it'd be alright for a bit. Or at least until MHD releases antilag lol.


[email protected] said:
This is really awesome. Maybe one day I'll follow and do the same.
Click to expand...

Thanks, it's been fun so far. Except removing the wiring harness. That suuuuucked.

Your plan to reduce weight will help save your drivetrain. I also agree with 135iTX’s comment regarding bias ply tires. I say the stock welded diff would be fine for a while.
Reactions: SJ_1989

my car on bias ply hit a 1.4 60ft many many times and never broke. Stock diff

And you're also pretty aggressive with weight reduction like me, good to know. 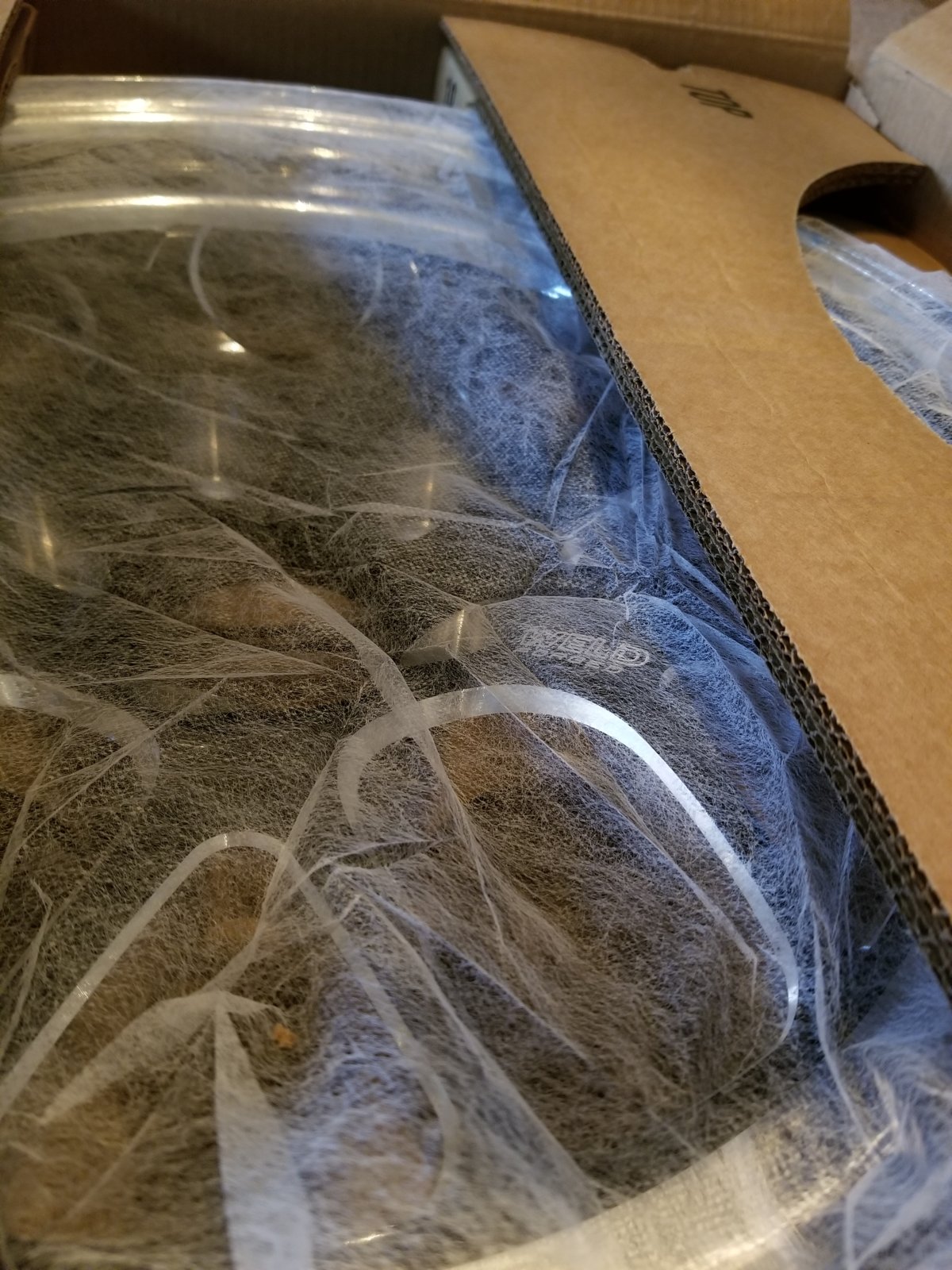 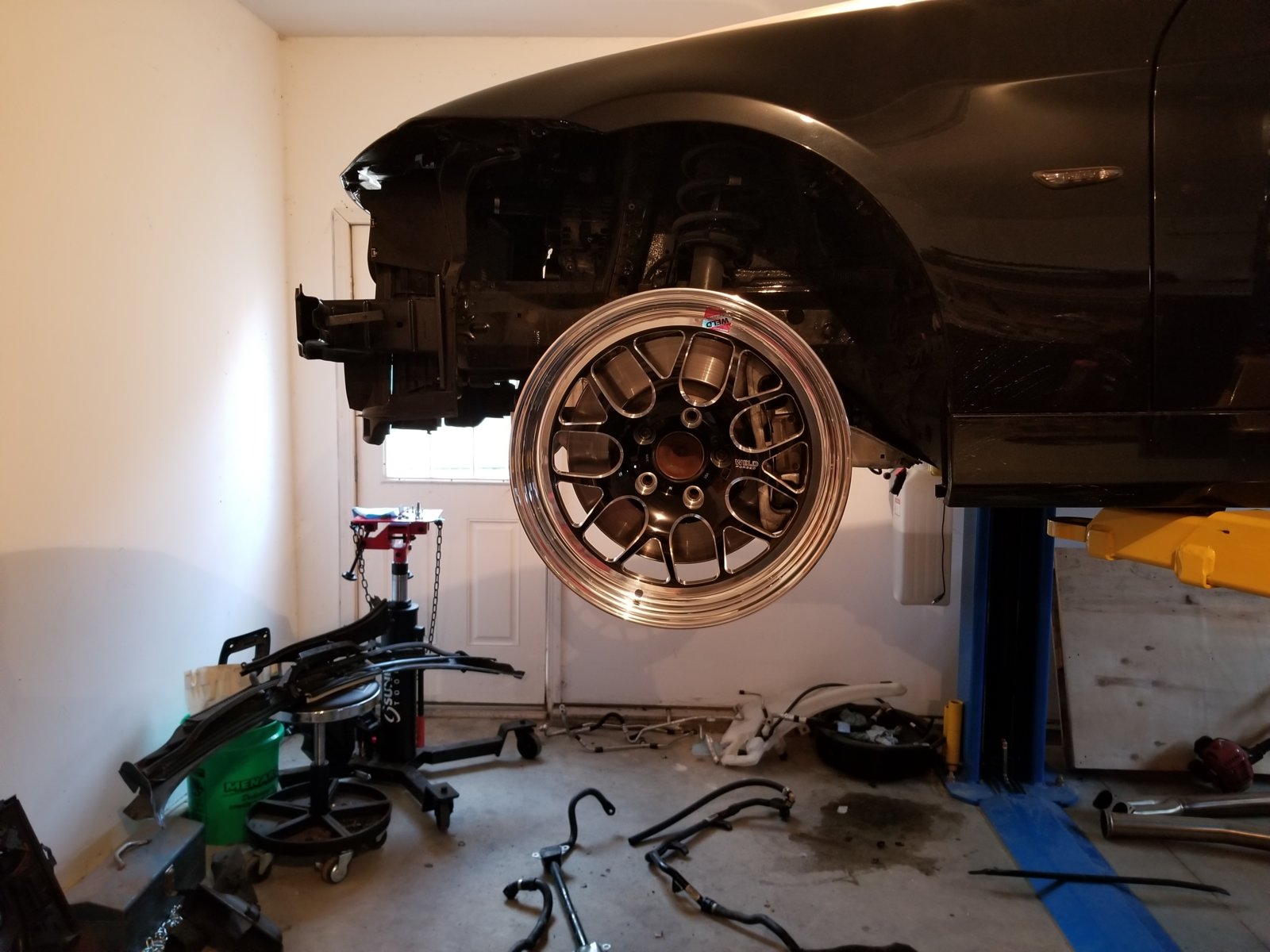 Have you looked into the front end tube chasis conversion?

Rcboosted2007 said:
Have you looked into the front end tube chasis conversion?
Click to expand...

Yea, I've had that conversation with the chassis shop but not something I'm doing quite yet. This years goal is to focus on safety and get a solid foundation to go low 10's, and dare I say it, high 9's *don't freak out people*. 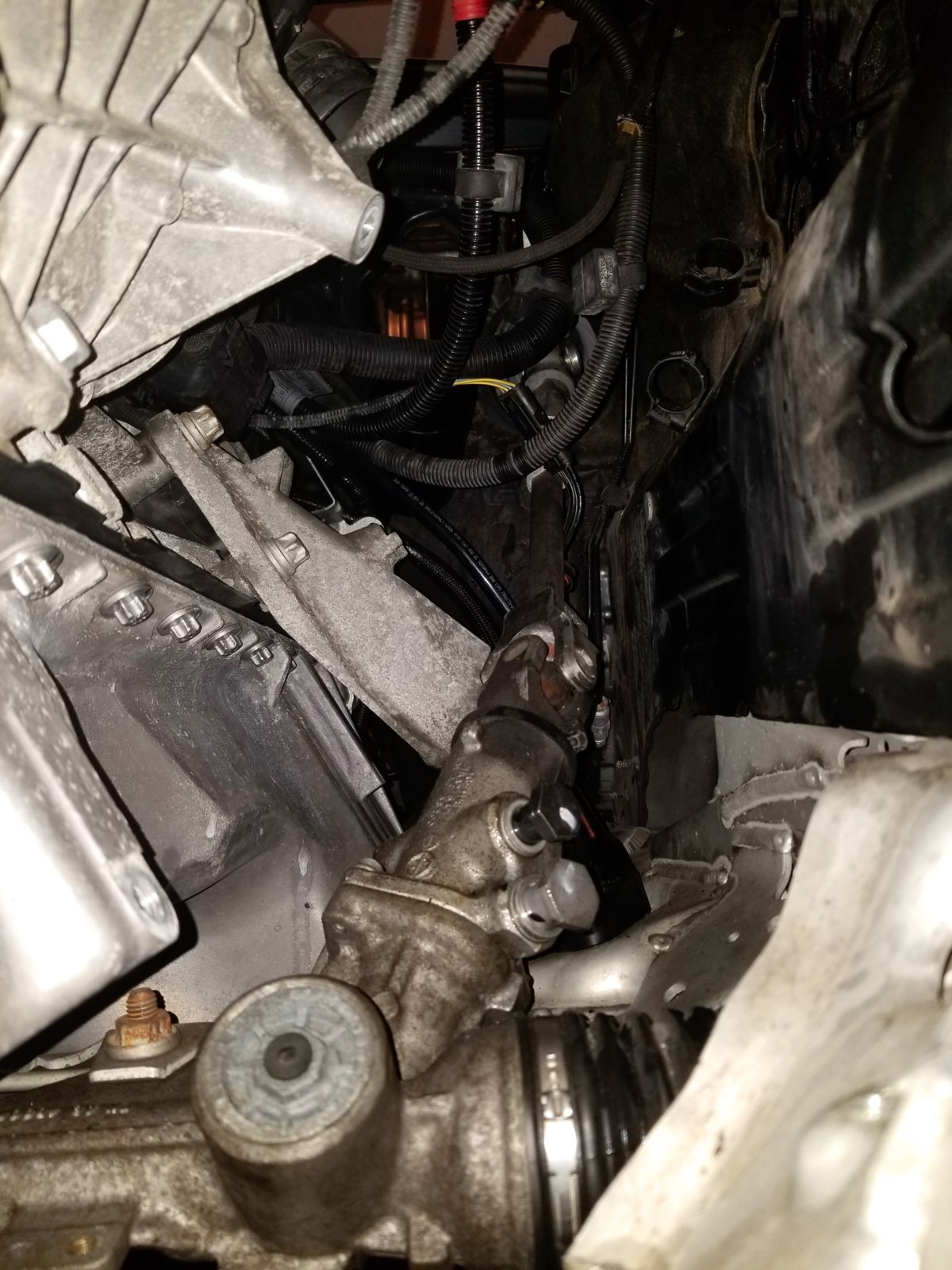 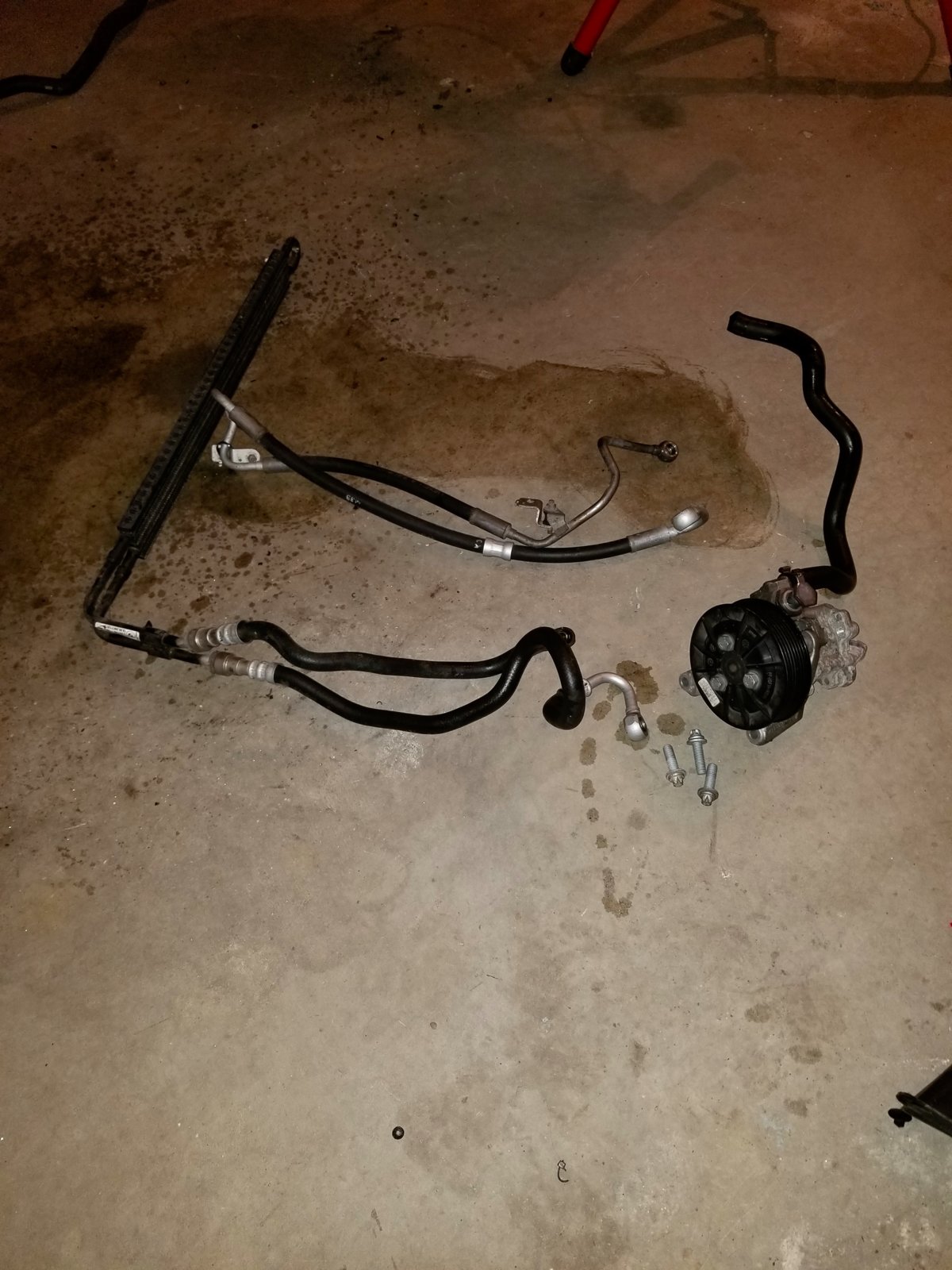 Installed the PSP 900 intercooler. The J-pipe supplied doesn't appear to work with the VRSF chargepipe or doc race single turbo kit. So I'll have to get something custom made I guess. 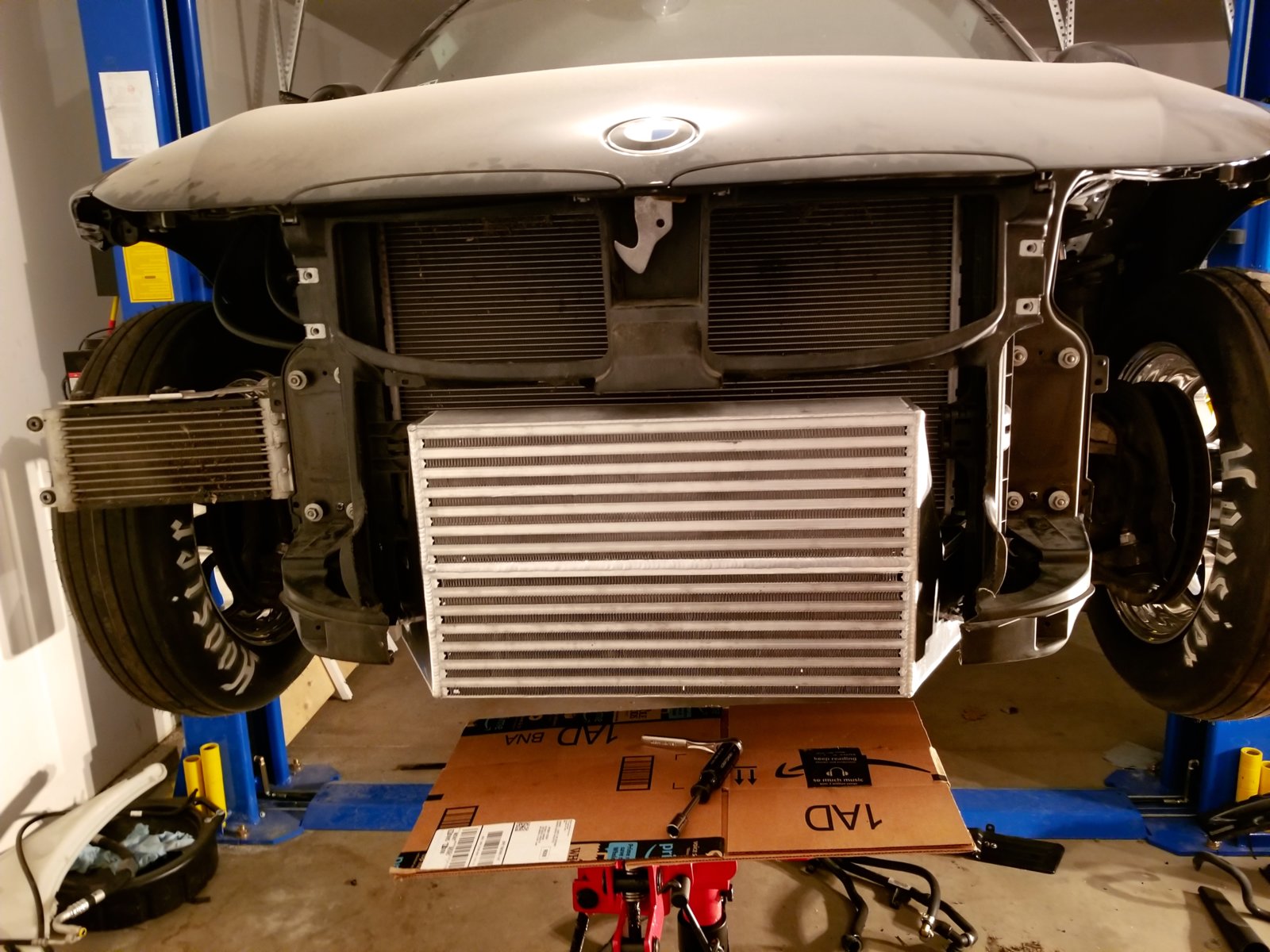 Found a killer deal on a 28' enclosed trailer local to me. Dealer has been sitting on it for awhile as trailers like these don't sell quickly in my area. 5200# dexter axles, cabinets, electric jack, 7.5' ceiling, wired for A/C, finished interior, 50 amp panel, etc. 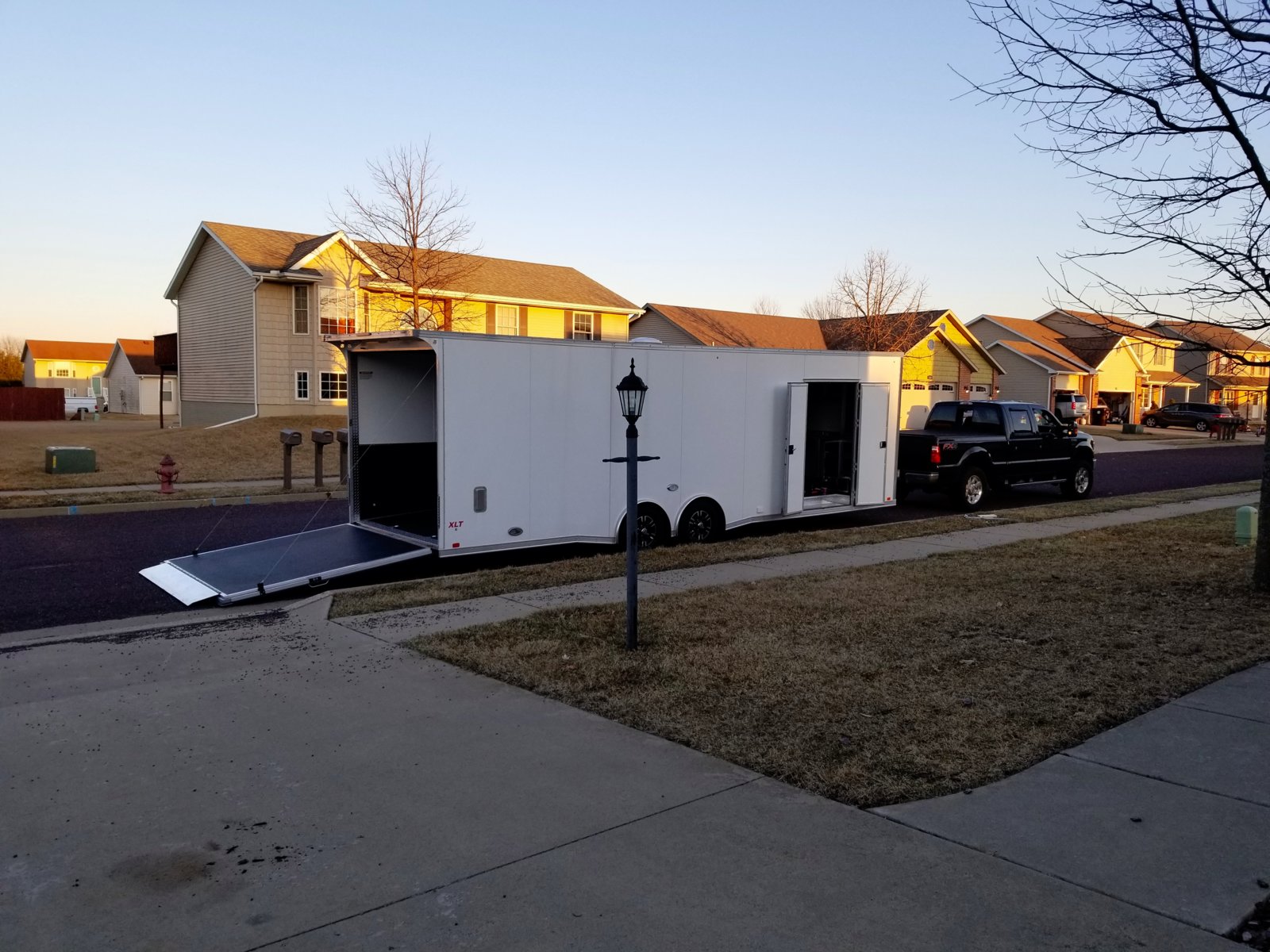 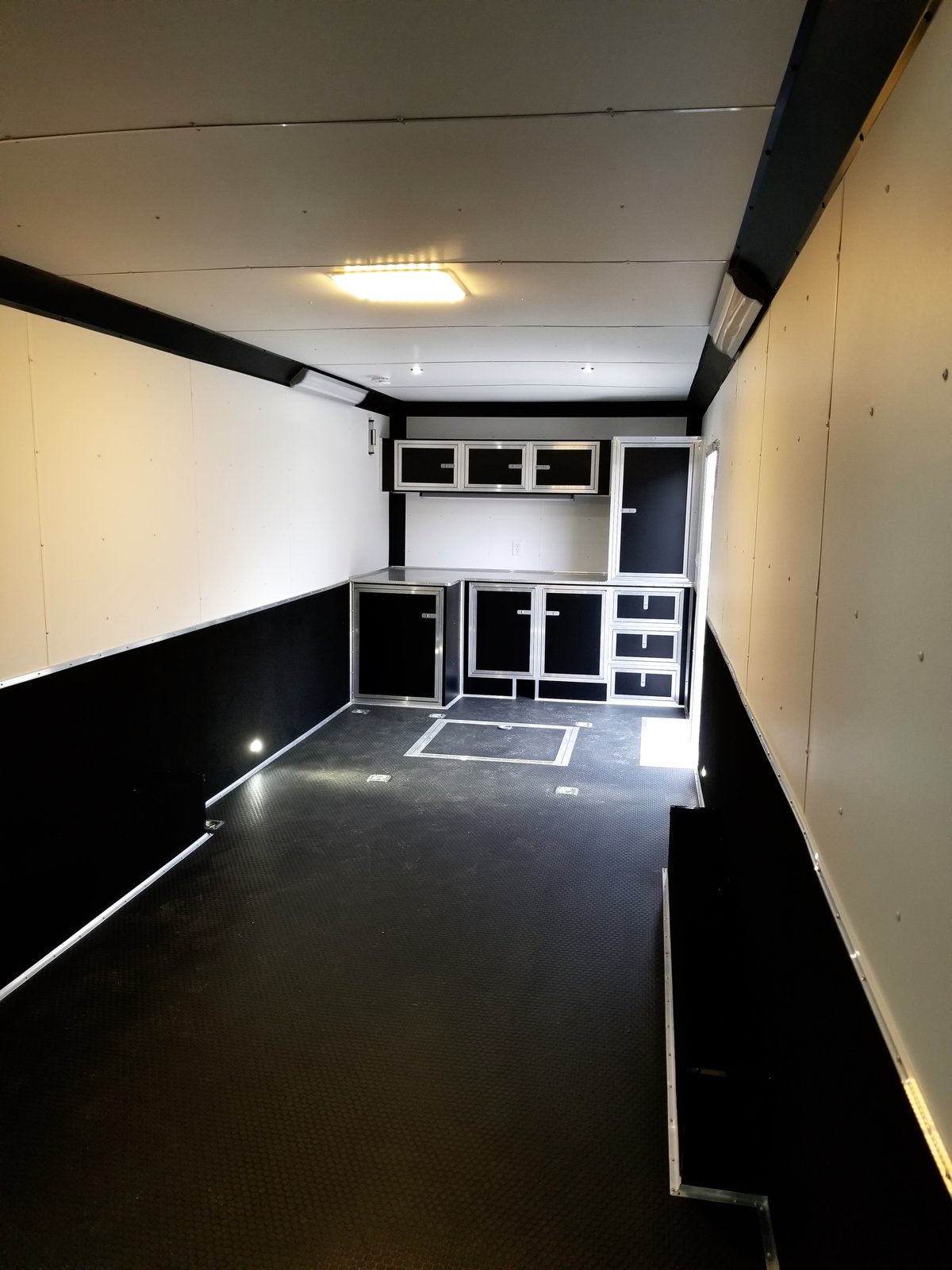 Last edited: May 6, 2019
Reactions: Torgus, R.G., fmorelli and 1 other person
You must log in or register to reply here.