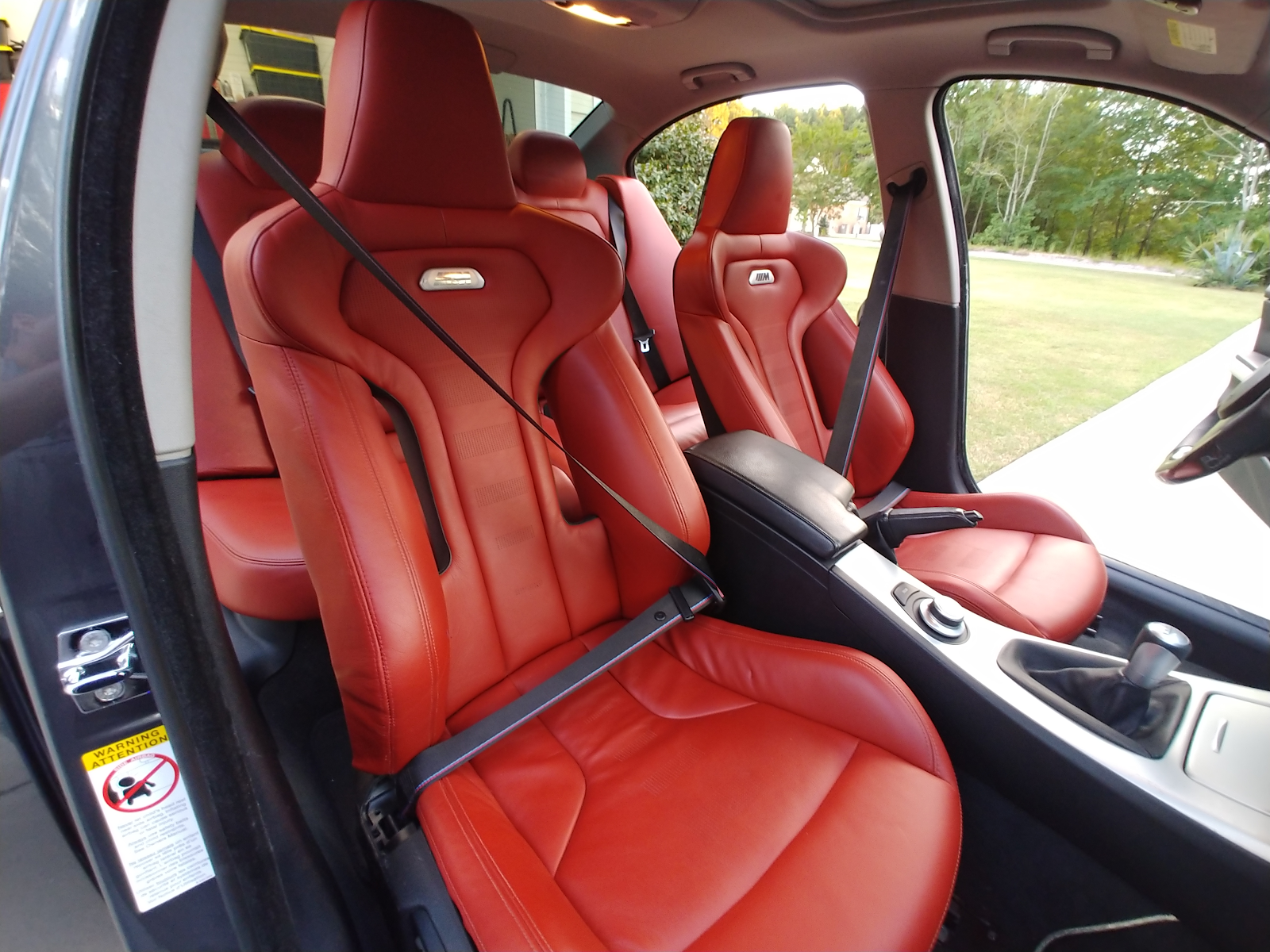 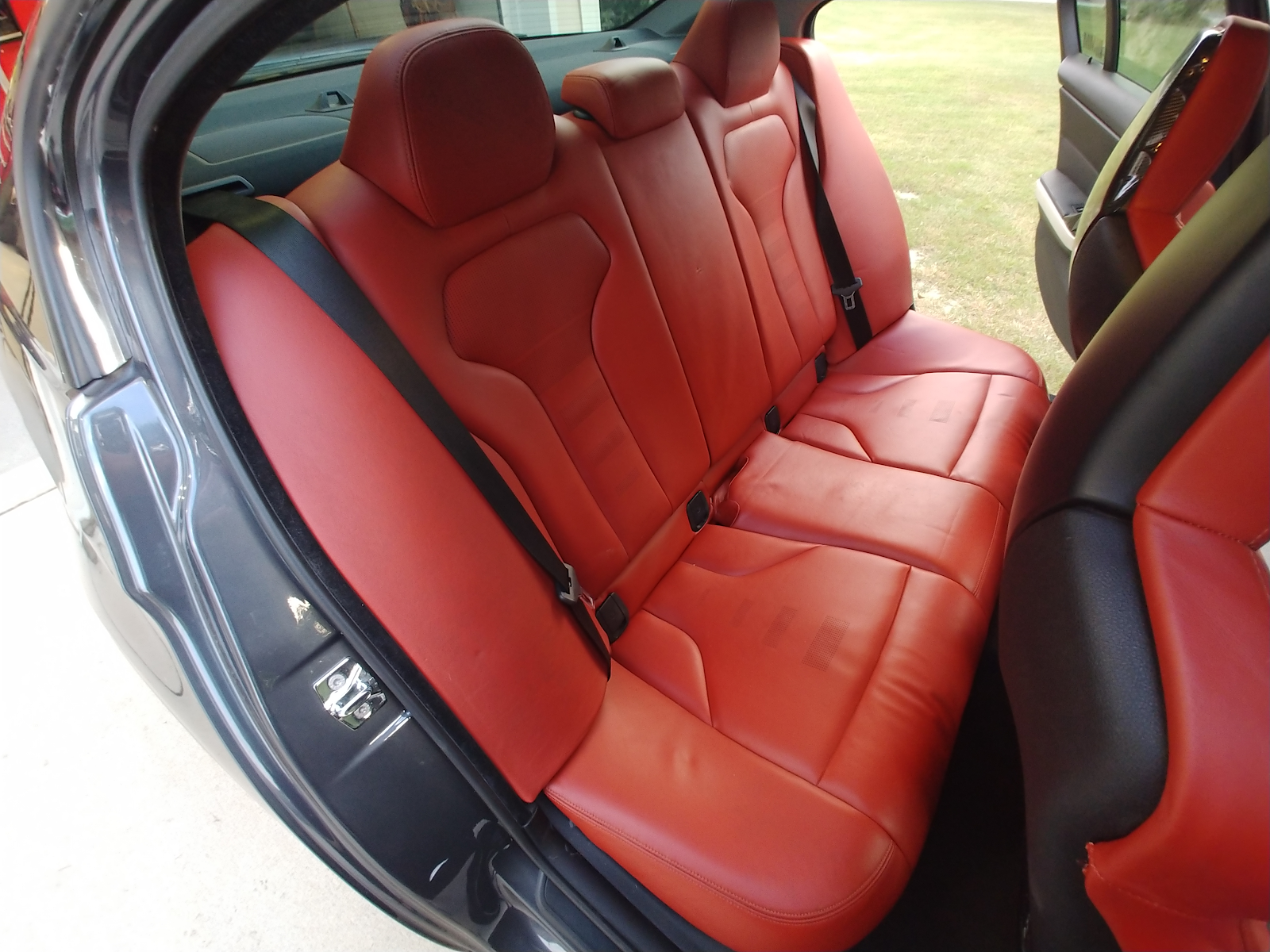 EDIT: Since linking to other forums is OK, I wanted to give due credit to the 2 guys that gave me the encouragement to do this.

MPROVED (Jayden) from West Auckland had a great thread that was extremely helpful as well: http://bimmersport.co.nz/topic/60853-f80-m3-seats-into-e92-m3/

I also got helpful info from Stone Automotive's Youtube video on it:
I posted mine to try to be a bit more encompassing of all of them, with the specifics on the rewiring, and also to show that it works in a Non-M vehicle as well.

Since my car is pretty done as far as power mods go (no plans for single turbo, or supplemental fueling) , I figured I’d give the interior some love. I had considered Braum seats, but their just Chinese seats like any other non/off-branded stuff, they just have good marketing. Recaros are out of the question due to price, especially trying to keep power seats, side airbags, etc.

So I started hunting for some F80 M3 seats. I had seen a Youtube video where a guy put them in his E92 M3, and Adam from RebootEng put a set in his E90 M3. I just wanted a pair of black front seats, nothing spectacular.

I found out that they offer a cloth insert called “Carbon structure.” It’s typically only ordered by those that plan to track the car as the cloth is "grippier" and holds you in the seat better. 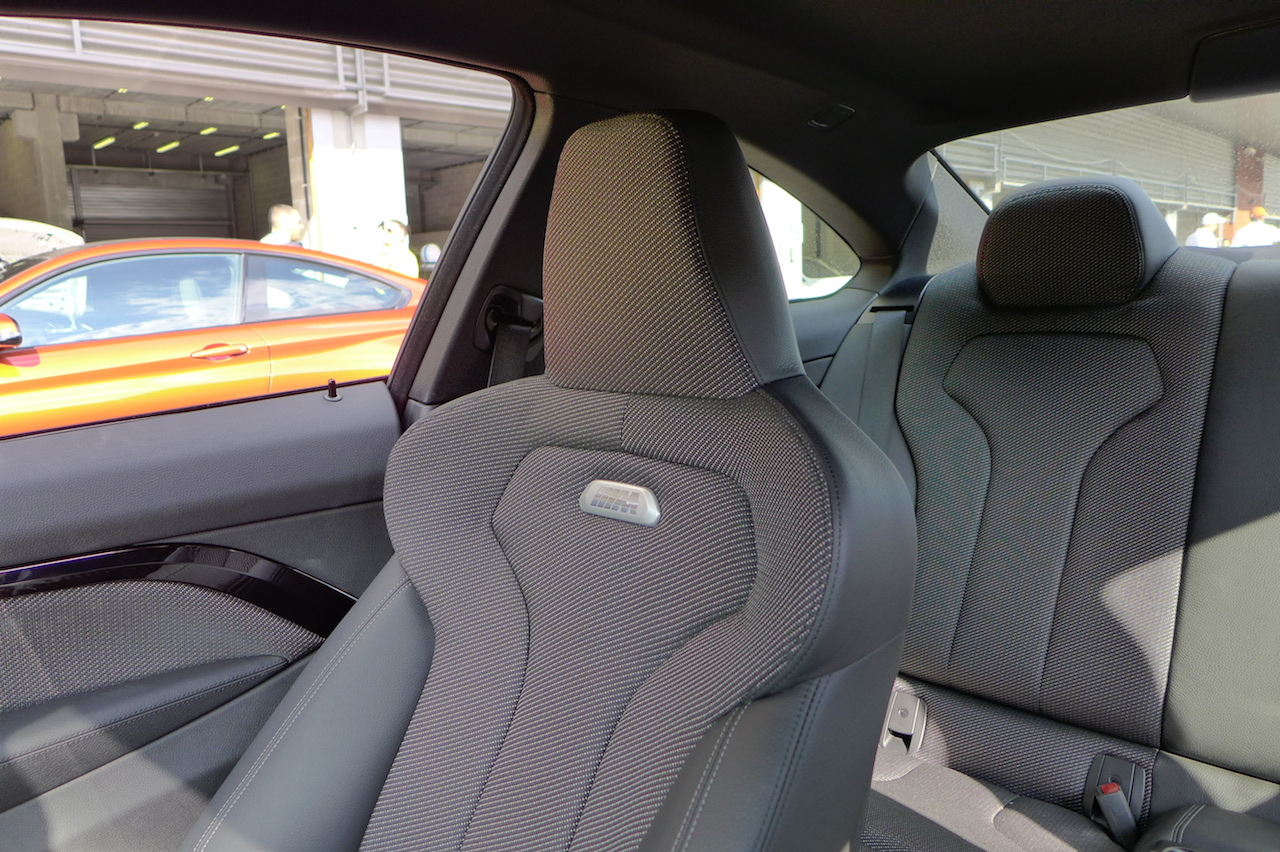 I found one at a junk yard for only $450! Unfortunately I only found ONE, and only the passenger side . I abandoned that idea due to the rarity of the cloth and unlikeliness of people to sell single seats, or just a drivers side and rear.

I kept an eye on F80 M3 seats for a while (on CL, FB, and Car-part) and saw a junkyard that had what looked to be a competition model (ZCP) driver’s seat for a crazy good price. Unfortunately it was Sakhir Orange, and they didn’t have the passenger seat listed.

I took a chance and called them up - they had the passenger seat, but it had a blown airbag and bent frame. After some initial issues and a misunderstanding, Sam from Benzeen Auto (definitely check them out if you need any BMW parts) took fantastic care of me and got me both front seats, the seat belts, and the rear seats, except for the bottom cushion which was missing. I figured I could just use a regular F30 rear seat that was red, or dye a different color one - they are cheap. 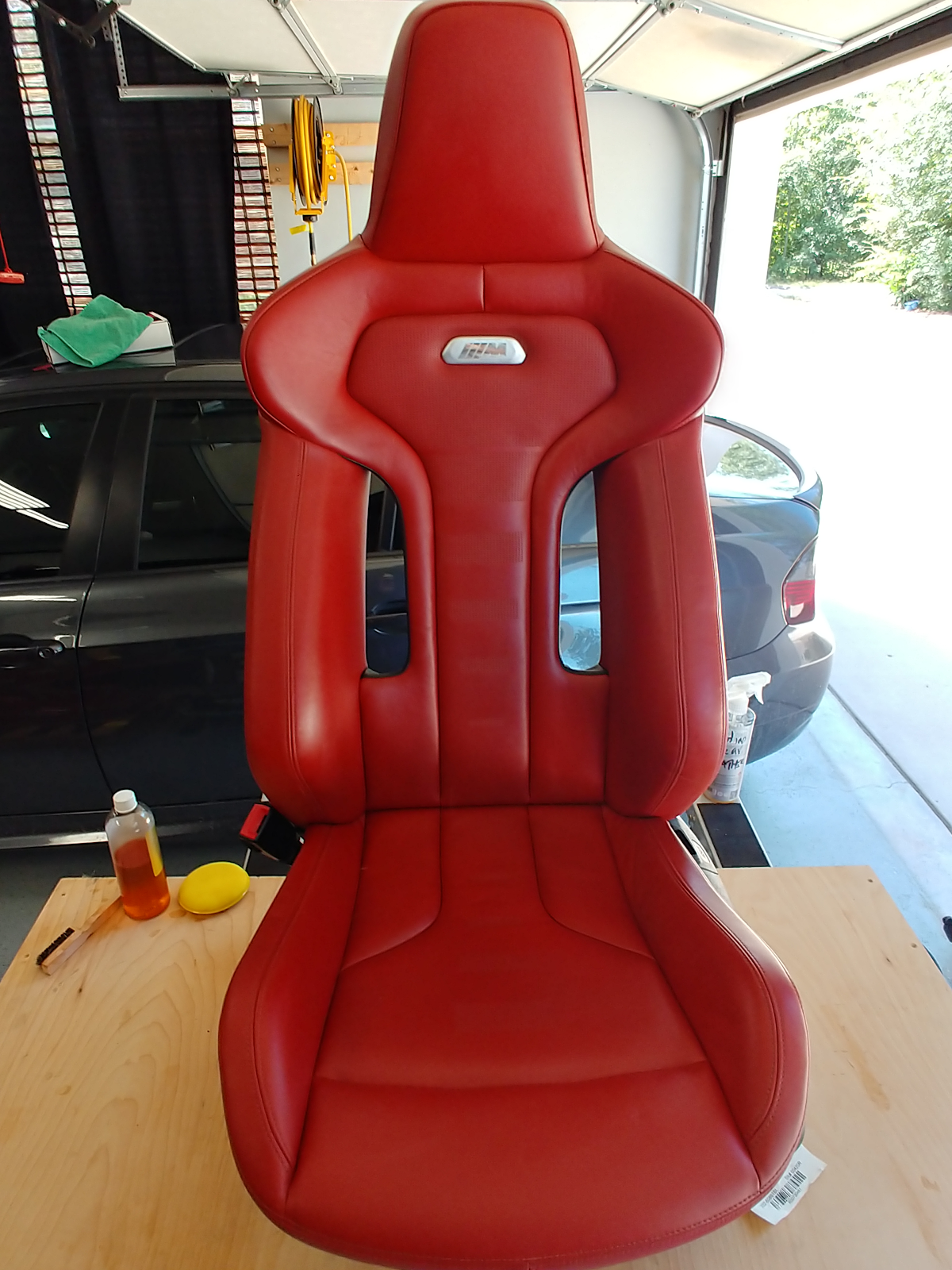 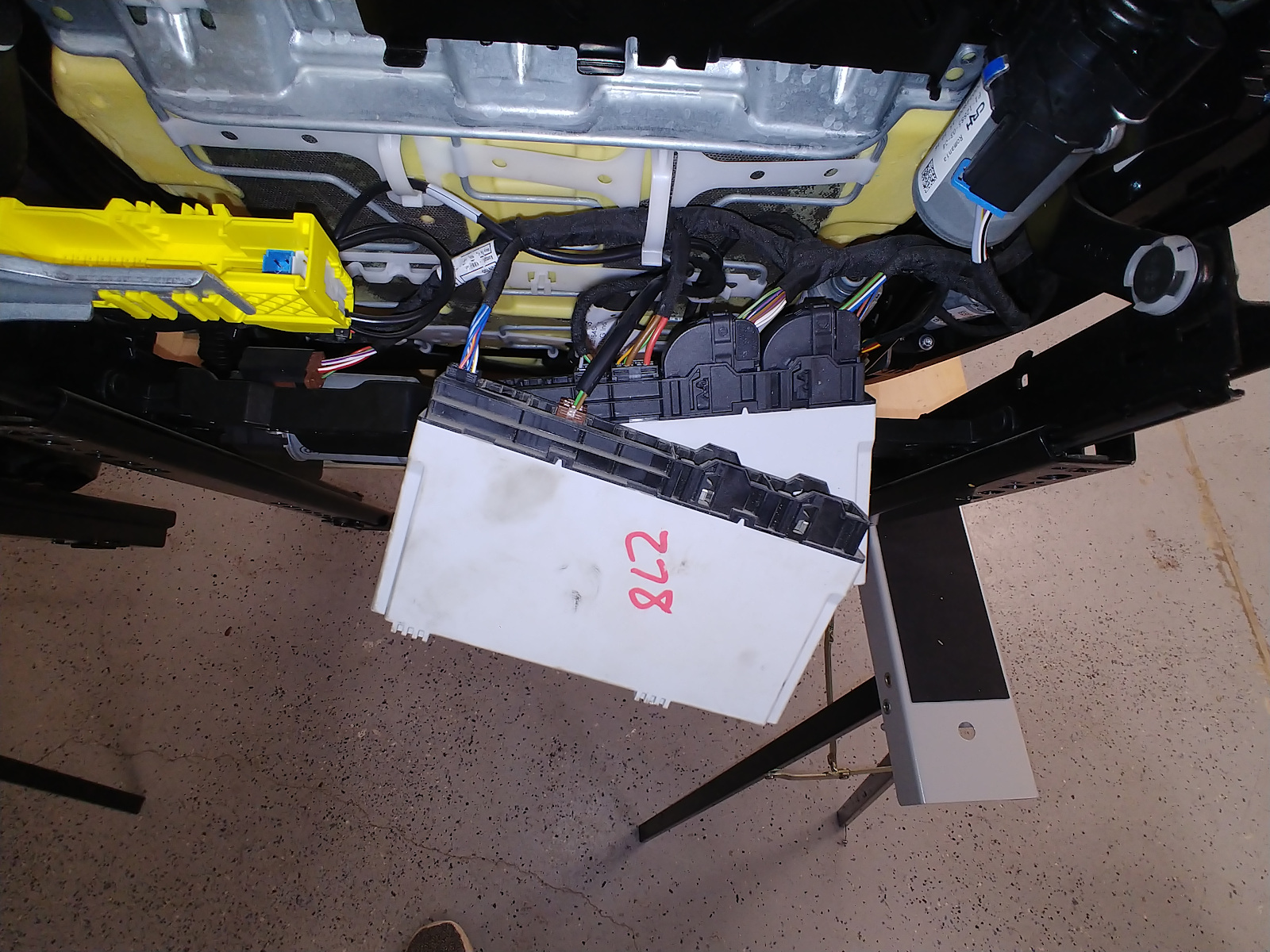 I also ordered a passenger airbag from an F30 (F80 and F30 are the same) The passenger seat frame was bent, so I ordered a base frame from an F30 (again, same as the F80.) I discovered that the F80 base has an aluminum seat, while the F30 is steel, so I swapped them. (Yay for weight savings) 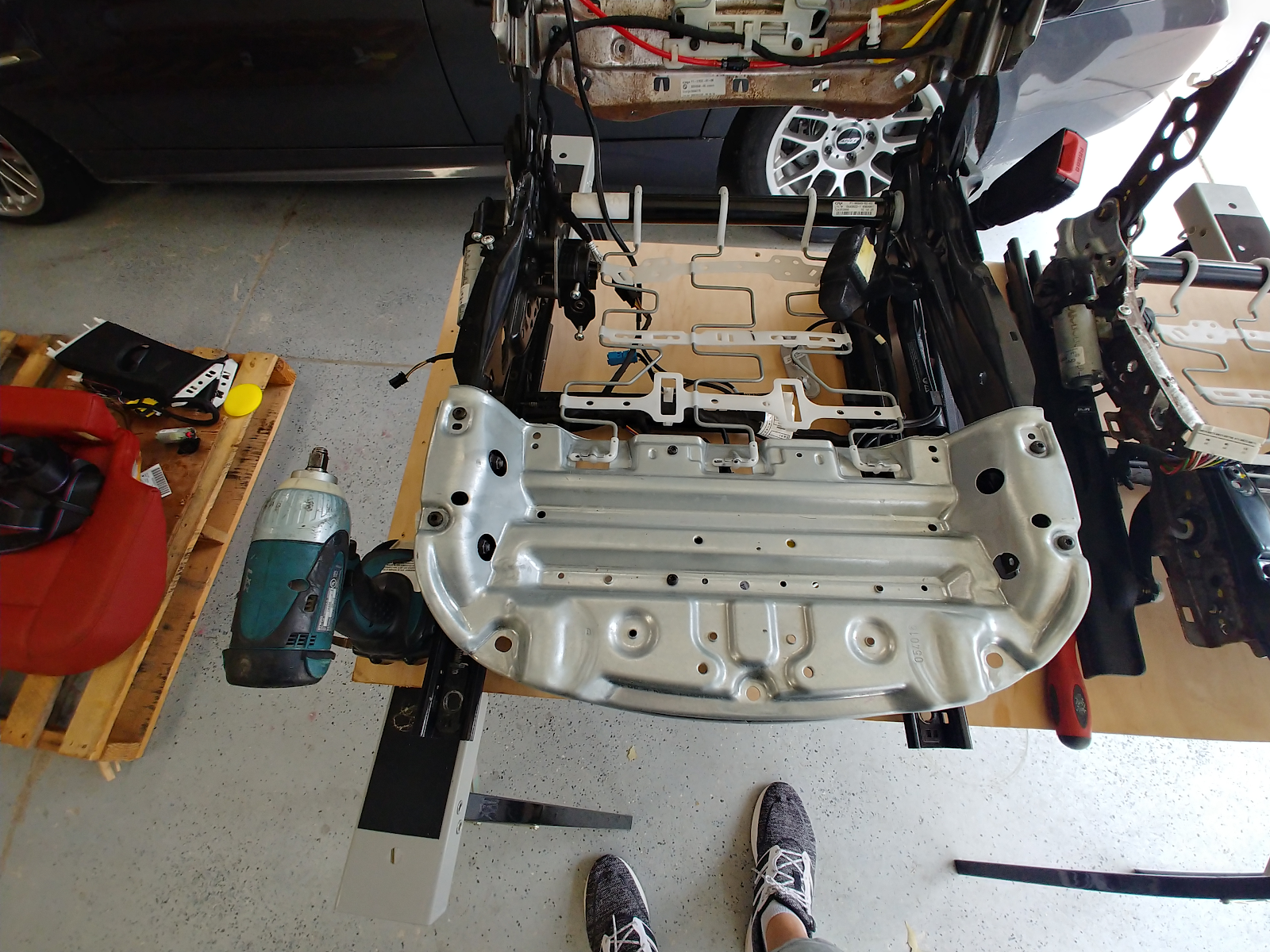 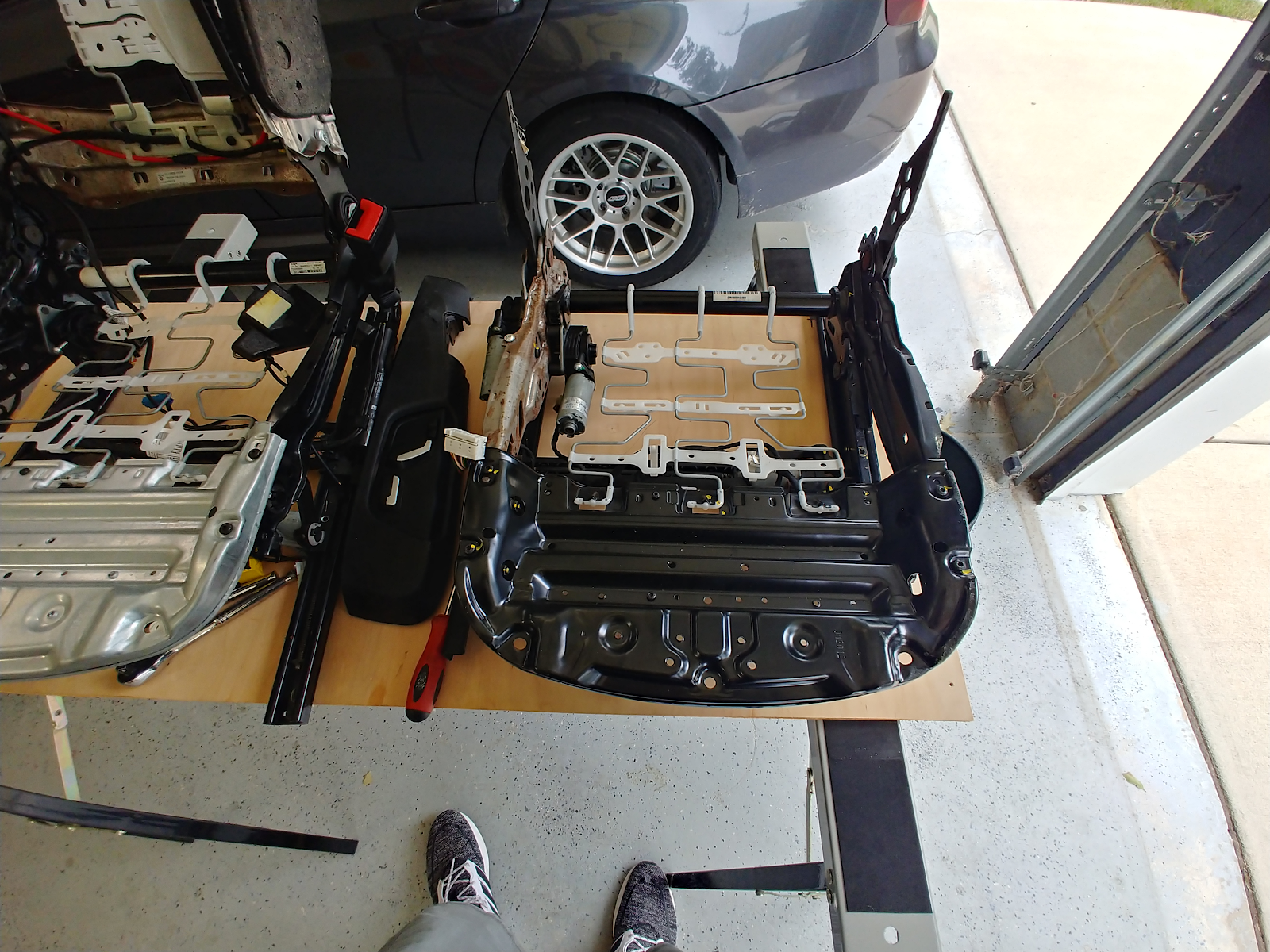 The absolute WORST part of the swap is the seat belts. The belt has a different mount to the seat and thus you have to use the F80 seat belts, but you need to move it to the E90 retractor.

Once removed from the car, you need to pull the belt all the way out of the retractor, and then pull the end forward to get a metal pin out, so it can be removed. This is fun because you need to keep the retractor from recoiling, especially when installing the F80 belt. If it freespins, it will ruin the retractor and you’ll need a new one. 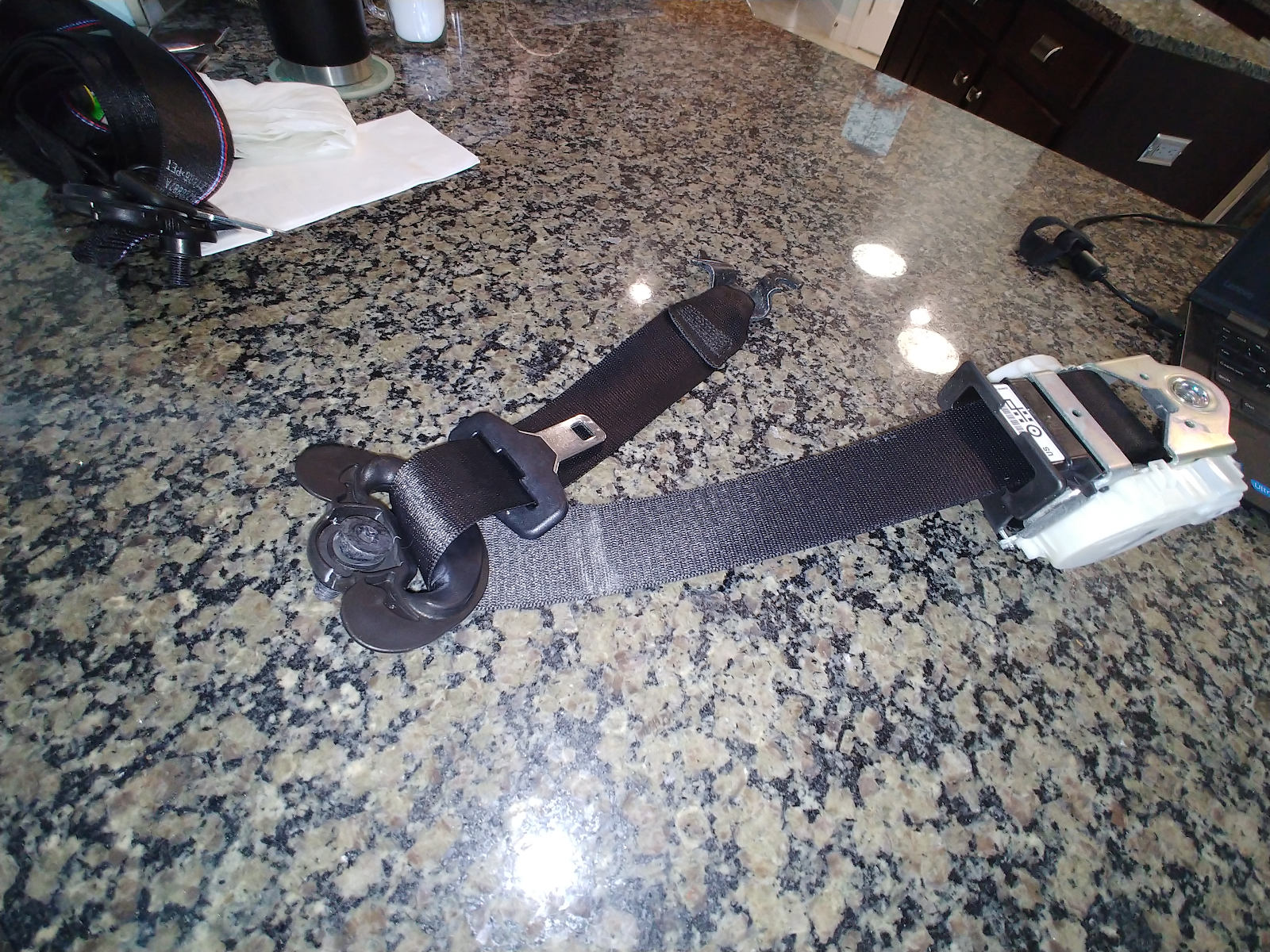 Making sure the belt is aligned right. You don’t want to have to re-do this if you put in upside down! (Note: I only used these belts because Benzeen threw them in - I was trying to avoid M specific stuff since people have such a conniption about it, but then I figured I have an M3 rep bumper, so who cares.) 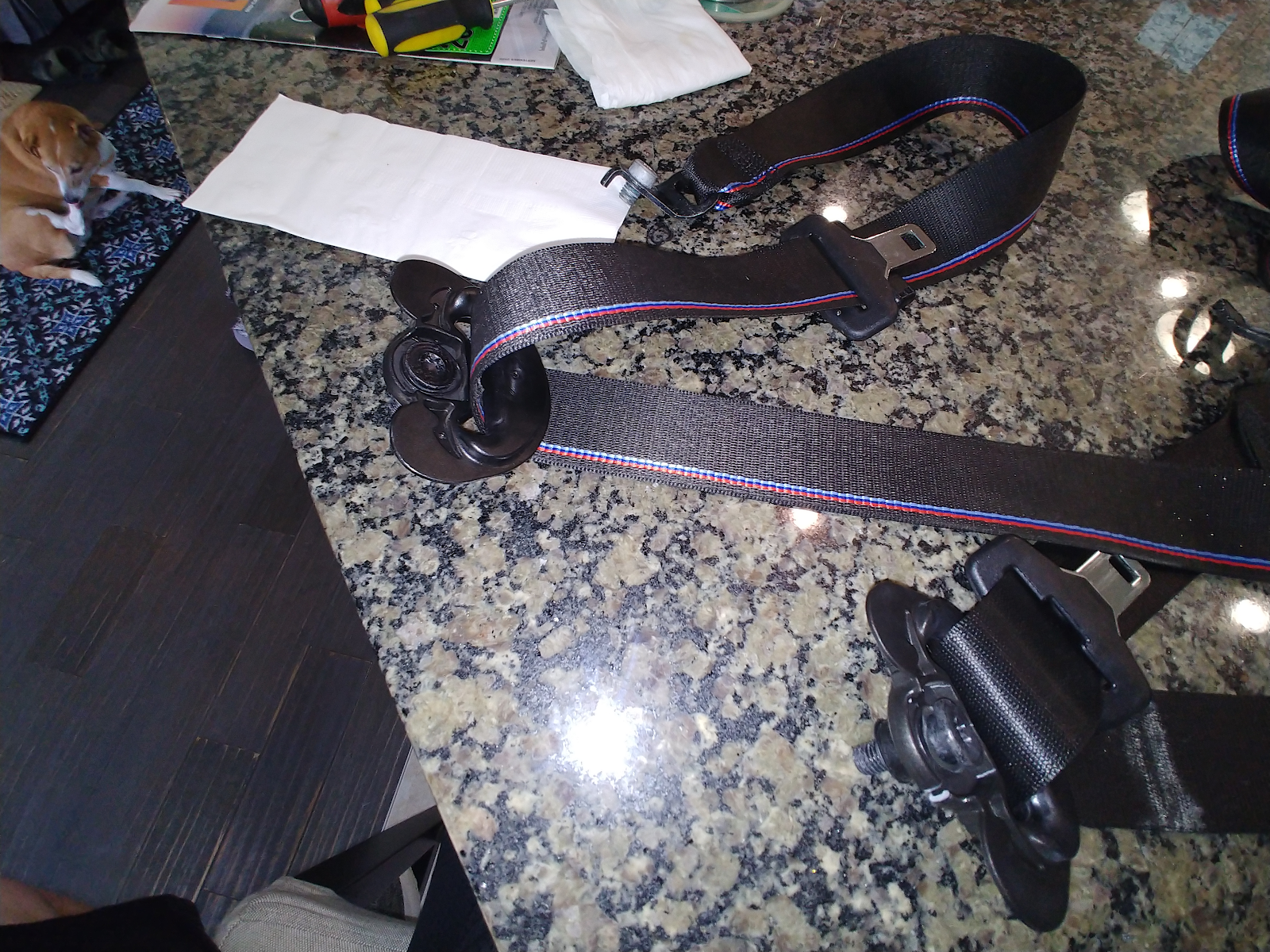 The belt needs to come forward, so the pin can be removed and then it can be pulled back through the retractor. 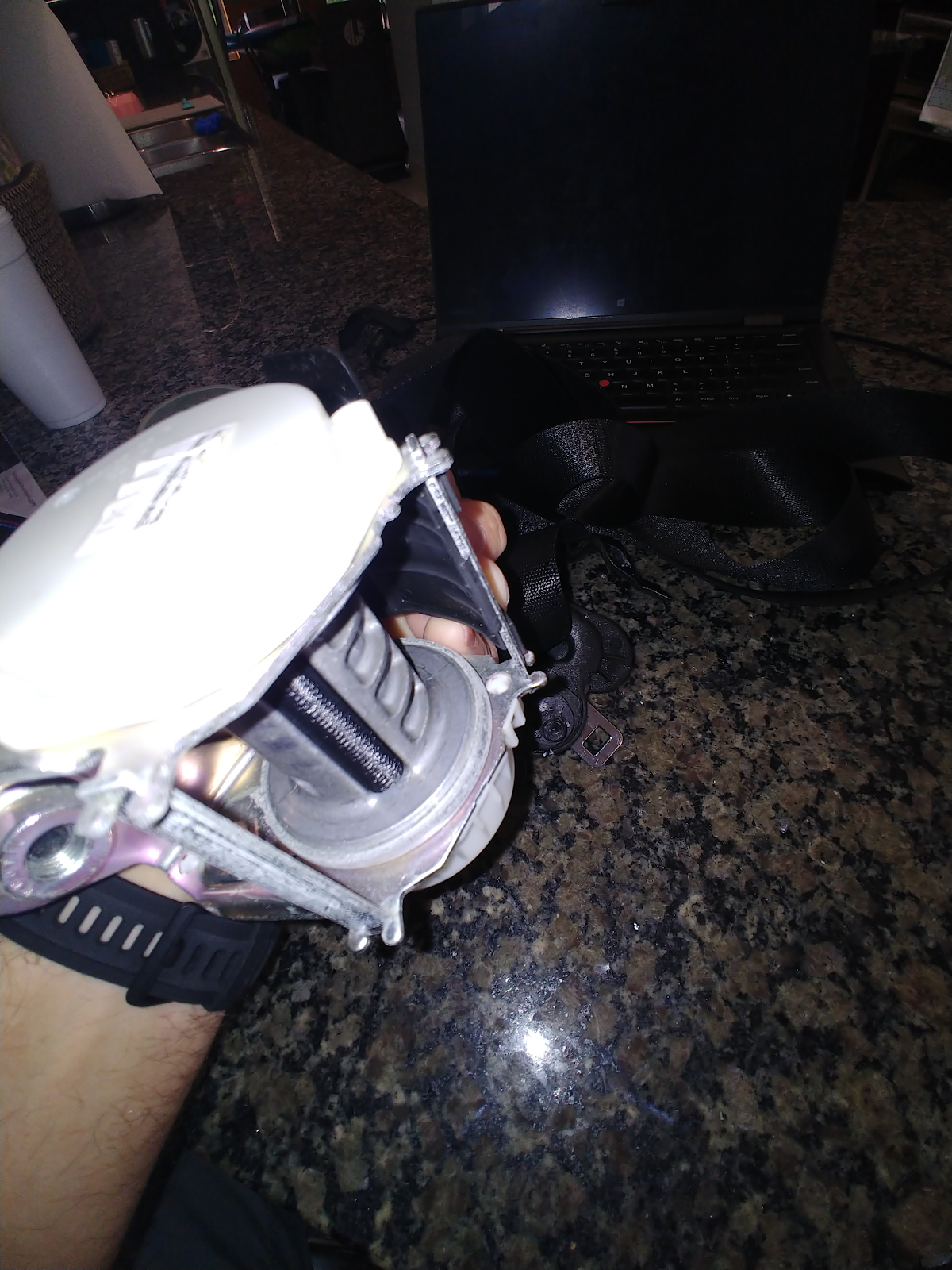 I had read that I needed to use the E9x passenger seat module, but my seat didn’t even have a control module. Not sure if it’s because I didn’t have fancy heated seats or something, but there was no module. I left the module that was on the F80 seat with no issue. 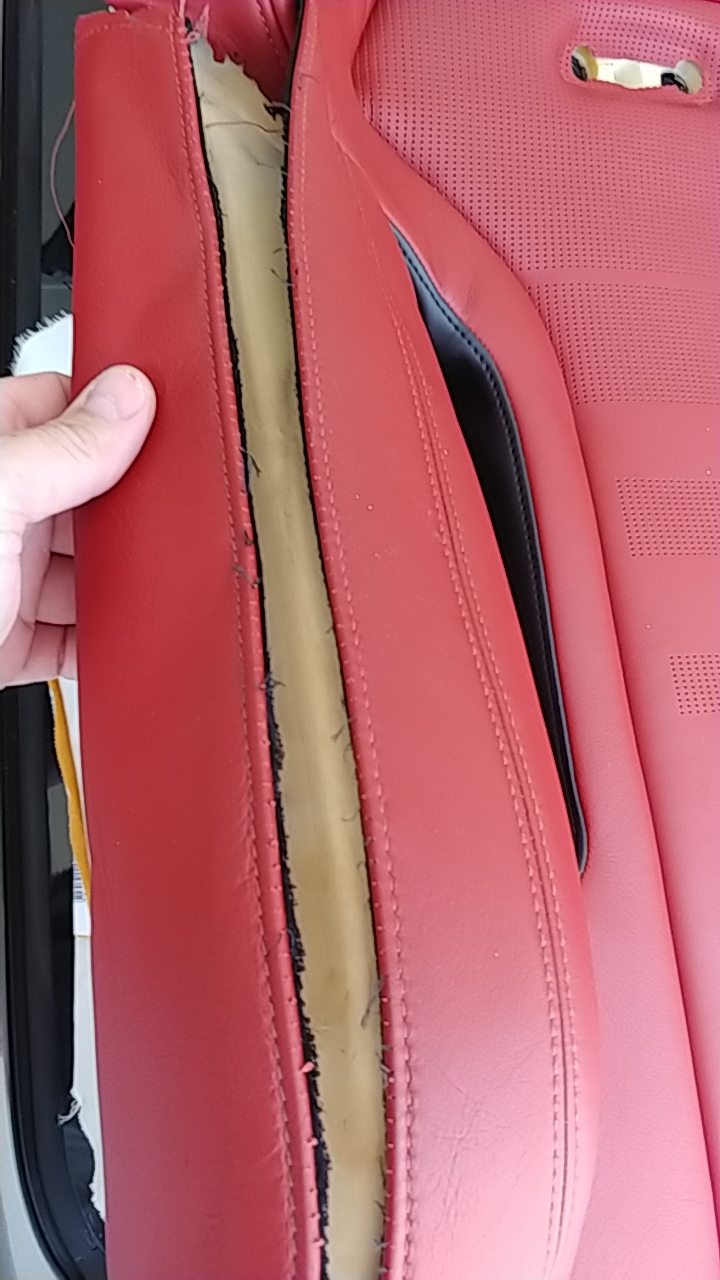 I had a local upholstery shop stitch up the leather. He did a great job and was dirt cheap. He does a lot of donks and custom interiors in general. https://stitchbyslick.com/gallery 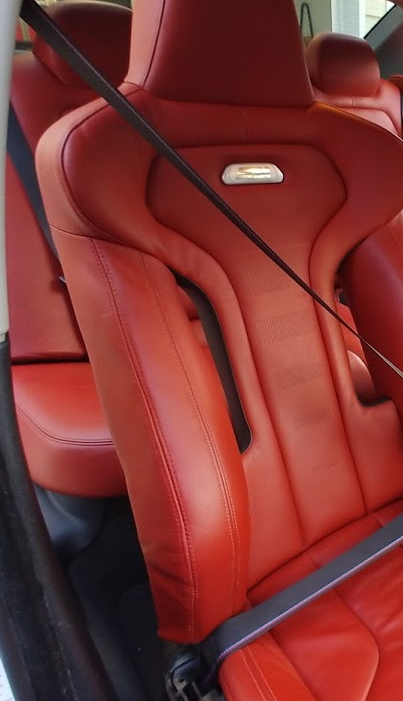 To connect the seats, you must swap the yellow housing and connectors from the E90 seat to the F80 seat.

The seat belt pre-tensioner is the easiest one. No repinning! - just swap the seat belt buckle from the E90 seat to the F80 seat 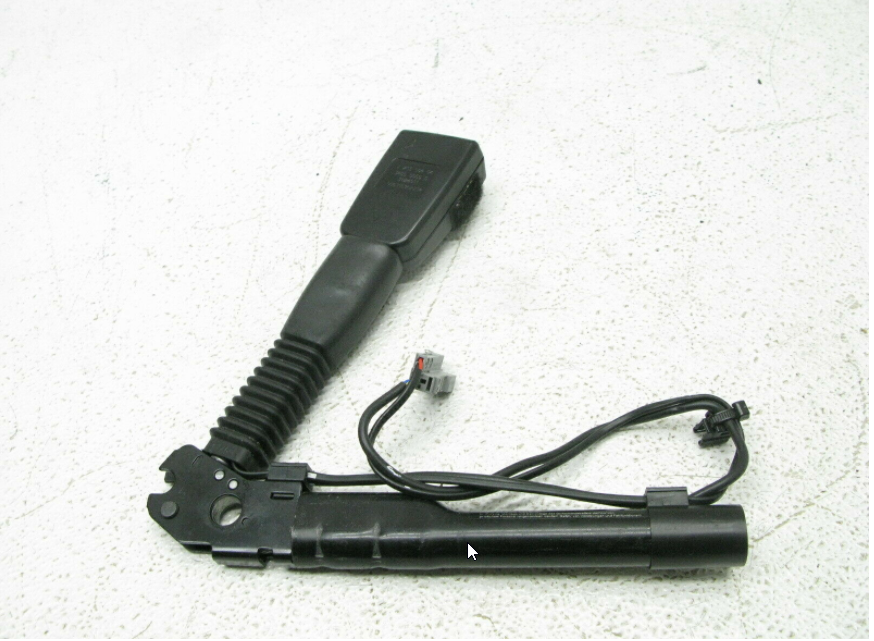 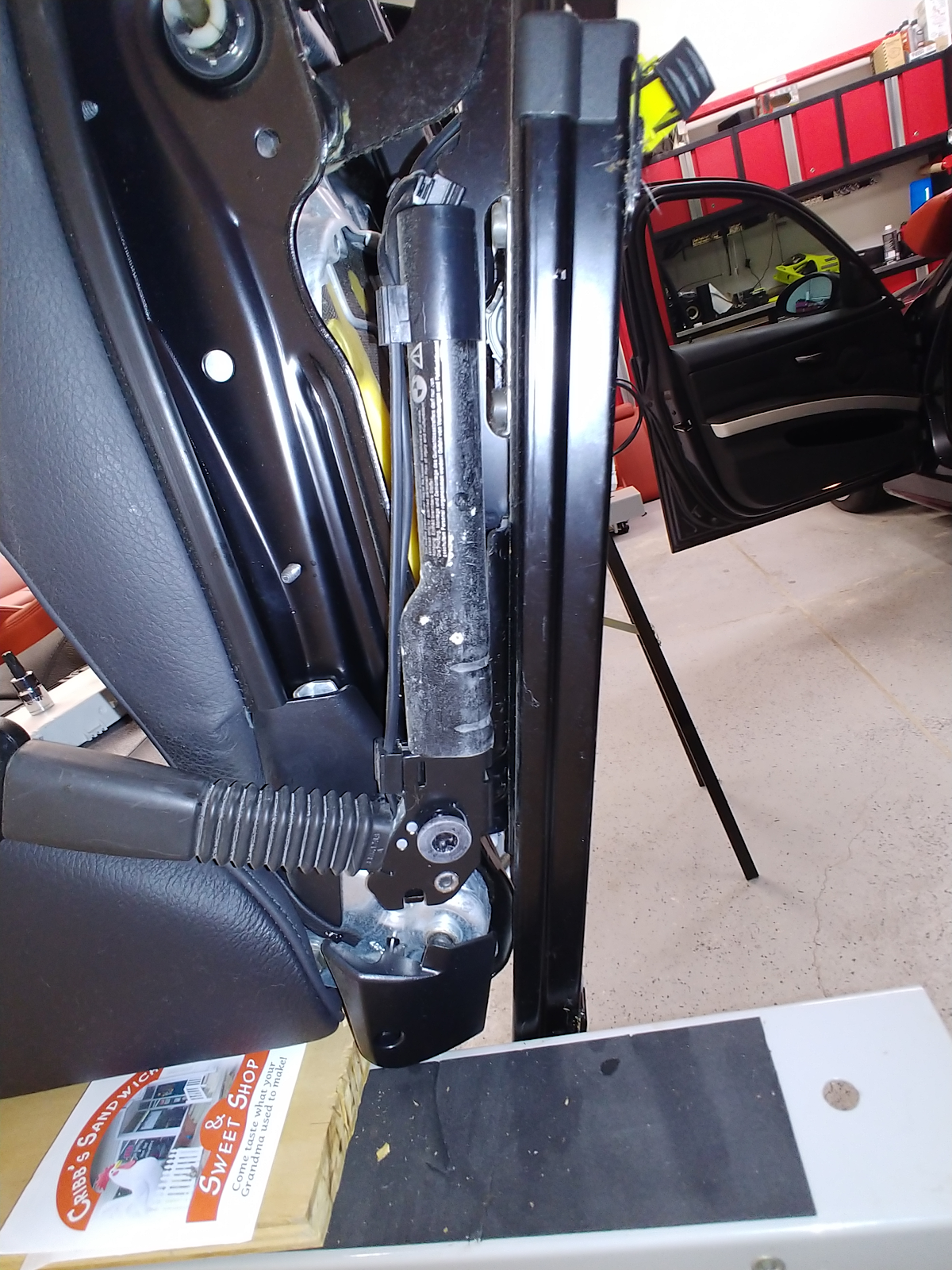 The airbag connector is easy to do. Simply remove the blue connector off of the F80 seat and put the pins into the gray E90 connectort. 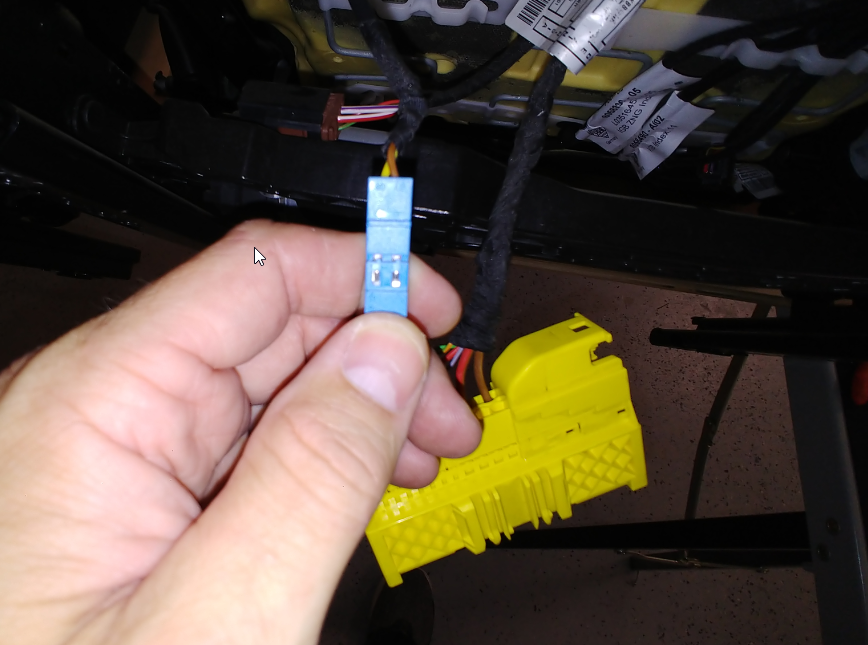 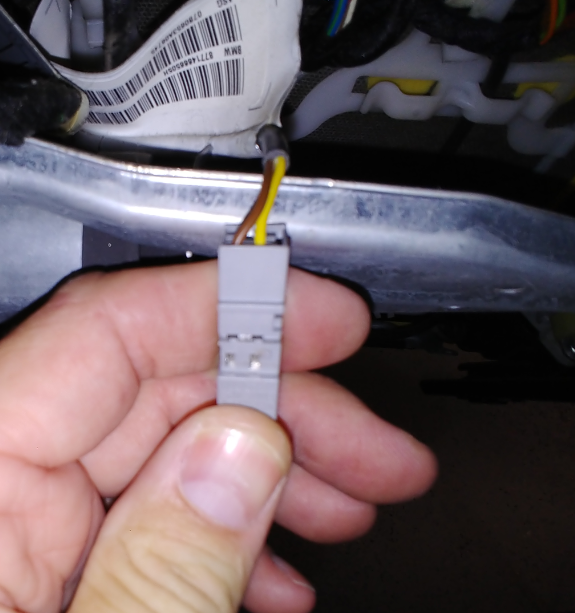 Pay attention to the colors as they are swapped.


The E90 black housing connector has 13 pins, but only 6 are populated (on my harness at least.) 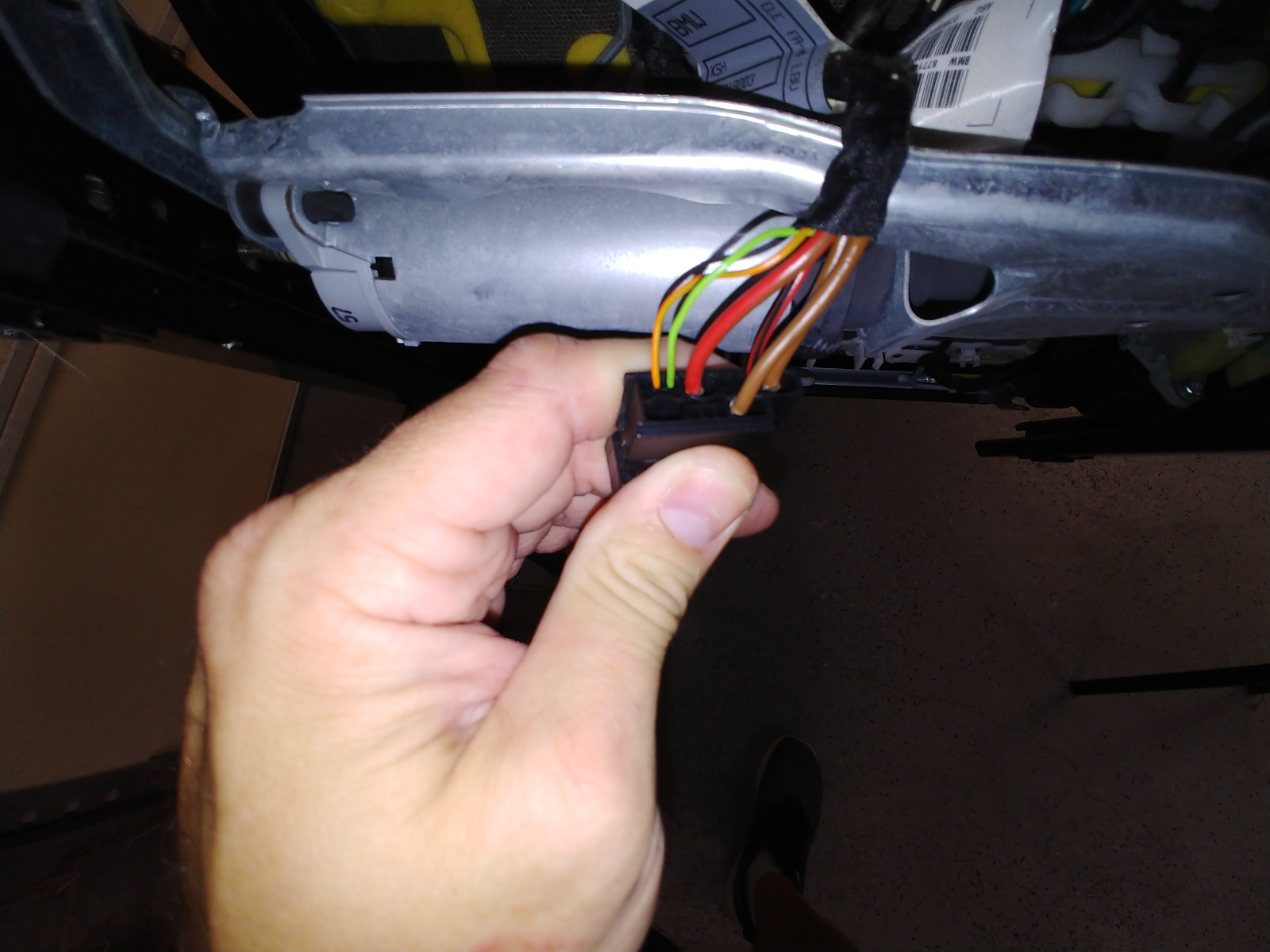 The F80/F30 I couldn’t find a wiring diagram online, but a guy in New Zealand had a thread on this topic, and he had the wires listed in his thread. 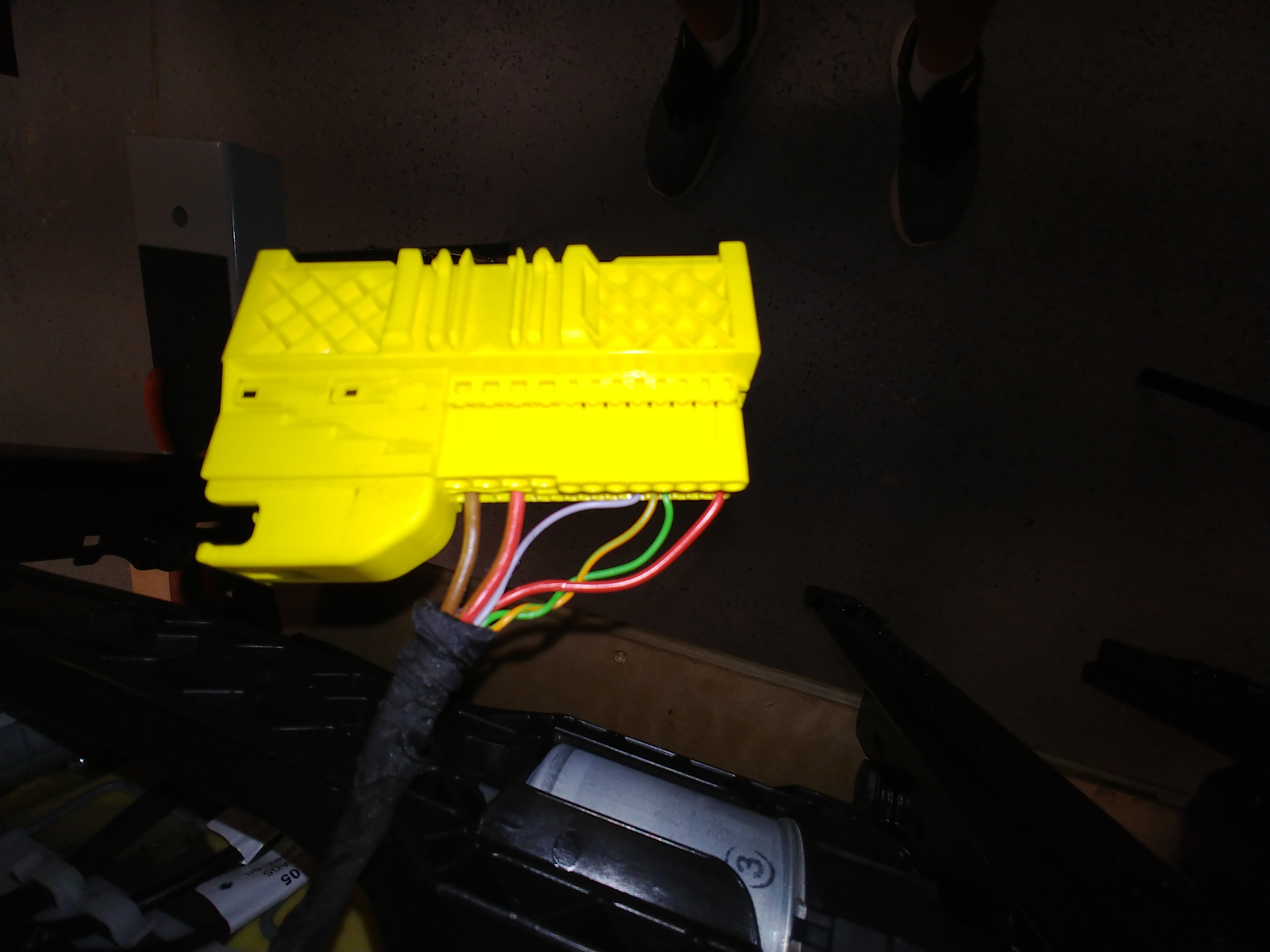 For the passenger side, it had different wires. The connector looks the same though:


The F80 seat had only 5 pins, and they seemed pretty straightforward except for pin 8.

I simply used one of the brown wires and one of the red/blue wires. I’ll probably tap both together as I presume one set of power is for the seat module and heater and the oher is for the side bolster/lumbar. My suspicions were confirmed as the lumbar on the seat is not working currently.

The occupancy sensor on the F80 seat is a different connector. I am tempted to re-pin it into the E90 harness to see if it works. Others have just coded out the occupancy sensor. I haven’t made a determination on that yet.

For the rears, I did not have fold down rear seats and the F80 seats are split, so this was a nice upgrade.

I removed the stock latches that holds the E90 seat back 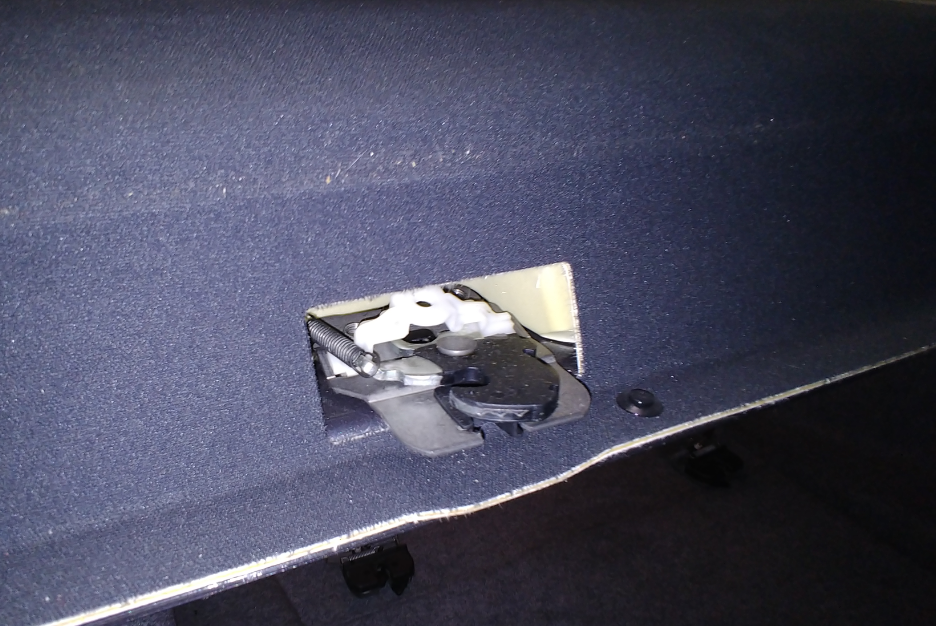 And replaced with the latches that have a release 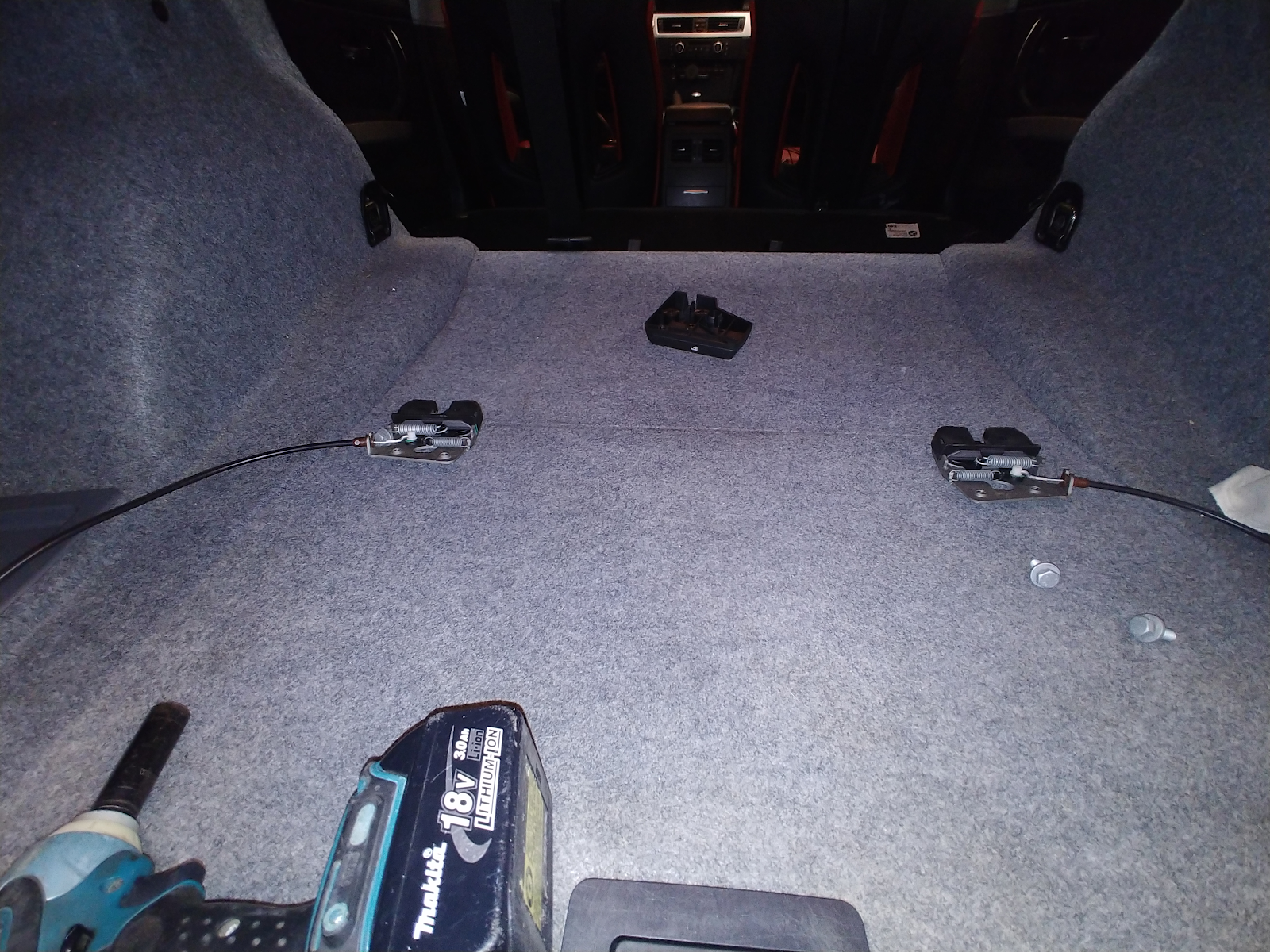 The mount points using the OEM brackets are too wide for the E90 chassis. Adam from Reboot Engineering has made a relocation kit that removes the brackets and uses an extruded sleeve to make it fit properly. He said they are going out for anodizing and then I should get mine. I currently have my seats just sitting in place with them latched at the top. No one ever sits in the back of my car and I only drive it 5,000 miles a year anyways so it won’t hurt anything as it is. 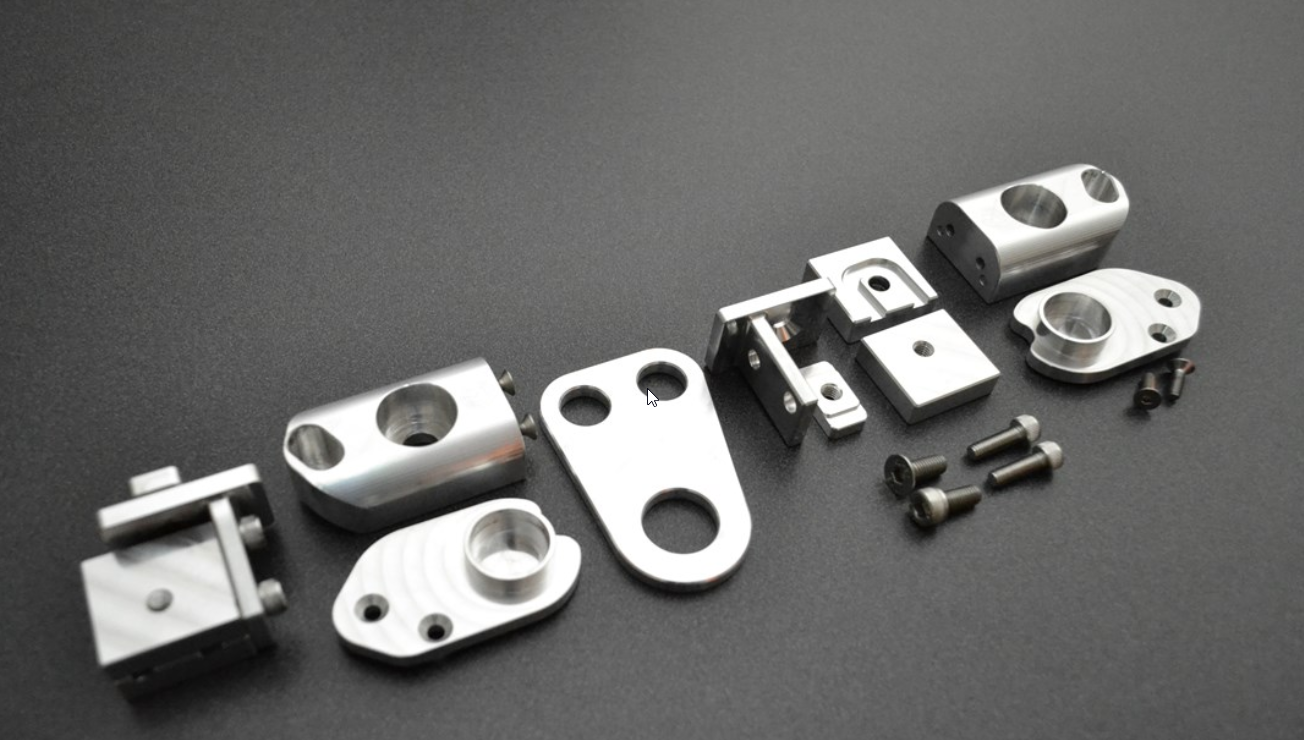 There are a number of companies that offer carbon fiber shells for the back of the front seats. They vary in price from $400 - $3,000 depending on if you get chinese no-name or some custom US company that is marking them up

I had some spare carbon fiber vinyl wrap lying around and figured I’d see how it looks, so I wrapped the driver’s seat back. 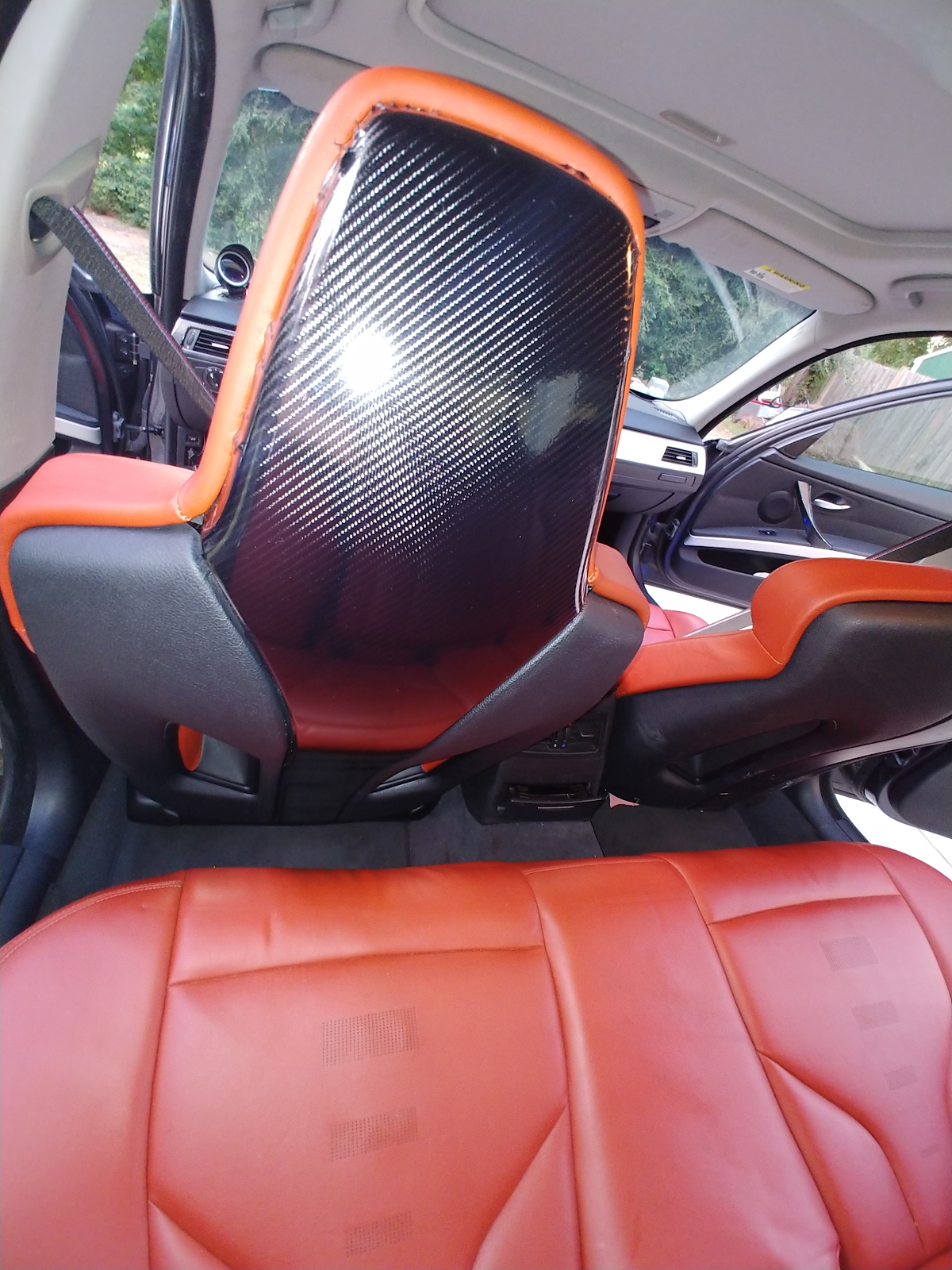 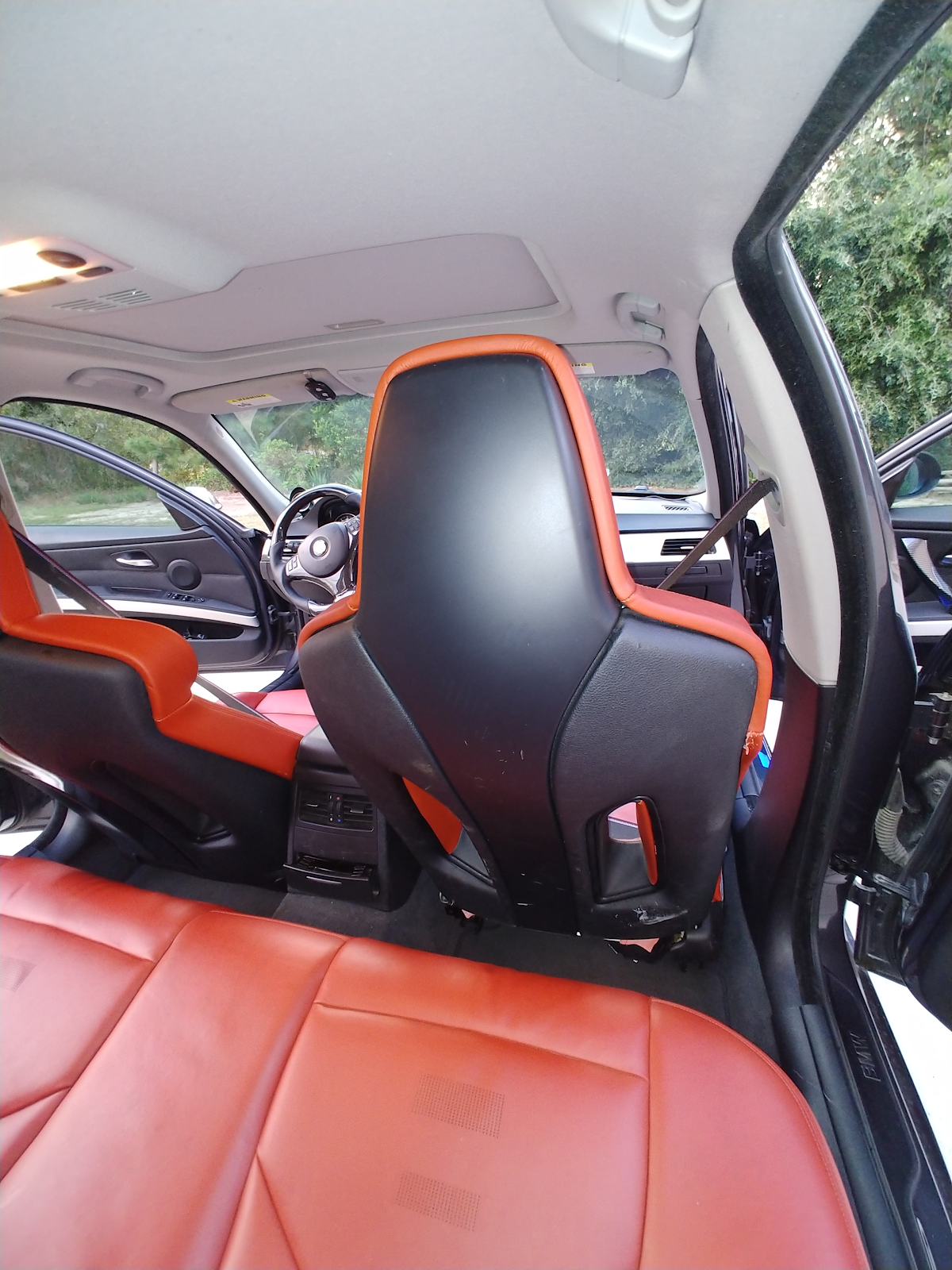 I like how it looks so I’ll probably take the seat out and re-do it. The 5D wrap is very thick and hard to manipulate, so I had some bad corner I want to re-do. This wrap also prefers to be tucked as the adhesive isn’t the greatest, so I have to figure out a solution for that, since there’s nothing to wrap around.

Note: At the beginning I mentioned that I didn’t get the rear seat. I happened across a local junkyard that had a full rear set of F80 seats in Sakhir Orange! They wouldn’t sell me just the bottom cushion, but they did give me a price on the full set that would have been what I would have paid for an F30 + dye. My rear seats were in better shape, so I used my rear seatbacks and bolsters and just used the bottom cushion. I’ll put the other seat backs and bolsters on ebay individually, they are still Merino leather after all and should recop a little.
Last edited: Sep 25, 2020
Reactions: wuX2, Itsbrokeagain, JStock_BTN54 and 7 others

Wow great upgrade ! Wouldn’t have thought the f series rear would fit... do you know if the same applies to e92s ?

aus335iguy said:
Wow great upgrade ! Wouldn’t have thought the f series rear would fit... do you know if the same applies to e92s ?
Click to expand...

The fronts definitely do, but you'd want from an M4 to have the ability to move the backrest forwrad. I'm not sure about the rear seats, but I'd suspect they'd be similar. There are some areas when the seats are folded down that it doesn't look fully trimmed out, but that's minor im m opinion.
Reactions: aus335iguy

I love posts like this. @langsbr fantastic upgrade, well explained and documented. I hope others appreciate the effort you put into providing this info! Superb and looks great!

fmorelli said:
I love posts like this. @langsbr fantastic upgrade, well explained and documented. I hope others appreciate the effort you put into providing this info! Superb and looks great!

Got so excited about the mod forgot to mention how good the write up was.
thanks for sharing @langsbr
Reactions: fmorelli

WHaaaaaaaaaat this is crazy! That looks so damn good! I've lusted over these seats for a while, shocked you can do this! Thank you for sharing this.

Thanks everyone. I wish I could take credit for everything but I used other people's info and just tried to make the wiring easier to follow, as well as try to take away some fear around removing and reinstalling seat leather.

I don't know what @doublespaces policy is for links to other forums, but I'll happily add their links of that is ok. None are on bummer boost if that matters.

We are not draconian here. Please feel free to link to any useful information!

Filippo
You must log in or register to reply here.

Anyone have 1st hand experience with Braum seats?