I can't believe I've been unable to find a thread via Google that frames up the difference. Anyone have a +/- on latest Delphi vs latest Eldors?

I believe the Eldor coils will need a dwell change if used on the N54. The dwell table on the N55's has the right settings as they use them stock afaik.
Reactions: Rob09msport

jyamona said:
I believe the Eldor coils will need a dwell change if used on the N54. The dwell table on the N55's has the right settings as they use them stock afaik.
Click to expand...

I thought they were spec'd for the N54: https://www.fcpeuro.com/products/bmw-direct-ignition-coil-eldor-12138657273#fitment

From what I see at FCP Euro's fitment list, it spans N55/N54 and others. Pages of clicking on Google search results I see zero said between Eldor and Delphi. Lots about Bosch originals but we all know that already. It looks like Eldor might have been an interim improvement from original Bosch ... but the Delphi's now used seem to cost less than the Eldor (if one shops). But still ... are they any better for higher HP applications?

fmorelli said:
I thought they were spec'd for the N54: https://www.fcpeuro.com/products/bmw-direct-ignition-coil-eldor-12138657273#fitment

Ahh maybe, but I thought people were using the N55 part # for awhile just because "they fit"

Lots of info, but bupkis on Delphi vs Eldor.

I just send my delphis back to fcp every oil change interesting about the dwell on the eldors.
Reactions: CNM135i and Sshec152

I've been running delphi coil packs for a year and a half now, same set too currently 700+ hp and haven't had any spark related issues
Last edited: Dec 1, 2018
Reactions: Hydra Performance

We know Delphi's work. We know Eldor works. I guess no particular testing has been done, at least that anyone is aware of, comparing their capabilities. The only testing/measurement work I've seen for ignition on this platform was done by @V8bait some time back, comparing R8, LS, Lambo, and BMW OEM (of unknown manufacture, given there have been 3 - Bosch, Eldor, Delphi). Superb write-up, but didn't extend to comparos of the 3 OE choices.

I tested a handful of used OEM style coils including cheap part store ones, and also tested like new Bosch and delphi, they all performed almost identical although the branded ones seemed to last slightly longer, like maybe a minute, some of the used ones without branding only lasted 20 to 30 seconds when stressed. Is that because they were old or just cheap I dunno. I really doubt eldor will test any different.

Lots of issues with this write up... specifically the "part 2" at least haven't read part 1. For one he is quoting injector mosfet specs and circling injector mosfets on the board, and talking about ignition igbt. He is worried about flyback voltage for the injectors (because that is what kills their mosfets) but he's monitoring the ignition system... that system needs the back voltage to push the primary energy over 300v, so it can get to 30kV+... he even says that happens but states it's too much, which is wrong, it's absolutely needed for the ignition (but not injection). It's why there's a 500V capacitor parallel with all the ignition coil voltage leads already. It's like he confuses or doesn't realize they are isolated systems. I think he's a smart guy but he needs to go over things again imo.
Last edited: Dec 1, 2018
Reactions: rev210 and fmorelli

@jayoma did you ever confirm what the dwell diff for the n55 coils and would they work better ? I have upgraded on my n54 but now it makes me wonder for my n55 and n63tu

Rob09msport said:
@jayoma did you ever confirm what the dwell diff for the n55 coils and would they work better ? I have upgraded on my n54 but now it makes me wonder for my n55 and n63tu
Click to expand...

Would be interesting if someone actually confirmed that... I've been running the "N54" eldor coils for years in my N55. Original coils starting misfiring at around 100k and these Eldors have been in for another 27k. I have seen people saying Eldors won't sit down onto the plugs properly on an N55 and that isn't true so I wouldn't be surprised about anything else either.

Couldn't you just port the existing dwell values within the N55 tables? That's what I did as you can see below... 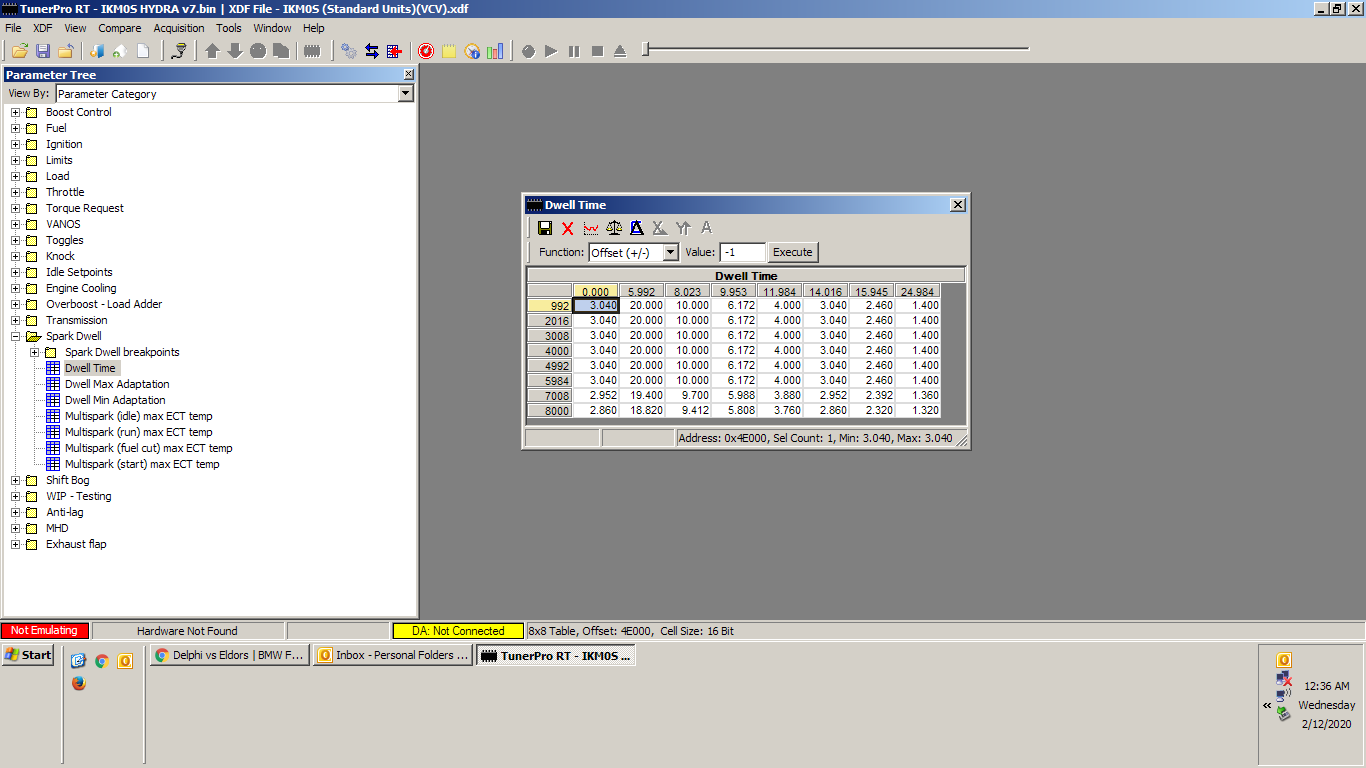 I think there are possibly enough people running both to conclude they work just as well as each other and can be found on relatively high powered cars with no tangable or significant downsides.

What seems to be apparent is that the coil upgrades over delphi or eldor are prossibly not relevant till hitting higher than 800whp or perhaps even more? maybe circuit /endurance racing is a different kettle of fish? Mine are still stock like others , making better power than most with zero issues to date. Coils arent a cost effective performance upgrade from what I can see so far(upto upgraded twins or 6266 level)
Not bashing the fine development and investigation work on coils having said that.
Reactions: The Banshee and Torgus

What we can certainly determine is that the factory parts fit and work reliably, and YMMV on other solutions.

Filippo
Reactions: The Banshee, Torgus, rev210 and 1 other person
S

Couldn't you just port the existing dwell values within the N55 tables? That's what I did as you can see below...
Click to expand...

Is this really necessary?

syn909 said:
Is this really necessary?
Click to expand...

I think that is what is being asked. If it's an n54 coil then why did he have to carry over any n55 values? Or are the n55 dwell times the actual advantage? not sure what's being said but everything else I've heard about eldor coils so far has been incorrect so I wouldn't be surprised about anything. Or is Hydra saying why can;t N55 owners just copy and past in the N54 dwell tables???

Eldor's show as an interchangeable coil for older 135i's:

I don't see how they would require any ignition changes. Unless newer rom versions/software run different dwell times?

either way, Eldor on my N55 have been just fine for years now so maybe I am missing out on something?

Had a mis-fire pretty early on with my stock delphis after the car was tuned, replaced with eldors and after 25k+ miles stage2/hybrid turbo still no ignition issues. Have had a set of PR coils in a box for a long time just waiting for the eldors to give out.

N54 and n55 coils use the same dwell effectively as the coils are basically identical other than manufacturers, which change based on deals and bidding wars generally. You can't just copy and paste the dwell tables simply because n54 uses rpm vs voltage with a temperature scaler (not in most xdf's) while n55 indexes load as well. Ultimately the dwell to saturate the coils will be the same.
Reactions: fmorelli
Show hidden low quality content
You must log in or register to reply here.