I finally had a moment to sit down and write up our performance at the Minter CA NFZ (No Fly Zone) even held over the past weekend (April 1-2).

No Fly Zone, like Shift Sector, is a rolling 1/2 mile event. We own the N54 platform record done at SS at 170.49 MPH with the same car -but last time we had some suspension issues that stopped us from being able to run our most powerful tune. We made a couple tweaks to the tune and this time we were able to run it.

Before we get into that, we made a few changes to the car to help us put together a better trap speed; we added some aero to help with stability -this slows you down a little but at 170+ you don't want the car getting squirrelly and power isn't the problem; it's traction. 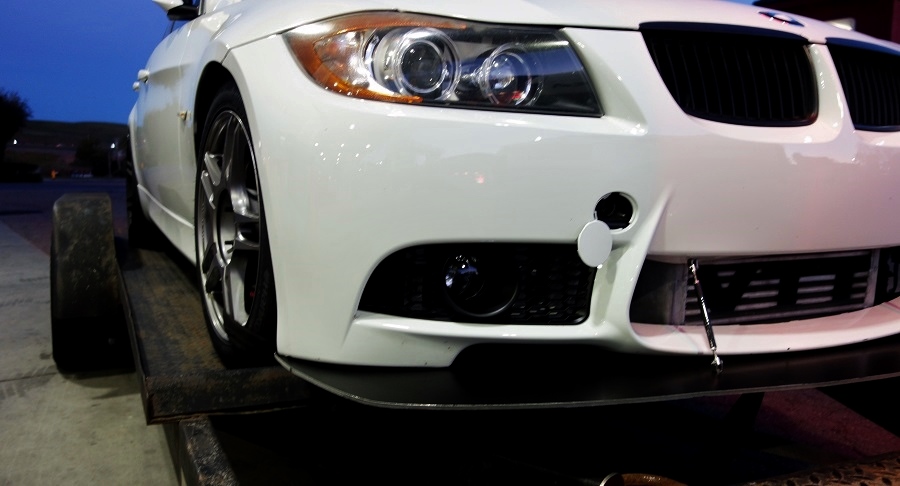 Car on trailer, way too early in the morning, check out the front aero!

Shot showing some of the rear aero.

The day started off uneventful; we put the Hoosiers on and went for a shake down pass on the medium power map. 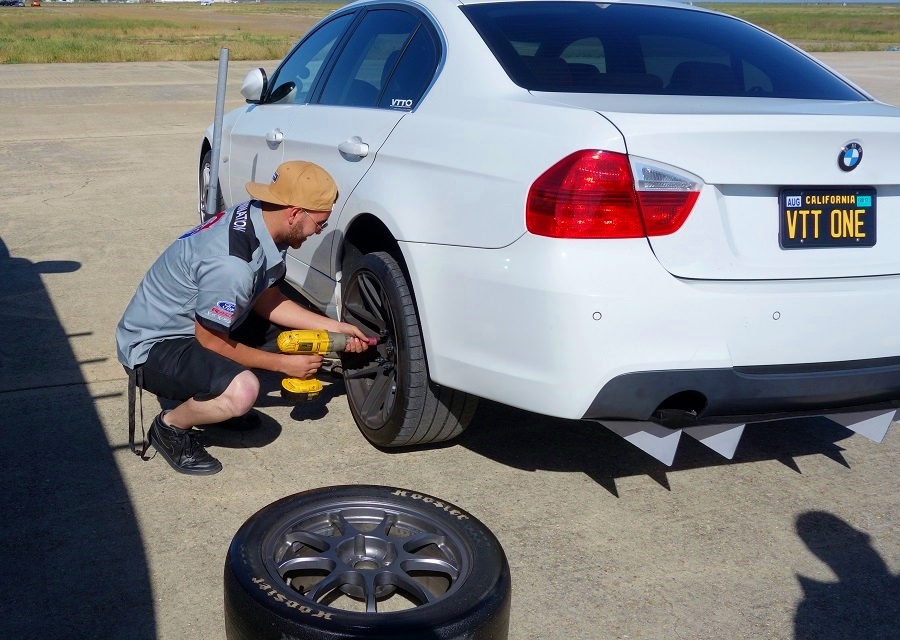 VTT Allen swapping out the tires.

Unfortunately on the shake down pass I could hear a misfire all the way from the VTT tent as Tony went into 5th gear. Second run same issue. Not wanting to fool around with too much troubleshooting, we replaced injectors. 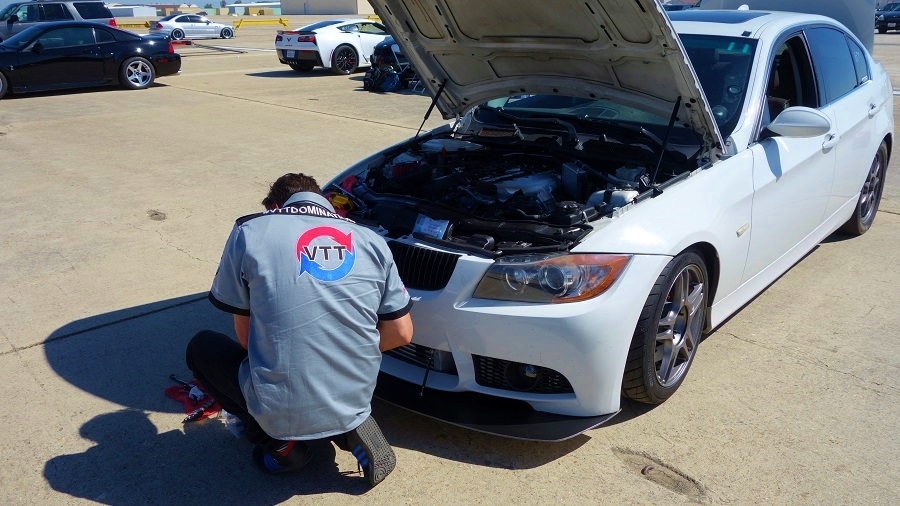 We did a quick shakedown with the new injectors to make sure all was well and then it was time to go have fun. 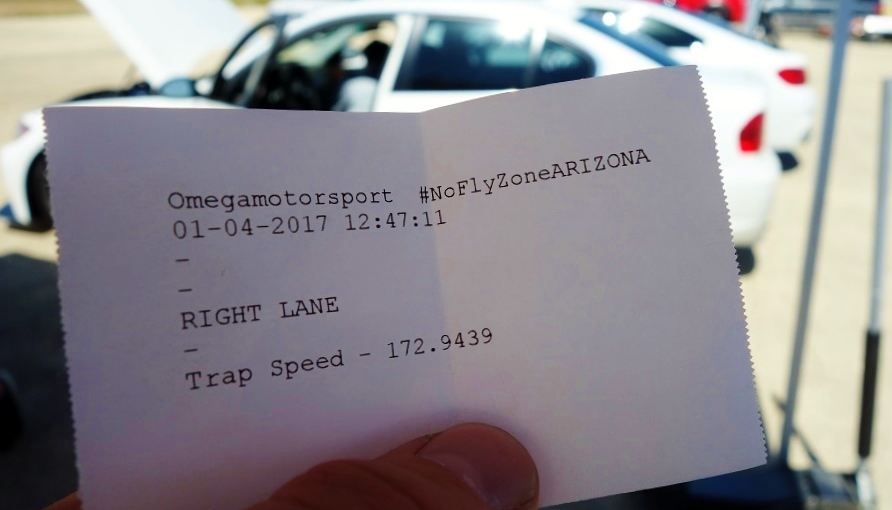 New record in hand, the day was a success and now we wanted to see if we could beat it. We backed that 172 up with 2 more runs in the 172.x range but we were having traction issues in third gear; as Tony was shifting into third we were right over a painted section of the track and just couldn't keep the car pointed straight on the most aggressive map. We tried a couple things including shifting from 2nd right into 4th (we make 600 ft-lbs at 3000 rpm so we thought it was worth a try...).

Tony remarked that the tires felt on the edge of traction in third gear on the mid-boost map, so we decided to flash boost-by-gear and limit 3rd gear a little. This sort of worked. Before we ran though, it was time for a group photo with all the BMW guys including Steve from Fuel-it! and the BMS crew (Terry/Payam). Always a pleasure with those guys.

Above I wrote it "sort of" worked. By sort of, I mean we lined up, I heard Tony nail the shifts and the car was just GONE. Very fast. Tony says he was about 150 RPM higher as he crossed the finish line. Surely this would be our 175 MPH pass and a great way to end the day.

Unfortunately for us, our ticket said 136 MPH and the tech said "yeah, we're having some timing malfunctions on that side right now". :thumbdown :lol: Oh well, that is racing!

All in all we had a fantastic day. Aside from needing an injector swap, the car ran like a top (and I'd bet a grape soda that those injectors would have been fine for anything at/under 700 whp), we got a new platform record and backed it up a few times. It's even cooler that we did it rowing our own gears in the 6MT, and we did it at full weight.

Had a blast, again, thank you to those who stopped by to talk shop or just say hi. Always a good time. Until the next time..... 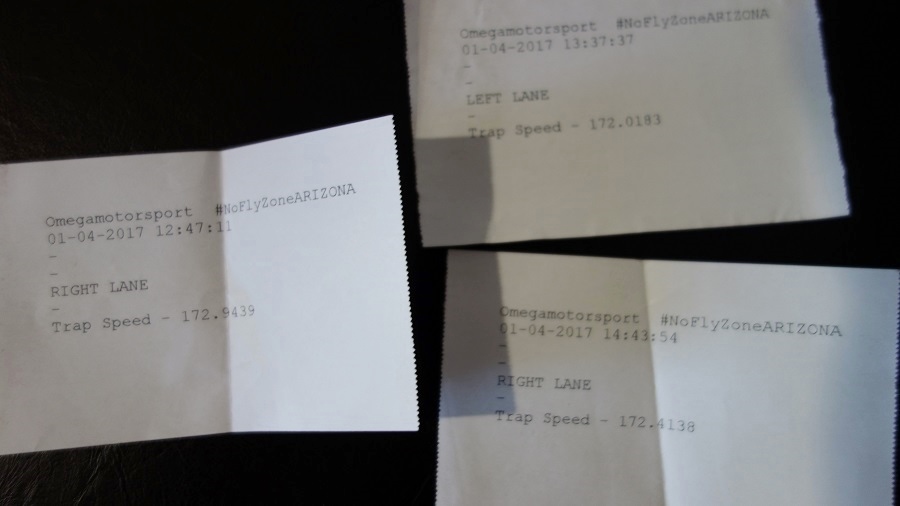 Nice! When do you think you'll get back to inspecting the cam situation? Good work!

what do you plan to do for better traction?

doublespaces said:
Nice! When do you think you'll get back to inspecting the cam situation? Good work!
Click to expand...

Hard to say. Tony was in that motor so many times before the last race that since it's running so well now he doesn't even want to touch it. lol

what do you plan to do for better traction?
Click to expand...

Better tires. 15". Slicks. Should be ridiculous.

Congrats! Would have been nice to run against that car! My car is having all kinds of vanos issues been trying to figure out.
Reactions: Sshec152 and [email protected]

Jerry @ Jpworkz.com said:
Congrats! Would have been nice to run against that car! My car is having all kinds of vanos issues been trying to figure out.
Click to expand...

Were you there? If so you should have come over and introduced yourself! Yeah, def show up to the next one if you can, we're always up for a run.

Jerry @ Jpworkz.com said:
Congrats! Would have been nice to run against that car! My car is having all kinds of vanos issues been trying to figure out.
Click to expand...

[email protected] said:
Were you there? If so you should have come over and introduced yourself! Yeah, def show up to the next one if you can, we're always up for a run.

Yeah i was up there helping a friend out with his car left early though. All the fast cars just made me feel left out lol.

Yeah that's what i am thinking, car throws misfire after 6000rpms on every pull now.
You must log in or register to reply here.