Four years ago I had a 2004 Acura TL that I was in the process of turbocharging when I realized how cheap 335s had become. I immediately changed my plans and went and bought a Sparkling Graphite Metallic 2007 335i. The car was already slightly modded, but nothing insane.

Tl. I still think the body lines on the TL are better than the 3 series! A 'dream' plan of mine would be to convert a 3G TL to RWD and install an N54 and 6MT in it. If I can find a cheap enough chassis, I might see if I could make it work! 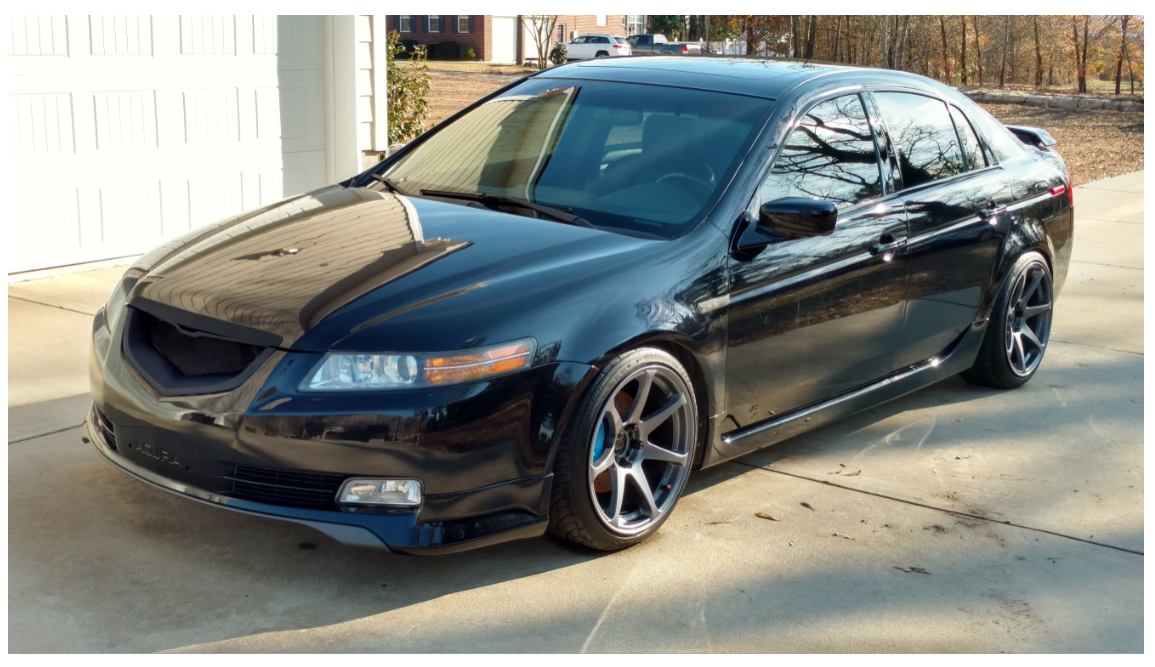 It had Apex EC7s, AR Design downpipes, Spec clutch and flywheel, an upgraded intercooler, and a custom tune (Cobb :-O). A buddy drove me to get it in his CTS-V1 with 400whp and I proceeded to destroy him every time we lined up. The stock turbos spool so fast, even 6th gear acceleration was nuts on the interstate! I was hooked, and it was not wrong wheel drive!

As delivered - so stock looking!

I had already ordered an aluminum chargepipe and Tial (fake!) BOV the first week of ownership. I was shocked the prior owner had a custom tune on the stock intake and chargepipe.

Soon after, VRSF introduced their 7.5” Race intercooler. They had a special discounted pre-order so I jumped on it. You can never have too much cooling. This thing is HEAVY and required a lot of trimming to fit.

I knew I wanted an aftermarket boost gauge and I was very particular about what I wanted. It HAD to be a stepper motor, had to look as close to OEM as possible, and had to go to 25psi. I finally found one that fit the bill - white numbers when daytime, red when lights are on. Perfect!

It matched even better once I fixed the OEM needles. I originally purchased some aftermarket needles from Bimmian - they are trash, don’t waste the time. Just do the old school sharpie - quick and works fine.

I soon needed new brakes, and instead of just doing pads and rotors, I decided to look into a BBK. I was only looking for bling, something to look better than the ugly stock caliper.

Everything I found said the direct fit brembos from the performance brake package were smaller than the stock ones. I happened across a small company some may have heard of called “Dickass brakes.” They offered “replica” BBKs. What the heck, worth a shot, right? They fit PERFECT. 4 years later they still work perfect.

I soon grew tired of the chrome trim. I never understood why chrome is so highly regarded, so I painted it flat black. I also didn’t care for the dark colored wheels. I decided to plastidip them before I painted them to make sure that’s what I wanted to do. The car looked MUCH better. I also added a small lip spoiler to give it a slightly more aggressive look.

To help the car look a bit more aggressive still, I added the front bumper lip add-ons. Not sure I would have done it again in hindsight - the look wasn’t all that great.

It needed new fog lights though since the stock ones were shot.

The car was now in need of more power, and I originally liked how Mauricio Madrid approached his turbo builds. I learned his customer service leaves a LOT to be desired though. Luckily, my turbos are still working great. I opted for the MMP S3s with coated manifolds and WPC treated bearings.

The coating while still intact, doesn’t look near as nice. It was probably the cheapest available option. In hindsight, I would’ve opted for cerakote or preferably Swaintech’s White Lightning. Swaintech is awfully proud of their coating, and it’s a bit pricey. Maybe next time.

I got a custom tune by Twisted Tuning. The tune took WAAAY longer to get to where it was what I would call close to dialed in, but eventually, I ran a 12.1 @ 128 on E30 with 25 psi. I need a tire and a better launch!

So now the car was fast (or at least fast enough for me!) it didn’t look the part. The stock front bumper is pretty ugly IMHO, so I was looking to get an M3 bumper. I started looking for an M3 hood or M3 style hood to go with it, but could only find carbon fiber for absurd money, or ugly GTS hoods with tons of vents.

I instead decided to do an LCI hood, as it looks much more aggressive in my opinion. The creases really look good, and the M3 style bumper matches nicely. I also did M3 side skirts, and M4 style dual slat kidney grills. I’ve never really done body mods to a car, so this was one of my favorite since it really started making the car look aggressive, but not flashy. Basically OEM+.

The difference is much more stark when compared directly:

China came thru for me again with a new part. I had been wanting a flat bottom steering wheel, but wasn’t going to pay the crazy prices vendors wanted. Got this bad boy on the cheap - and it looks immaculate.

3 years later it still looks brand new and every stitch is perfect.

My adaptive headlights began to not adapt, and they had tons of plastic crazing so it was time for some new ones. I had ordered a set of lenses but they weren’t for an E90 as described. The only other set of lenses I could find were Bimmerjakes and they were $250 for just the lenses. Pass. I removed one of my stock lenses and the OEM permaseal is NO JOKE. I decided to pass on the customizing plan as it takes too long and wasn’t sure I could get what I wanted.

I bought a set of aftermarket headlights. They get no love on forums or Facebook, but I like them and I get nothing but compliments in person.

To be fair, the optics COMPLETELY SUCK, but eventually I’ll retrofit a decent bi-xenon projector in them. I don’t drive much a night, so for now they are fine as is.

I ran across a local guy selling just a pair of 17” Arc 8s in 17x10 fitment. Score! They had brand new Mickey thompson ET Street RRs on them. I sold the Mickeys and bought a pair of R888Rs. LOVE THEM. But now my front and rear wheels don’t match!

I had planned to purchase a pair right from Apex’s website, but I always check their blem sheet to see what’s available. They had a single 18x9 +31 in hyper silver listed, and an 18x9 in a weird offset in hyper silver. I emailed them, and sure enough it was a typo! Got both of them for a great deal! I don’t know how or why they listed them as blems, they were perfect in every way.

Mickeys on the rear still.

I figured I was done with power mods for a while, and the exterior was looking good. I decided to change up the interior. I now had a nice steering wheel, so I started looking in to some better seats. I was considering the Braum, as many do, but I think Braum is just another chinese brand - nothing special, and you lose airbags, electronic control, etc.

I had seen some youtube videos and forum posts of guys putting F80 seats in an E90. If you’ve ever priced F80 seats, they are NOT cheap by a long shot, so I figured this was just a dream. I wasn’t on a timeline, so I figured I’d start scouring FB marketplace, craigslist, and forums to see what was out there.
I started my internet scouring and scored a phenomenal deal on a complete Sakhir Orange interior - Competition seats too! I did a write up on the install. Love these seats. I never thought I would like a red interior but it looks great.

I still have some things in progress. I’m working on changing out the M bade in the seats for something that says 335i. This is just a prototype:

I currently have the car on jackstands to fix an oil leak. It appears the oil feed line on the rear turbo is leaking and it makes a YUGE mess all the time. It’s amazing how a small amount of oil can be such a huge mess maker.

Since it’s cold, COVID is still canceling things, and I work from home, I decided to take my team, clean things up, and try to make the engine bay look better.

I have AR Design Downpipes and I couldn’t tell if they were coated - if so, it was a shoddy job. I had them dustless blasted - it’s a pretty cool concept where they mix shot media and high pressure water instead of just sandblasting. They were completely blasted and now getting cerakoted. Again, Swaintech was just not cost competitive. Interestingly, Jet-Hot now has a coating that they say compares to Swaintech, and they were nearly 100% more expensive than Swaintech. My wife has cerakoted headers on her Escalade and even 2 years later they look like they were installed yesterday and immaculate, so I have faithin the cerakote.

I’m also trying a DIY lower charge pipe on the cold side. The VRSF intercooler exit is 3”, and has a coupler to taper to 2.5” for the lower charge pipe, and another coupler that transitions to a 3” for the main chargepipe. I figured I’d give a shot at making my own full 3” lower chargepipe. We’ll see how it fits. Pictures to follow.
Reactions: Milan and Torgus
M

Badass thread man. I still have to do my f80 rear seats. I think I talked to you about that one point. The front seats are one of my favorite mods I’ve done to the car.

out of curiosity where did you get your m3 bumper ?

Milan said:
Badass thread man. I still have to do my f80 rear seats. I think I talked to you about that one point. The front seats are one of my favorite mods I’ve done to the car.

out of curiosity where did you get your m3 bumper ?
Click to expand...

Thank you! My thread doesn't compare to a lot of the excellent builds here, but I figured it would be a way for me to keep a record of what I've done. I had to go thru some old Google Photos to remember when I did some stuff, lol.

I agree, the seats are hands down one of my most favorite mods. The seats sit just enough lower that I can fit comfortably with a helmet on now and not scrape the headliner ever. The Reboot Engineering rear seat kit is really an engineering marvel. While it isn't cheap, it really makes the F80 seats fit as good as they possibly could.

Believe it or not, I got the bumper off of Amazon of all places. It was under $300 shipped and since it was thru Amazon, I knew I'd have their protections vs. dealing with just a vendor if I had an issue. Fitment was perfect. Honestly I think they are all the same manufacturer, just a matter of what seller you use. I wouldn't hesitate to get one off of ebay, as long as it's not Duraflex.
Show hidden low quality content
You must log in or register to reply here.

Technical Vargas turbos.. yes or no?