I've mentioned the new electrical system on more than one occasion including a post on this forum in 2017 and even wrote a post on the SupraMKV forums back in March 2018. I had suspected the potential validity of using a 48 volt electrical system in the G80 M3 after reading a carmagazine article which hinted as much, since the timing of everything seemed to make so much sense.

So while this news is about the G20 3 Series, allow me to provide some theory and background. When we first heard about rumors of the next gen Toyota Supra years ago, many were upset when we learned that might actually come in the form of a hybrid vehicle with a V6 powerplant. At that time, the term hybrid or electric did not correlate to performance, but rather economy, cost savings and emissions compliance. Due to this, the entire project seemed like a sell out compared to the shadow cast by it's 2JZ predecessor. However, when I read the carmagazine report which spoke about rumored features including water injection, the 48 volt electrical system caught my attention in particular because this seemed to confirm some of the previous reports of hybrid technology. While the report mentions electrically spooled turbos, something that is really only possible with a 48v and higher electrical system, I have also put a great deal of thought into the possibility of a BAS(Belt Alternator Starter) being equipped into the G80, a technology already found in Audi vehicles: 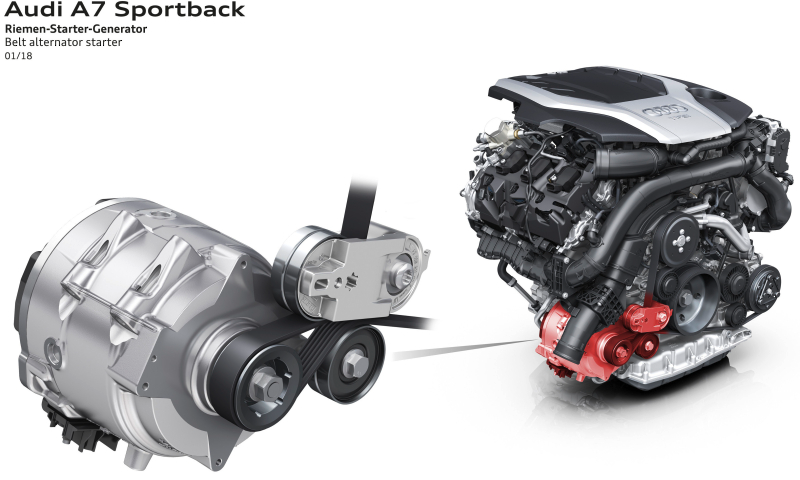 This is a hybrid technology, but is a more natural evolution as it provides an assistive hybrid approach rather than stripping displacement in exchange for electric propulsion, something simply not possible with our traditional 12 volt systems we use today.

This is not to say that an electric assisted turbocharger is not in the cards, for the G20 or G80, in fact I'd say its probably an indicator the reports are actually correct. It would seem they have at least considered or possibly tested this technology all along. BMW has filed a patent for an electrically assisted turbocharger in the past, and even BorgWarner has shown off its eBooster electric compressors(which require a 48v system):

So how does this relate to the G20? Well, based on reports we know the Supra will share an engine with the Z4, and we also know that there will be various trims of the Supra. We normally talk about the top model with the 2JZ-GTE, but there were also non-turbo versions using the 2JZ-GE motor. So given this information, it would stand to reason the engine shared between the leaked Z4 and Supra may not in fact be the top trim available, since when has the normal Z ever had the top M engine? Unless we've been looking at the Z4 M all along in the spy photos, we can assume the Supra doesn't have its top motor in it either. We have the M3 representing the pinnacle of the 3er brand and M340i showcasing the top non-M model, there are likely similar trims of the Supra which have been turning up in the news. These leaked Supras are most likely just the 'M340i' versions.

To further support this connection, we know that BMW does not typically make a TU version of its M engines, and we know the S58 is the next powerplant coming up after the S55. With the B58TU being the B58 successor in the G20 which reportedly includes these 48 volt upgrades, I think its safe to say that due to BMW's modular approach we could make the argument that the next Supra RZ or whatever they call it, and G80 M3/M4 will sport the S58 with potentially a 48 volt flavor as well.
Reactions: Blue335is, Jeffman, Ace718 and 1 other person

Porsche has also stated their last combustion engine 911 will come around 2030. That means the G chassis vehicles could actually be the last BMW vehicles with combustion engines as the main source of propulsion.
You must log in or register to reply here.