Doh! (I'm not afraid to look like an idiot.)

"I'm not afraid to look like an idiot."
- Anthony Bourdain

I was just reading another post where a member admits to making a stupid mistake while working on his car. I thought that was very brave of him. So I thought I’d start a thread where others can also admit to their “Doh! moments”.

Here’s mine to kick things off:

While installing the BMS oil thermostat bypass I failed to reinstall one oil cooler housing bolt before starting the car. Oil sprayed all over the engine bay. Doh! Luckily the hood was open at the time so I could see the oil spraying from inside the car and cut the engine immediately. (Who knew oil pressure could build that quickly haha) It took me hours to clean it all up.
Reactions: Ace718, NoGuru, boostE92d and 1 other person

Where I should start is probably the hardest part.

My first 335i had a clean title and a messed up front end, clean frame, etc. During the rebuild process, I got the tie rod repaired the same day I installed a CF hood. I didn't have the hood latch installed yet, but wanted to idle it around the cul de sac to make sure things worked. Everything went well, then I decided to feel it boost once and the hood flew up and shattered on my roof. 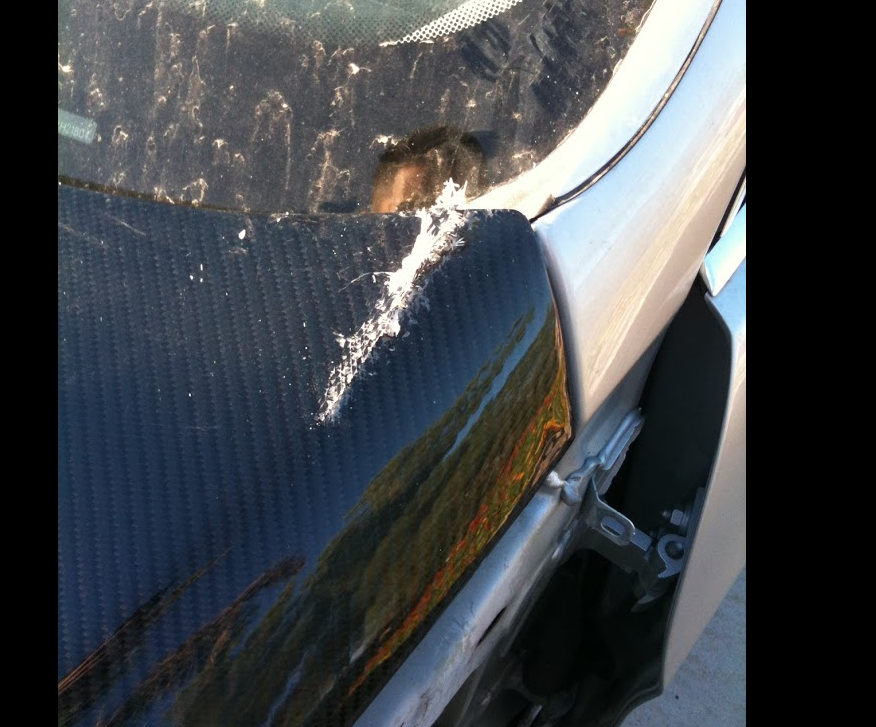 I generally get rushed by my peers when I'm putting my car back together and forget to torque all my lug nuts once I put the car on the ground. It's happened three times now, and I usually drive around with loose wheels for a day or so before I remember. Doh.
Reactions: matreyia, boostE92d and Jeffman

I already love this thread because I feel like I could contribute a ton. Sadly.

I was swapping out my E60 cluster for an M5 cluster with the cool lighting, oil gauge, etc. I already successfully removed the eeprom, re-flashed, re-soldered it without f-ing it up. installed it - tested it.

I decided to wrap up my custom install of the escort passport 9500ci and put the LED indicator into the cluster so it looked just perfect. I needed just one tiny little hole to get the wires right where I wanted it.

Now, I have some pretty good wood-working tools so I chose my best drill bit to get a nice controlled hole because taking the cluster apart had too much risk - one more time taking the needles off, one more time doing etc and I was sure to break something.

So I start to drill the perfectly controlled hole in the most perfect spot to get the best placement anyone every saw of a custom installed radar detector LED indicator.


.005 seconds into the drilling operation and my drill bit grabs hold of the plastic like a teenage boy grabbing his first pair of t$tties and wouldn't let go. I drilled that F4cker 3" across the circuit board and broke 10 different tiny trace lines that make the electricity go in all the right places.

I gave an attempt at fixing the traces... bought another cluster and started over. No energy to even try the LED indicator.
Reactions: JayG335, Torgus, kayzrx82 and 4 others

Yep, your heart just sinks. You can't even believe what just went wrong because it never even occurred to you that it could fail that way. Most of mine involve not being aware of the fact that there was a tool to do that job. It looked so simple, and went so wrong. Thank goodness for forums and smart friends. I just assume there is a better way than what I thought of, and search for it.
Reactions: Ace718

I recently broke an easy-out off in my head. That was fun. 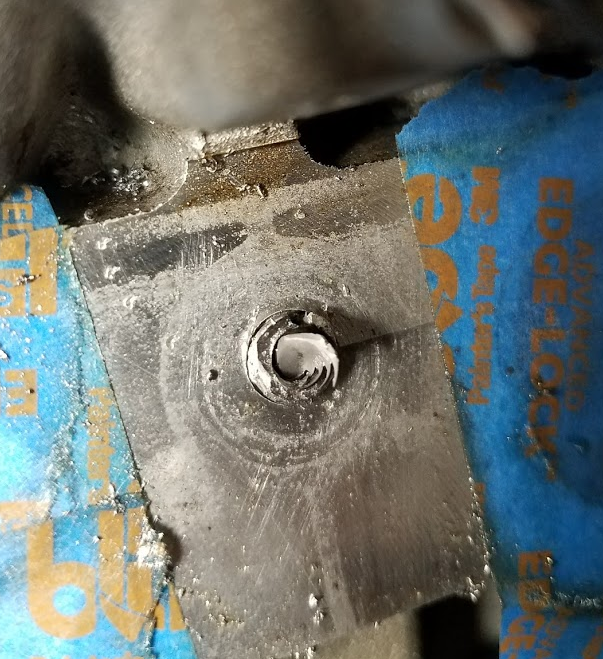 I believe jeffman is mentioning me in the first post I will share again.
So I was installing the Motive Flex Fuel kit and did the electrical like it was nothing. I got to the ethonal sensor and decided to install it in the engine bay near the firewall. Pulled what I thought was the fuel line where the sensor would go but I could not for the life of me figure out the hose adaptor ends and how they would connect to the stock hose.
To wrap it up, I pulled the wrong hose. It was a vacuum line. Called a friend over and had many beers laughing at what I had just tried to do.
Reactions: Jeffman

Indeed, it was you!

NoGuru said:
Called a friend over and had many beers laughing at what I had just tried to do.
Click to expand...

So this was a win either way!

A young friend of the family drained his transmission instead of his engine.

Then continued this screw-up by adding about 6 qts of oil to the engine.

Then continuied this screw-up by driving the car.
Reactions: SlowE93, NoGuru, doublespaces and 1 other person

NoQuarter said:
So this was a win either way!
Click to expand...

It was a win since the car pulls very hard now.
I did end up tearing it all down the next day, DCI, Charge pipe, throttle body, and pulling the sensor and reinstalling it all.

Son's m-technic 318ti was down with a major head redo. Needed a daily driver for him for school. Instead of buying an E46 (we're a BMW family - I've probably owned 20+), I decided I could save money. So about 18 months ago I buy a Nissan Altima and forego buying cost and have less maintenance. 125k mile car for $2200. I was doing great, and had a shitbox that I could care less what went on with it.

Few months later, it needed a cooling system. Damn the parts are cheap. Only car I've ever seen with two thermostats (it's a 4 cylinder!) ... then tires. Then brakes and rotors all around. Then battery. Then headlights. Transmission flush. Then a starter.

Then last November it ate a head - overheated. Turned out the cheap-ass radiator I bought (remember I said parts were cheap for the Nissan aftermarket) had a slow leak. $50 radiator caused the head gasket to go. Why? It got seriously cooked. So I teach my sons how to fix things (life skill IMO). We pull the head, send it to my machine shop. Next mistake I have my son take it without specific instructions. It comes back with just the head milled flat (I wanted the shop to go through the whole head). $75 - at least it was cheap. So we reinstall - big pain in the ass. I go Felpro on the gasket set (no more cheap).

Car starts and runs great. For a week. Then starts to act up. It's blowing exhaust by the manifold. Strange, new exhaust manifold gasket. Pull steel one and put a different gasket it, retorque. Same problem. Just order an exhaust manifold (I lied - back to cheap parts). Install. Same problem. Now I'm confused. Pull manifold again. Put a straightedge on the exhaust manifold - cheap aftermarket shit. Not even flat - so I go down in my guitar-making shop, blue the manifold face, and grind the manifold flat on the stationary belt sander (3 aluminum oxide belts and probably 3/16" of steel removal). Now we install ... and it leaks.

I'm at a loss. Several exhaust gaskets - that's not the problem. Manifold ground flat. Can't be the problem. So I take a straightedge on the exhaust ports of the head - way off. Turns out the head got so hot it had twisted - the machine shop had milled the bottom flat as my son requested.

Unlike @NoQuarter 's story, I don't know when to let go of the shovel. I got this. So I pull out a 3"x8" Diamond plate (used for sharpening plane blades), blue the exhaust ports, and proceed to hand mill the exhaust ports flat. I took off a lot of aluminum head material. Finally re-install the exhaust manifold. Loose a couple threads by now - a few helicoils solve that. Car continues to run meh - head gasket on its way out again.

I finally realize the head was so warped that I was down a rat hole. Tired of nearly two months of screwing with my $2200 Nissan "deal", with half a restoration worth of parts in it. Beaten. Dismayed, we sold the Nissan to $500 to another optimist. I had easily put $4,500 in parts in that car in 15 months. Should have bought an E46 - at least I know how to keep those alive. I lost two months of time, too, working on shit I didn't care about. My son, beleaguered, was not excited to work on getting the 318ti back together. 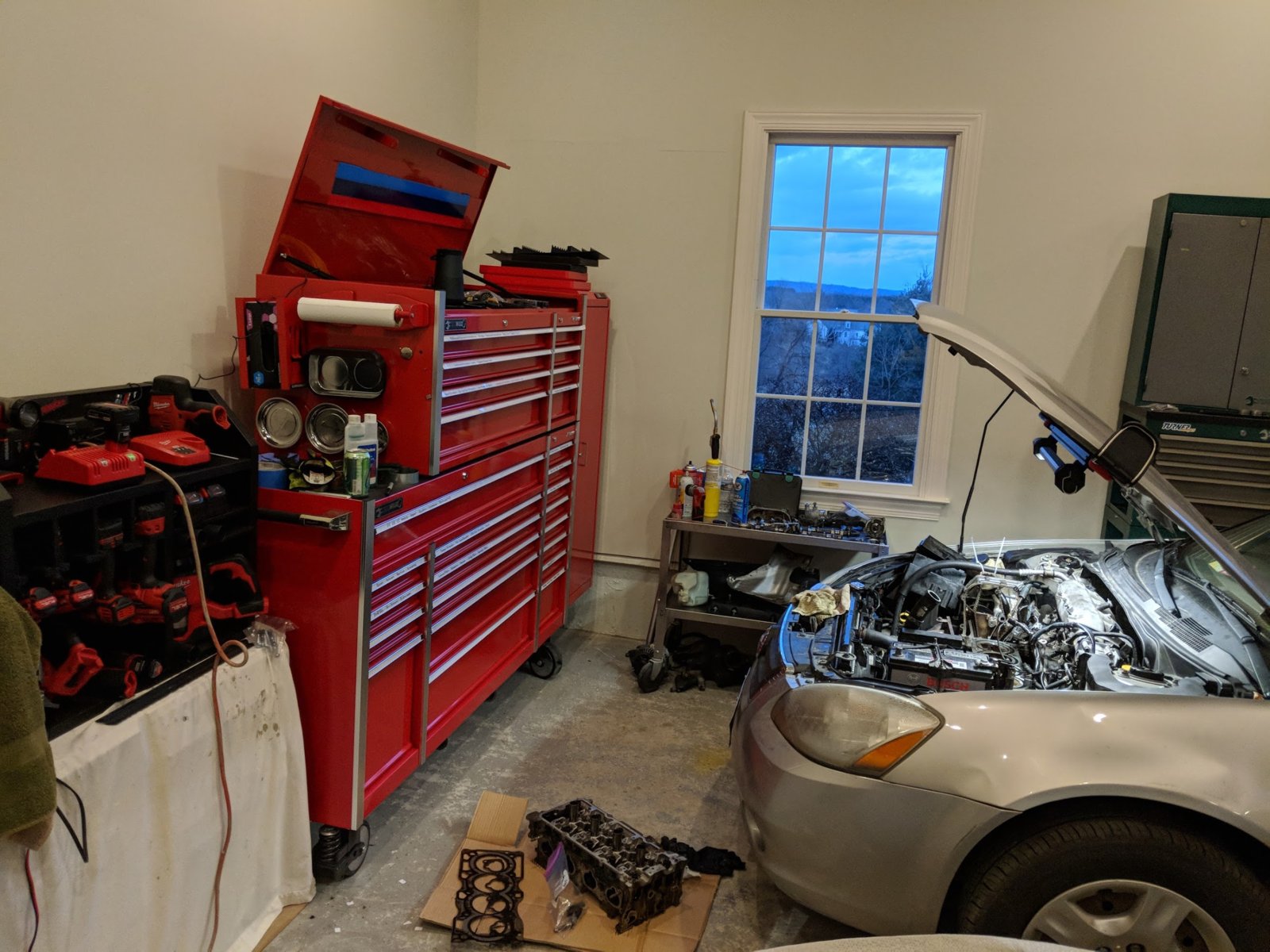 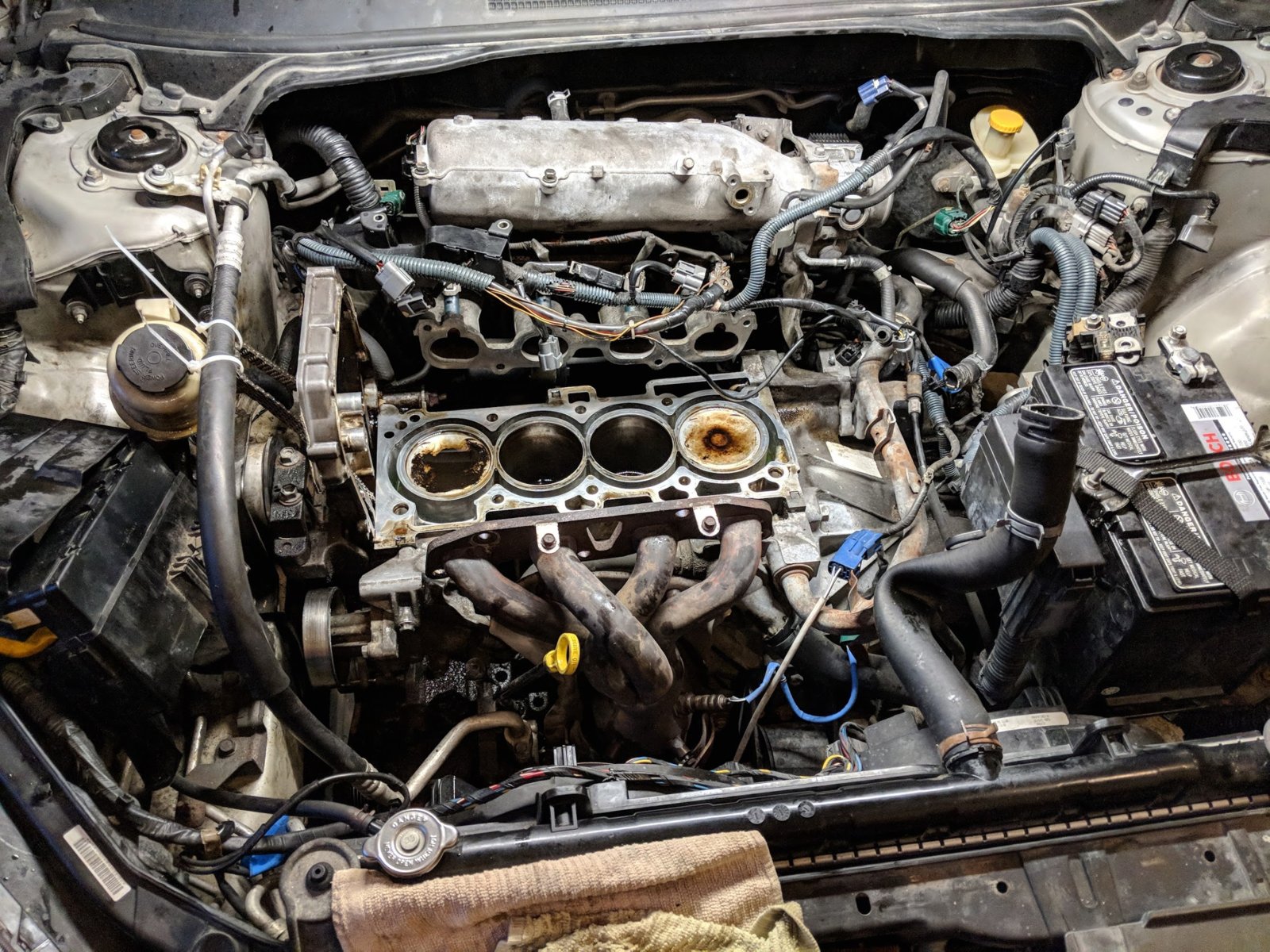 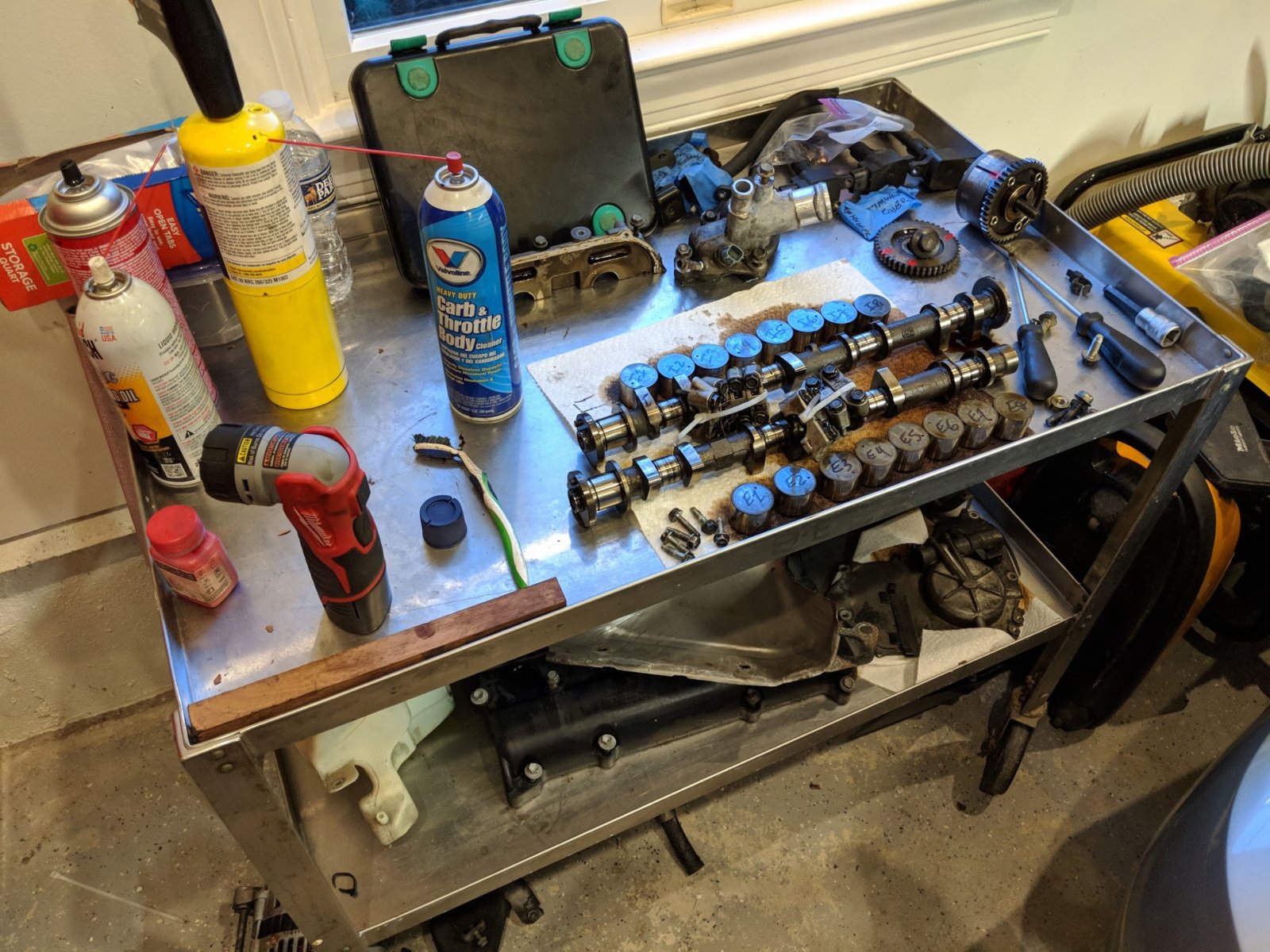 Hmmmm. Anyone ever forget to reconnect tmap sensor on cp then shit your pants on restart?

How about not completely connecting the ATF front cooler lines and calling AAA after your atf lines explode and spill all fluids on road?
Reactions: Jeffman and fmorelli

matreyia said:
Hmmmm. Anyone ever forget to reconnect tmap sensor on cp then shit your pants on restart?

How about not completely connecting the ATF front cooler lines and calling AAA after your atf lines explode and spill all fluids on road?
Click to expand...

Haha I did the tmap sensor once. And also when I first got the car I forgot to reconnect the brake booster line and was oh shitting when trying to stop at the end of my street
Reactions: Jeffman and matreyia

Back when I had a Dodge Ram 1500 quad cab 4x4, I backed out of the driveway and as soon as my front wheels dropped off the curb, I suddenly wasn't able to back out any more nor drive forward. I was stuck half way in the road.

Called in to have it towed in to the dealer then went to work.

They called me later with the "problem". The on-floor shifter to switch between 2x2 and 4x4 had popped into neutral.
Reactions: Jeffman and fmorelli

I did that with dodge 4x4 when picking up furniture I had bed full and back seats packed with pieces sticking through center we pushed right into shifter and slightly pushed out of 2wd just enough to make horrible sound when trying to engage drive. Worse part is unloaded everything and truck started working reloaded canceled tow truck and realized what happened as i drove home.

I start rushing the saws-all when I'm cutting out the front intake pipe for that snazzy new set of silicone inlets that just came out. Just need to get that last part of it from a different angle, that happens to hide that hard AC line.

Just remembered this one looking at another forum....

Back in HighSchool I had to pull the engine out of my Fiat X19. While putting it back in, I needed to find Top Dead Center so I used the ONLY reasonable tool I could find with about 5 secs of work.

I stuck a wooden pencil through the spark plug hole and turned the crank until the pencil was as high as it would go. Or until it snapped in half requiring me to remove the head to get it out.
Reactions: veer90, Jeffman and NoGuru
V

I thought it was a good idea to use zip ties to fasten the fuel lines to the fittings on my DIY stage 3 twin walbro 450 LPFP. The same fuel lines that see 80+ psi

It only took 2 miles for a line to pop off and leave me stranded in a parking lot. Thankfully I had AAA.
Reactions: Jeffman
You must log in or register to reply here.

P
Whining noise while in vacuum and boost

Smoking N54 on Decel and Boost

P
Turbo shot or something else?