You are using an out of date browser. It may not display this or other websites correctly.
You should upgrade or use an alternative browser.
B

With the effects of COVID and curfews from rioting I've been bored the past three months. I wanted to share progress with my build and some new hotness I've been testing and working on with @jyamona and @m18performance. This build isn't finished by any means (is that even a thing?) but I'll try to update this as things progress. I'll spare you the detail of maintenance related items. Here's the basics:

And here's some pictures to get you started.

First off, lets talk about the JPdoesn'tWorkz manifold. I bought this manifold used a couple years ago and it must have been one of his first manifolds as the fitment was beyond terrible. I had to shorten both wastegate branches and weld on new flanges, one of the primaries had to be "massaged" with a hammer to clear the already custom water pipe, the provided wastegate dumps were useless and ended up being remade and finally the rear O2 bungs were welded on the wrong side of the downpipe meaning they were pointing at the floor of the car with an inch of room above them. I ended up have to cut off both v-band flanges, welding new bungs on and flipping that section of the downpipe. To be honest, I should of just made a new downpipe from scratch but oh well.

Moving on, this car is running an experimental dual HPFP system that @m18performance, @jyamona and myself have been working on. I can't say a lot about this but car has the factory N54 HPFP along with a cam driven Bosch HDP5 that is controlled by the DME. All connected with hard-line using factory fittings.

Another experimental item on this car is a MAC solenoid being controlled directly by the DME thanks to @jyamona. Frequency and duty cycle control were verified with my scope (see below). So far this is working very well with no issues and is providing smooth boost control while keeping the PID feedback loop intact (if you want). 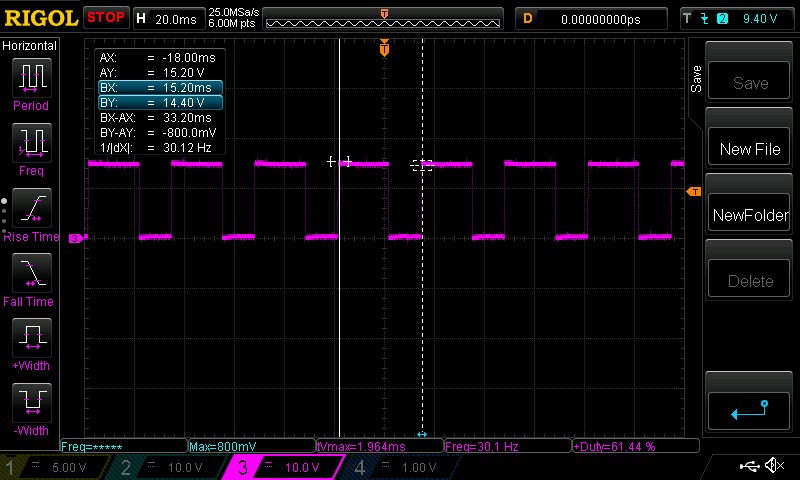 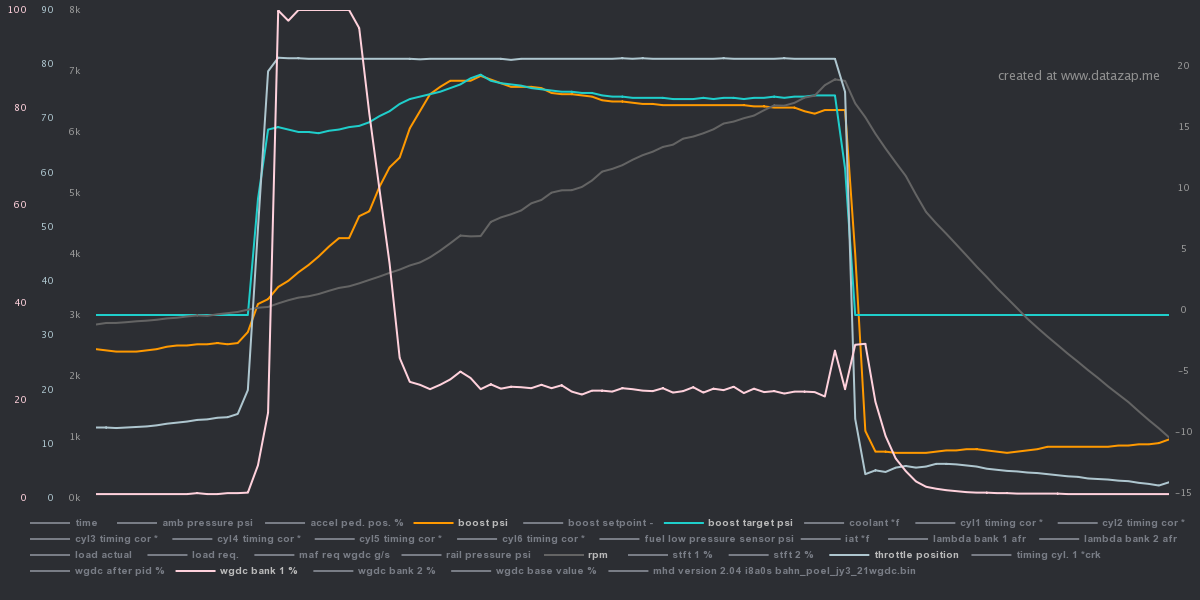 Moving on to the fuel system, this car has more fuel than I know what to do with to be honest. In the trunk I have a 1/8" laser cut aluminum panel that's replacing the ABS insert. Mounted to that we have a Radium Fuel Surge Tank with two walbro 450's installed. The factory lift pump remains to fill the fuel surge tank and is still volume controlled by the DME with the factory EKP. The primary walbro 450 pump is volume controlled by the DME as well with another EKP. The second walbro 450 pump is relay controlled and actuated by the DME. Also mounted to this panel is an ethanol content sensor (running out of room in the engine bay...). Up front the car has a fuel distribution block for feeding both HPFP's and the M18 port injector fuel rail. Pressure is regulated with a Radium FPR. 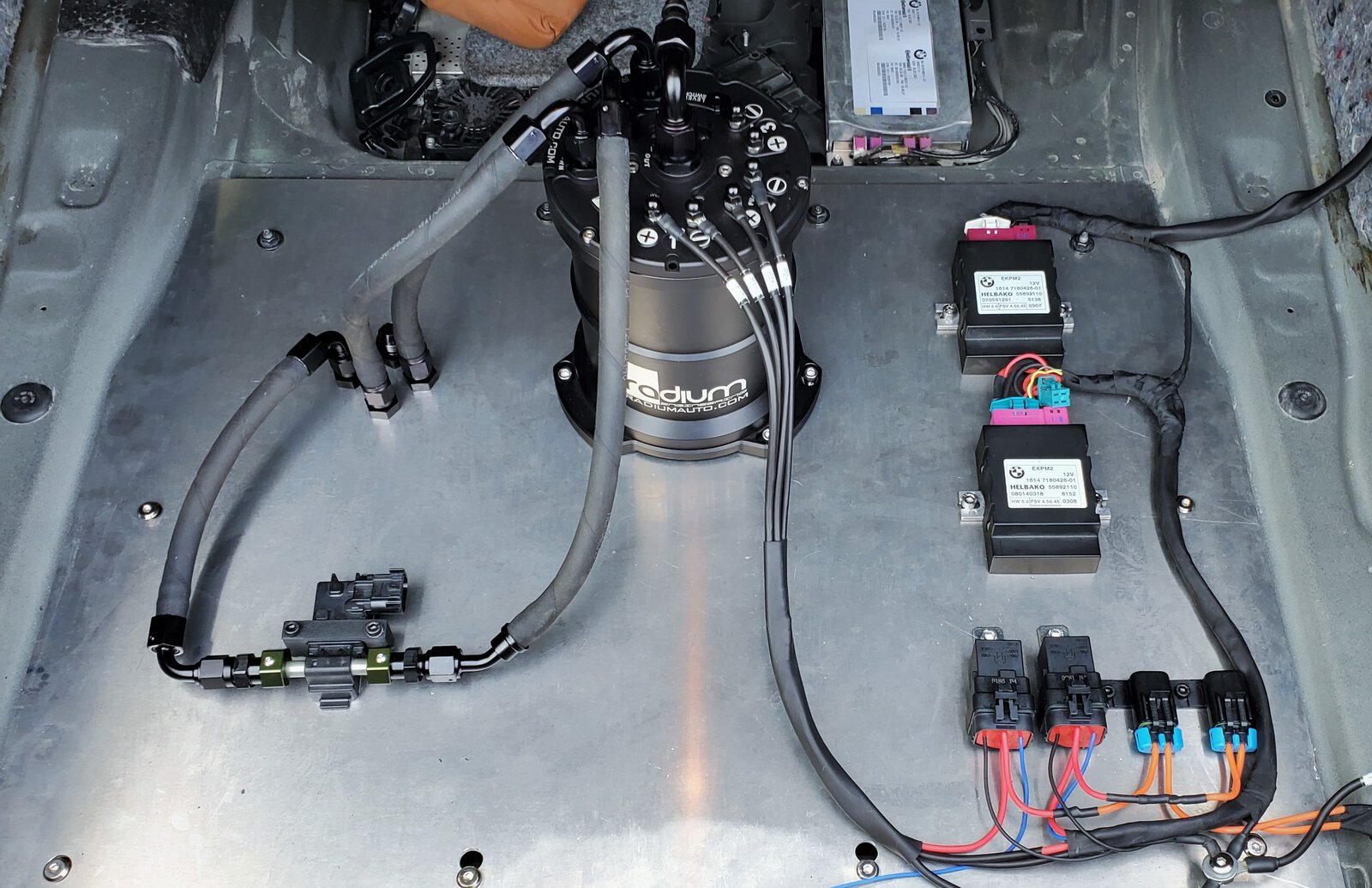 Lastly I've replaced the factory expansion tank with a universal tank from Radium that's mounted to the strut bar via welded tabs. I tapped into the heater core return line and capped off the factory feed barb that's normally used to clean up the install and remove an additional hose that would need to cross over to the drivers side. I've probably forgot other things but that's all for now. Let me know if you have any questions and I'll do my best to answer them.
Reactions: Slideways-inc, derekgates, seb.apprenti and 18 others

That aluminum plate holding everything together looks bitchin! Reminds me of my days in the ChemE lab. Nice setup! Can’t wait to see logs.
Reactions: twinturbos and bahn

What's the secret to changing the WG solenoid frequency? Will that be coming out in the XDFs soon?
B

EDIT: Thanks your finding and reading my post. Unfortunately, Spoolstreet is no longer a neutral platform where we can have honest discussions on subjects and products freely.
For this reason I have deleted all information I posted on the forums.
Last edited: Dec 25, 2020
Reactions: Jeffman
B

Allhough I would never place the E sensor there if you are going to do anything with flexfuel. It needs to be as close to the engine as possible.
Click to expand...

Only really causes readings to change prior to that fuel reaching the rail. Isn't an issue for me as I live in the Midwest and the car runs on straight pump e85. Only being used for informational purposes. Thanks for the comment.
B

hardparker said:
What's the secret to changing the WG solenoid frequency? Will that be coming out in the XDFs soon?
Click to expand...

I'm sure @jyamona will be releasing it after it's been fully vetted.
J

jyamona said:
Won't be in XDF as is it was a very involved code change. Flash time checkbox(es) for 30Hz definitely, and 10Hz (maybe) for 4-port.
Click to expand...

So, this will effectively replace the boost box, yes? Sorry for the noob question...I’m way more of a hardware than software person.
J

The Convert said:
So, this will effectively replace the boost box, yes? Sorry for the noob question...I’m way more of a hardware than software person.
Click to expand...

Yep, no need for any external hardware whether it be that or the GFB controller others have been using.
Reactions: Twisted Tuning, v.i.335is, chrisdfv and 7 others

So, let me count up the goodies:

jyamona said:
Yep, no need for any external hardware whether it be that or the GFB controller others have been using.
Click to expand...

What's the timeframe you're shooting for on this?

I'll wait with installing the BB if it's sometime soon and 4port is supported.


Extreme bonus points if you can find a way for scramble.

bahn said:
Lastly I've replaced the factory expansion tank with a universal tank from Radium that's mounted to the strut bar via welded tabs. I tapped into the heater core return line and capped off the factory feed barb that's normally used to clean up the install and remove an additional hose that would need to cross over to the drivers side
Click to expand...

Can you show photos of this?
B

doublespaces said:
So, let me count up the goodies:

No single bank yet but Jake and I have discussed it. May be working on it in the near future.
B

doublespaces said:
Can you show photos of this?
Click to expand...

I'll take pictures tomorrow for everyone.
Reactions: Eson_, doublespaces and The Convert
H

Subd to hear about the hpfp and watch your build come together. Thanks for sharing!
S

@doublespaces Here's some pictures (sorry for the god rays coming off the charge pipe) of how the expansion tank is connected. The bottom port of the expansion tank connects to a tee fitting on the drivers side rubber portion of the heater return hose. This is the same hose that transitions to hard plastic and is bolted to the subframe just in front of the engine.

Here you can barely see the 3/4" bypass cap that is installed on the factory barb that went to the factory expansion tank.

Here's a picture of the heater core return line. It's upside down in this picture so the left side is the drivers side and the right is the passenger side. I put a red box on the factory expansion tank hose that gets removed and capped off. 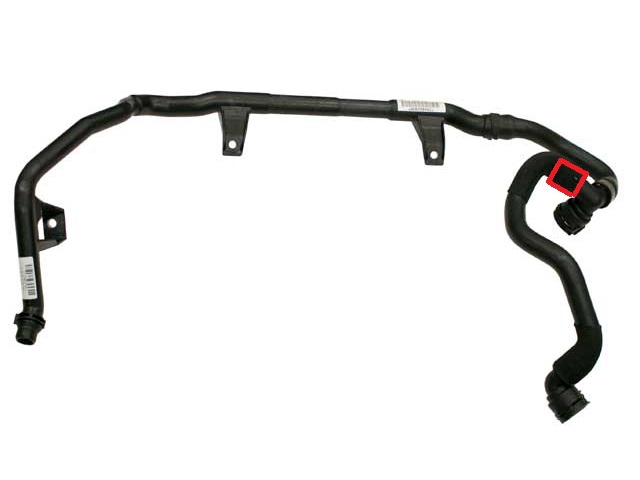 Here's a diagram of the cooling system. Red box is the factory expansion tank hose that is removed and capped off. The blue dash on the top right is where I installed the tee that goes to the radium expansion tank. 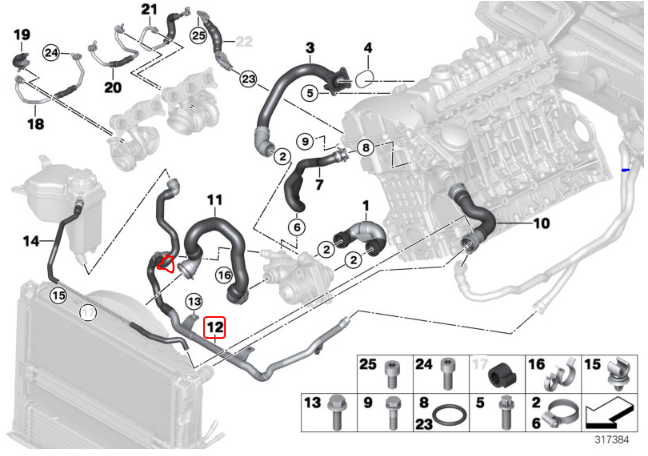 Hopefully that helps, it's ultimately the same hose so it just makes sense IMO to cap it off and splice in at the rubber portion of the heater return line as that allows you to avoid having to run a large 5/8" or 3/4" heater hose across the front of the engine where space is already tight around the fan.
Last edited: Jun 7, 2020
Reactions: seb.apprenti, Jeffman, e30sherm and 1 other person
B

I wanted to avoid needing a heat shield and to remove the plastic wire tray that bolts to the valve cover. To do that I removed the ignition coil and fuel injector wires from the plastic tray, separated them into bundles and wrapped the bundles in tesa tape. I then found that 6AN hose separators worked perfectly to organize the bundles but also provided a good spot run the wideband O2 sensor wires through as well. On the two trunks that go to the DME box I used a single 8AN hose separator to hold the branches parallel so they would both lay flat on the valve cover. Verified with my scope that there was no cross-talk from the injector and coil wires being so close so no harm done.

Here's an mid-build photo of this from a couple months back. 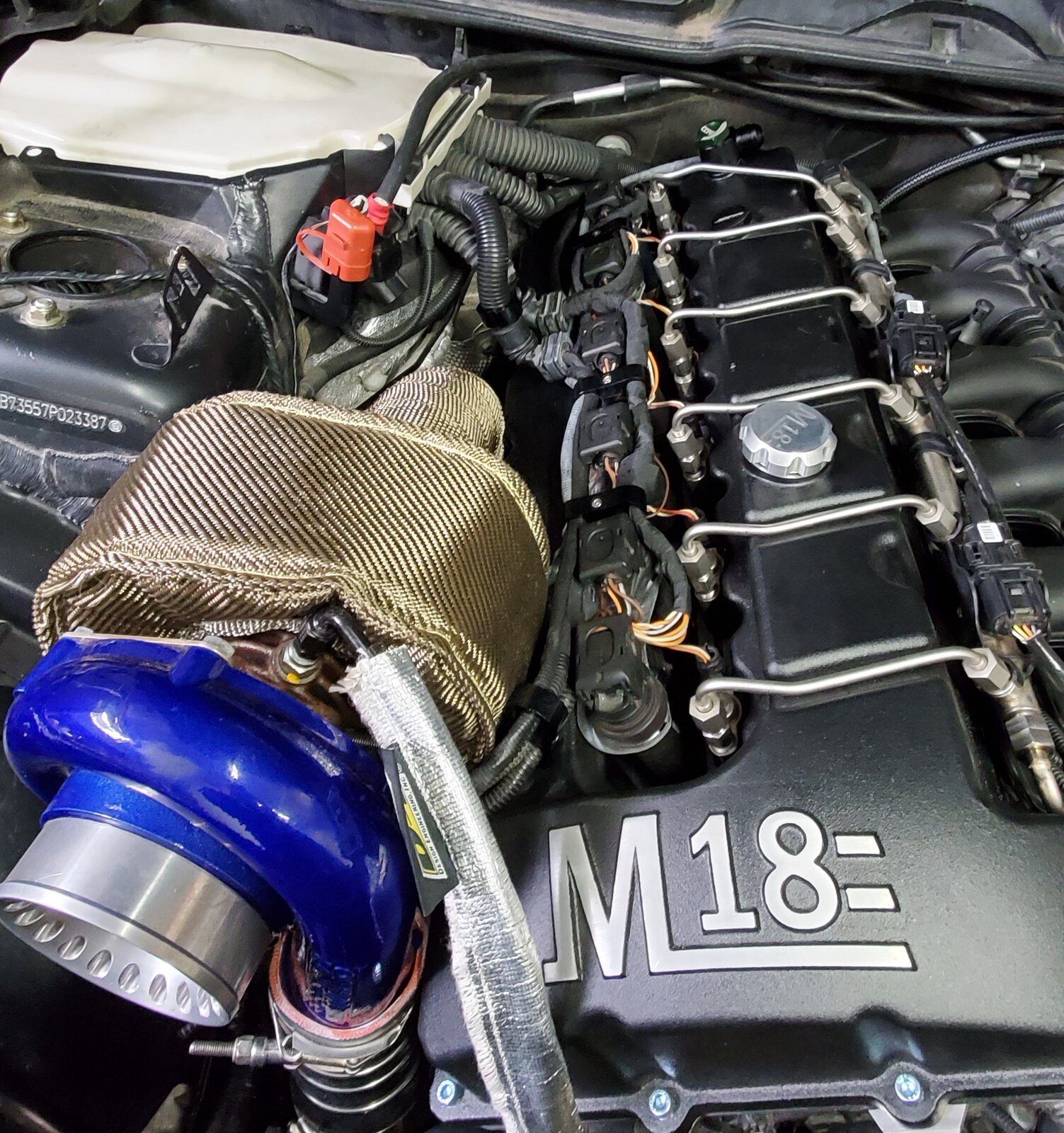 This thread is full of awesomeness.
Reactions: Eson_ and Jeffman
Show hidden low quality content
You must log in or register to reply here.

Losing fuel pressure and my sanity :(