So I'm diagnosing some problems with my engine, and figured I'd pick up a cheap compression and leakdown tester from Amazon. When I get this stuff in the mail, it comes in a nice handy box, but I found a piece of old machined burs stuck inside one of the fittings:

I would have been a very unhappy camper if that had fallen into my cylinder. Also, the fittings used to screw into the spark plug well are too wide. I think this is probably common for several testing kits out there, so I had to buy a Lisle 12mm adapter. While I was at it, I bought a remote starter trigger switch, this made the compression test and finding TDC for the leakdown a breeze.

I decided to take a crack at this with a cold engine. Due to various circumstances, it was just too much of a pain to keep the engine warm for all of this testing while considering I'm doing only a little at a time. The temps in my garage are akin to a convection oven when the 110* ambient temps outside are accounted for, so stints working on the car are fairly brief as I'm quickly drenched in sweat, despite a portable swamp cooler being present and waiting until the evening.

The first tests showed about 155 psi in pretty much all cylinders, with cylinder 3 having a one time spike up to 165.

This didn't make a lot of sense to me, my last compression reading done by a BMW technician was "175 across the board" according to him. But when the cold engine is put into the equation, I suppose it is possible but I didn't hold much confidence in these results. They all matched up so well, it just screamed there was a leak in my testing equipment at that pressure.

I moved onto my leakdown test, put 90 PSI in my tank and hooked up the tester. It turns out, that when you calibrate the testing gauge to 0 leakage before starting, it only accepts approximately 31-32 psi of pressure into the system. So instead of the leakdown test being performed at 90+ psi, they were done at a third of that.

As expected, results were eerily similar, less than 5% on all cylinders: 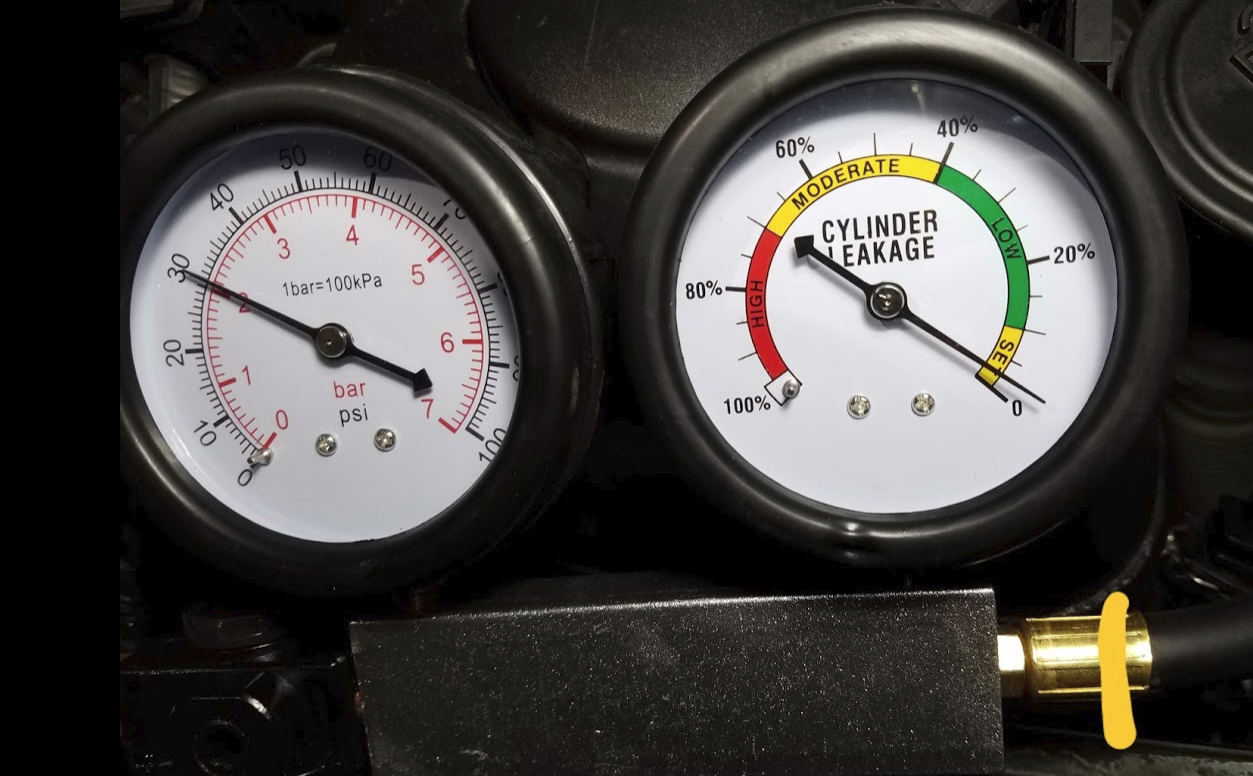 So while the leakdown results were good and the compression results were meh, I decided these mediocre/garbage results were likely due to mediocre/garbage testing tools. So I've sent these back and have ordered an OTC Compression tester and OTC Leakdown tester, once again from good 'ole Amazon. The price for the China special compression and leakdown tester totalled $56.40, while the OTC pair came to $117.37. So the OTC stuff was $60 more and also requires the Lisle 12mm fitting... But was it worth it?

Here was the first test on cylinder 1 with the OTC compression tester: 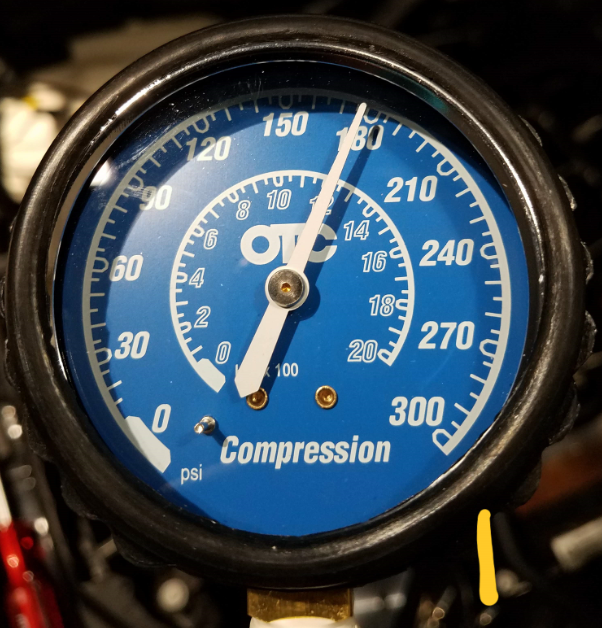 Comes in first go at 175-180 on a cold motor. It is late and did not have time to finish testing but I wanted to come in here and point out the obvious, don't use that cheap crap for anything larger than a Briggs and Stratton lawn mower engine, and that is being generous. I'll update the thread later with my full compression and leakdown results for posterity.

Here are the other five cylinder compression results:

So you can see that Cylinder 6 is a bit low once again. About 157 PSI vs 170 for the rest. Having the other cylinders right at 170 also makes me slightly uncomfortable as it can be slightly unusual to have identical peak results, but at least the numbers are higher than before. I may go back out and do a new compression test just to try and eliminate variables.

So for good measure I went out and did another compression test:

So this looks much better, at least the integrity of the results. There is an 11 PSI swing between Cylinder 1 and 6 however.
Last edited: Jul 28, 2018
Reactions: derekgates, NoGuru and dyezak

Who would have thought it would be off by that much...
Thanks for sharing.

Super post. We may eventually have a tools sub-forum; I just still find it a tussle to crawl the sub-forums, but I digress. Lots to talk about on the tool front. Did you ever consider that buying a compression tester by someone named "Shankly" was sketch?

The general trend on Chinese equipment is upward on quality, but this kind of thing can and does still happen. Consider looking for Taiwanese products, tool-wise. They are generally near-and-at Japan quality. This can be a smidge tricky to sort out. Here's an example on a compression tester from Taiwan, which is $40. The OTC unit you bought is made in China. Glad it works great, and OTC may have the QC to get the right tools sold. Just a note to self - Taiwanese tools tend to be good.

Curious to see what you find with the rest. Good luck!

I've followed up with a leakdown using the OTC tester:

These were much more realistic looking figures and they look good, even on a cold engine.
Reactions: The Convert

I want the tools sub-forum! And maybe not just tools but things we have bought and can indorse.

But.... I also want it to include a place for us to tell people what NOT to buy.

What to buy!
What NOT to buy!
Reactions: NoGuru and doublespaces

What not to buy will easily become Octagon lol. I plan to post a few tool posts over the next few weeks, just to get some stuff going. I think @doublespaces standard operating procedure is, if enough content goes in a direction and it warrants, sub-forum is a consideration...

Jim you should write up your oscilloscope, once you have some familiarity with it.

I was just thinking...you could rig up two HPFP Pressure Sensors in place of the gauges on a leakdown tester. Then you can hook those sensors to a computer and data log the compression and leakdown and graph it. Godly expensive for extremely little benefit but would be "neat"...
Reactions: doublespaces

dyezak said:
I was just thinking...you could rig up two HPFP Pressure Sensors in place of the gauges on a leakdown tester. Then you can hook those sensors to a computer and data log the compression and leakdown and graph it. Godly expensive for extremely little benefit but would be "neat"...
Click to expand...

Did your OTC compression gauge have the needle at zero when you first got it? Mine was at 25 psi which makes me question the results.

veer90 said:
Did your OTC compression gauge have the needle at zero when you first got it? Mine was at 25 psi which makes me question the results.
Click to expand...

Send it back, amazon is good with returns

Sorry... I meant, mine did not look like that. mine appears normally with it resting at 0.
V

doublespaces said:
Sorry... I meant, mine did not look like that. mine appears normally with it resting at 0.
Click to expand...

This is the 3rd item with a pressure gauge I've gotten from amazon with the needle offset at zero pressure. -__-

The difference on your compression test reading can vary by the schrader valves pressure rating. The lower reading from the "China" tester doesn't mean it wasn't accurate.
Reactions: veer90

Shane303 said:
The difference on your compression test reading can vary by the schrader valves pressure rating. The lower reading from the "China" tester doesn't mean it wasn't accurate.
Click to expand...

Debatable I suppose? The schrader valve is more or less part of the compression tester as a whole, so I personally wouldn't say the results are accurate considering the 20 psi contrast we're seeing between these units. The design is also better as I saw someone point out before, the schrader valve in the OTC is at the base of the hose, where it screws into the spark plug hole. The cheap tester had the valve all the way up at the gauge. This impacts the reading as well since the hose flexes under pressure and also has more potential joints to leak from.

Shane303 said:
The difference on your compression test reading can vary by the schrader valves pressure rating. The lower reading from the "China" tester doesn't mean it wasn't accurate.
Click to expand...

Can you explain this? I've not heard this explanation before.

I'm aware that Schrader valves have maximum pressure values. For engine compression testing, we are are in the 100's of PSI not 1,000's so I would imagine pressure ratings to be completely moot. But what I understand from your statement is that the pressure rating can actually effect a reading, when comparing two different compression testers with two different Schrader valve ratings.

I would expect all compression testers to use a Schrader valve rated for the job. We are talking a couple hundred PSI. The mechanic had recently gotten 175psi, so getting a 20psi drop with the Chinese tester would have seem to indicate to me that there was a tool issue. The metal shavings would have been the other indicator.

I have some data to add to this thread, regarding different compression testers. I've used 3 - Autozone special Innova tester, the OTC tester that @doublespaces used, and the FIT tester @fmorelli linked.

The auto zone Innova tester is trash. While it's somewhat good at showing consistency between cylinders, the actual values are highly suspect.

You can imagine the anchor in my stomach feeling as I thought my built motor was going bad, so I started looking at different testers to answer this question. Next up is the OTC tester. While the results are good, there was a 25 psi offset (see my post above) which means subtract 25 from these results.

I returned it and got the FIT tools tester, which showed up with a solid-looking, heavy-feeling gauge with the needle at zero like it should be (sorry didn't take pictures)

Let me know what you guys think of these results.
Reactions: Torgus and fmorelli
Show hidden low quality content
You must log in or register to reply here.