You are using an out of date browser. It may not display this or other websites correctly.
You should upgrade or use an alternative browser.
R

Yes, with basic changes for FD, shift maps, RPM limits, etc. Nothing that alters any logics or anything since I have M3 shifter. I may try spirited again and 6 for transition 1 today though.

So my current setup is stock hardware with M3GTS flash. I dont feel sport mode come on in sequential mode but it could just be that the way @Olza has altered my bin has changed the logic OR that I just havnt noticed it. Either way exciting times.

The implication though is that this also happens on the M3 no ?

Also should we be looking at how the n55 M2 behaves as that would be closer to what our setups would be like?

All you need to know about the BMW M2

Here is all you need to know about the new BMW M2: design, chassis, engine and transmission 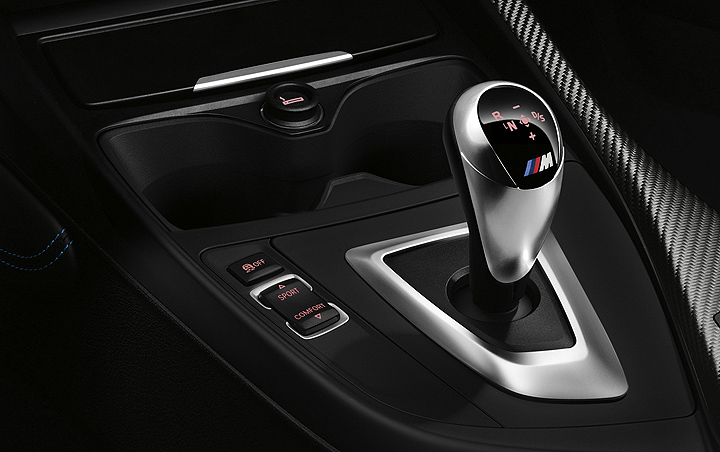 The new BMW M2 can be ordered as an option with the latest generation of the seven-speed M Double Clutch Transmissions (M DCT with Drivelogic). This system, which effectively combines two gearboxes, each with its own clutch, is specially designed to work with the customary engine dynamics of M cars and the engine’s high torque and output. Depending on the driving mode activated, it enables either extremely fast gear changes with no interruption in the flow of power or ultra-smooth shifts. The extra gear of the M DCT transmission over the six-speed manual gearbox allows very small increases in rpm between gear changes when accelerating and reduces fuel consumption thanks to its longer gear ratios.
Moving between the transmission’s manual modes alters the shift dynamics, but it is the driver who determines the timing of a gear change. The system detects which gear the driver will choose next on the basis of the engine’s revs, the accelerator position, the level of acceleration and the driving mode, and engages it before the driver has actually moved the shift paddle. As a result, the clutches now only need to open or close for the gear-change process to be completed. The change of gear is therefore executed in fractions of a second and enhances the dynamic driving experience in a very palpable way.

So im interested also, because in my conversion only default keys used, logic is switched via them to x35 gws + sport. Sport signal is sending for sure as usual in x35.
@aus335iguy , does your sport button lights up when you press it?

Olza said:
So im interested also, because in my conversion only default keys used, logic is switched via them to x35 gws + sport. Sport signal is sending for sure as usual in x35.
@aus335iguy , does your sport button lights up when you press it?
Click to expand...

The sport button works normal on my car and I assume by “press it” you mean when i put the stock shifter into sequential mode?
Not to my recollection, Ill have to look and listen out for it when i go for a drive today. Maybe the stock GWS doesnt send it unless sport is pressed?

aus335iguy said:
Not to my recollection, Ill have to look and listen out for it when i go for a drive today. Maybe the stock GWS doesnt send it unless sport is pressed?
Click to expand...

It makes sense. The m3 shifter takes drivelogic input from the button rather than sport off on.
R

It probably has more to do with the shifters/sport button (or lack thereof) that each use and the message values they generate. Non-M, Z4 and M3 all handle them all differently. Something in the M3 bin with M3 GWS is sending a message in manual mode that MSD81 does recognize to activate RNG_L, just not sure what/where yet.

DS = non-M shifter left, let's use that to avoid more of everything is referred to as "sport" lol
Reactions: aus335iguy

M3 GWS doesn't have DS position or a sport button, either of which may be why yours doesn't do it. Different shifter, different positions, different values, different logics.
Reactions: aus335iguy

Just FYI On the old M5 shifter...
there’s a d/s selection by tipping to the right.

aus335iguy said:
Just FYI On the old M5 shifter...
there’s a d/s selection by tipping to the right.
Click to expand...

Just checked and M3 has it too?

M3 is same, but it's a momentary switch for D or S selection, not a fixed position DS like non-M. Everything except N and R occurs with the M3 GWS at center position.

I think biggest diff is probably the sport button though. Log those params I sent without sport button on and shifter in different positions, they will tell you if any cause trans to make a request for RNG_L.

Edit: I should says occurs from the center position.

Having issues with android at the moment but my CAN device is incoming
Reactions: RSL

The M3 GWS activates “sport” in our DME when in manual mode which is from the centre position and by pushing lever to select a gear +/- ?

Or when in centre position and tipped to the right d/s and s mode selected?

Or both manual and d/s?
R

I've only tested tipped right between D and M, but up/down will put it into manual (sequential) if in D, so I would expect it to have the same result. I'll test next time I'm out to confirm. 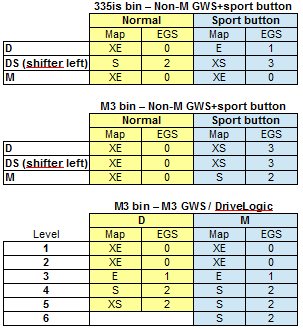 If I’m reading it correctly (I’ve not had a lot of luck lately) that’s exactly what I think happens .The gearbox is staying in the same shift mode until sport is pressed
R

aus335iguy said:
If I’m reading it correctly (I’ve not had a lot of luck lately) that’s exactly what I think happens .The gearbox is staying in the same shift mode until sport is pressed
Click to expand...

Yes. You can play around with the modes and modify shift maps, but it will more or less be A or B determined by sport button any time it's shifting itself. D/DS doesn't make a diff. It MAY at some point, but I didn't mess with it enough before I put the M3 GWS.

Sure not makes diff, because useless imho. You either drive like granma or fast-n-furious.
About m3 tcu + non m gws: you fall into XS because when Sport button pressed you got P5 or P6.
Now with my conversion we can get only two levels which should cover relaxed and sporty/spirited drive.
But if it is important, we can think about add to game M/S position of non-m gws for m3 bin.

But @RSL said you also got sport mode in DME when in Sequential position of m3 gws and m3 bin. This is interesting and should be investigated.
Reactions: aus335iguy
Show hidden low quality content
You must log in or register to reply here.