History of the 8 Series

For those who aren't very familiar with the 8 Series (me): 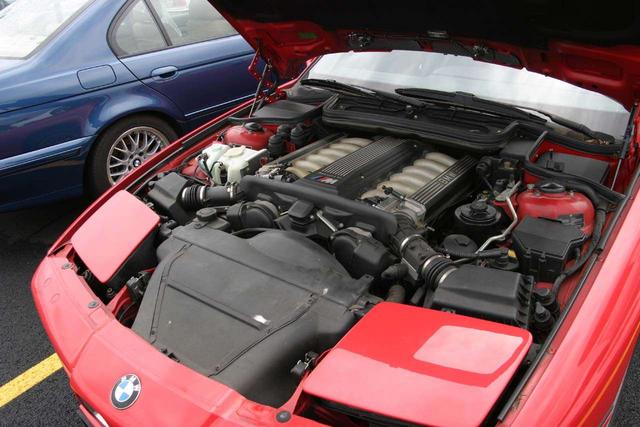 Originally envisioned as a Ferrari competitor equipped with a special 550 bhp (410 kW; 558 PS) version of the S70 engine, essentially a bored out version of the M70 with 4-valve per cylinder heads. A common misconception is that this engine powered the McLaren F1. The S70/2 used in the McLaren F1 was not based directly on the prototype 4-valve V12 used in the M8, and was a completely new design.[13]
The project was eventually scrapped because BMW decided that there was no market for an M8 primarily because of the recession of the 1990s. The only prototype ever produced (one that was reportedly not even safe for normal road usage) was locked away by BMW in the company's Giftschrank (poison storage).[14] BMW and the M Division had strongly denied that the car was even a possibility since the initial stages of its development. A world exclusive feature in the February 2010 issue of BMW Car Magazine, however, revealed that the M8 prototype still exists in its entirety.[15]The car was unveiled to journalists for the first time on July 2, 2010 at the BMW Museum in Munich.[16] The only public showing of the car happened on August 17, 2012 during 'The Legends of the Autobahn' car show held in Carmel, California.[17] The car was specially shipped from Germany for the appearance.
While the M8 was never produced, it is interesting to note that the 850CSi was also tuned by BMW's M division. Aside from sporting an M-tuned engine (as identified by the S prefix instead of the M prefix that a non-M tuned engine would bear), the car's VIN identifies the car as being built by BMW Motorsport (a WBS prefix) instead of BMW AG (WBA prefix). Per BMW's own protocol, the 850CSi as marketed was essentially a de-tuned version of the putative M8.
Click to expand...

What it actually looked like(prototype)

I won't post the VIN and this was a 1997 model, one of seven made that year. But it starts with WBS. One can say what one wants about the name (and marketing makes up the names). The "S" designates made by BMW Motorsport ... that's what matters. BTW I shot that photo on the east coast ...

It says they were labeled as M8 but it was nothing more than a fixed up 850. So technically I suppose you can say it was an M car, like the M235i.

Well the M235i has a WBA prefix. Not the same thing. Point is WBS is prefix for M division. What people want to call it as a name really doesn't matter. The S70 based 8 series cars were declared produced by the M division.

Never regarded as an M car. even tho it did have the S engine code. Still nothing like they originally planned to produce is it. 6.1L 550bhp with carbon manifold and runners. Could you even call the 850csi a watered down version of that! I personally don’t think so.

You do make some interesting points about chassis number.

BTW no one seems to have connected 1997 model year 850CSi photographed on US soil ... there is a conundrum there if you can figure it out. And it is not the obvious conundrum.

So not the OBD II compliance?
You must log in or register to reply here.