You are using an out of date browser. It may not display this or other websites correctly.
You should upgrade or use an alternative browser.
K

Yes, as long as you change things like the headlights, hood and grills, belly pan, fender liners, brake ducts, oil ducts, fog lights and maybe more. In other words, you would need to do something called an LCI conversion. 2007-2010 is Pre-LCI. 2011+ is LCI. Also, moving this to the 3 series area since this isn't about the N54.
K

Are the e92s really that different? I did an lci bumper and hood on my 07 e90 and all I needed was the hood, bumper, and grilles. Everything else fit the same.

langsbr said:
Are the e92s really that different? I did an lci bumper and hood on my 07 e90 and all I needed was the hood, bumper, and grilles. Everything else fit the same.
Click to expand...

This pretty much sums it up: 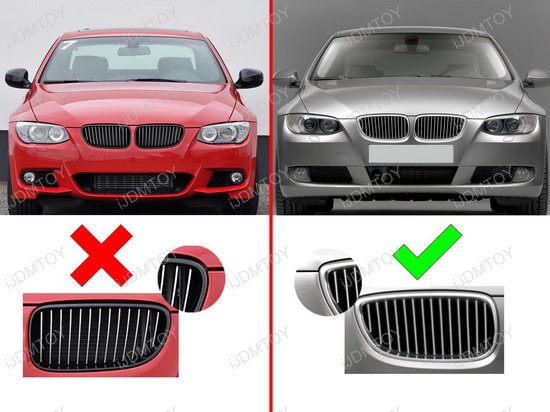 The normal stuff but look at the fog lights, not the same and because the duct openings are not shaped the same or even in the same location, those are separate parts. The brake ducts on the PreLC are rigfht next to the oilcooler/ppk radiator ducts. On M Sport and LCI, they are inward right next to the FMIC. And even though the Pre-LCI M Sport brake ducts and LCI brake ducts look the same, they have different part numbers as they are designed a bit different IIRC. Oh yeah, the radiator carrier is different too, but you can use a multi-tool and cut off the plastic that interferes with the brake ducts going inward instead of straight out.

I'm assuming he's going from Standard to M Sport as well, but even if not there are different part numbers for all the ducts between Sport and non-sport between the LCI and Pre-LCI models. This is why it was so hard for me to find the driver side PPKv2 secondary radiator duct for a pre-lci M Sport. There weren't very many ppkv2 kits sold, and m sport on top of that(all 335is are LCI so can't use those parts either). And yes, the finder liners are absolutely different even on the Pre-LCI alone, they have these wings that go inward toward the belly pan. And this is before you change over to the LCI stuff.

My build thread has some details on this matter, and since LCI and Pre-LCI M Sport are very similar but not the same, I'm just gonna say it all needs changed out, unfortunately.

Ecs Tuning has pre-LCI MSport front bumper kits with all fasteners included for $503 or thereabouts. I am going to be upgrading my 2009 pre-LCI front bumper to MSport as well as M3 style side skirts. Sometime in February. Expensive part is the paint job.
Show hidden low quality content
You must log in or register to reply here.