I recently picked up an all stock 2011 335ix, 6AT, E92, fairly well optioned, black on beige. I knew ahead of time it had a blown motor, the owner told me it chucked a rod down through the oil pan at 84,000 miles for no apparent reason. I didn't really check the car out ahead of time, besides a one-over.

Towed it home with @V8bait, it's low on oil, low on coolant, low on washer fluid, and low battery. Together we pulled off the front clip to diagnose what exactly the failure was so I can get a rebuild plan. 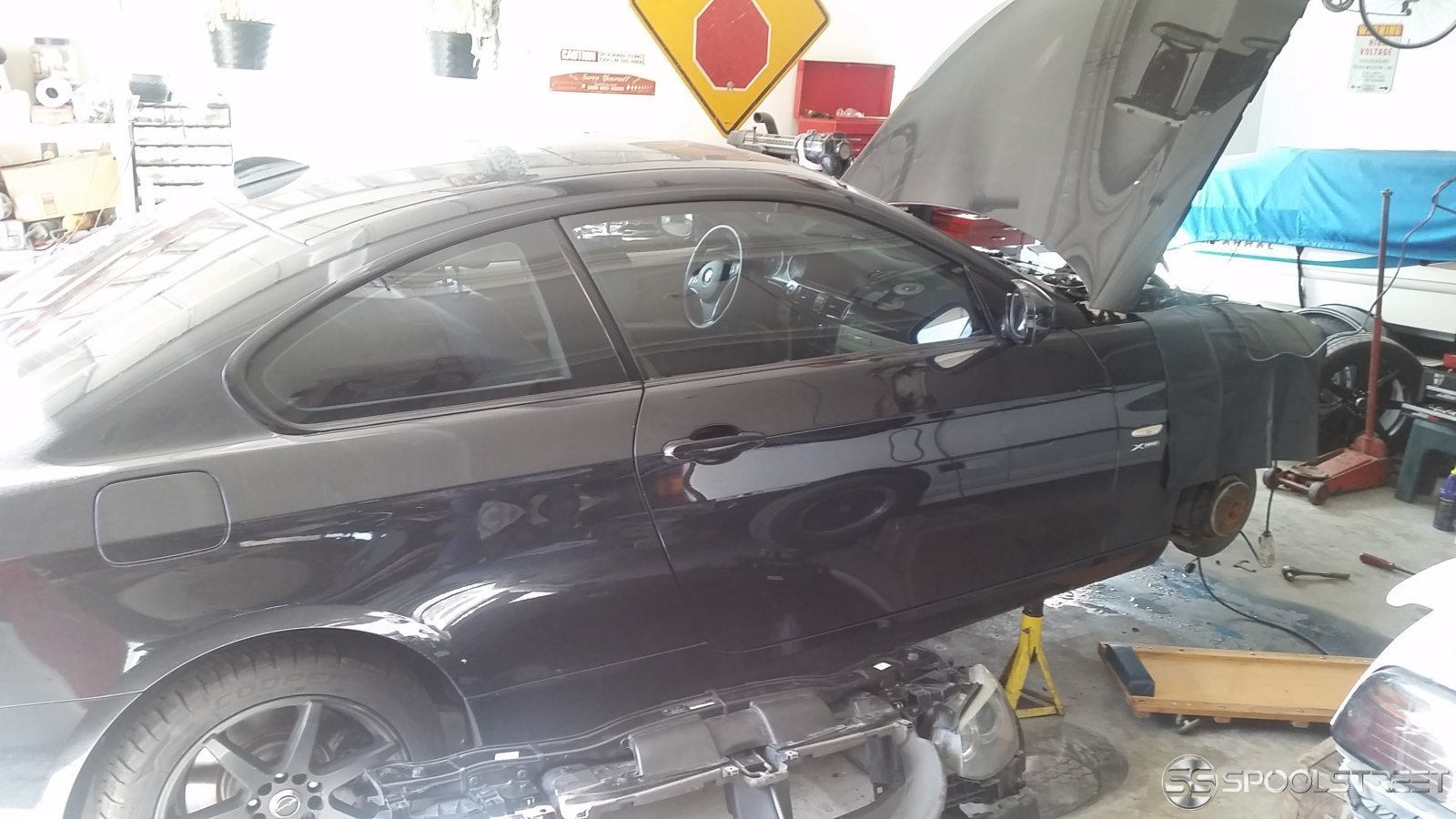 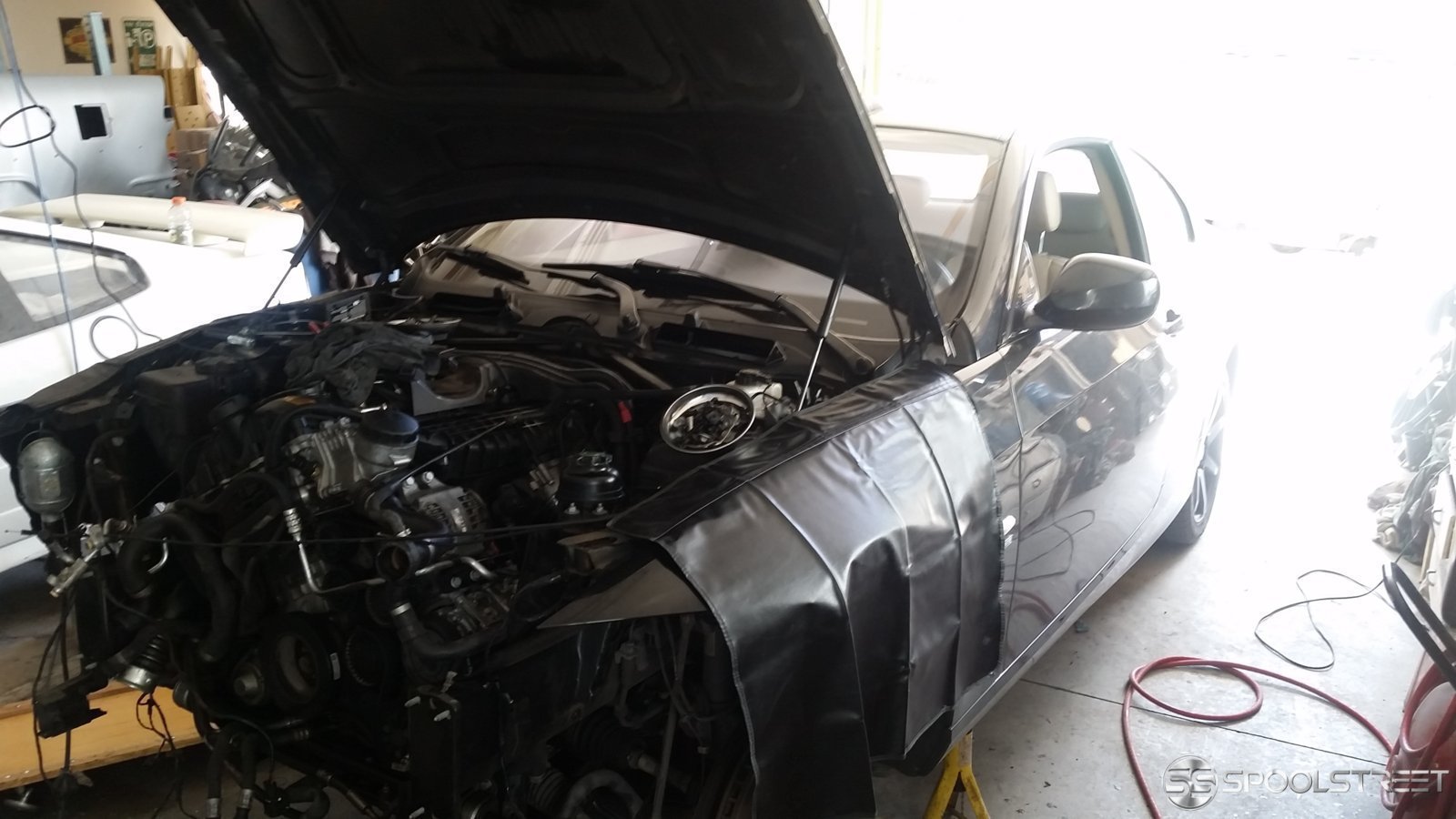 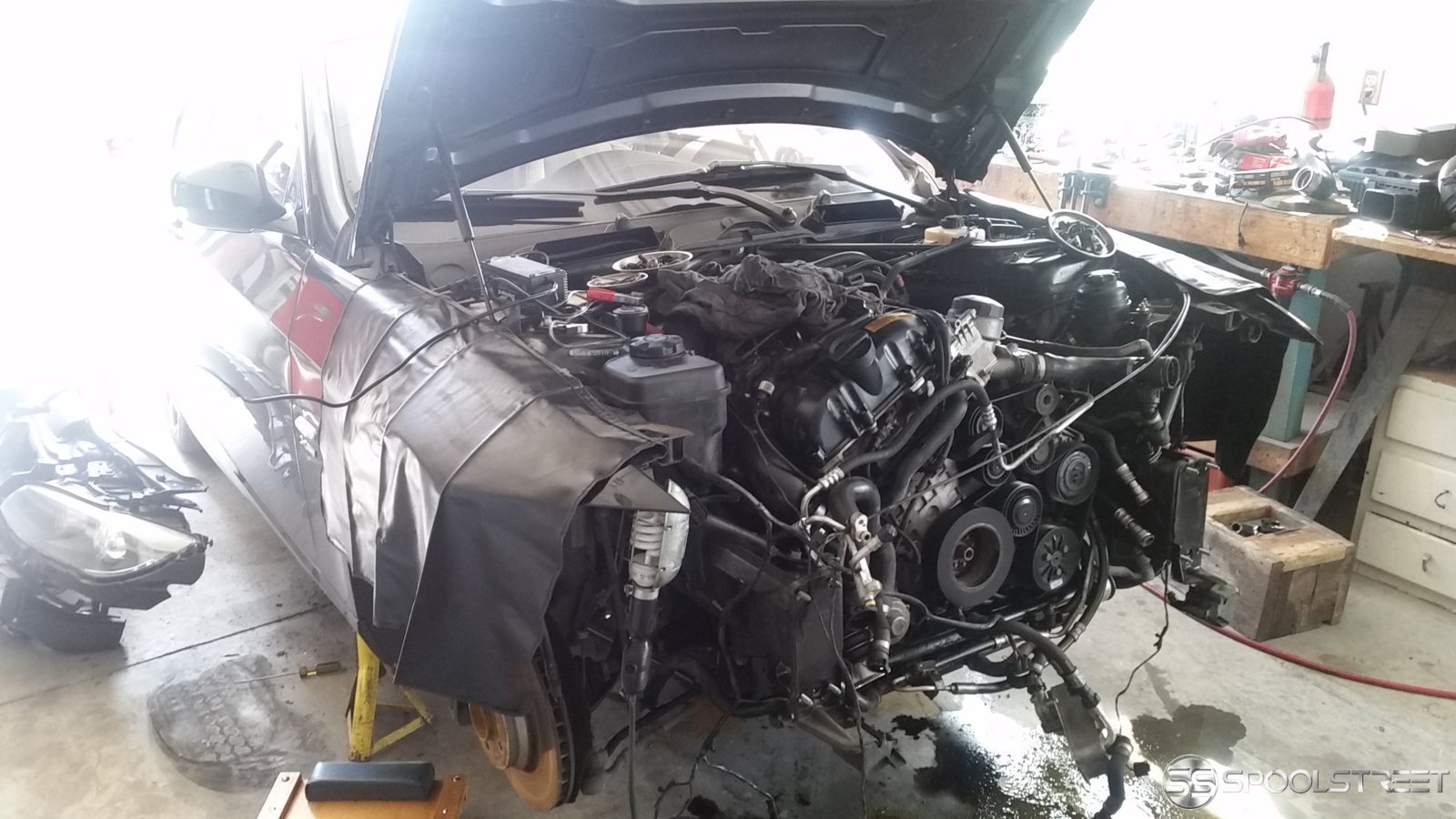 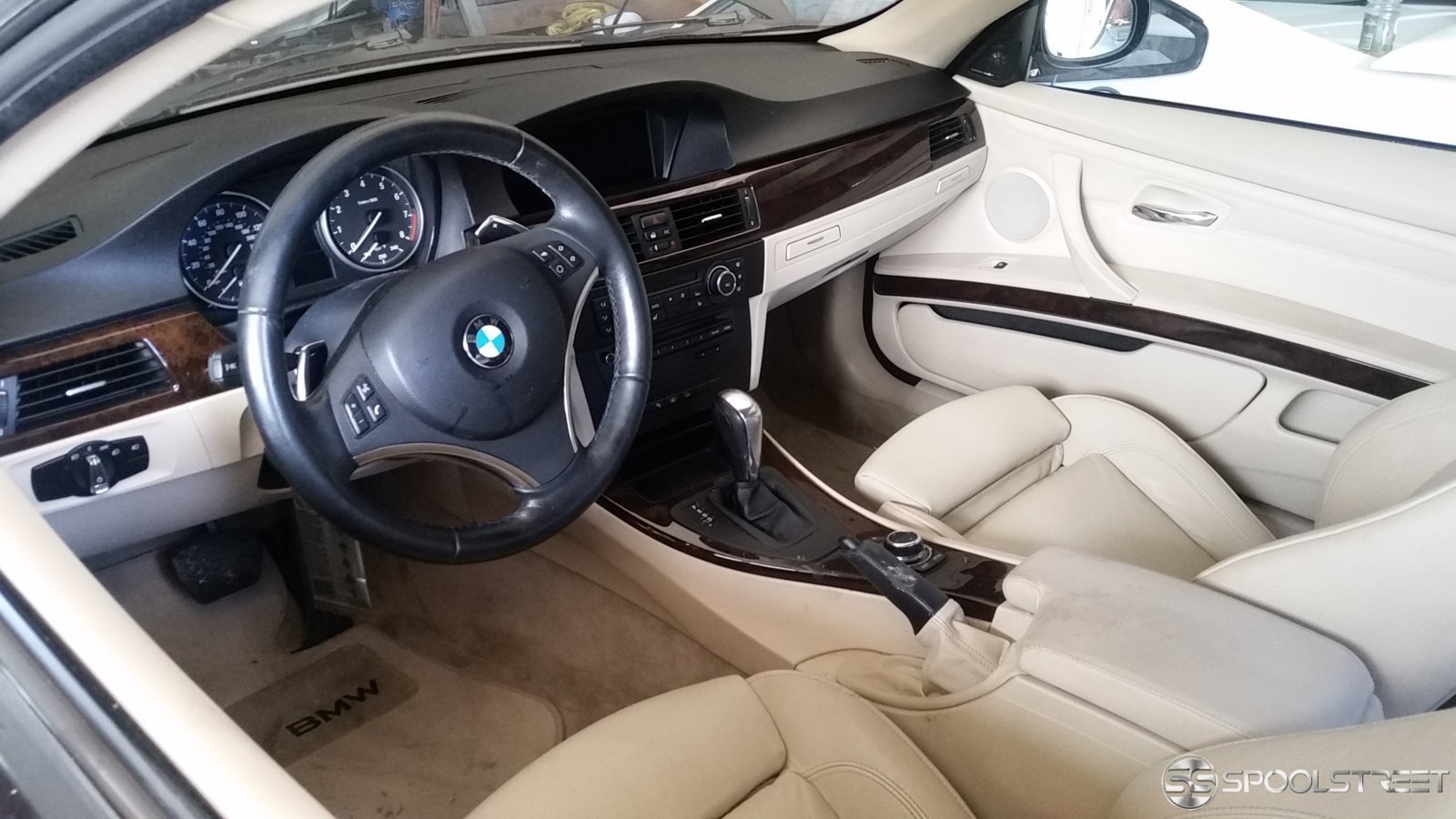 And now we get to see what happens when you pull the under-trays: 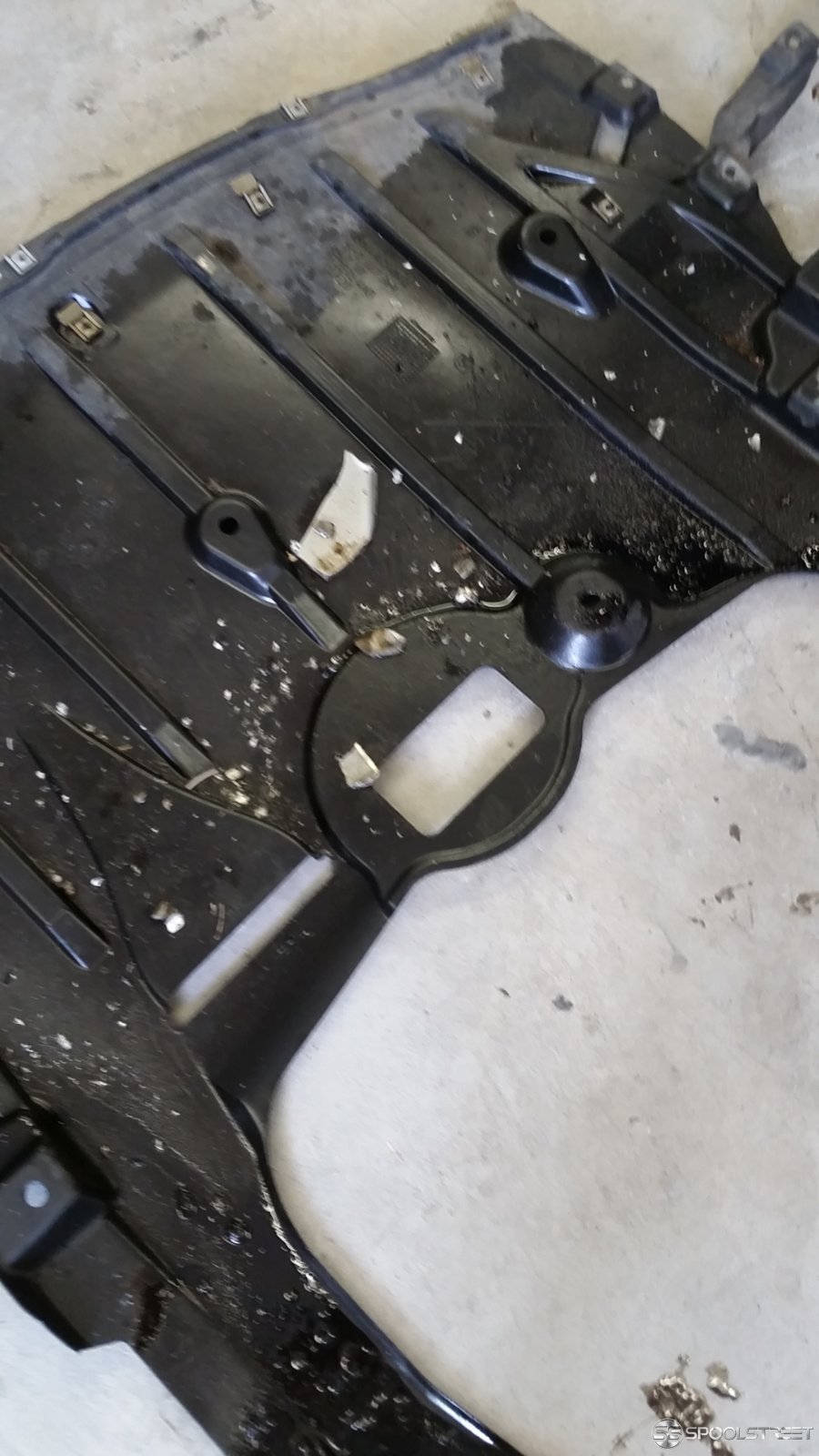 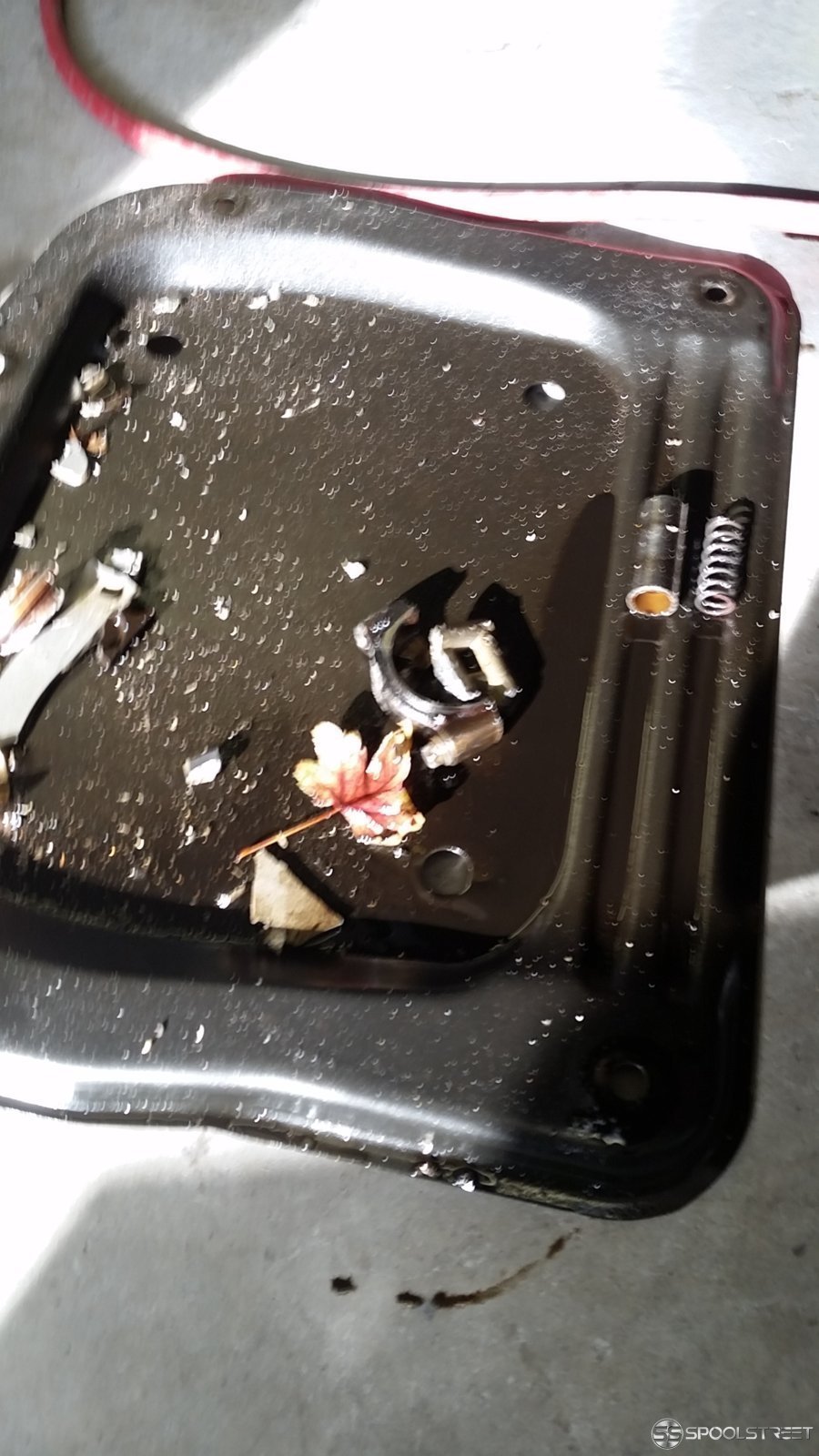 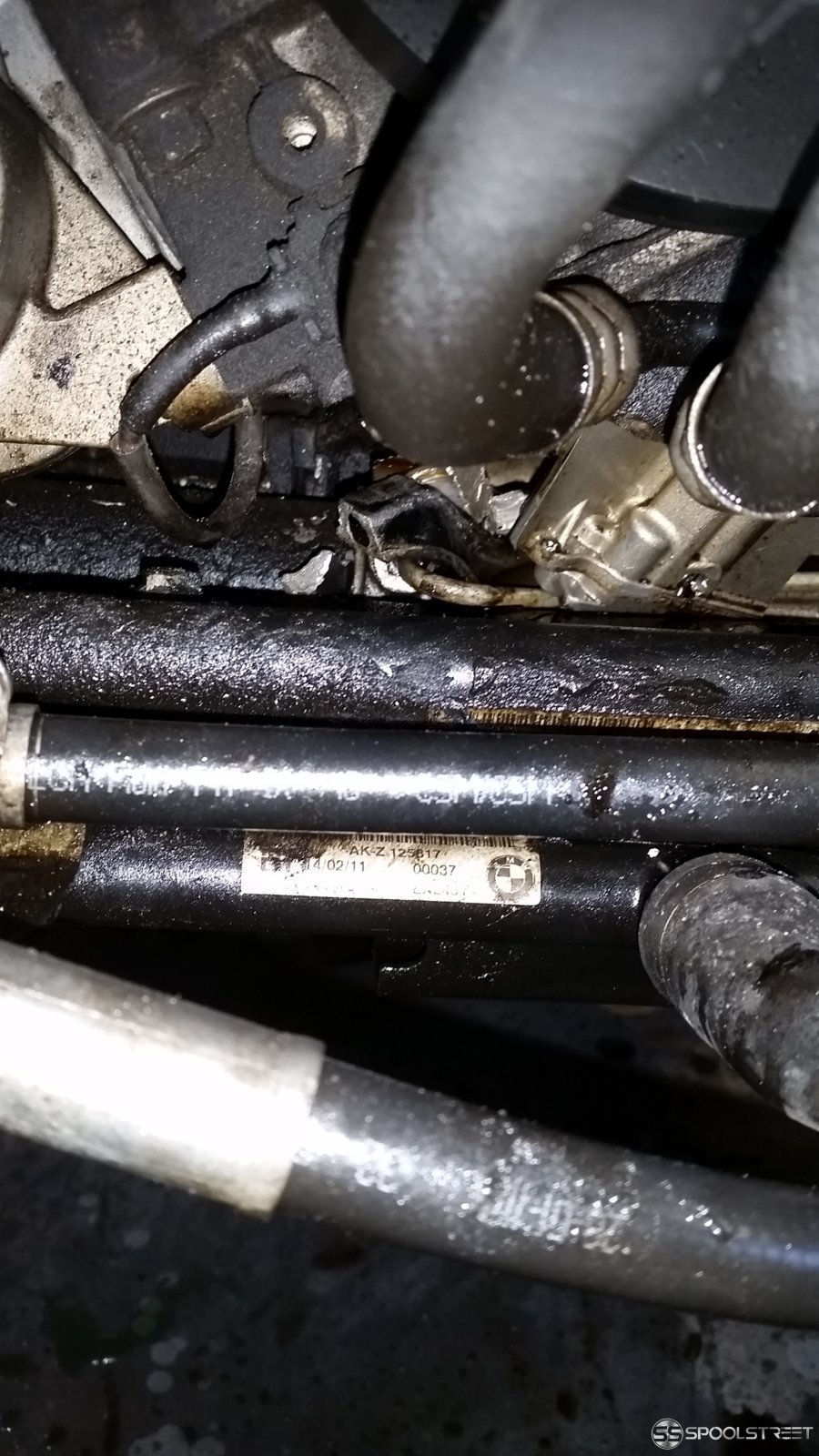 So far it appears that the #1 rod broke, causing the piston to be blended (Will it blend?), and causing the rod to lightsaber it's way around the block. There is a crack/wide opening down the side of the block by #1. I'm deeply disappointed, I was hoping I could just replace the rod and throw a new pan on it, but now it looks like I'll need an entirely new motor.

So, I'm on the prowl for an N55.
Reactions: doublespaces

Mad props @doublespaces , the media feature works perfectly and is convenient. Without it I wouldn't have posted this thread at all.

Got almost everything disconnected between the car and engine today. I don't know why people freak out over the bell housing bolts, I didn't have much trouble. Just needed a good wobbly! The motor is locked, so there's no way to unbolt the torque converter. On to plan B there.

Here you can see where the vacuum pump bolts to the engine. Mine is a bit loose. 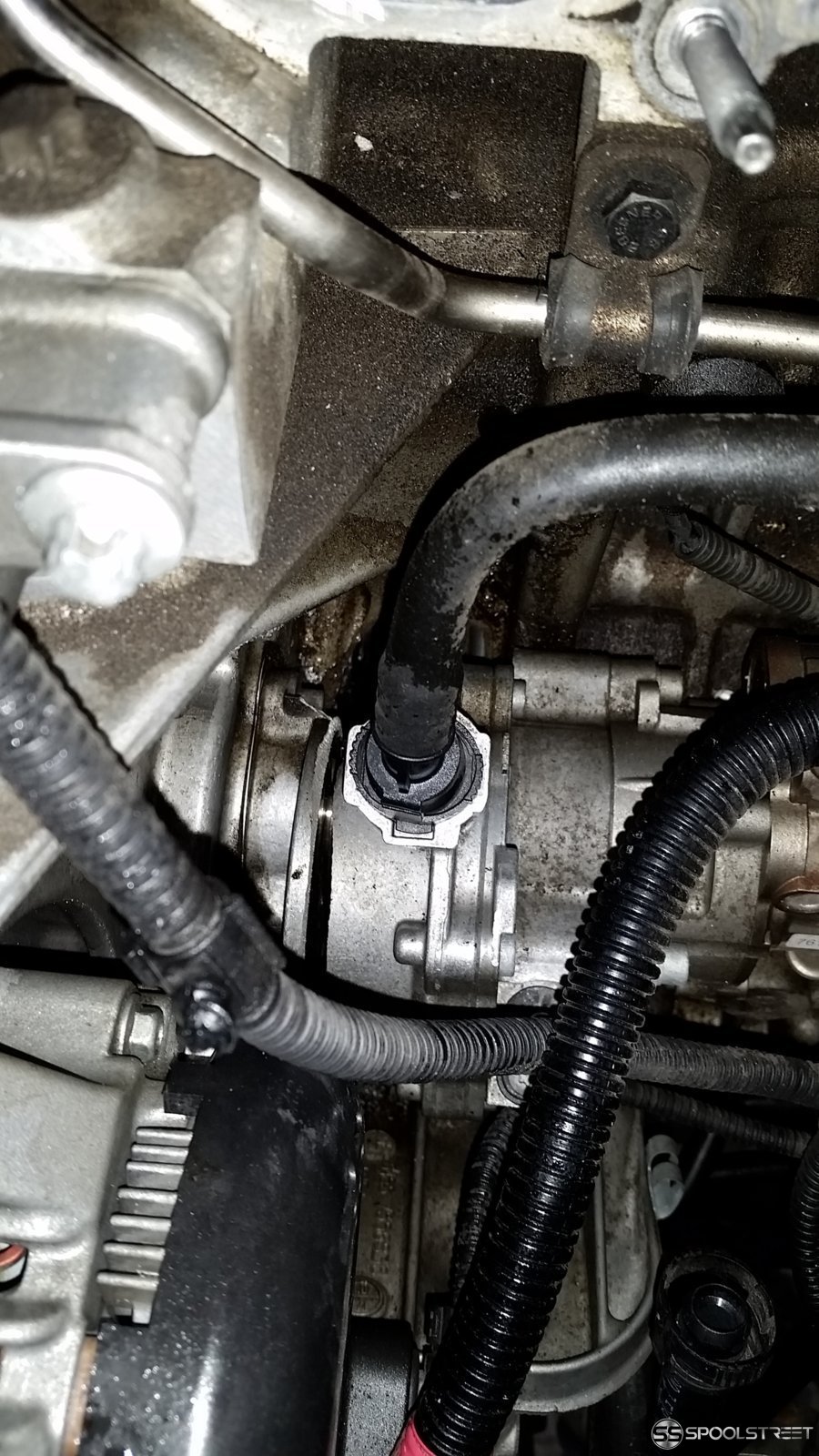 Anybody know where these motherfuckers go? Found them on the ground after pulling the front clip out. 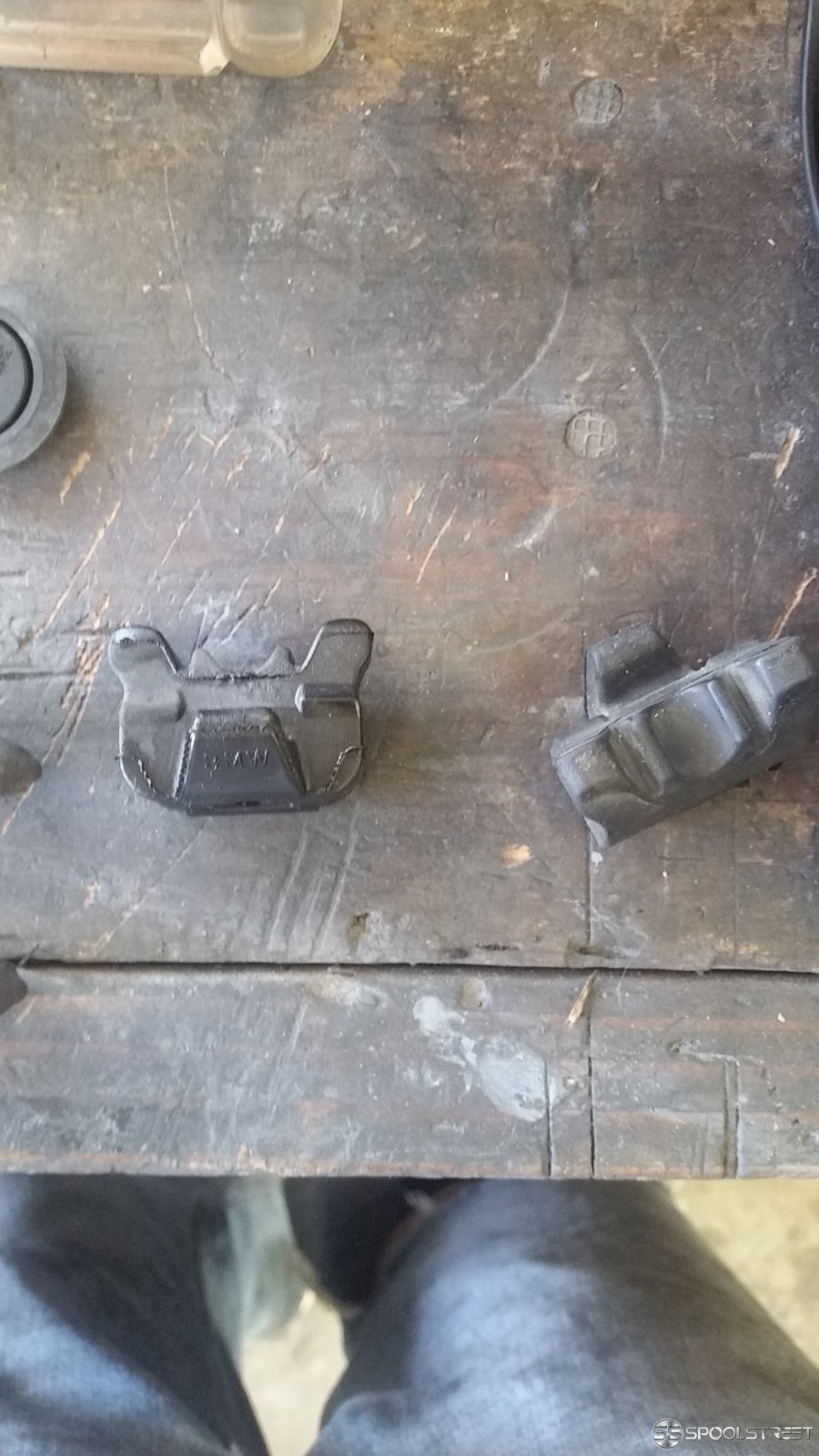 Aaron said:
Mad props @doublespaces , the media feature works perfectly and is convenient. Without it I wouldn't have posted this thread at all.
Click to expand...

I'm glad it works for you! There are multiple ways to upload photos here. The media feature(Including the camera icon on the toolbar) is one method that is fairly easy for people willing to make an album. You may also upload photos directly like attachments, and then clicking the insert option next to each photo attachment to place it in the body. And lastly, you can simply drag and drop photos directly into the text edit box and it will automatically upload the photos as well.


Aaron said:
Anybody know where these motherfuckers go? Found them on the ground after pulling the front clip out.
Click to expand...

Those rubber things are the cushions for your radiator. On the frame rail there are two L type brackets with four holes that also double as mounting points for your oil/ppk cooler. On these metal brackets a plastic shelf clips on and inside of that is where those rubber things go, if I'm recalling this correctly.

Is there any particular reason for wanting an N55?

Awesome I'll make sure they get put back there.

The motor is an N55 originally, so keeping it easy. If the N54 swap isn't horrible I'd consider it, but cheap/easy is the name of the game here as this is an investment.
Reactions: doublespaces

I gotcha, so you probably don't plan on throwing in some stronger rods then eh?

No not at all, either a junkyard motor or a cheap rebuilt one. This car is not my favorite for a performance car, it's got the autotragic trans, AWD, and the N55. So it'll get a stock rebuild, I'll clean it up and fix the issues it has (Comfort access not accessing), and I'll sell it for a profit.

I blew a hole in the outlets on my 335is, so I'll post an update of that later. Also picked up an LSD for it.

I don't think I'd get another N54. I love the car's potential but as you already know, there are lots of other ways to make power. I honestly think my next car will be an electric daily, and if I get another after that, some sort of large displacement NA engine that sounds real nice and let it live its life without boost and a nice exhaust.

Interesting update today. Got the axles pulled, and everything else pulled apart from the engine, so it's ready to come out. The damage caused the motor to seize, even with my breaker bar it wouldn't budge. Now pulling a seized motor by itself (Leaving trans in the car) on an automatic poses an interesting conundrum. That torque converter. There are a few ways to solve this. I chose introducing the sledge hammer to the oil pan. Pretty sure I found this in the factory service manual. 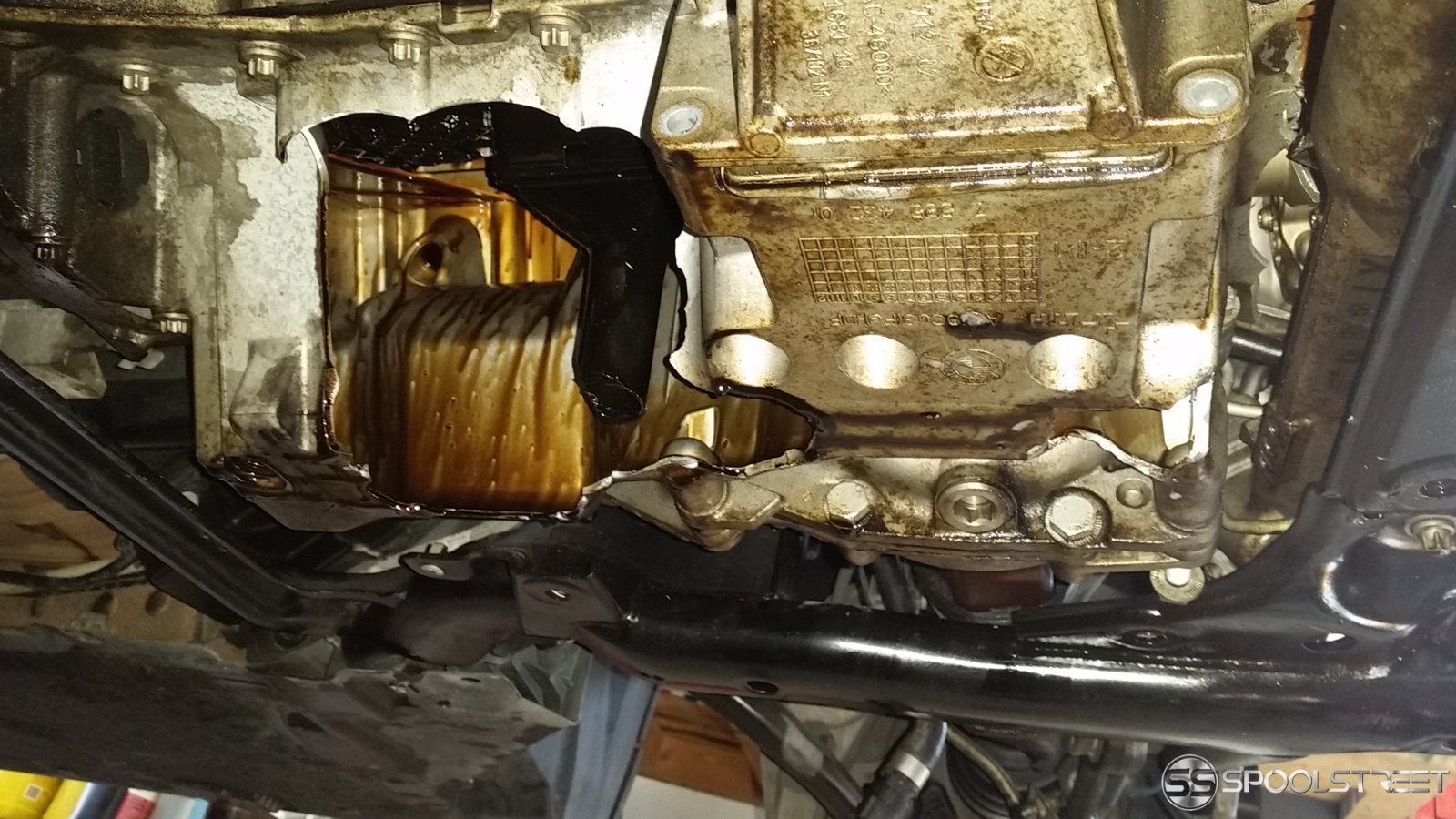 After doing this I started picking out pieces. Next picture is the view to the front of the engine, down by the oil pan, looking at the engine. Engine is jacked up 4-5" at this point to aid in piece disposal. 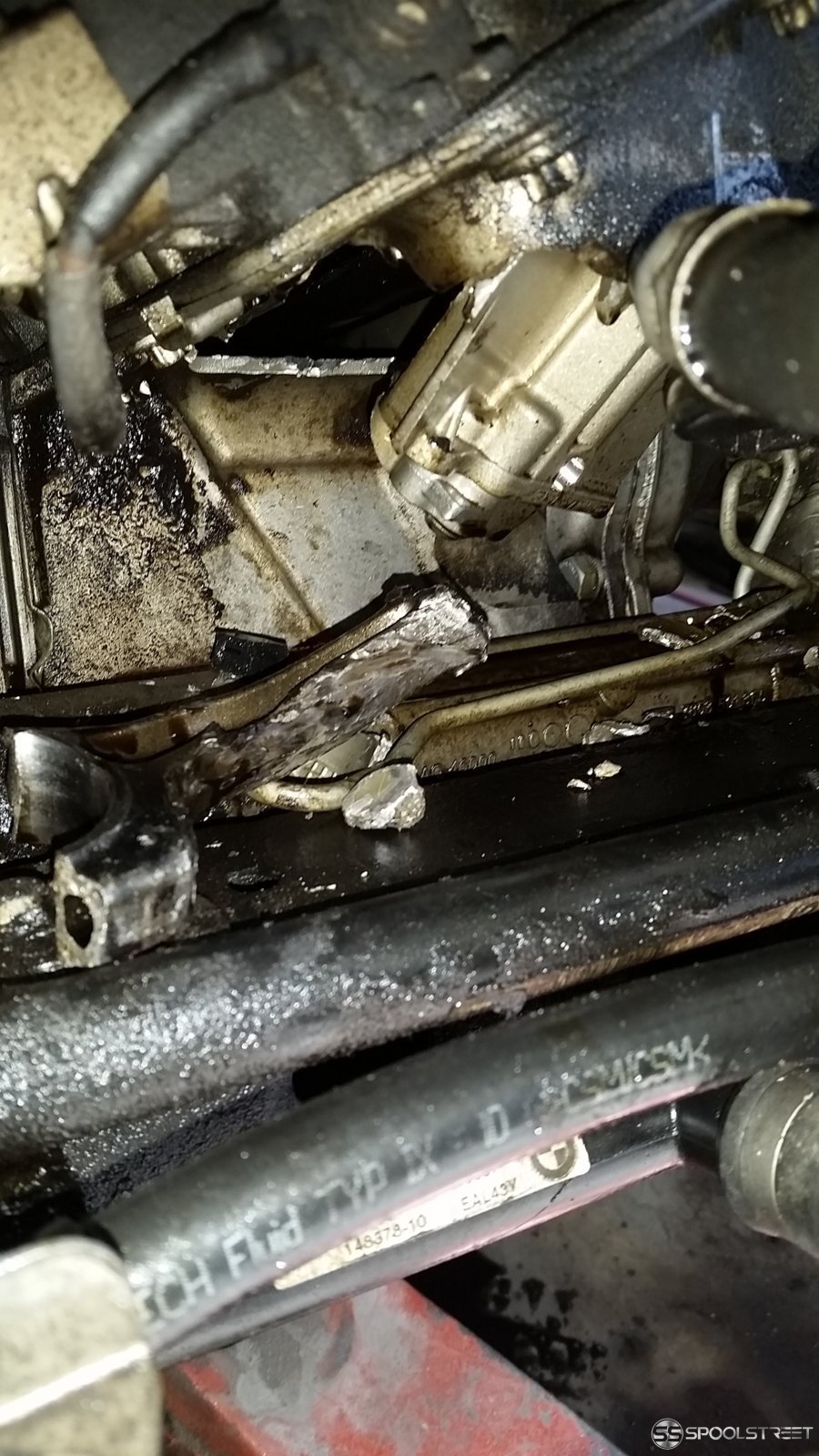 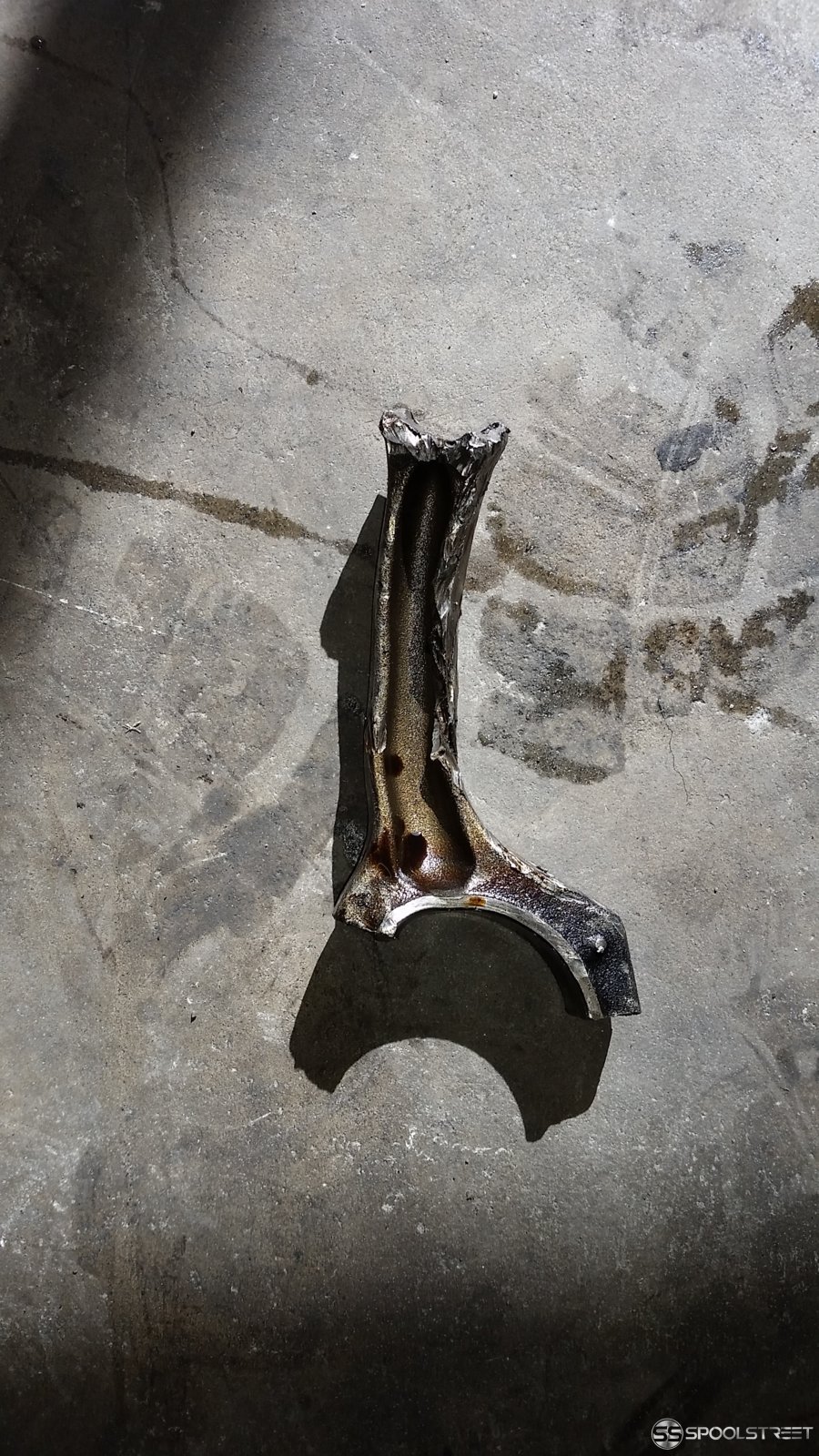 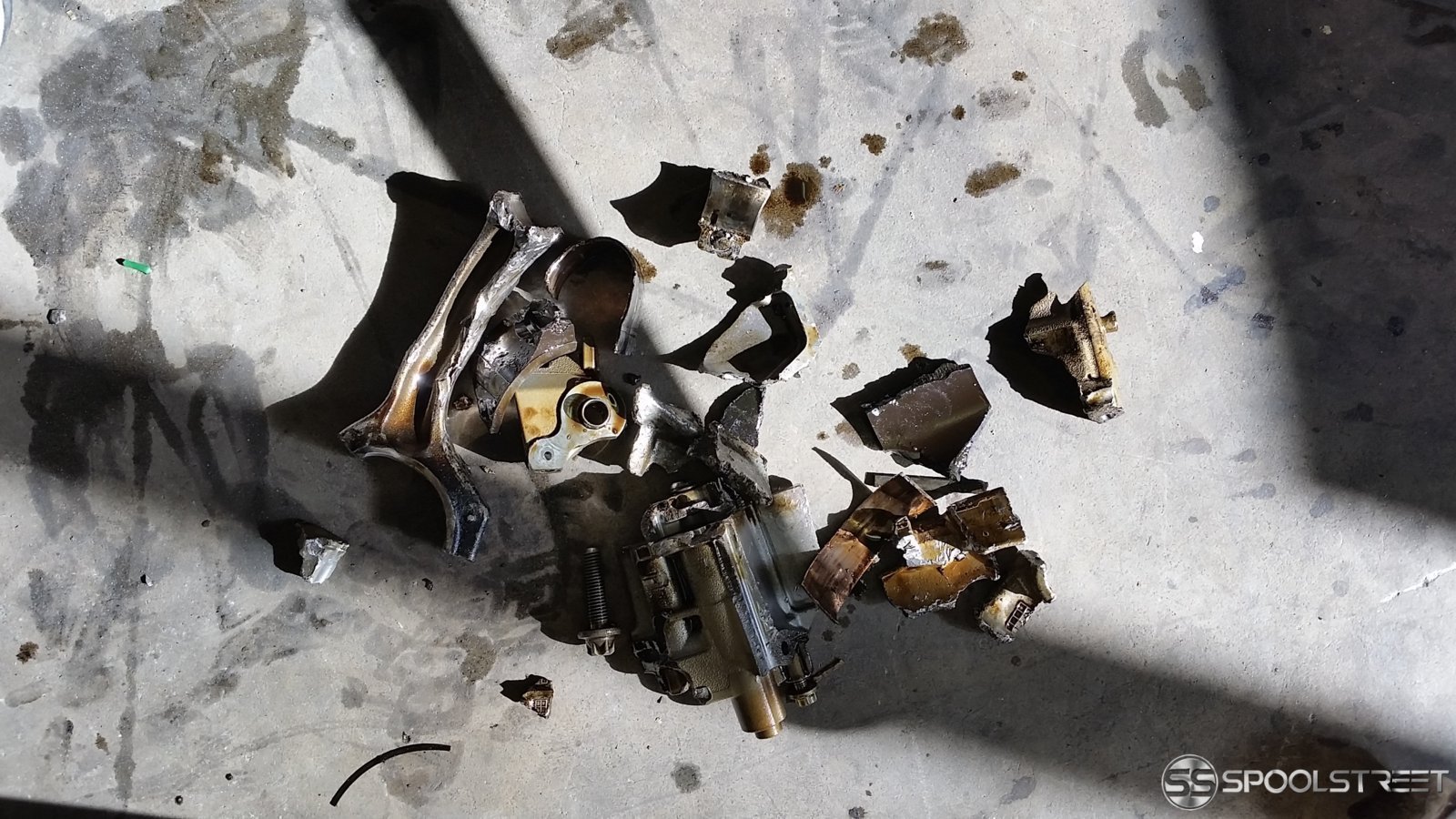 Next up I removed the HPFP and vac pump. Here is where they were, looking down: 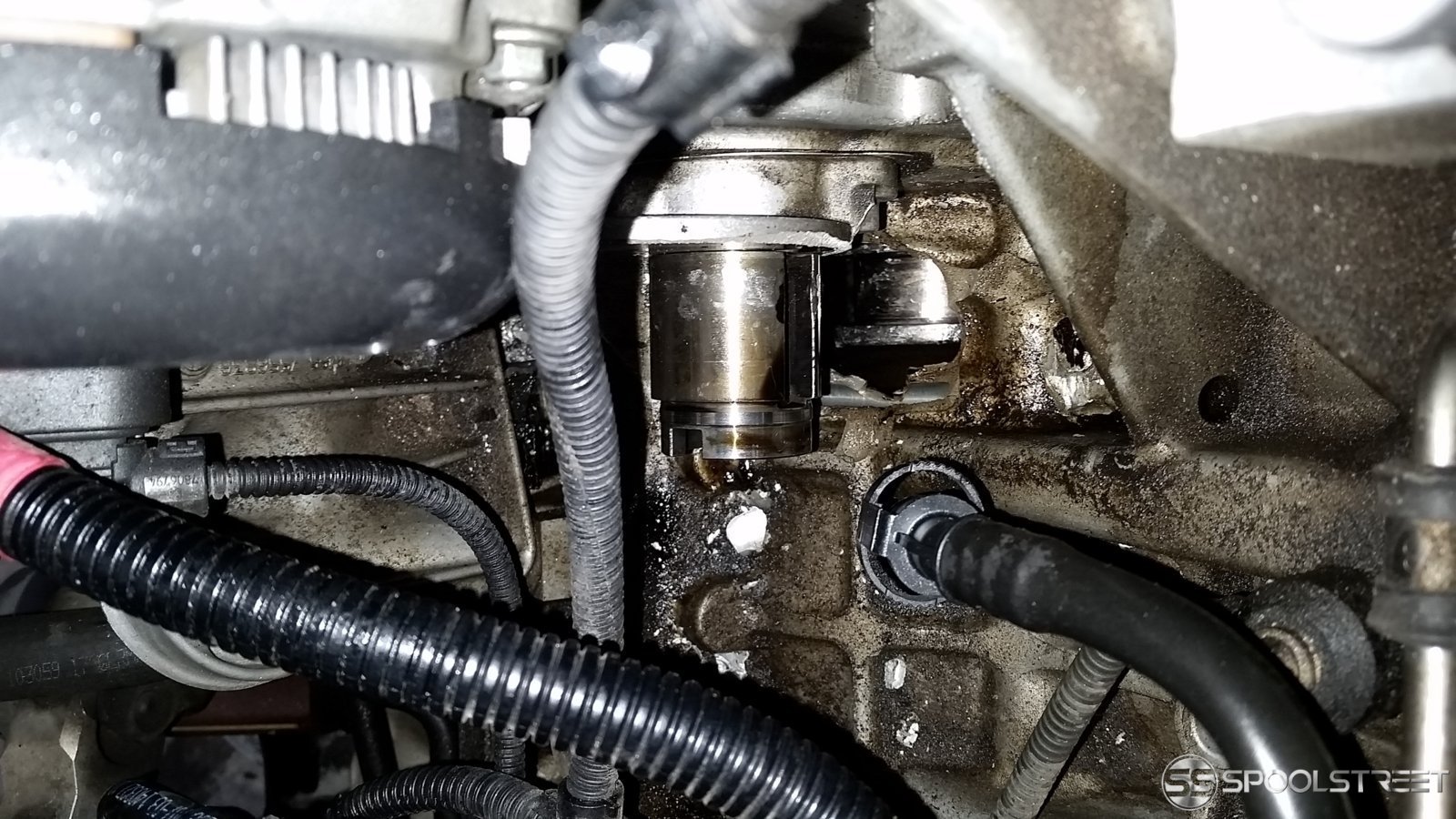 And the vac pump itself. Luckily, the HPFP survived, and I have an extra vac pump laying around. 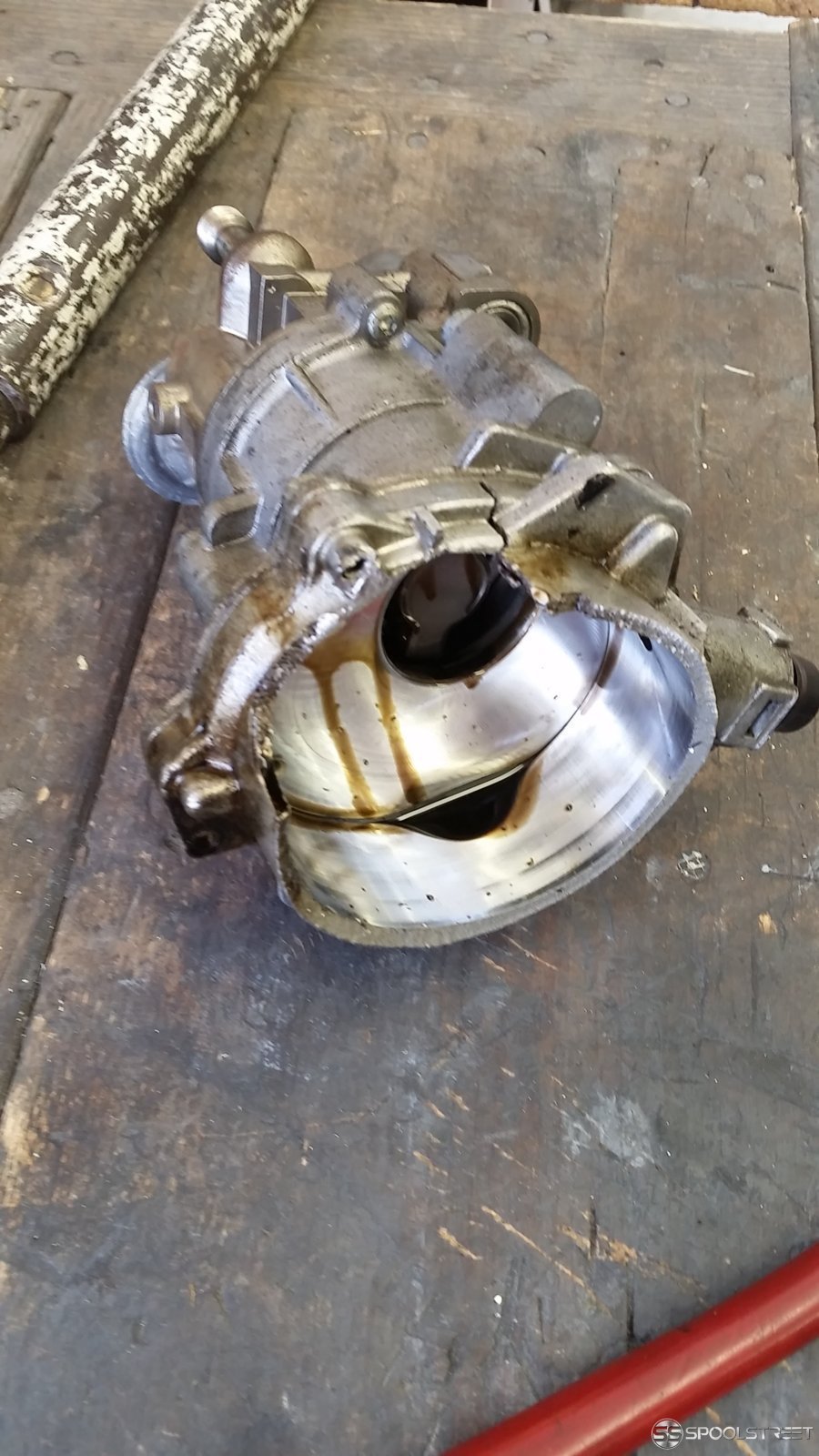 After removing all the pieces I could by reaching into the motor, I pulled the coils/plugs and found something interesting. Cylinder 1's plug indicated it was burning pretty rich, much more-so than the others which looked fairly normal. Who knows, maybe the injector failed open, flooding the cylinder, causing essentially a hydrolock. And once the rod bent as far as it could bend (The normal consequence of a hydrolock), it broke, lightsabered, and owned Mr N55. Just a theory, but I'm pretty sure I'll be replacing some injectors just in case.


I then decided to try and rotate the seized motor since I wanted to unbolt the torque converter. Breaker bar, 20 some mm impact socket, and a 4ft steel cheater bar that fits my 2ft breaker bar perfectly. 6ft of leverage and I was able to rotate the motor! I wouldn't say it spun freely, I had to use the cheater bar the whole time and there were noises that engines shouldn't make, but it did rotate, allowing me to remove all 6 converter bolts. One nice thing about a mostly seized motor, I could remove the converter bolts alone, as that wasn't near enough torque to rotate this thing.

Probably going to leave the motor in the car for a week or so until I can find an engine. Gassan in Oklahoma sells rebuilt motors with a warranty, but he starts at $4000, adds $350 for an AWD oil pan, $1000 core charge (Which I can't recoup), and I'll still need injectors. He's fresh out of motors, but should have more next week so I'll probably drive out there then if nothing else pans out. There's a couple cars closeby on copart, but I'm not sure when they'll actually start the auction, they're holding for DMV paperwork currently.

4500 bucks you could buy another salvage car I'd think.

You think right. I've been bidding on several crashed cars, and finally won one. Just got back from a trip to Kentucky to get it. 2011 335i convertible, automatic, RWD, silver on black, 55,000 miles front end collision. I'll get pics later, but I pulled the crashed bits off last night. Both frame rails are bent, so it's not worth repairing. Bumper, headlights, hood, fenders, radiator, condenser, intercooler, oil cooler, and the fan are all damaged beyond repair. But the motor looks good!

So it sounds like part out time, you got enough there to break even?

It will be part out time eventually, but not yet. I do not want to get into that yet. So for the readers, if you email me asking for a part, the price is $5,000. I'm not even fucking kidding. I'll advertise when it's ready.

It's absolutely worth it, I bought the car for $4600, and the motor alone is worth that much.

Oh, and I take back my first comment. The intercooler is for sale. $200 shipped. 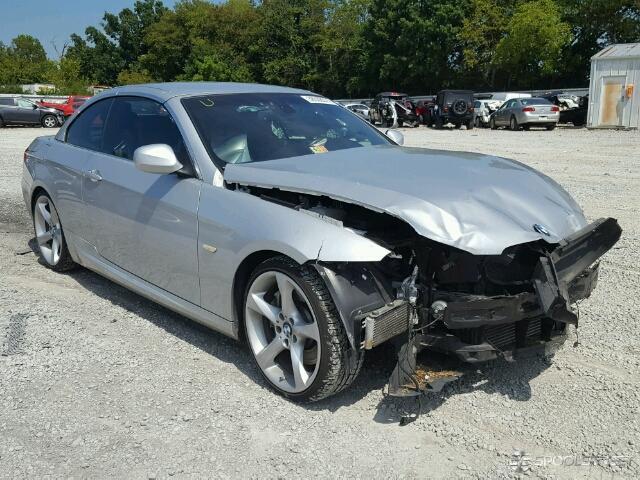 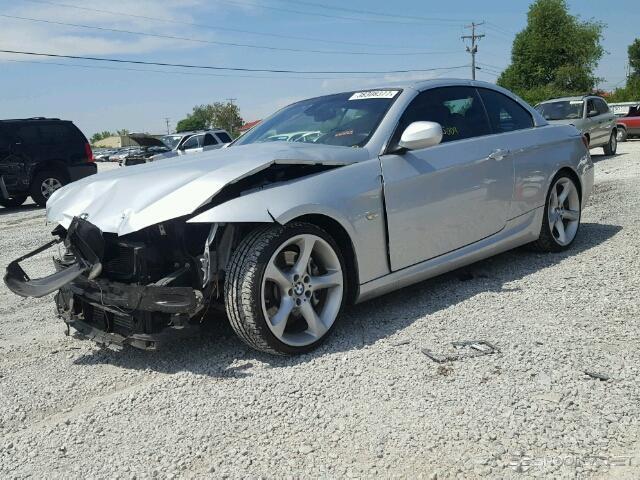 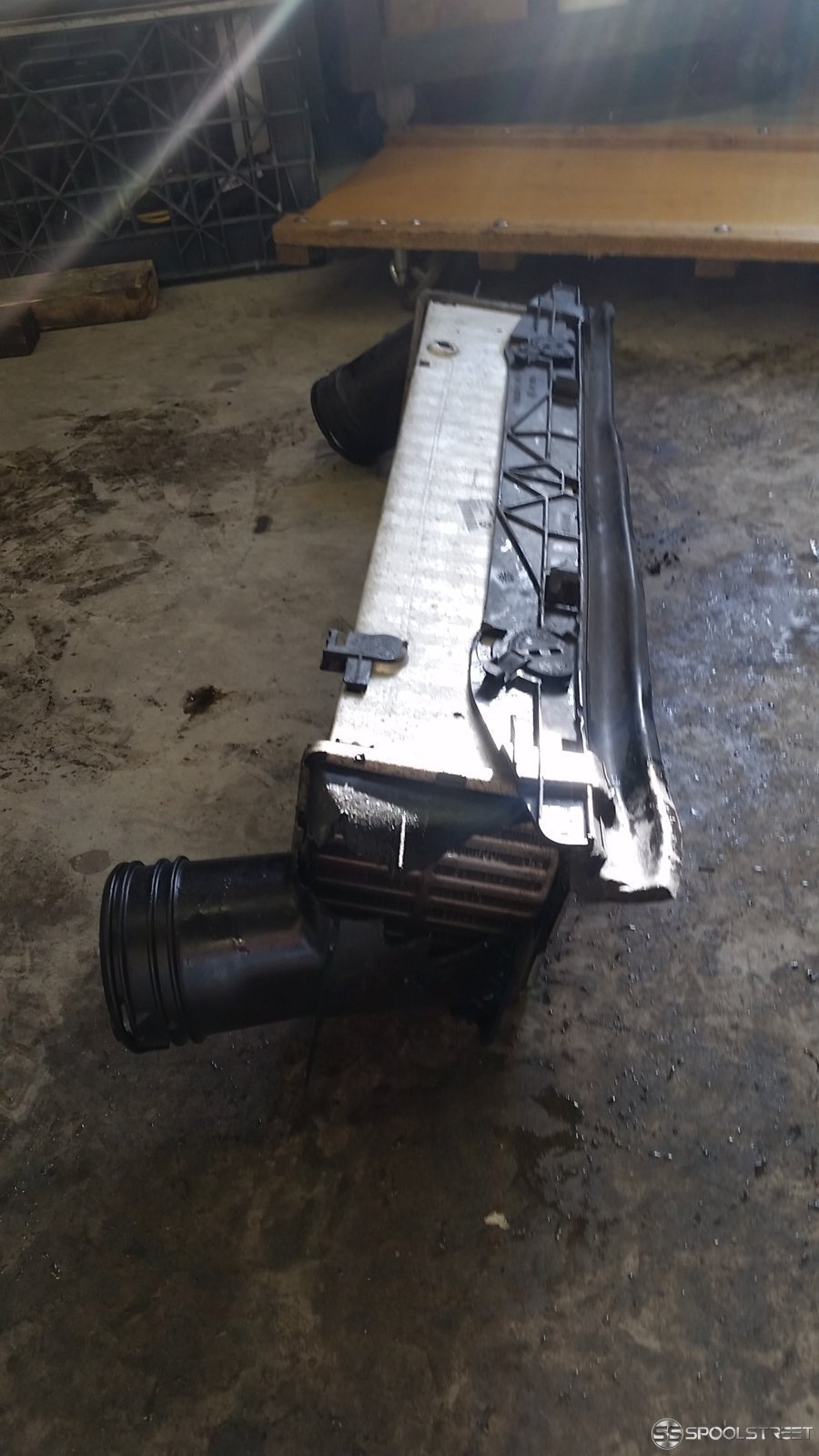 Can I get JUST the end tanks?

For now yup! The price will go to reasonable levels once this black car is running, then I'll focus on the part-out.

The black car did not have an OEM oil cooler, but the silver car did. So I swapped the non-cooled OFH over, and swapped the engine mount brackets (The xi uses different brackets than the e93). 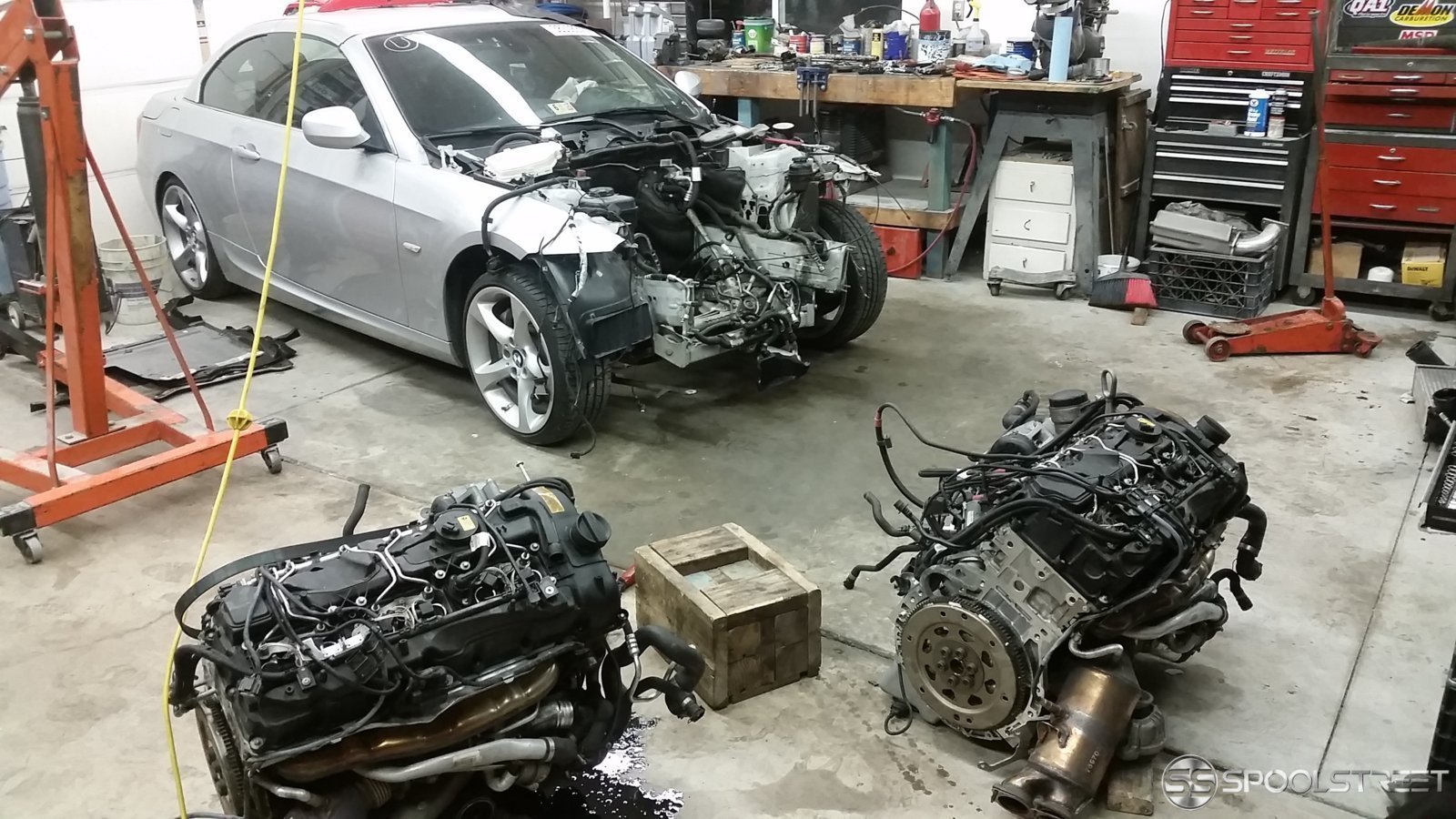