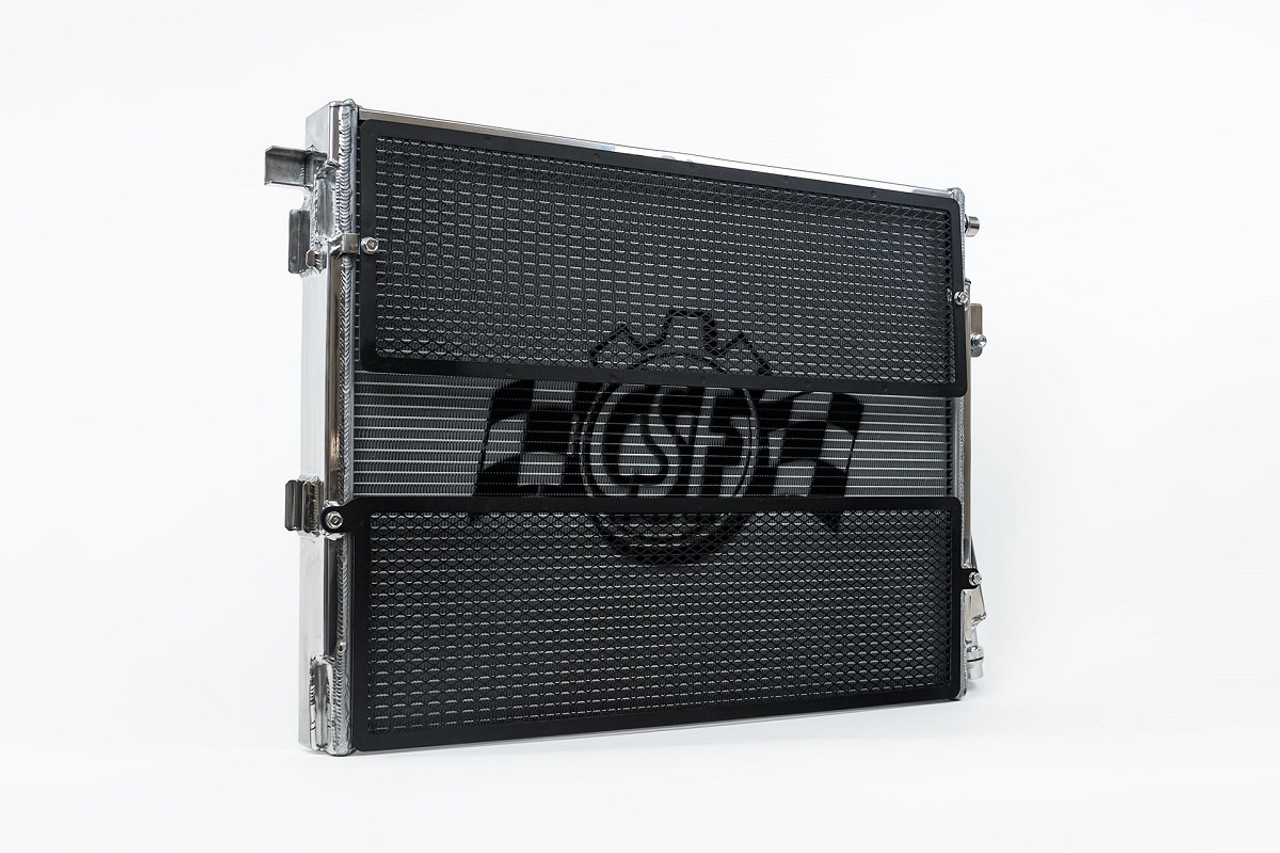 Arguably one of the hottest German performance vehicles of the decade, the G8X M3/M4 has quickly become a favorite among enthusiasts and race teams alike. Like most BMWs, the S58 motor has some serious heat issues under heavy driving conditions. CSF has been working tirelessly for the last year on a complete suite of industry leading cooling products for the G8X platform. Now, with over 9 months of development and testing, CSF is pleased to announce the release of its highly anticipated high-performance G8X M3/M4 Heat Exchanger (CSF #8215) for both 6-Speed Manual (6MT) & ZF8 Automatic Transmissions.

When the new M3/M4 was released in late 2020, it didn’t take long to see them hit the track. CSF’s Engineers and Motorsports department was in attendance for some of the first track days that local R&D Partners & Premier Dealers Studio RSR and Art of Attack took their new G8Xs to. The results were not all that surprising. Similar to the 2nd Gen B58 cars (A90 Supra & BWM G2X), the S58 had major issues with heat soak. This overheating of the intercooling system causes a large spike in Intake Air Temperatures (IATs). Subsequently, the ECU started pulling timing which decreases power output. In extreme cases this can also send the car into limp mode. This problem became even more prevalent as testing continued into the hot summer months.

As with most performance vehicles, power adders were some of the first product to be release for the new G8X platform. Bolt-on upgrades, software tunes, and upgraded turbos are all great for speed, but most of these only exacerbate the heat issues the car already has. Any time you add power to your car, you naturally increase the amount of heat the engine produces.

CSF’s industry-leading reputation and deep knowledge of high-performance BMW cooling systems allowed its engineers to immediately identify the cooling weak spots on the S58 engine. The engine is very similar to the B58 in the A90 Supra and G-Series BMW 40i models. Both feature a liquid-to-air charge cooler manifold paired with a front mount heat exchanger (water radiator). The Heat Exchanger cools the fluid cycling through the charge cooler, dissipating heat from the system.

Because the charge cooler is built into the manifold, it’s extremely expensive to replace with a high-performance unit. While CSF has developed a high-performance billet charge-air manifold for the S58 Motor (CSF #8233), the heat exchanger is still the most cost effective way to bring down charge-air temps. The Front Mount Heat Exchanger is responsible for removing heat from the chair-air cooling system and is now recommend as a critical bolt-on upgrade.
Design, Development, and Testing

With well over 100 track hours worth of testing and thousands of miles on the road, you can be assured that the CSF’s new High-Performance Front Mount Heat Exchanger has been thoroughly tested and vetted.

The CSF Heat Exchanger features a 2-Row (vs OEM single row) Core that is 42mm thick with CSF’s Exclusive B-Tube Technology. Increasing the size of the core and end tanks adds to the overall volume of the system which helps absorb more heat. The more efficient core not only helps dissipate more heat from the system, but also provides better airflow into the radiator that sits behind the heat exchanger. For vehicles equipped with the ZF8 Automatic Transmission, the heat exchanger core specifications were design concurrently with CSF’s new Race-Spec Dual Core Transmission Oil Cooler (#8221 – coming soon – see below for more info).

The two included Black Rock Guards offer full protection for the heat exchanger (above and below the crash bar), especially when paired with aftermarket “open face” race style grilles. These grilles have become quite popular for performance and aesthetics, and keeping your heat exchanger safe from debris is very important.

With the success of its B58 Cooling Program, CSF knew that the S58 would be the go-to engine for competitive motorsports for years to come. Planning ahead for future upgrades, CSF wanted to ensure the system was as efficient and reliable as possible. Ready for vehicles pushing 1000+ HP. Making a heat exchanger that is more efficient that the factory unit is fairly straightforward, but the engineering department wanted to ensure it went well beyond this benchmark knowing that an upgraded Charge-Air Manifold would be paired with many of these Heat Exchangers.
With CsF’s “Level Up” Charge-Air-Cooler Manifold

The final tests on the new CSF Front Mount Heat Exchanger were performed on Studio RSR’s G80 M3 track car after being fitted with the prototype S58 Charge-Air Manifold (CSF #8233).

CSF has also been developing and testing an upgraded ZF8 Transmission Cooler for the G8X platform (CSF #8221 – coming soon). Real world testing of the two coolers paired together have been performed to ensure the Heat Exchanger was not negatively effected by the additional capacity of the upgraded Transmission Cooler. As the transmission cooler mounts directly in front of the Heat Exchanger, CSF wanted to be able to ensure our customers that all the cooling components performed synergistically.

Be sure to stay tuned for updates about the release of the CSF S58 Charge-Air-Cooler Manifold, Transmission Oil Cooler, and other cooling upgrades including an engine oil cooler.CSF High-Performance Front Mount Heat Exchanger for BMW G8X M3/M4 ( CSF #8215 ): 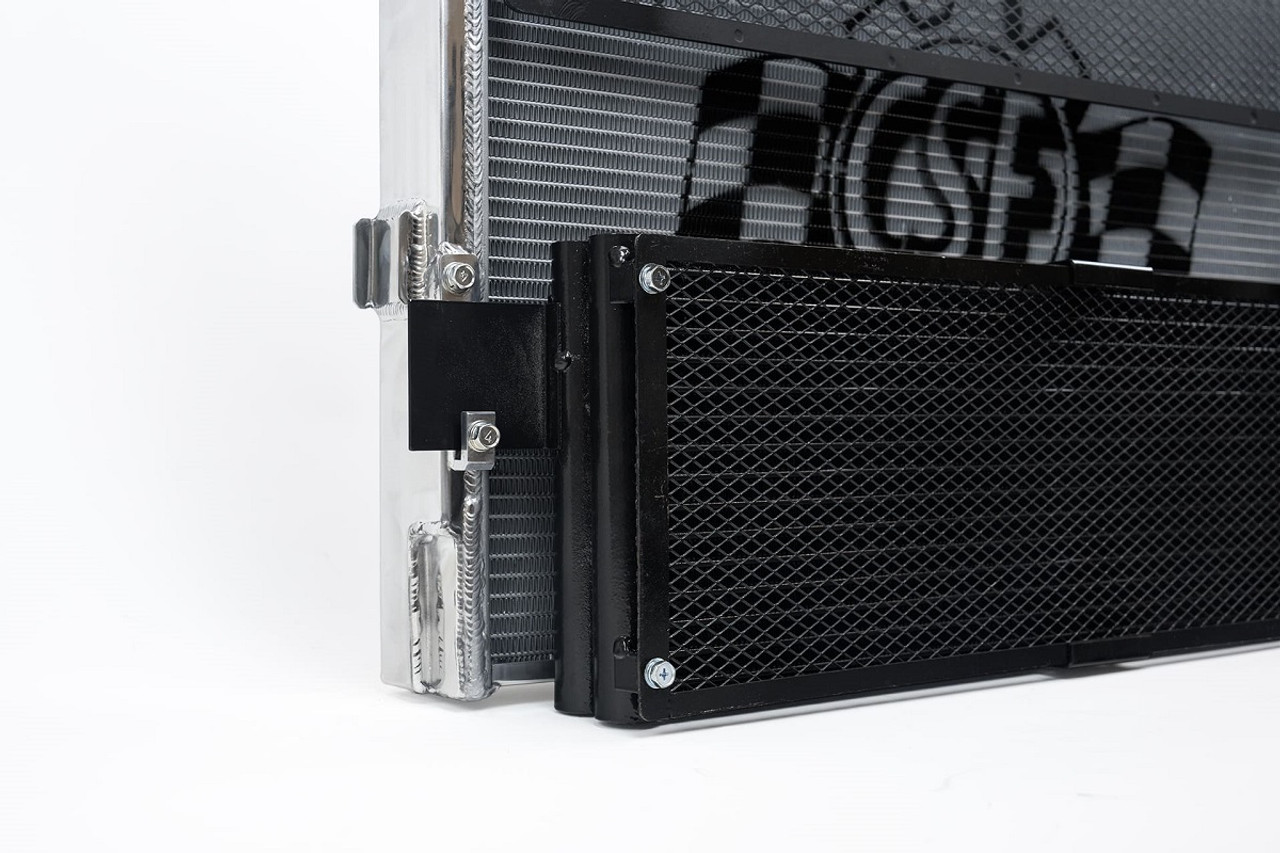 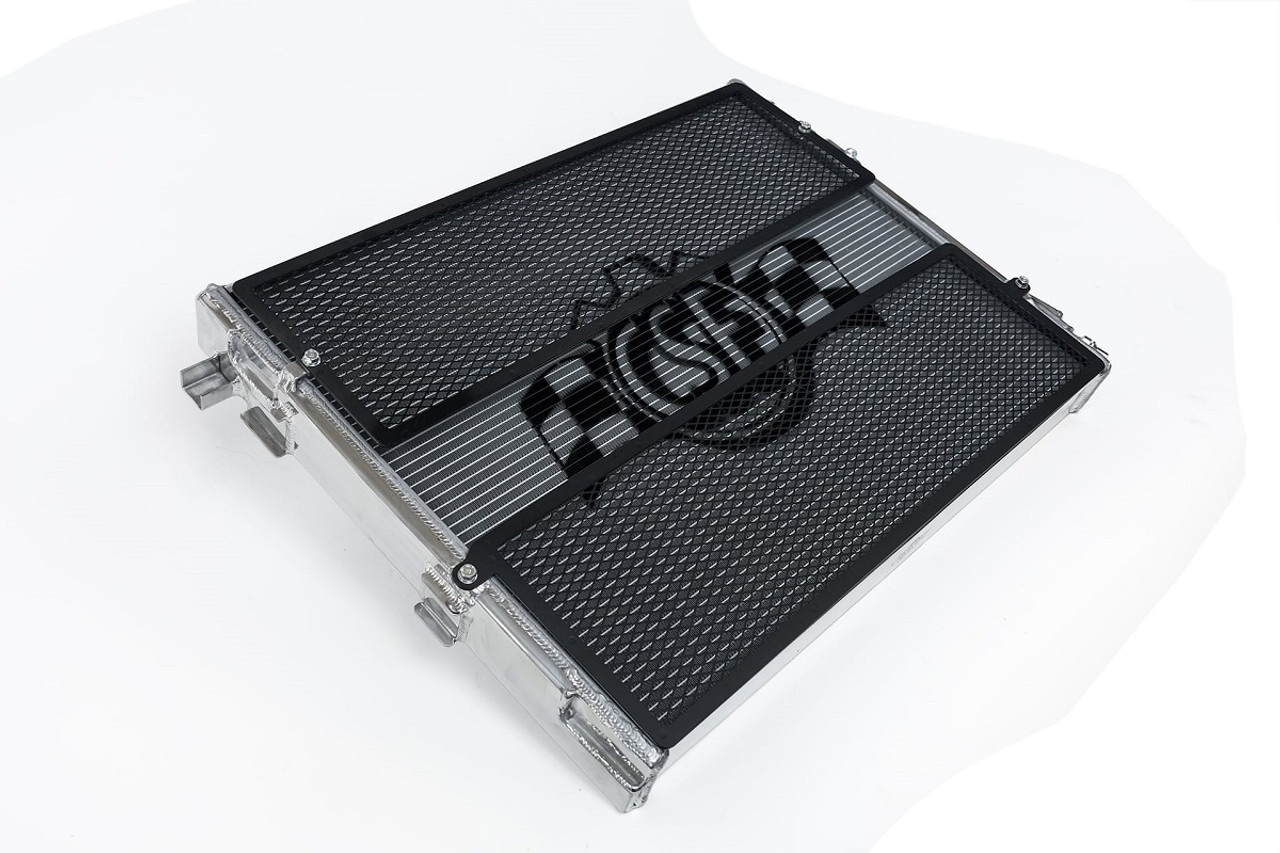 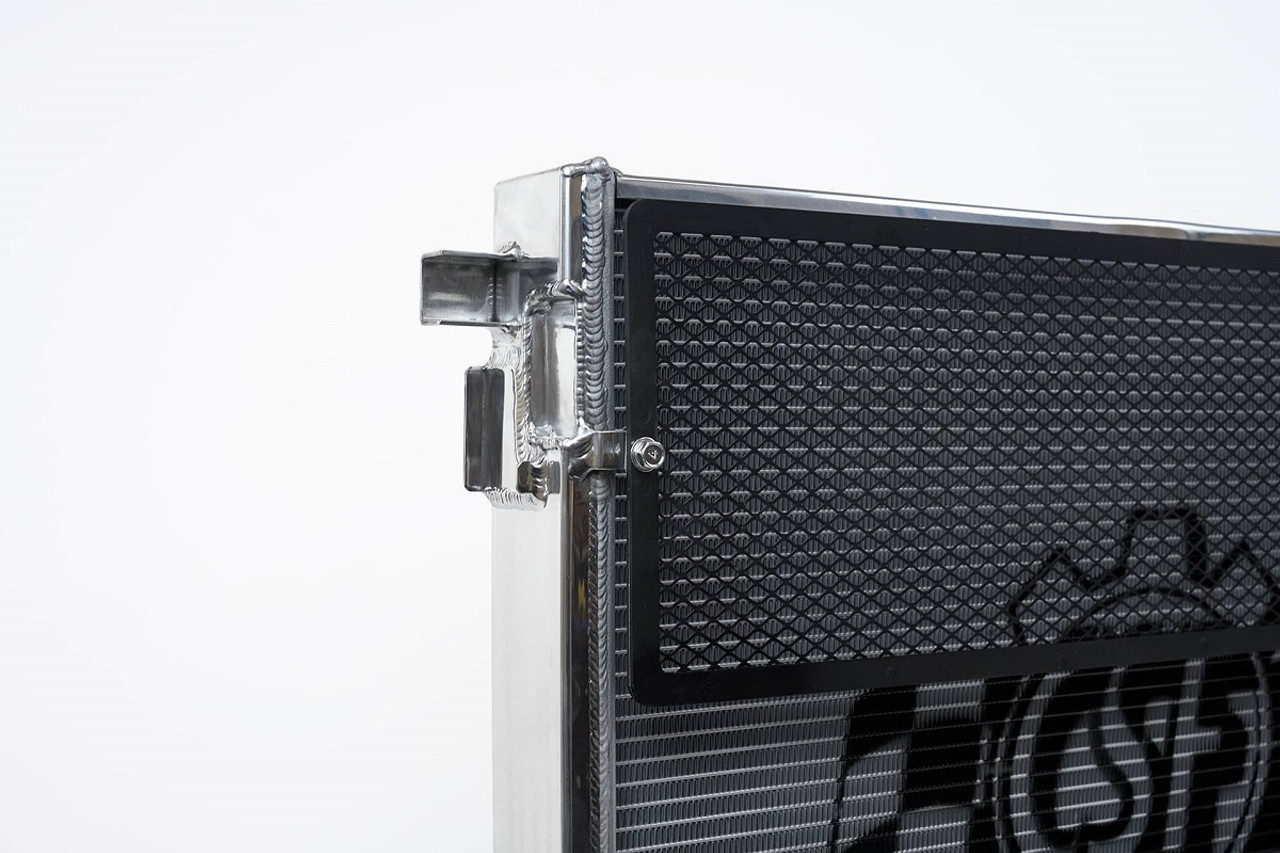 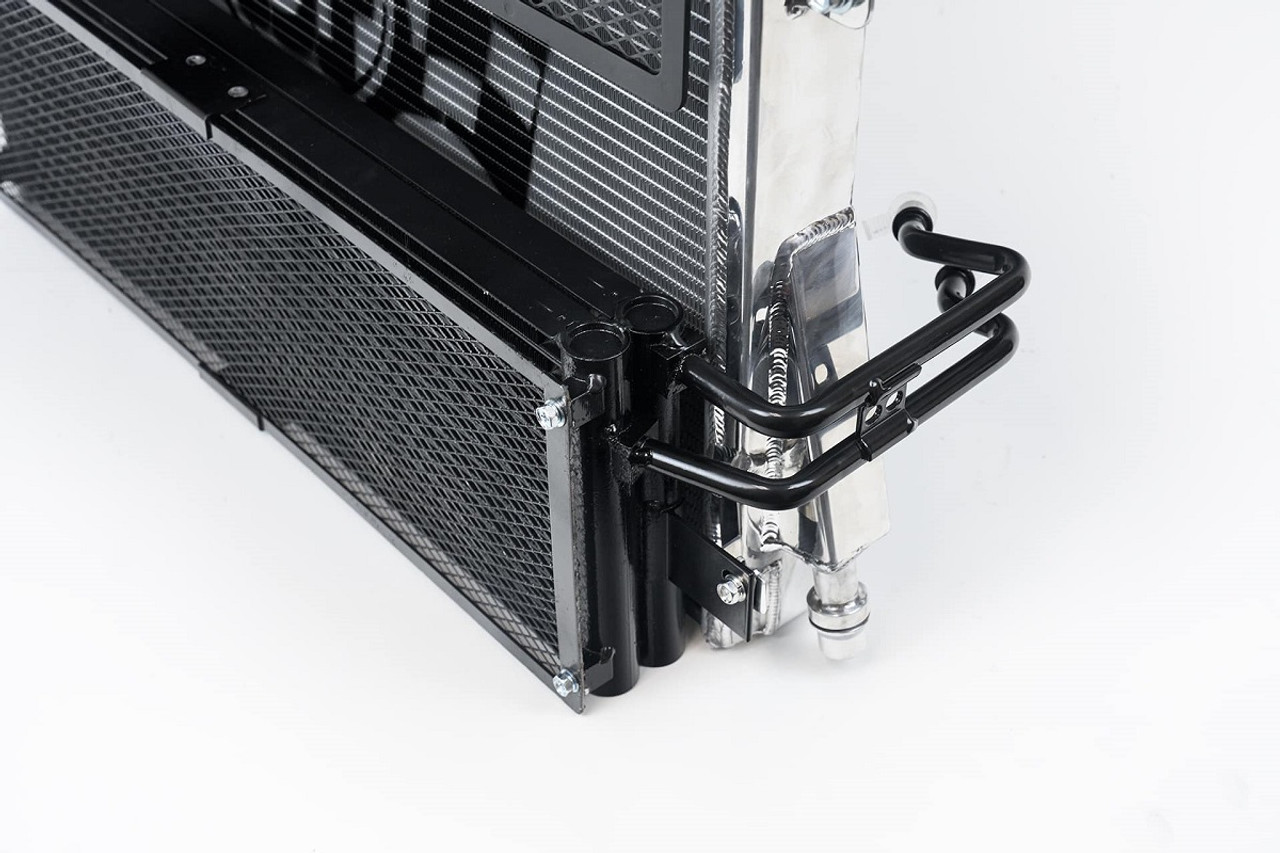 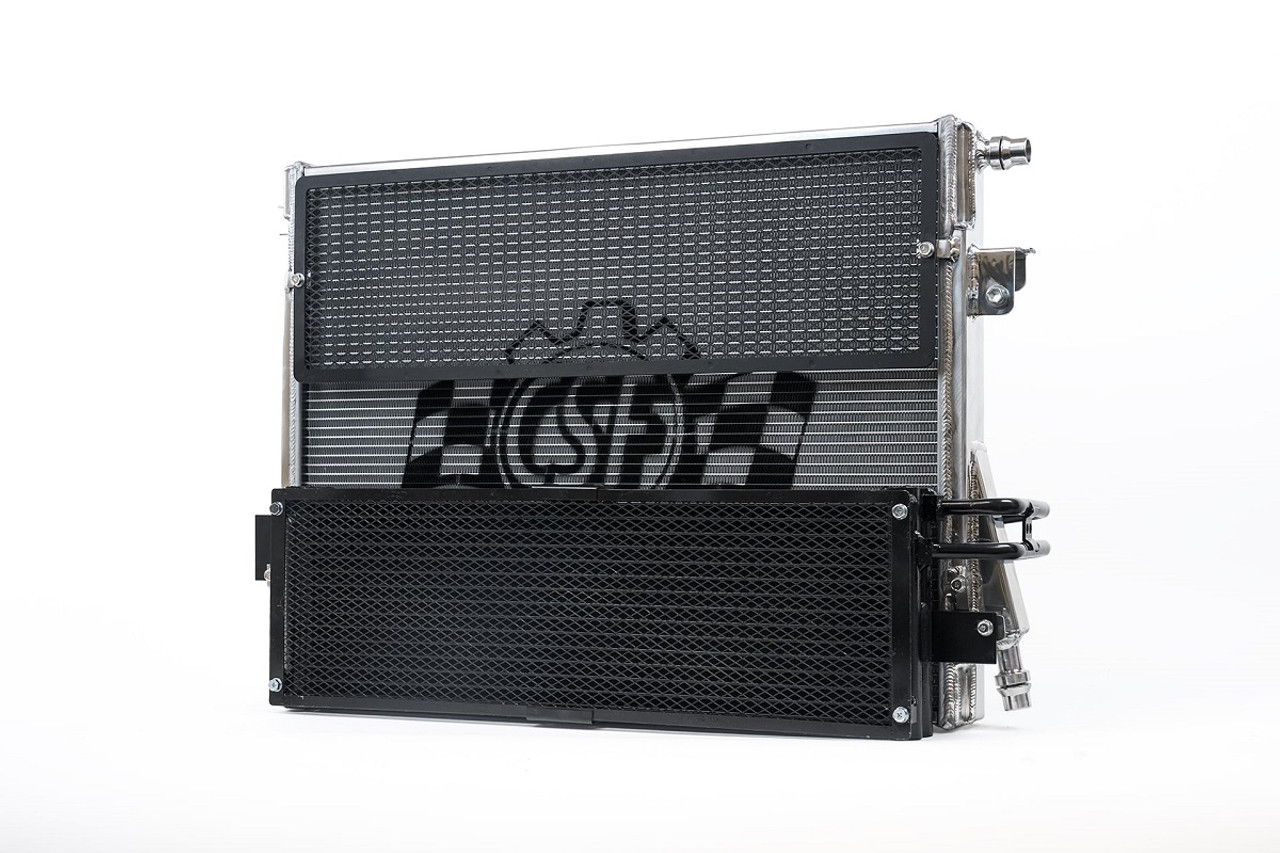 Reactions: OneStunDone and martymil
You must log in or register to reply here.