So I had started getting a bit of wheel hop in 3rd lately. More power, worn tires, cooler roads...whatever...it was just starting to become an issue. General consensus is a Diff Lockdown will resolve this issue and it just so happened that I stumbled across @stveclrk and his effort to make these. I'm always trying to support new up and coming entrepreneurs and this was an opportunity for me to do that.

I reached out to Steve and he had not test fit these on a DCT, so I offered up myself to be the guinea pig. A couple days later a package arrived in my mailbox: 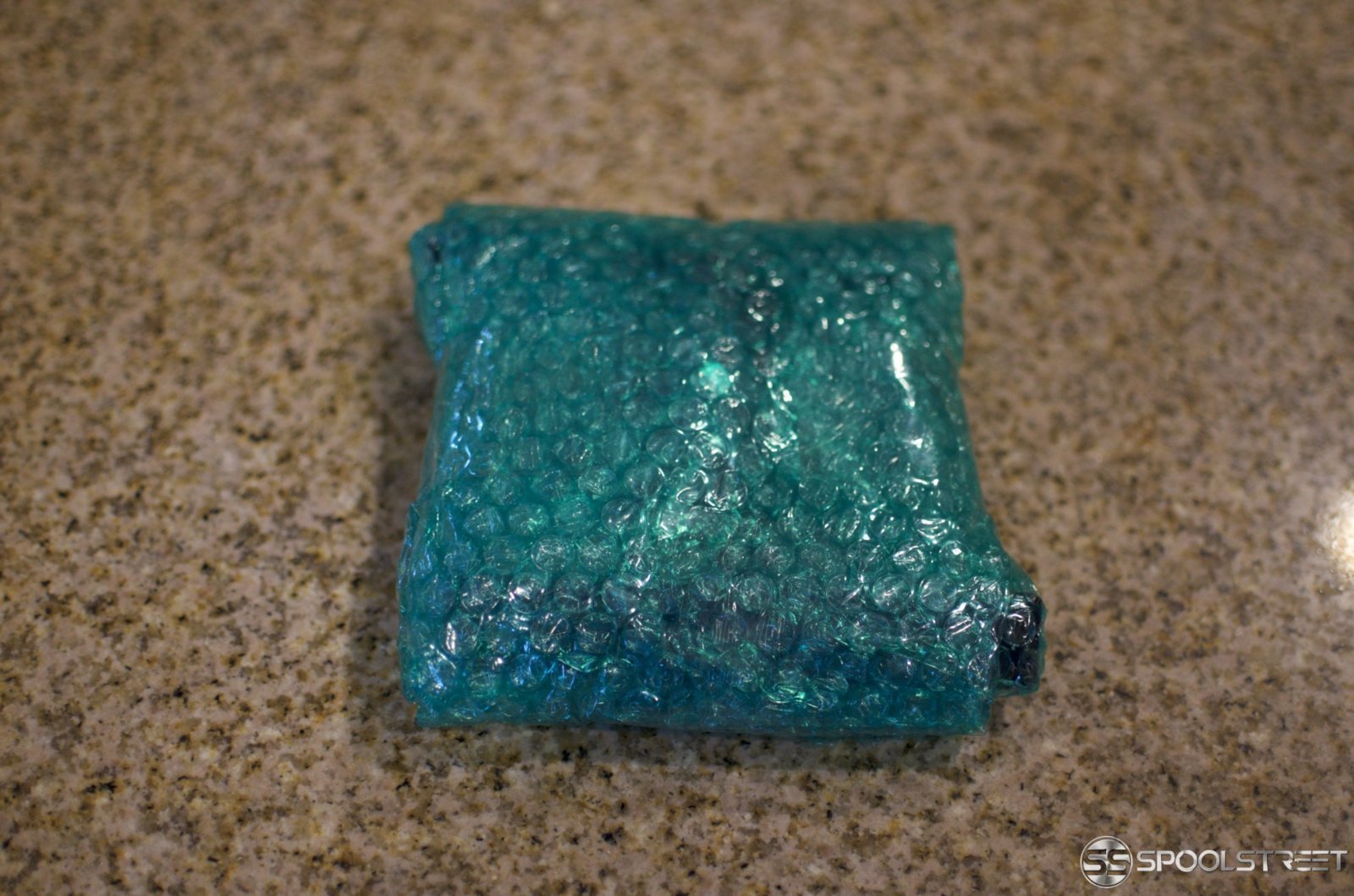 Like everyone else out there I like snazzy Apple inspired packaging. It's cool, shows attention to detail, polish, and finish. But lets face it, you pay for that. There's no real reason for it, and as a consumer I'd rather save the money. Steve nailed it here. Well packaged, efficiently, and most importantly not wasteful.

Unwrapping the bubble wrap we get a very straight forward bracket kit: 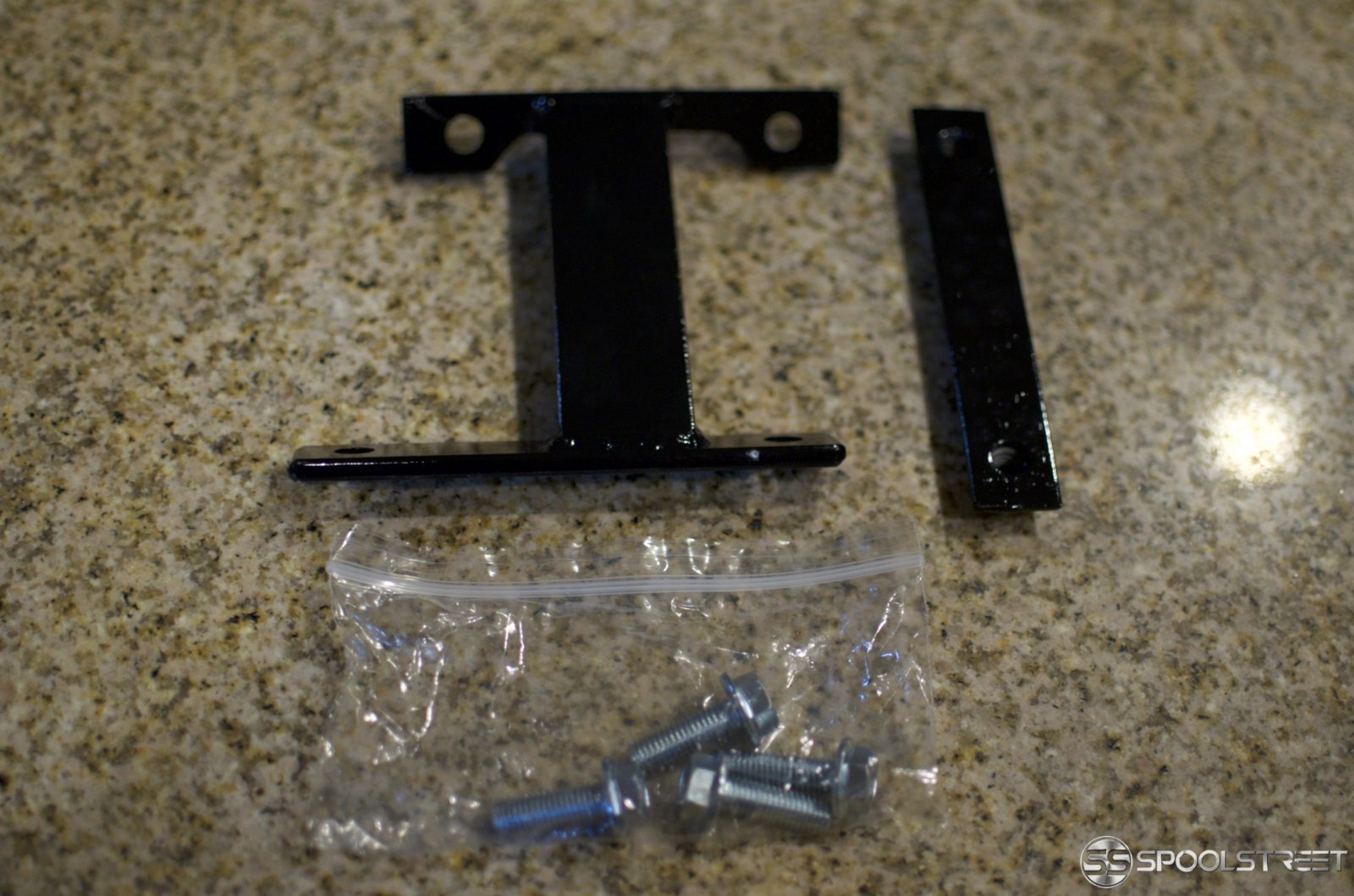 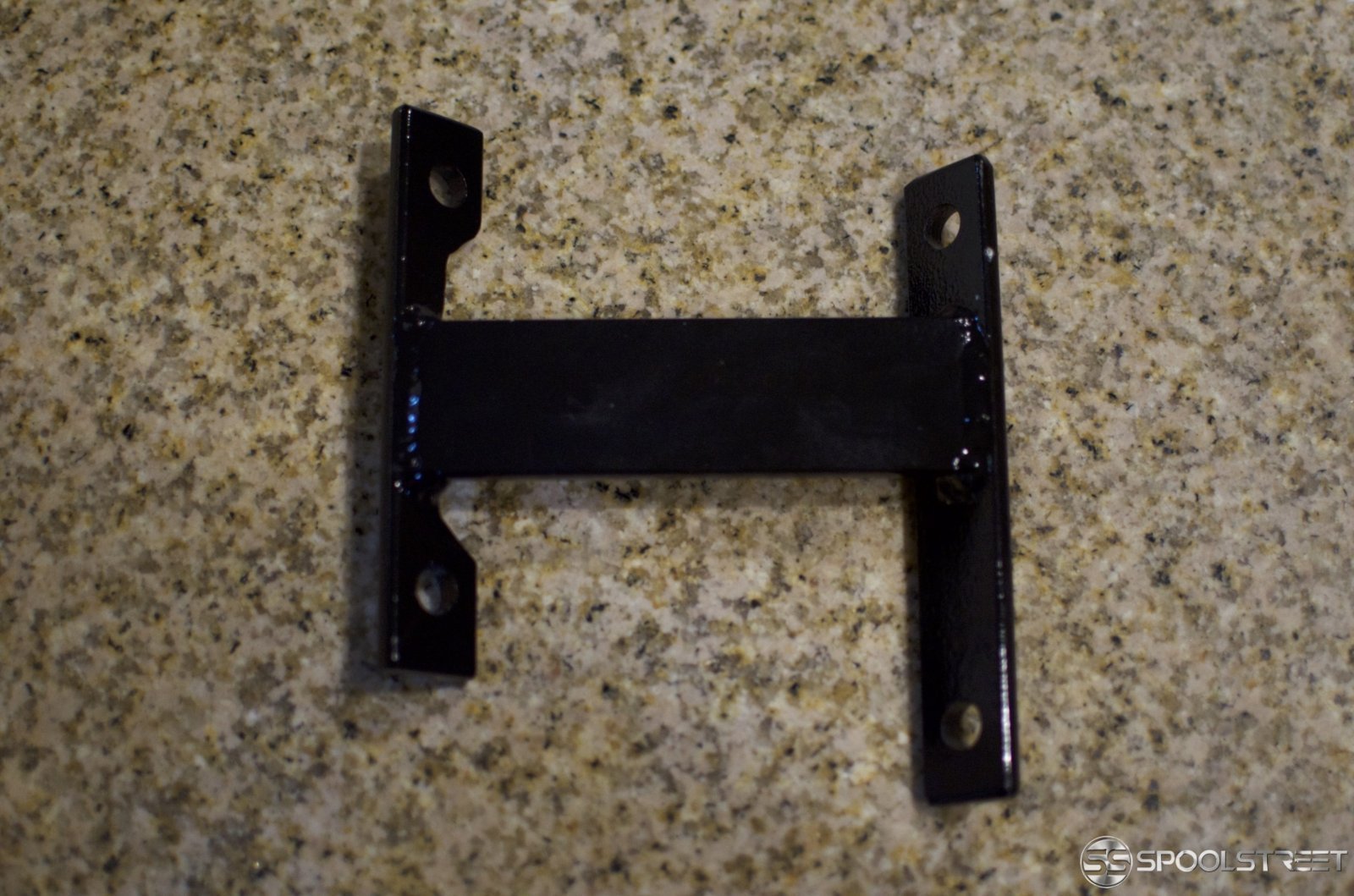 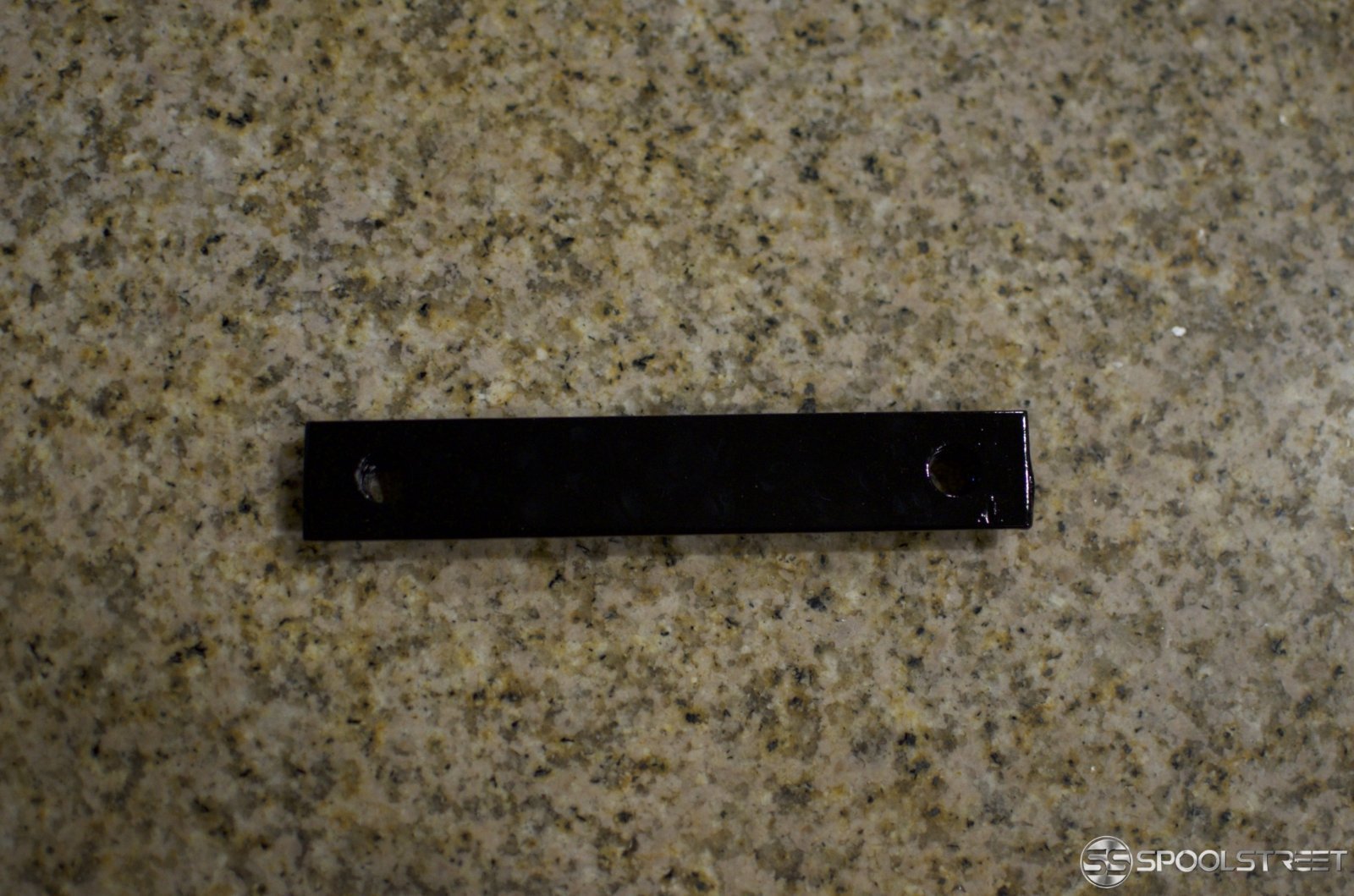 Hard to mess up a bracket like this from a fit and finish standpoint. And again, I appreciate the function coming before the form here. No unnecessary steps taken for spit and polish on a part that is just a piece of bracketry that will be under the car and never seen. The only thing was the paint was a bit "soft" but Steve said he has already corrected that for the next batch.

The captured nut bracket was awesome, made install a 10min affair.

Time to put the rear of the car on jackstands:

Man it's clean under there!!!! Hahaha. Sliding under I just held the bracket up and checked the alignment before I did anything else. 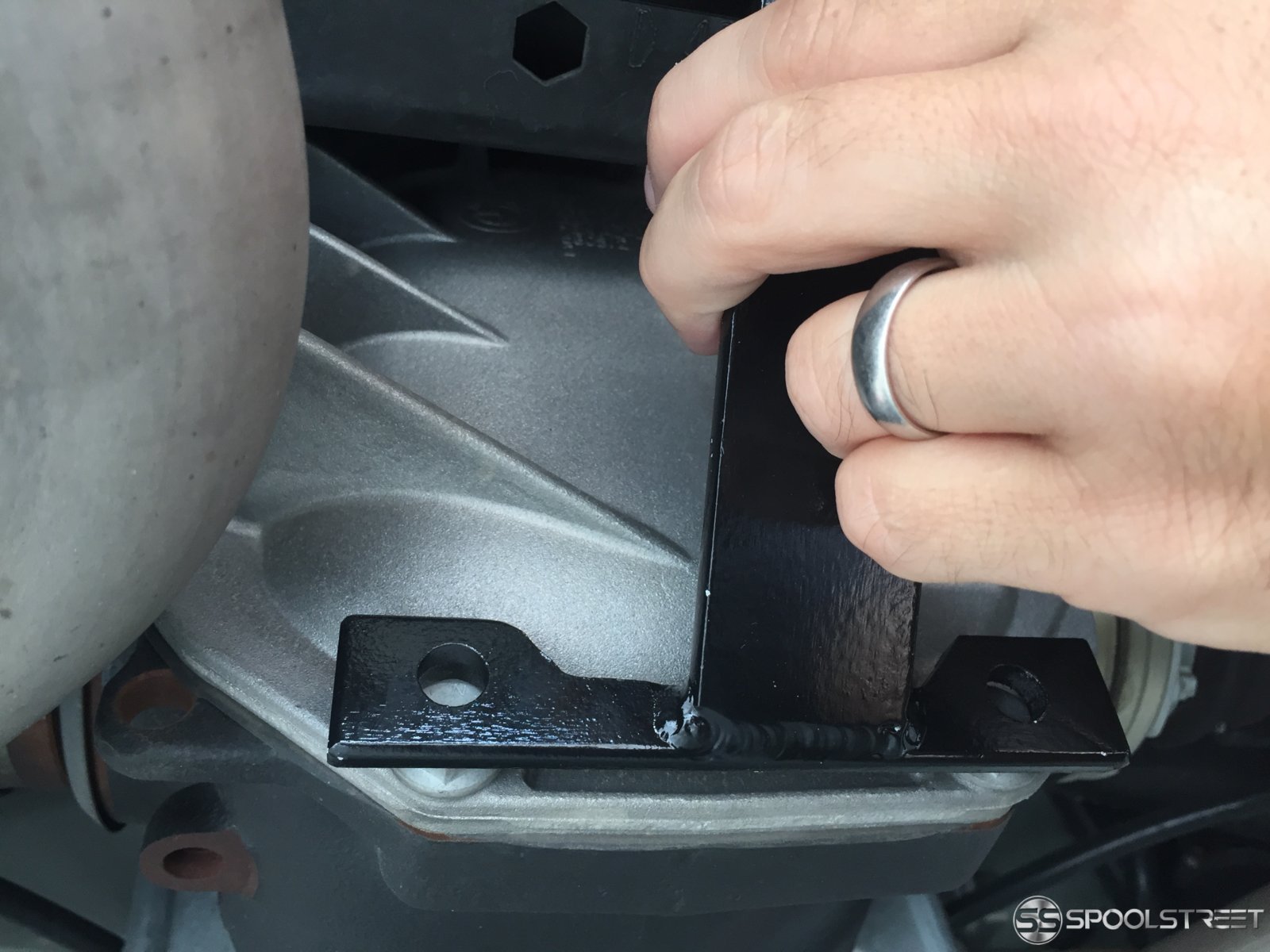 Looks G2G! Time to drop in the captured nut bracket into the subframe: 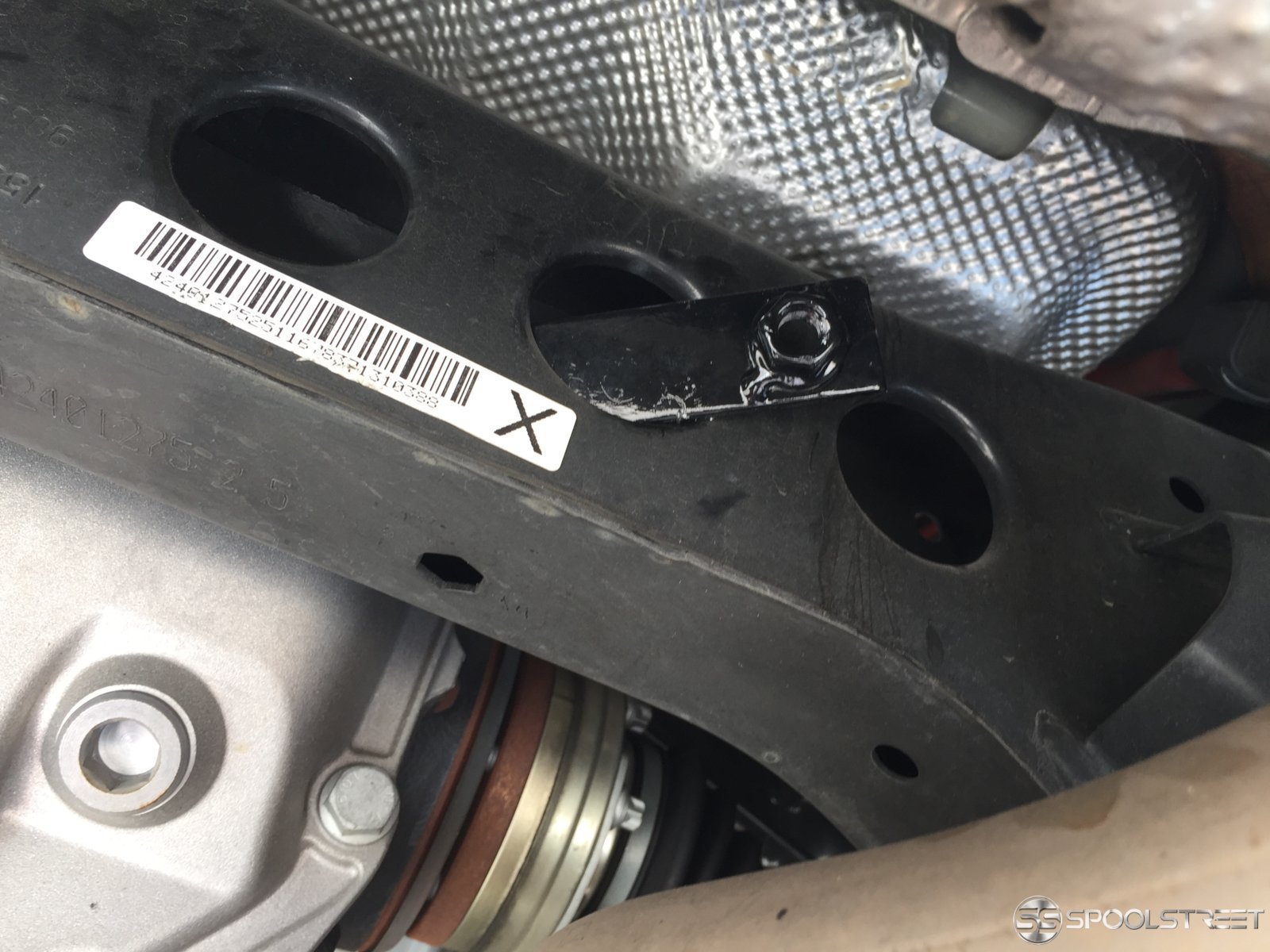 Double Check the alignment again (evidently I have shaky hands or something). But you can see the captured nuts in real life when your eyeballs aren't vibrating and your vision isn't as blurry as a Michael J Fox picture: 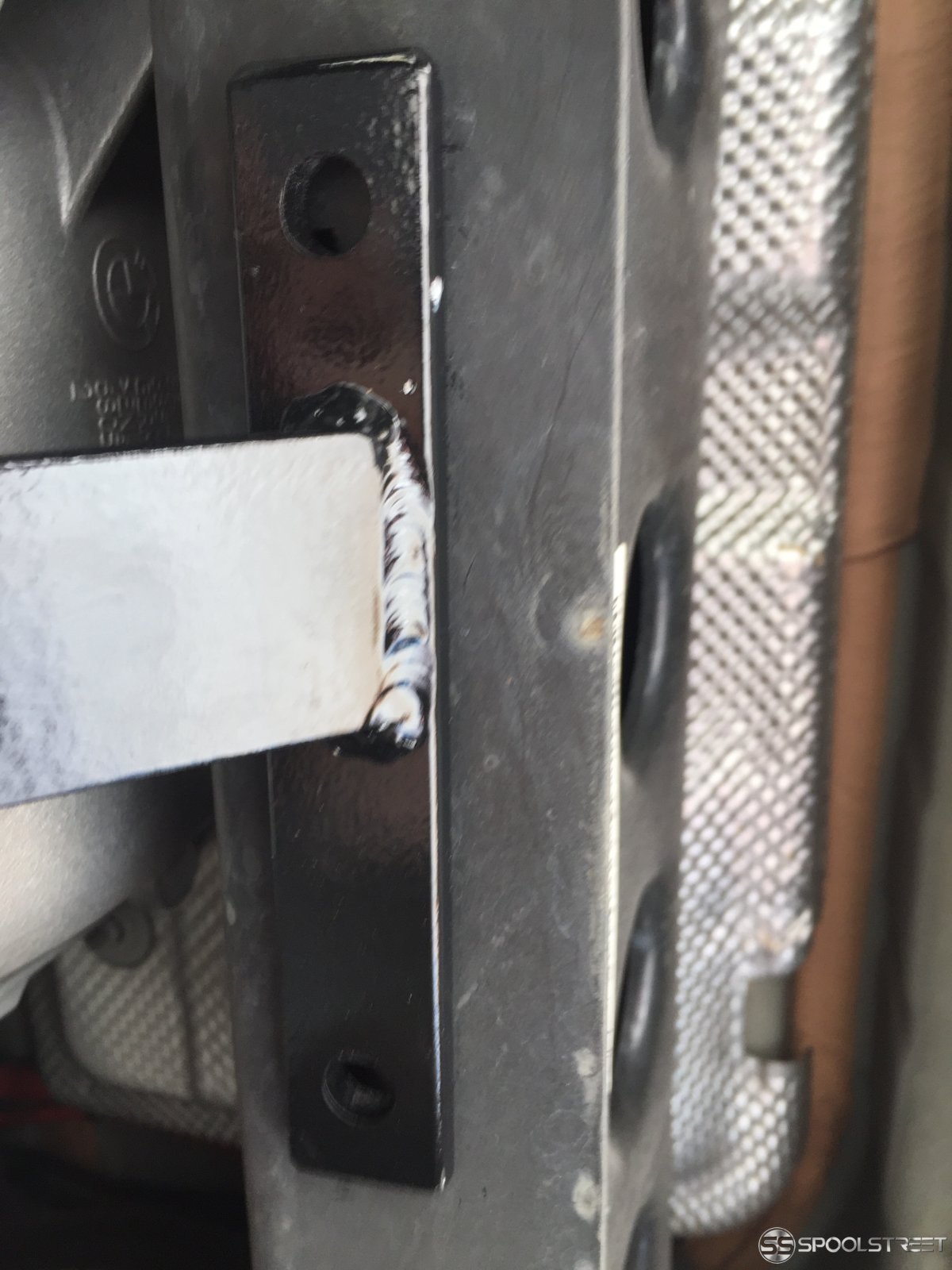 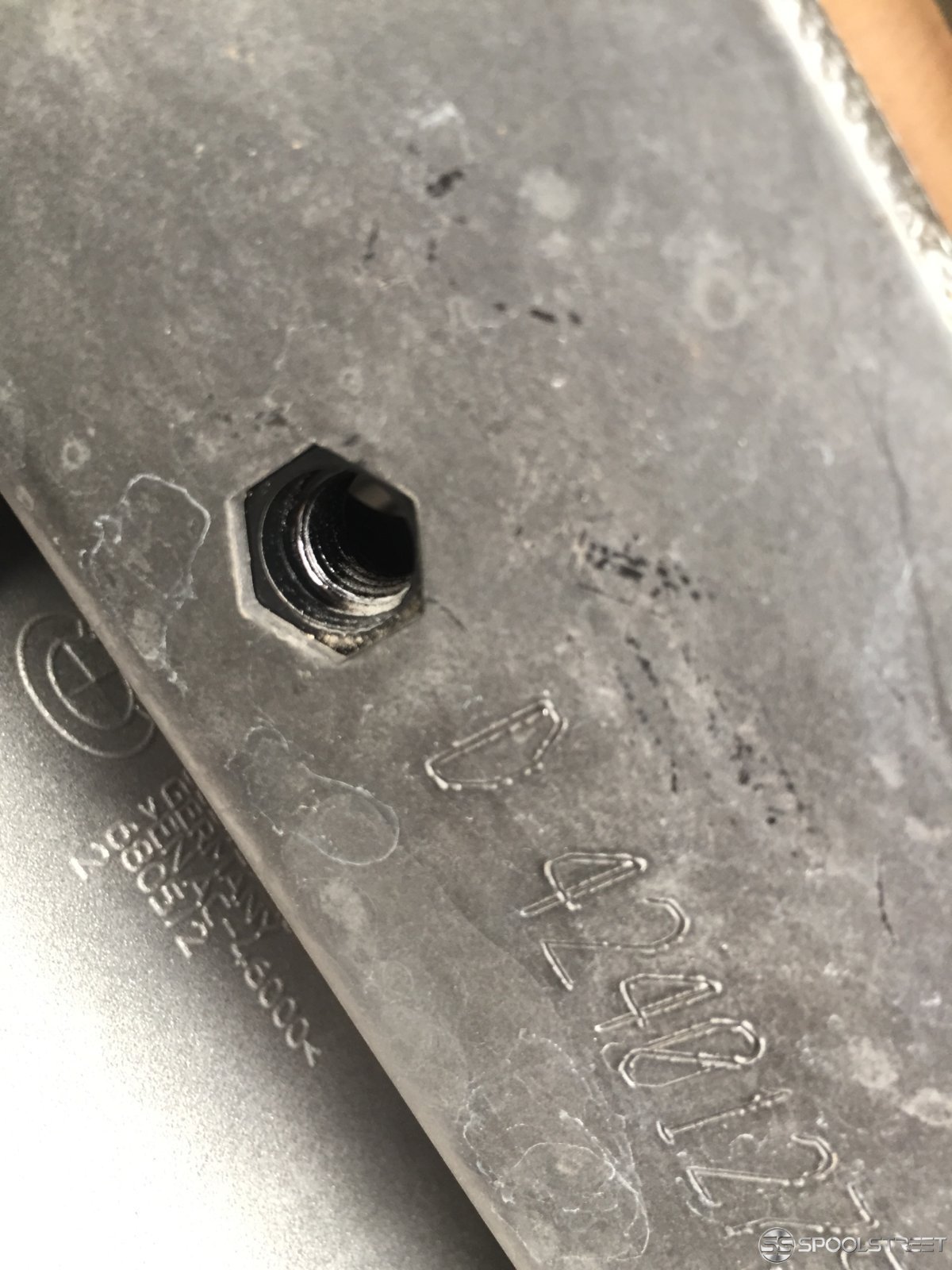 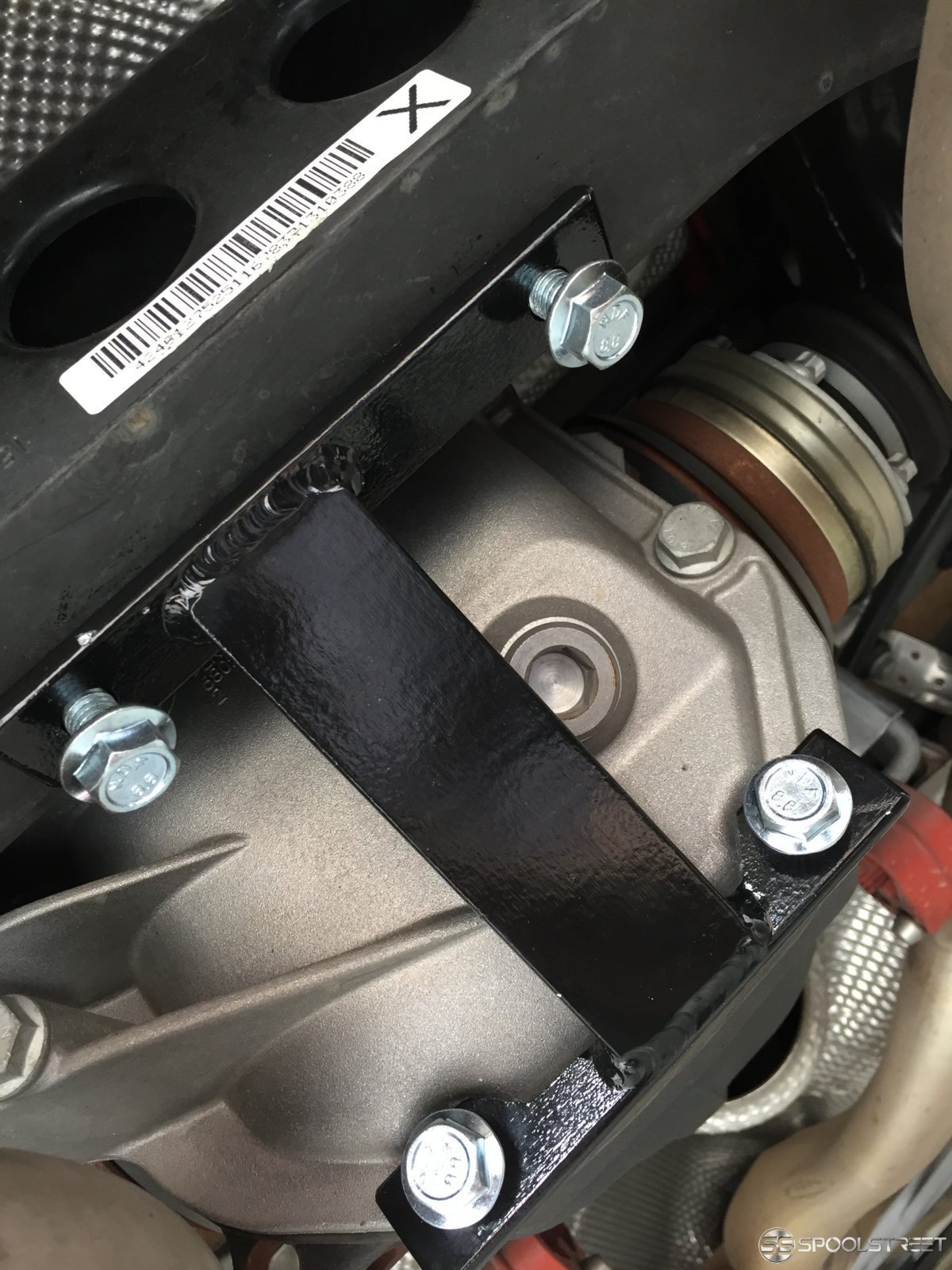 And wha-la! 10min after I started I had it installed. That simple really! 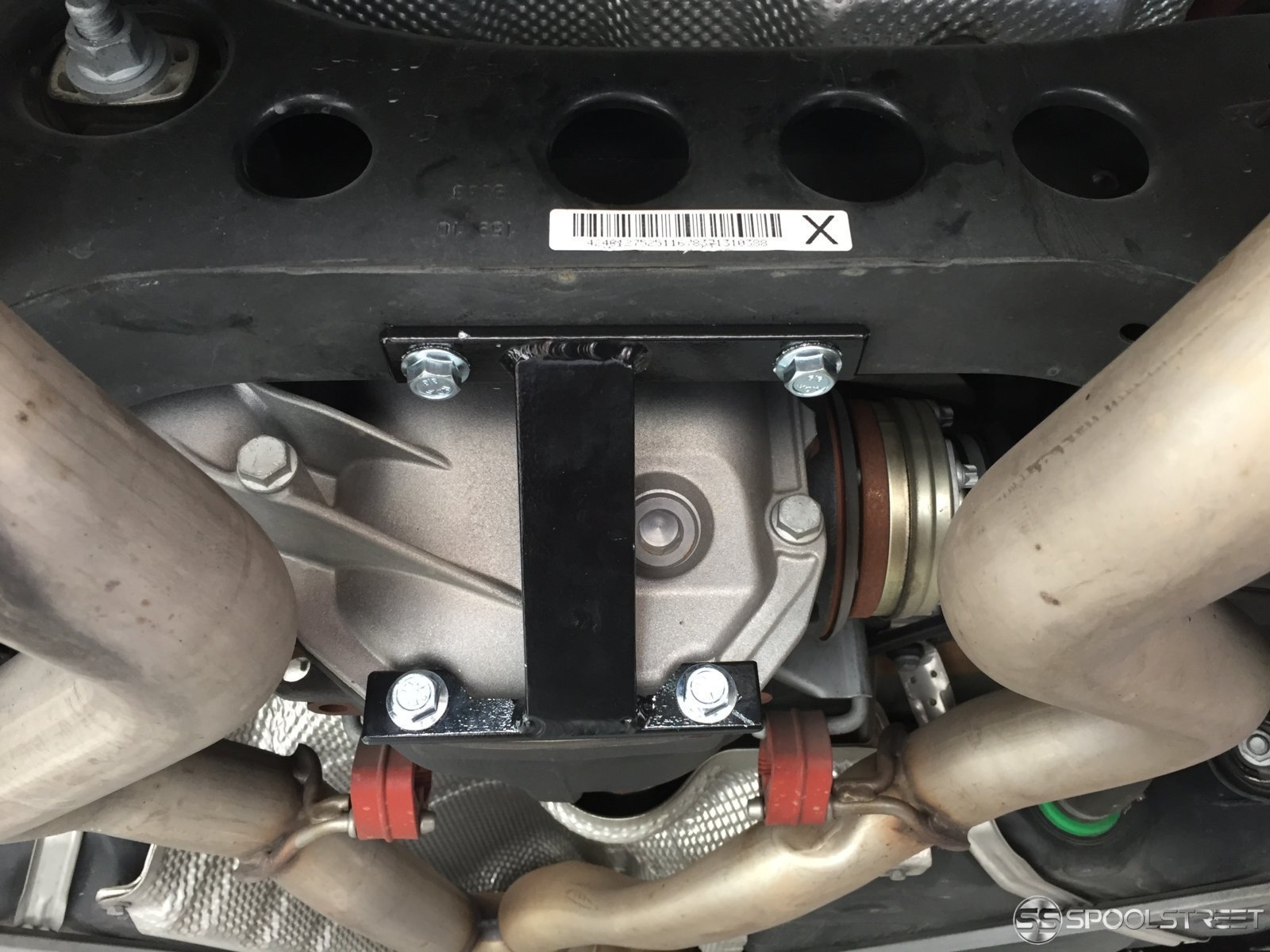 I am working with V8bait on tuning the car and needed to do some more logs for him so I went out and did another pull on the same road where I was getting some wheel hop before. Smooth as butter this time. No additional NVH, nothing to expose that this mod has been done. Wheel hop gone. Seems like an easy, low cost mod anyone should do who is experiencing hop.
Reactions: Jeffman, TX_335is, [email protected] and 3 others

Thanks for the awesome review and amazing pictures! I’m glad everything worked out for you and the wheel hop is taken care of!
E

stveclrk said:
Thanks for the awesome review and amazing pictures! I’m glad everything worked out for you and the wheel hop is taken care of!
Click to expand...

Is there a web site we can order these off of?

E89Revolution said:
Is there a web site we can order these off of?
Click to expand...

Its currently in development. You can message me directly up here for now and I’ll update the vendor thread when the website is live.

Wow, that car is clean!
I've had a different diff lock down kit on a UK DCT car for maybe 18 months. Definitely a good investment.

MoreBoost said:
Wow, that car is clean!
I've had a different diff lock down kit on a UK DCT car for maybe 18 months. Definitely a good investment.
Click to expand...

Thank you sir! I've got a full build thread in the 1 and 3 series forum, you can see how the car started off......I'll just say it was "less than clean"
D

When finished, it will fit the XI model as well, right?

dannyboy172 said:
When finished, it will fit the XI model as well, right?
Click to expand...

If you’re referring to the lockdown bracket I’ve already done fitment testing on the 335i Xi and it fits perfectly. I have a stock of both sizes in right now so just message me for orders and I can have it shipped out same business day. Thanks!
D

Any chance of a M3 DCT version for the guys who have retrofitted a M3 LSD?

I had a similar experience with my diff brace. Its a great investment for the 335is.

aus335iguy said:
I bought one from vwetish on another n54 techical forum
See pic
Click to expand...

Great write up, hoping to win one of these from the raffle this month!
Reactions: [email protected]

TX_335is said:
Great write up, hoping to win one of these from the raffle this month!
Click to expand...

Good luck! Glad to help out by sponsoring this month.

[email protected]kPerformanceFab said:
Good luck! Glad to help out by sponsoring this month.
Click to expand...

Thanks for developing good parts for the platform. Planning on ordering one if I don't win
You must log in or register to reply here.